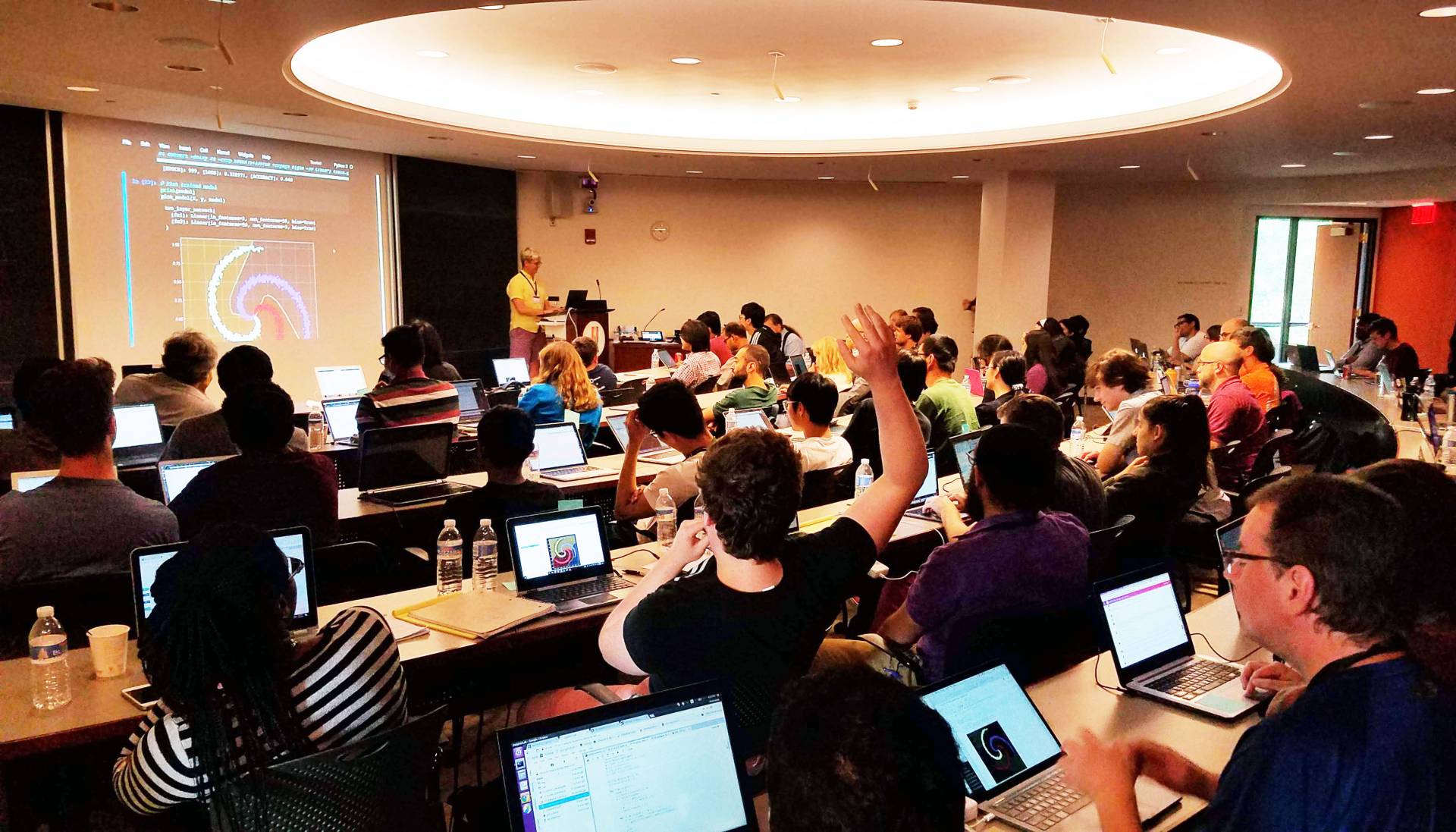 Graduate students attend the Computational and Data Science School for High Energy Physics (CoDaS-HEP) held at Princeton from July 23-27. At the podium, Alfredo Canziani, a postdoc at New York University’s Center for Data Science, speaks to attendees about machine learning.

On the Princeton campus this summer, 56 graduate students and 12 presenters from across the United States, as well as from France, India, Norway and Pakistan, gathered at the Princeton Center for Theoretical Science (PCTS) for the Computational and Data Science School for High Energy Physics, or CoDaS-HEP. “High energy” is synonymous with particle physics, a field focused on subatomic particles and their interactions.

The program, held from July 23-27, is a combination of lectures and hands-on training led by instructors from Princeton University, Cornell University, Fermilab, Intel, the University of California-San Diego, Lawrence Berkeley National Lab, Microsoft, New York University, and the University of Chicago. In its second year, it is supported by the National Science Foundation (NSF) and the Princeton Institute for Computational Science and Engineering (PICSciE), and co-sponsored by Princeton’s  Department of Physics and the Office of the Dean for Research.

Princeton computational physicist Peter Elmer, the lead organizer, noted that CoDaS-HEP sprang from the realization that training emerging researchers in the latest computational tools and techniques is essential to their future careers in both research and industry. To be successful, he explained, today’s graduate students in physics “require a mix of deep physics domain knowledge and advanced software skills.” 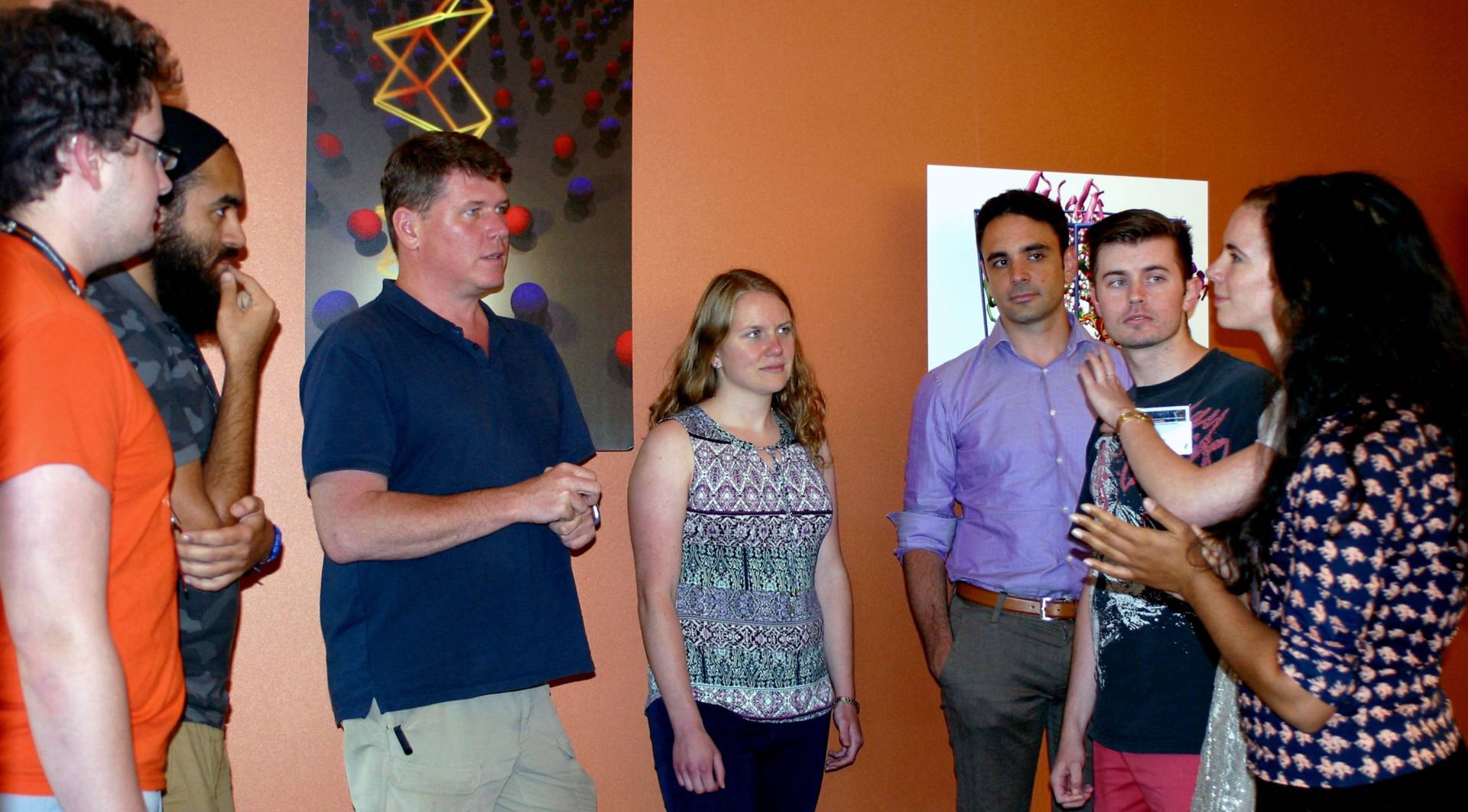 Tim Mattson, a senior principal engineer at Intel and a CoDaS-HEP instructor, agreed. “I cannot imagine being a physicist today without having deep knowledge of programming,” he said. “CoDaS-HEP is a crucial service to the physics community by teaching computing topics often skipped in a traditional physics education, from key tools such as Git for revision control to parallel programming and machine learning.”

Namita Shokeen heard about the summer school from an attendee last year. Shokeen, a doctoral candidate at Wayne State University, is studying the dynamics of nano and microscale particles in different polymer solutions using microscopic and spectroscopic techniques.

“I am really excited for the machine learning methods that I can apply to my current research,” Shokeen explained. “I’m having issues in reconstructing the particle trajectories in particle tracking. A few of the CoDaS-HEP lectures, such as Slava Krutelyov’s talk on charged particle tracking, relate directly to my work.”

Programs like CoDaS-HEP “act as a bridge to fill the generation gap that some physicists have,” she added. “My undergraduate work did not prepare me for the computational science demands of graduate research in physics. This is a great way to learn more about the current needs of computational methods in physics. I would definitely recommend it to other graduate students.”

Elmer sees a rapidly growing need for this program and others like it. “Ultimately my aim would be to ensure that every U.S. graduate student in high energy physics has the opportunity to learn these computational skills,” he said. “It will help them all individually, whether they stay working in high energy physics or go elsewhere — and some of them will also wind up contributing to the common shared software tools used by the whole community.”

Thanks to generous support, Elmer continued, opportunities should expand to fill the need. “NSF originally provided the funding for the CoDaS-HEP school as a small training component within a larger R&D project. This covered the school in 2017 and 2018.

“Earlier this year, Sudhir Malik of the University of Puerto Rico, Ian Cosden of Princeton Research Computing, and I submitted a dedicated three-year proposal for half a million dollars to the NSF cybertraining program. We recently learned that our dedicated training proposal was funded and will allow us to continue not only the CoDaS-HEP school for another three years, but also pursue and develop a broader program of computational training with the U.S. and international HEP community.”

Thus far, said Elmer, “with some careful budgeting, and some help from PICSciE, I have been able to accept all qualified students who apply. But I made exactly one announcement about it on various mailing lists of the school, so I'm certain that if I had promoted it more widely, I would have received many more applications. Clearly, one challenge in the coming years will be scalability.”