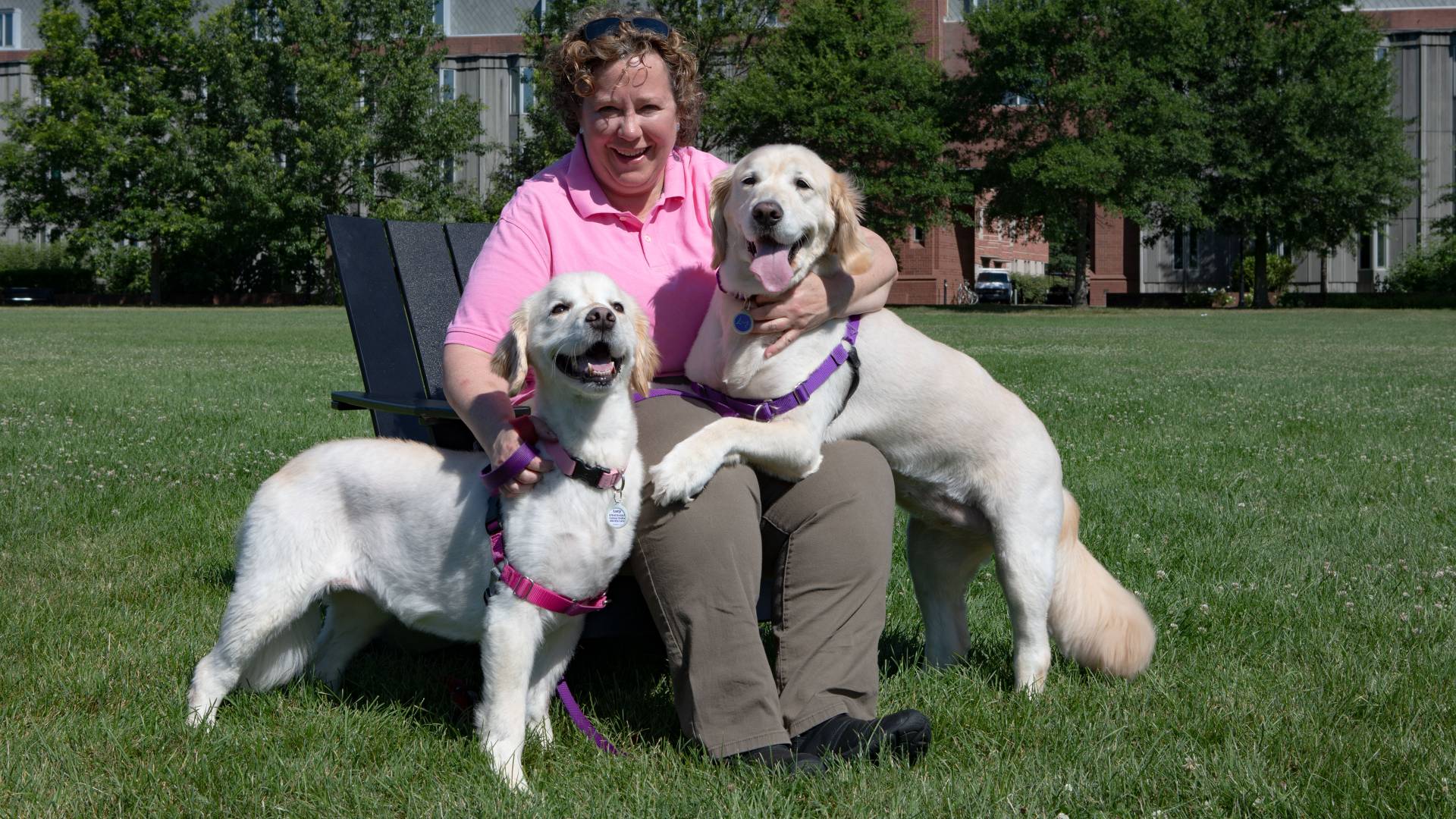 Laura Conour, the veterinarian responsible for the care of Princeton's research animals, sits with her two pet golden retrievers, Lucy (left) and Zoe, on Pardee Field.

Laura Conour has taken care of Princeton’s research animals since her arrival in 2011.

She is a board-certified veterinarian through the American College of Laboratory Animal Medicine, and as the executive director of Laboratory Animal Resources, she is responsible for the health and welfare of all laboratory animals at Princeton. Animal health is at the core of the animal care and use program, which ensures the University’s compliance with all animal care regulations and Princeton’s accreditation with the Association for Assessment and Accreditation of Laboratory Animal Care (AAALAC). Conour is also a research scientist in her own right, holding the title of senior scholar at the Princeton Neuroscience Institute (PNI).

Why do you work with research animals?

Because in my own way, I make a difference. I get to love and work with the animals.

Some people, when they need a break, they go get coffee, or go to the break room and chat with their colleagues. If I need a break, I go hang out with the monkeys for 30 minutes. I go feed them grapes and call them by their names and scratch the ones’ backs who want to be scratched, and that’s — that’s why I do it.

When I meet new researchers, I tell them I have three responsibilities at Princeton. My first and foremost responsibility is to the animals, to ensure that they are cared for and used in research in a manner that’s humane. My second priority is to Princeton, to make sure that we have a fully compliant, successful program of research. And then the third is to the researchers, so that they can get their world-class research done.

It’s definitely got a higher calling. I’m taking care of animals to potentially cure diseases — or lay the foundations for future cures. Princeton doesn’t have a medical school or dental school or veterinary school, so the level of research we do is much more basic and discovery-based. You can’t develop wonderful drugs unless you do the basic research. 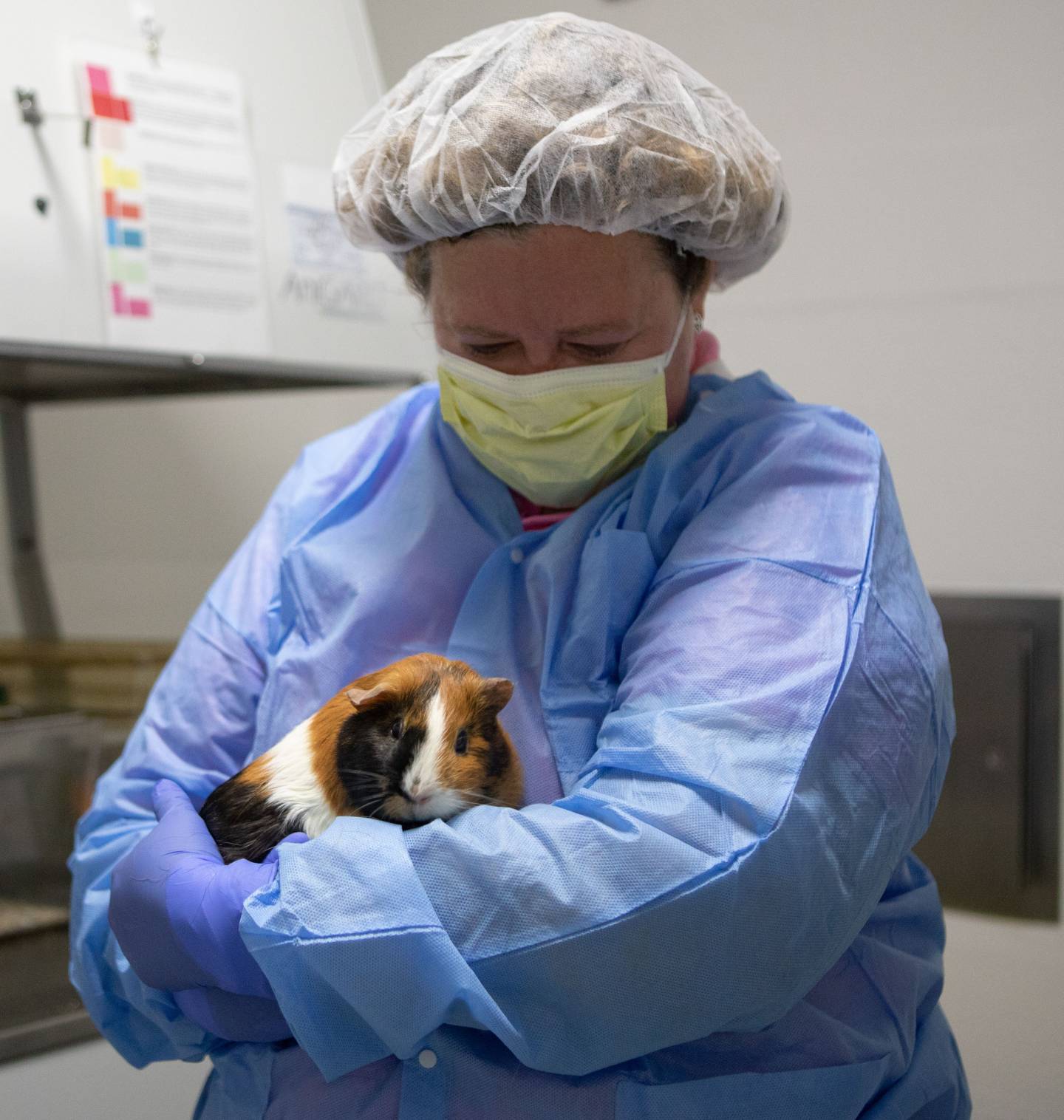 Conour, the executive director of Princeton's Laboratory Animal Resources, holds Molly, a 2-year-old guinea pig whose odor is collected for use in mosquito research.

How many animals does Princeton have?

Off the top of my head, we have at any one time about 3,000 mouse cages, holding one to five mice each. We have thousands of zebrafish. We have frogs, three holding rooms of xenopus frogs. We have two guinea pigs: Molly and Mia. My staff named them. We have aplysia, which are sea slugs. They eat red spinach and red algae, and they’re used in the PNI teaching labs.

One of the big efforts in using animals in research is to follow the three Rs: replacement, reduction and refinement. The “replacement” idea is that, if you can, you first use a lower animal model, so a rodent instead of a non-human primate, maybe a fish instead of a rat — the idea is that you’re coming down on the phylogenetic scale. If you can use an invertebrate model, that’s considered replacement of a vertebrate animal model. We’re a long way from totally replacing animals in research, but I think that it’s a good goal.

Do you ever work with non-lab animals?

I can do “drive-bys” when non-research animals are brought on campus, to check on them. So, when therapy dogs are brought to campus during exam weeks, I’ll make sure the people bringing the animals in are giving the dogs sufficient rest times and water.

What’s one of the funniest moments you remember on the job?

The first night we moved the monkeys into their new rooms in our amazing new building, we took all-night shifts to make sure that everybody was okay through the night. About 1 a.m., I walked the rooms, and the lights were malfunctioning: Bright lights on at 1 o’clock in the morning, and I couldn’t get them off for the life of me.

Monkeys like to sleep at night like we do, so I called my associate director, and about 15 minutes later, there she is in her pajamas and glasses, and we’re on ladders in the middle of the night, taping garbage bags over lights so the monkeys can get their rest.

For us, it was all about the fact that we brought them into a new space and wanted to make it as low-stress as possible, and as much as we tested all the systems, sometimes you can’t predict what’s going to happen until you get in there. I can remember thinking, “My associate director is here in her pajamas, and I’ve had the longest day on record, and we’re on top of ladders taping garbage bags over lights!”

How would you describe the standard of animal care at Princeton?

Princeton University is AAALAC accredited, which already goes above and beyond what is required by the Animal Welfare Act. AAALAC accreditation is kind of the Good Housekeeping Seal of Animal Research Approval.

Princeton realizes that there’s a significant responsibility in having an animal research program, and we’ve devoted a lot of resources to it. For one thing, most of our animals are in this absolutely state-of-the-art animal facility.

We’re unique in that we provide a 37-foot-high enrichment room with windows for natural daylight — it’s like a play room for monkeys. We get a lot of kudos from AAALAC and the U.S. Department of Agriculture for that space. The National Institutes of Health used photos of it at a research animal workshop last year.

Do you have pets of your own?

I have two golden retriever sisters, Lucy and Zoe. Veterinarians tend to collect special-needs pets. Lucy has pretty severe congenital hydrocephaly — she was born with water on her brain. And then we have a cat that adopted us a few years ago, Petunia. She turned out to have special needs as well, but she rules the roost.

What’s your favorite part about working at Princeton?

All the people. I love brainstorming with the researchers, and the administrative staff are a tight-knit group. I have a staff of 23, because it takes a village, it really does. It takes everyone from the caretaker who’s cleaning the cages and feeding and watering the animals, to the veterinary technicians making sure they’re healthy, to the vets, to the compliance person keeping an eye on everything — and then for the researchers, it’s the whole range, too: the undergrad, the graduate student, the postdoc, the principal investigator, the research technician, the lab manager. These people love these animals, and they care about what happens to them.

How did you get into this field?

I was one of those odd kids who always knew she wanted to be a vet, so I’m doing exactly what I always wanted to do. Being a lab-animal veterinarian, it’s a marriage of research and veterinary medicine. It was the perfect combination for me.

For me to be able to do exactly what I wanted to do in life is a huge privilege, and the fact that I do it at Princeton University makes it all that much sweeter, it really does.

Princeton investigation finds no evidence to back animal research allegations