The choices that people collectively make at dinner time — more burger, or more broccoli? — will impact the future of our warming planet. That’s because red meat consumption is widely recognized as a significant driver of a range of environmental woes, from climate change to deforestation and biodiversity loss. 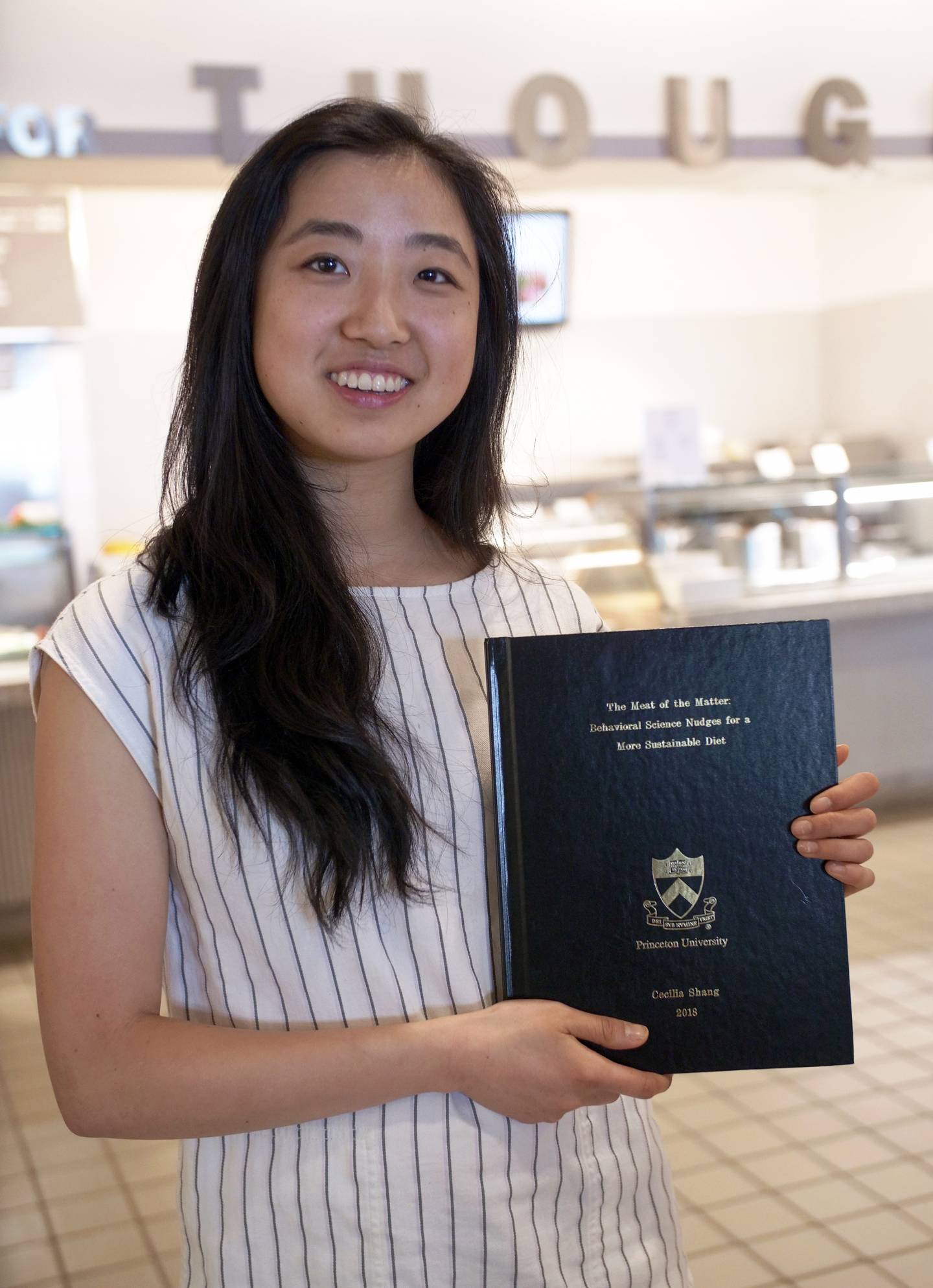 Cecilia Shang, a member of Princeton’s Class of 2018, with her senior thesis that studied how subtle signals during meal time can lead to more sustainable eating. She partnered with Campus Dining to perform the study.

Photo courtesy of Office of Sustainability

But what could possibly encourage a more sustainable diet in a meat-loving country like the United States? As part of her senior thesis, Princeton student Cecilia Shang, who graduated in June, decided to test whether certain behavioral science-informed “nudges” at the dining hall might prove useful.

Shang concentrated in the Woodrow Wilson School of Public and International Affairs and earned certificates in cognitive science and environmental studies.

Shang’s experiment, conducted at the Butler/Wilson dining hall in early 2018, tested three “choice architecture manipulations” to see if they would impact the decisions students make at dinner.

As a baseline, Shang counted how many students chose BBQ beef brisket, sautéed broccoli or oven-roasted potatoes as they passed through the hot entrée line. For this, she used a GoPro camera to anonymously film students’ hands as they selected food from the menu options.

She also tallied the weight of each food type consumed by comparing the full food service trays to what was left at the end of dinner.

Two weeks later, with help from Campus Dining, Shang repeated her measurements, but this time with some new experimental variables. First, she altered the “default” selection — the order in which the dishes were arranged. During her baseline experiment, students in line encountered the brisket first, the broccoli second, and then the potatoes. During the second round, the broccoli came first while the brisket came last.

Another change included putting a small sign on each dining table that highlighted celebrities and public figures who practice vegetarianism. An additional sign declared, “Did you know? Every day, more than 350 Princeton students choose the plant-based option for dinner at the Butler/Wilson dining hall. Make a plant-forward plate today!” Finally, Shang employed stickers. The menu cards for the two vegetable dishes each received a smiling Earth sticker colored green. The brisket card received a sad Earth sticker colored red.

Once the food was cold and the dishes put away, Shang tallied her data.

Although it’s not possible to tease out from the study which intervention most affected eating behavior, Shang suspects the order in which the food was presented had the largest impact. That’s because the post-experiment survey she conducted revealed that most students didn’t consciously notice any of her signage or stickers; and because the concept of “query theory” — which includes rearranging choices and modifying defaults for a desired outcome — has proven robust in a number of areas, from health care to energy usage.

As such, Shang has a zero-cost recommendation for wherever there is desire is to reduce meat consumption: “All dining halls should definitely always have plant-based options offered first, and the meat options offered last.”

Not all aspects of Shang’s experiment provided clear answers, however. Shang found that after introducing her “nudges,” the total weight of each type of food consumed decreased slightly. But here’s the counterintuitive part: Among students who choose brisket, they ate 12 percent more brisket, while those who chose broccoli ate 27 percent less broccoli, and those who chose potatoes ate 28 percent less potatoes.

What does it all mean? Could meat eaters be eating even more brisket after encountering Shang’s signs? Could broccoli prove resistant to behavioral signaling because many people don’t like its taste?  Could there be some other variable she’s not accounting for? Shang acknowledges these are all possibilities, and that her study was limited. Nonetheless, her research provides a window into the possibility of using behavioral science to encourage sustainable eating choices.

“Behavioral science hasn’t really been applied to this area very much,” says Shang, who conducted a review of existing studies as part of her thesis. “In the realm of eating, the existing research has mostly been around healthy eating. I think there’s a need to shift to thinking more about how to feed everyone.”

Shang is confident her professional pursuits will include a combination of working with food issues and behavioral science. “Whether it’s through policy, academia or through the private sector, there are so many ways to come at it, she said. “Every actor has a part to play.”

Plus, of course, she likes the subject matter:

“If you ask any of my friends, I love food. That’s one of my defining characteristics.”

A version of this story also ran on the Office of Sustainability website.