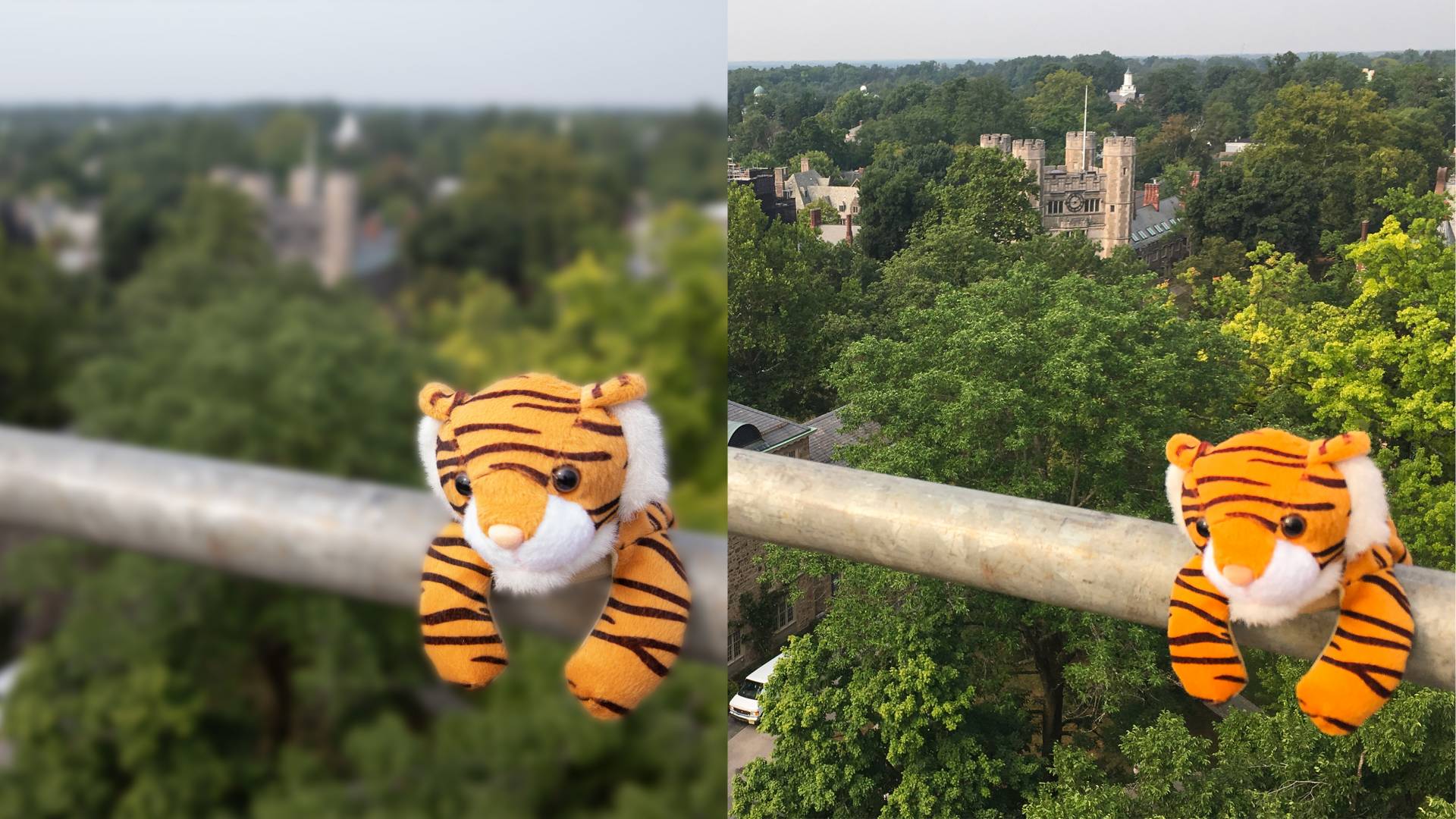 The spotlight of attention is more like a strobe, say researchers

Despite the illusion of continuous attention, human perception pulses back and forth between focus (left) and situational awareness (right), according to new research from a team of Princeton University and University of California-Berkeley researchers. Though we think we are tightly focused on one subject, such as the tiger perched on the scaffolding around the cupola of Princeton's Nassau Hall, our brain scans everything else in our surroundings four times per second.

You don’t focus as well as you think you do.

That’s the fundamental finding of a team of researchers from Princeton University and the University of California-Berkeley who studied monkeys and humans and discovered that attention pulses in and out four times per second.

“Our subjective experience of the visual world is an illusion,” said Sabine Kastner, a professor of psychology and the Princeton Neuroscience Institute (PNI). “Perception is discontinuous, going rhythmically through short time windows when we can perceive more or less.”

The researchers use different metaphors to describe this throb of attention, including a spotlight that waxes and wanes in its intensity. Four times per second — once every 250 milliseconds — the spotlight dims and the house lights come up. Instead of focusing on the action “onstage,” your brain takes in everything else around you, say the scientists.

Their work appears as a set of back-to-back papers in in the Aug. 22 issue of Neuron; one paper focuses on human research subjects, the other on macaque monkeys.

“The question is: How can something that varies in time support our seemingly continuous perception of the world?” said Berkeley’s Randolph Helfrich, first author on the human-focused paper. “There are only two options: Is the data wrong, or is our understanding of our perception biased? Our research shows that it’s the latter. Our brains fuse our perceptions into a coherent movie — we don’t experience the gaps.”

Perception doesn’t flicker on and off, the researchers emphasized, but four times per second it cycles between periods of maximum focus and periods of a broader situational awareness.

“Every 250 milliseconds, you have an opportunity to switch attention,” said Ian Fiebelkorn, an associate research scholar in PNI and the first author on the macaque-focused paper. You won’t necessarily shift your focus to a new subject, he said, but your brain has a chance to re-examine your priorities and decide if it wants to.

Brain rhythms have been known for almost a century, since electroencephalograms — better known as EEGs — were invented in 1924. “But we didn’t really understand what these rhythms are for,” said Kastner, who was the senior author on both papers. “We can now link brain rhythms for the first time to our behavior, on a moment-to-moment basis. … This is a very surprising finding, more since these rhythmic processes are evolutionarily old — we find them in non-human primates as well as in our own species.”

This pulsing attention must present an evolutionary advantage, the researchers suggest, perhaps because focusing too intently on one subject could allow a threat to catch us by surprise.

“Attention is fluid, and you want it to be fluid,” said Fiebelkorn. “You don’t want to be over-locked on anything. It seems like it’s an evolutionary advantage to have these windows of opportunity where you’re checking in with your environment.”

“It’s an elegant way to allocate brain resources — to sample the environment and not have any lapses,” said Robert Knight, a professor of psychology and neuroscience at Berkeley and a co-author on the human-focused paper.

Kastner’s lab focuses on macaque research, so she reached out to Knight’s lab, which does similar studies on humans. The resulting papers are unprecedented, Knight said.

“This is cross-species validation of a fundamental aspect of human behavior,” he said. “I have not seen any back-to-back human and monkey papers appear anywhere … and these are in the same issue of Neuron, a preeminent journal.”

Fiebelkorn agreed: “We have an assumption that what we find in the monkey will hold up in humans, but it’s rarely checked as carefully as it is here.”

“Originally, we wanted to study something very different,” said Kastner. “We wanted to ask how we can select objects from our cluttered visual environments. … We were particularly looking at how the intake of visual information unfolds over time — something that is rarely done in behavioral studies — and this revealed the rhythmic structure of perception. It was a complete surprise finding.”