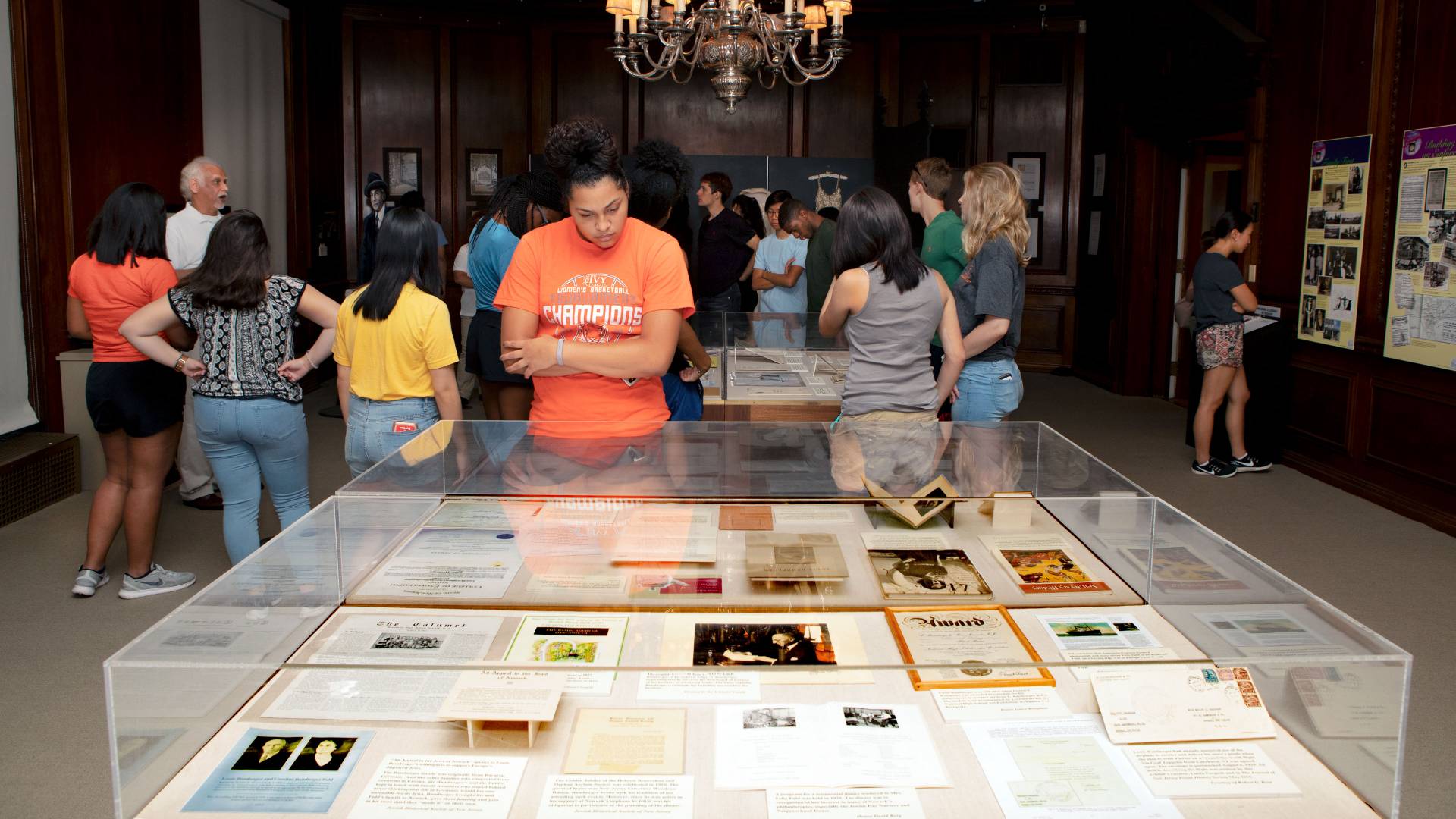 Through service, first-year students get acquainted with classmates and community

First-year students participating in the Community Action program as part of Princeton University’s Orientation are joining more than 100 organizations in New Jersey and Pennsylvania this week to assist with service projects. Before they perform their volunteer work, they are getting to know the communities in which they are involved. Here, students learn about the history of Newark, New Jersey, through an exhibit on businessman and philanthropist Louis Bamberger at the New Jersey Historical Society.

NEWARK, NEW JERSEY — In the third-floor vestibule of the New Jersey Historical Society, a group of first-year Princeton University students found themselves standing between Newark’s past and present.

On display to their left was a timeline of the 1967 riots illustrated with oversized black-and-white photos of the aftermath. To their right was a collection of framed, full-color shots of city landmarks today, from the Prudential Center to NJPAC, that have contributed to Newark’s revival.

A short while earlier, just a floor below, they visited an exhibit titled “‘Meet Me under Bamberger’s Clock’: A Celebration of the Life and Contributions of Louis Bamberger” that showed Newark in its heyday in the early 20th century, and another that examined New Jersey’s role in World War I.

Their introduction to Newark history — along with New Jersey history — was intended to prepare them for community service projects they will be performing in the city this week that focus on the arts, health, immigration, social justice, hunger and homelessness, and criminal justice. 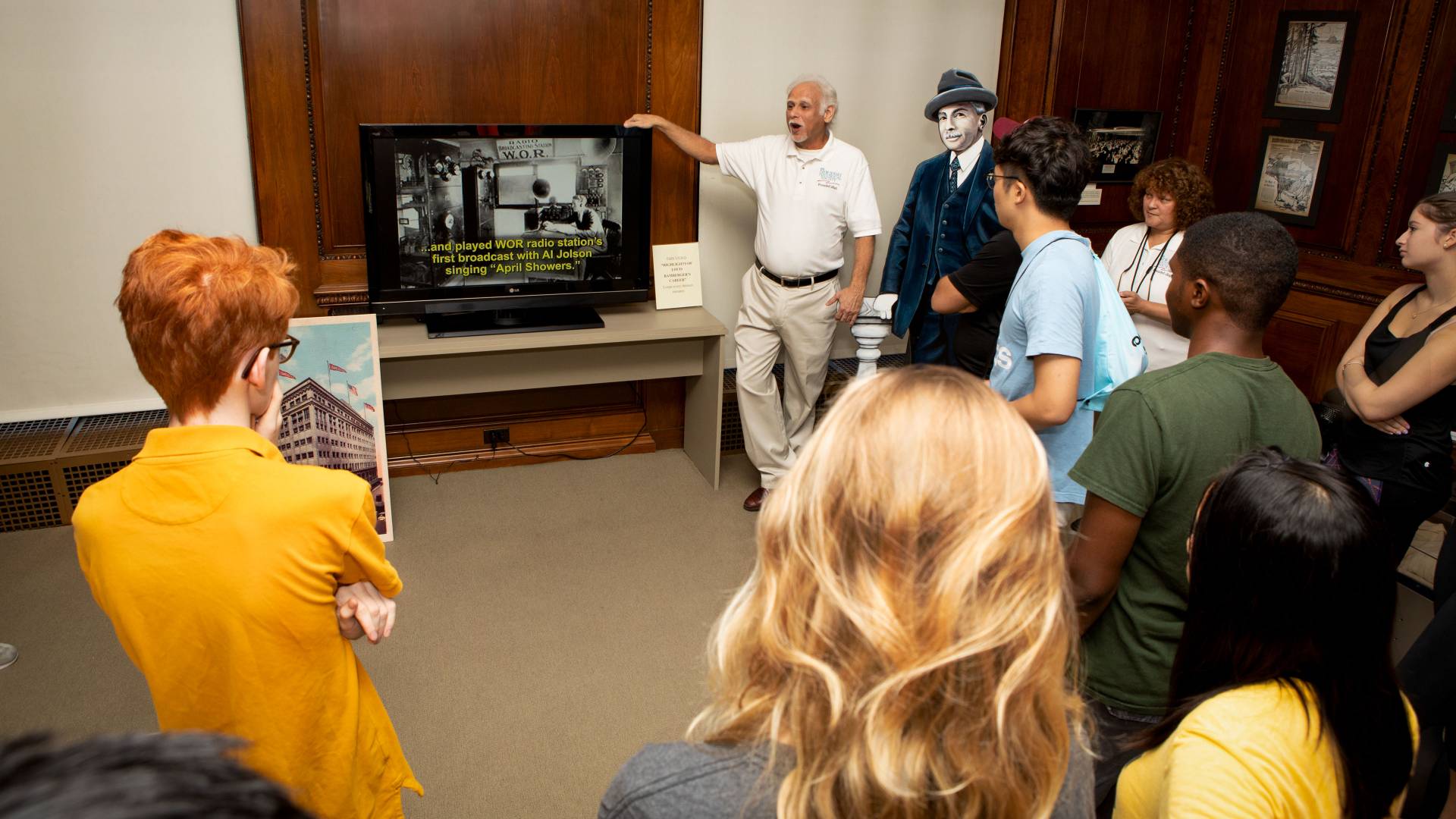 The students are among more than 600 new undergraduates who have fanned out across the state and into the Pocono Mountains in Pennsylvania as part of Community Action, a week-long Orientation program coordinated by the Pace Center for Civic Engagement. Community Action facilitates the transition to college by introducing first-year students to the values, expectations and resources of the Princeton community through service and civic engagement.

She explained that student leaders facilitate the small-group experience and introduce the newest class to “traditions and values and really what it means to be a Princetonian.”

“I know service is important to Princeton, so I like that they’re instilling that value in us before we even start in the classroom,” said Jamie Kim of Los Angeles. “I feel like we’re going to get really close by the end of the trip.” 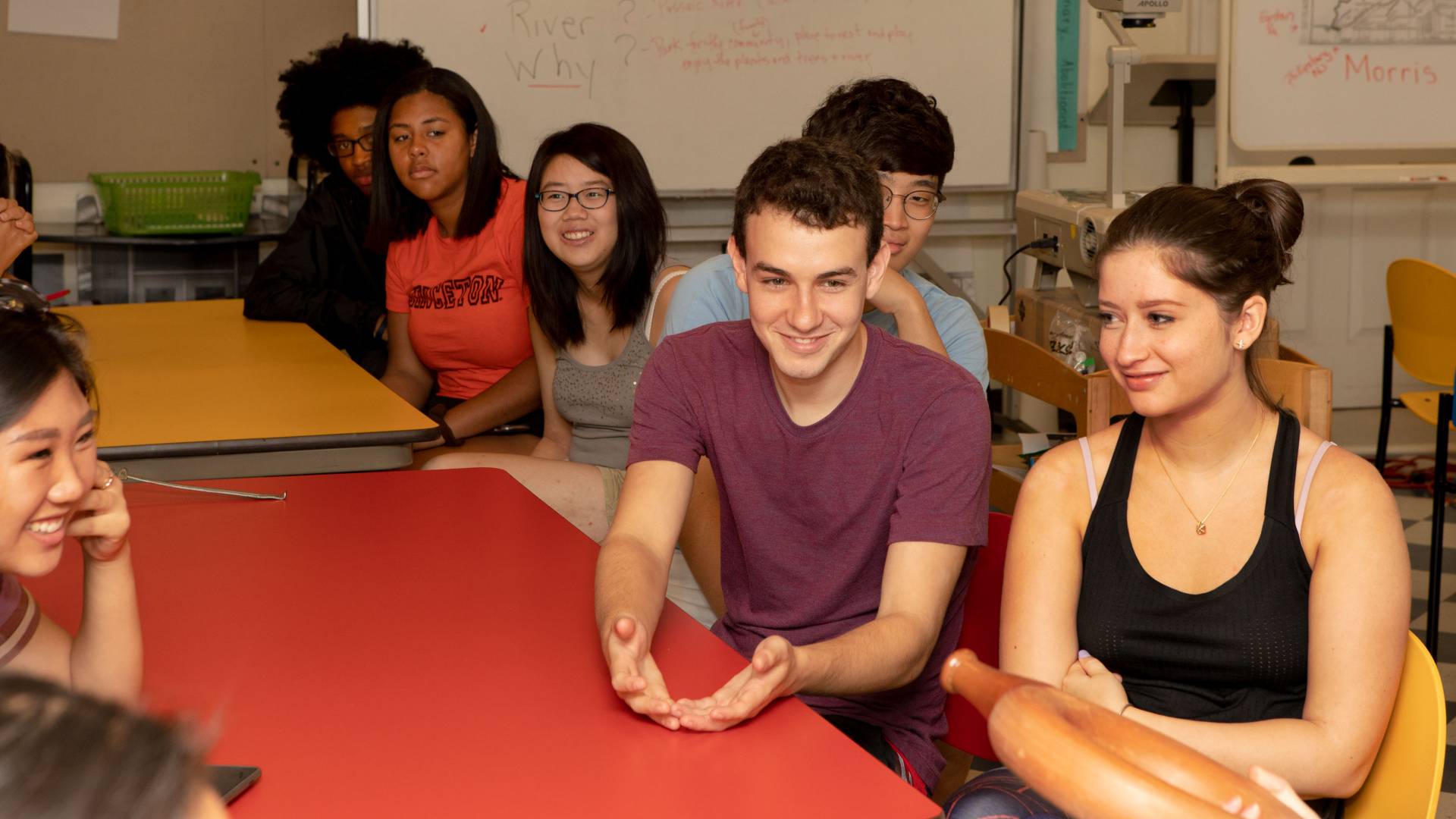 Community Action uses service as an opportunity to introduce new students to each other and also to Princeton’s values. After learning about Newark history, the students in Community Action’s North Jersey groups will take that knowledge to perform service projects in the arts, health, immigration, social justice, hunger and homelessness, and criminal justice.

This year, 58 Community Action groups are partnering with more than 100 organizations throughout New Jersey and in eastern Pennsylvania. The students are learning about the communities the organizations serve and are assisting in their activities. Each group comprises 10-12 first-year students and two to three student leaders.

Other members of the Class of 2022 are participating in small-group bonding experiences through Outdoor Action and Dialogue and Difference in Action.

“Community Action is very difficult to encompass because there are so many different things that are happening,” Gruppo said. “Each region has its own feel to the experience.”

In Pennington, students are collecting field data in support of the Watershed Institute’s water conservation efforts. Another group is pairing with Elijah’s Promise in New Brunswick and the Garden State Community Kitchen in South Brunswick to address hunger and poverty.

At the Jersey Shore, students are partnering with SBP (originally called the St. Bernard Project), which continues to provide aid to families affected by Hurricane Sandy almost six years later. And through an arts-based group in conjunction with the Lewis Center for the Arts, students will create arts projects for the benefit of the Princeton-Blairstown Center.

What the activities have in common is interaction with members of local communities and a variety of organizations whose mission is to better the world. Each group also has an opportunity to prepare for and reflect upon their service so that the students’ contributions are meaningful. 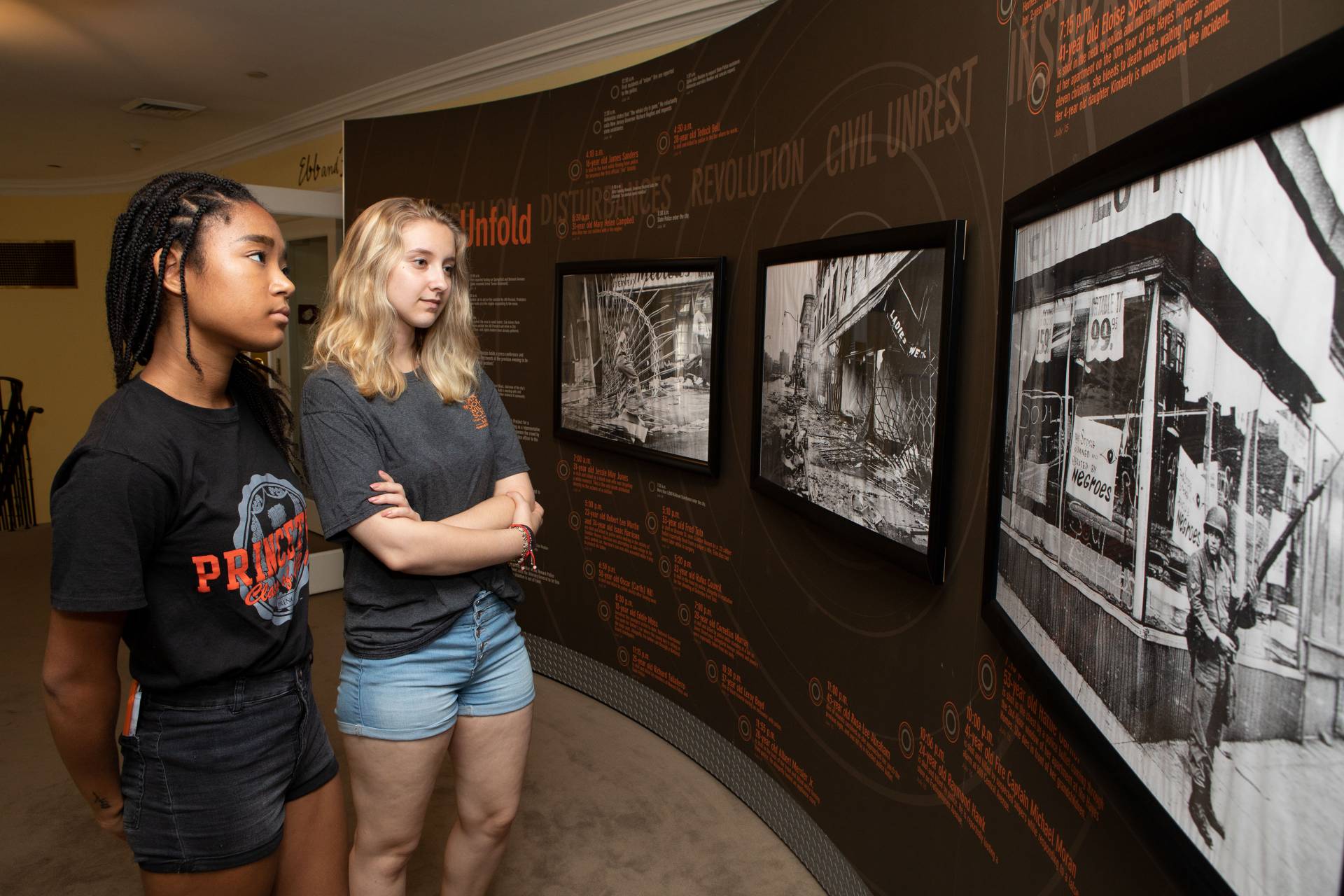 Anna Bogdan (left), a senior, and Masha Miura, a sophomore, co-leaders of the group Law and Justice North Jersey: Contextualizing Race in the Legal System, take in a timeline display of the 1967 Newark riots.

“At the Pace Center we have a focus on having students do service well,” Gruppo said. “And what we’re trying to do is to instill those values of responsibility: how do we enter a community respectfully and with gratitude and with humility and empathy?”

The groups learning about Newark’s history did so less than a half mile away from Old First Church, to which Princeton can trace its origins in the mid-1700s as the College of New Jersey.

Later in the week, the Hunger and Homelessness North Jersey: Nourishing Communities groups will visit a community garden and a soup kitchen as part of their service project. The Law and Justice North Jersey: Contextualizing Race in the Legal System groups will meet with formerly incarcerated individuals, sit in on a court hearing, then visit inmates at a nearby prison.

Jalen Salmon, of Pittsgrove, New Jersey, said although he has lived in the state his entire life, he appreciated learning more about New Jersey and especially about the Newark riots. “I think it gives a context not only about the state, but also why certain things are the way they are,” he said.

“Learning the history of the city, how it came to be, how it is now — what led to the hunger and homelessness they’re experiencing — is important for us to help them and to develop a deeper sense of empathy,” said Makailyn Jones, of Sharon, Massachusetts.

Andrea Toth of Vancouver, British Columbia, said she wasn’t sure what to expect during the visit to the New Jersey Historical Society, but found it gave her context for this week’s service project, as well as her new status as a New Jersey resident. “It’s super eye-opening,” Toth said. “I think this is good for me because all the history I’ve done is Canadian.”

As an Orientation program, the students said working together in service through Community Action helped break the ice between them.

Brandon Huynh, of Brentwood, Tennessee, said he appreciated the way Community Action facilitates dialogue between students meeting one another. “It’s helpful because it establishes a space where we all respect each other,” he said. “It’s very welcoming and accepting.” 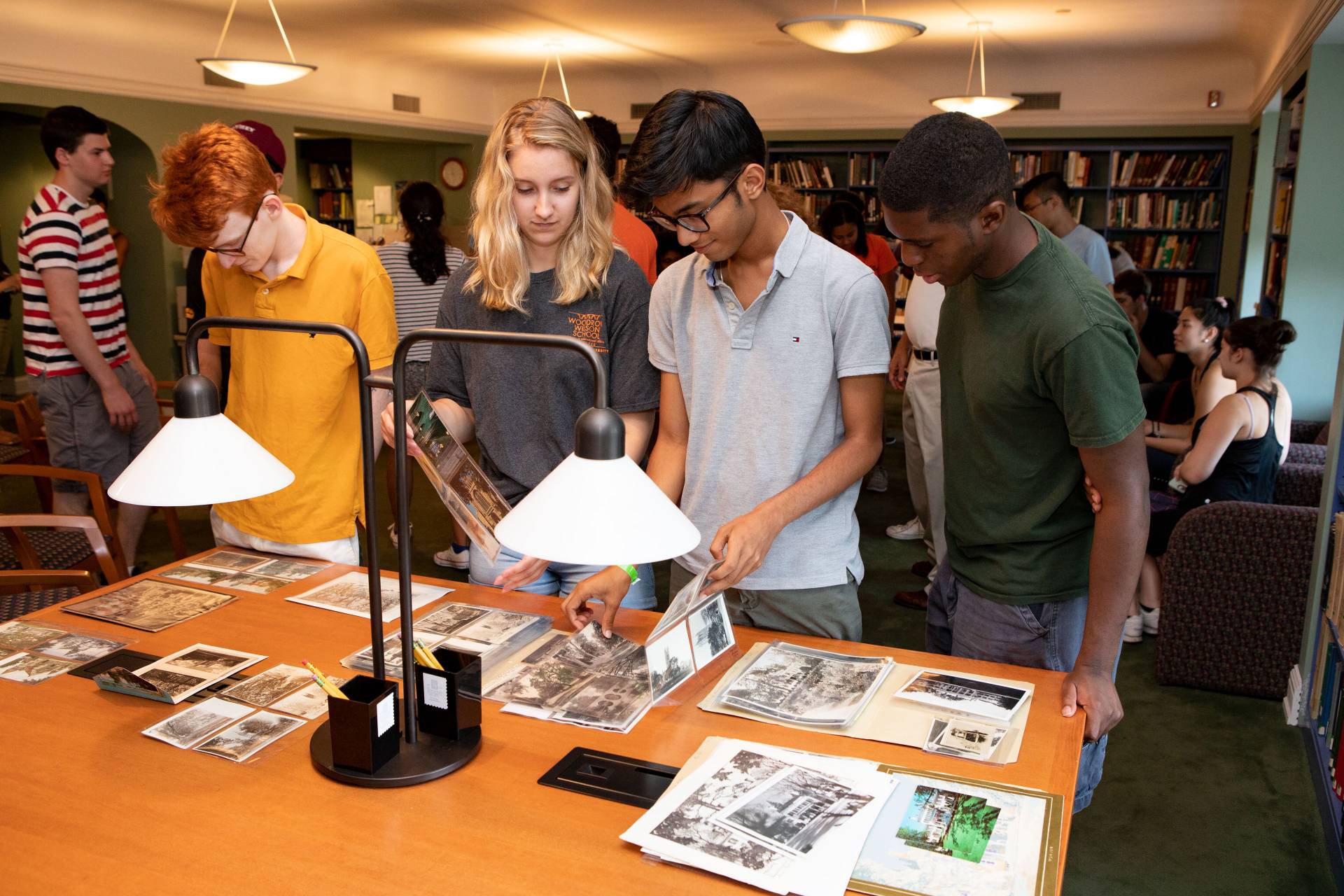 In the historical society’s research library, students view Princeton University papers, pamphlets and photos. The University traces its own roots to Old First Church in Newark. 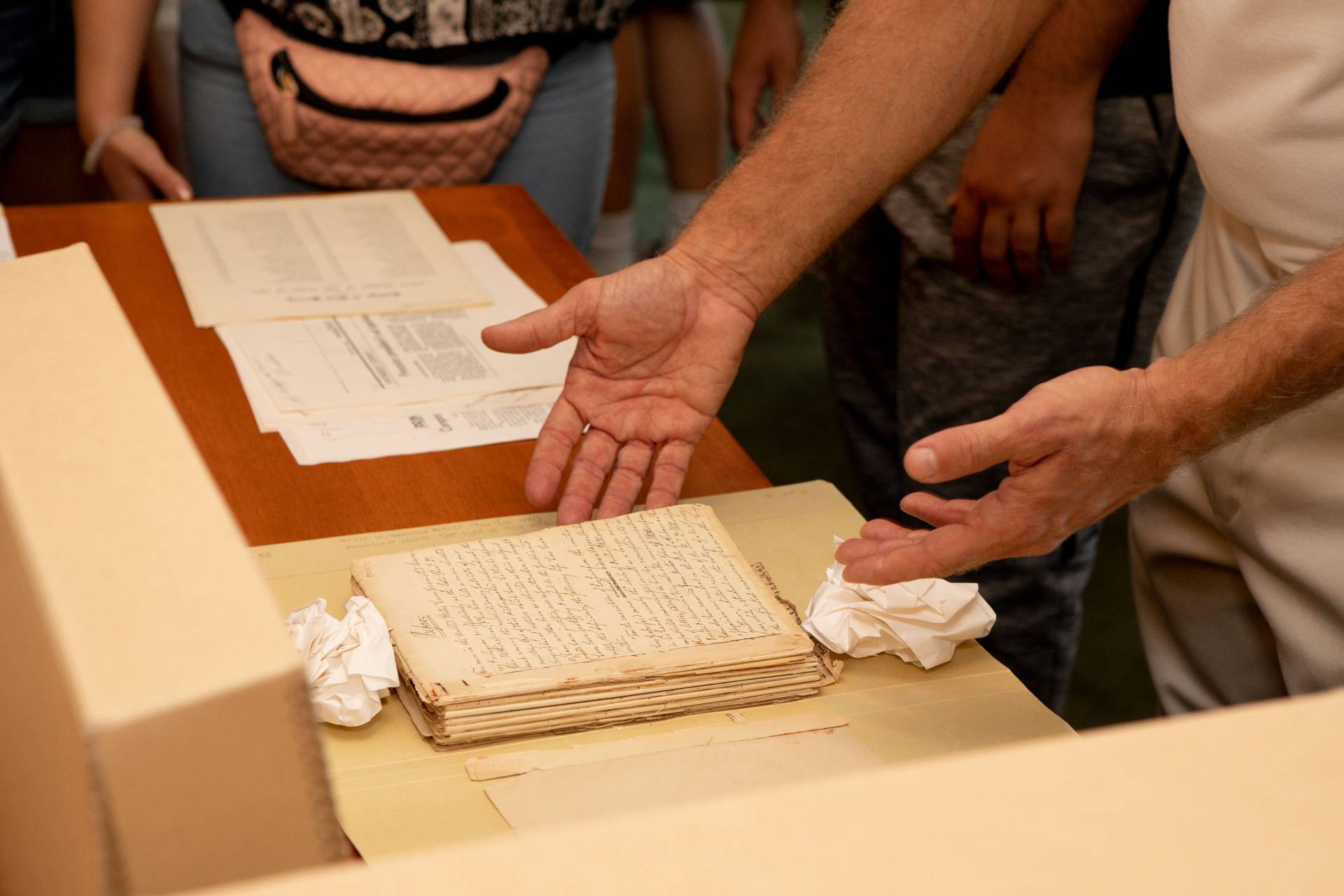 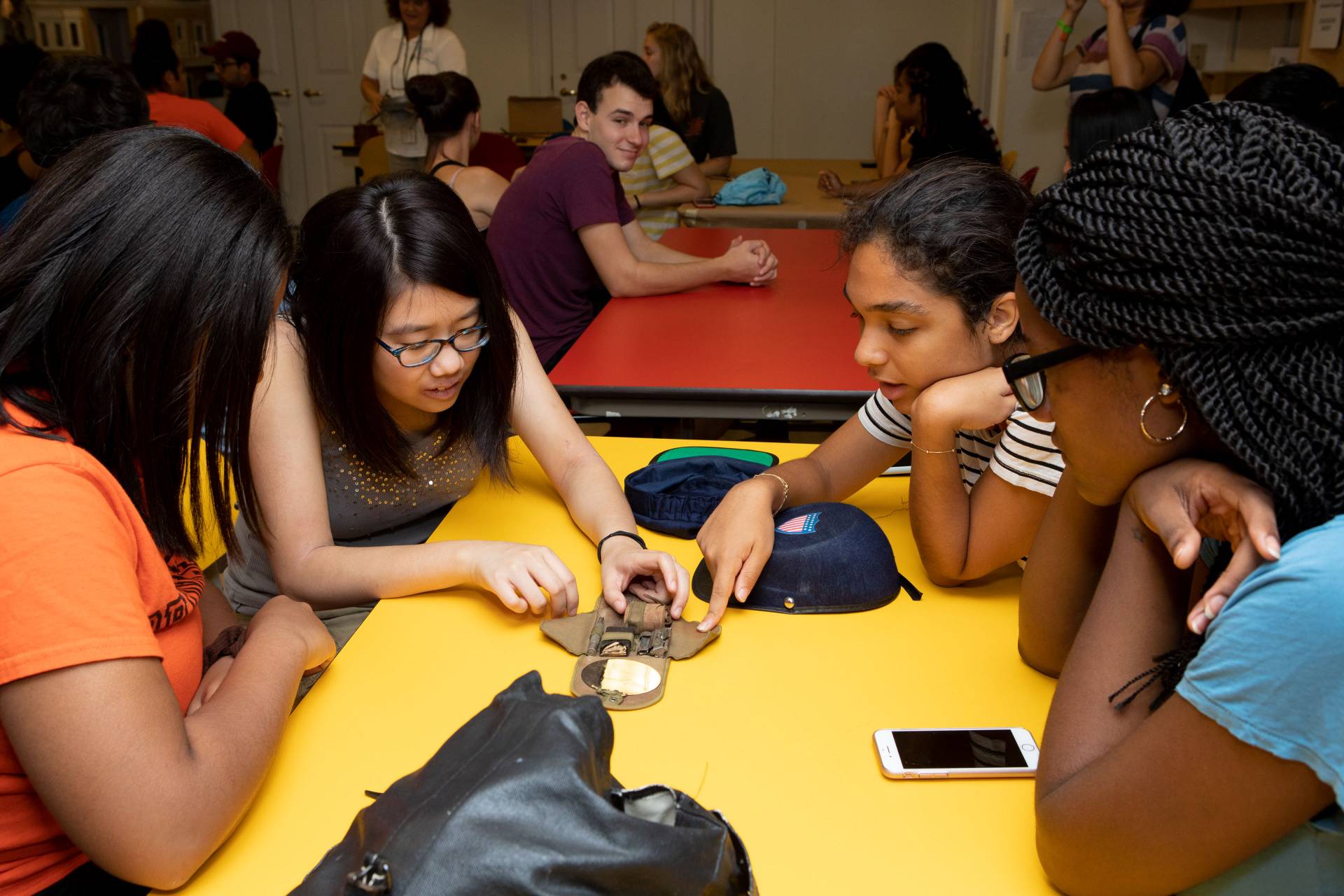 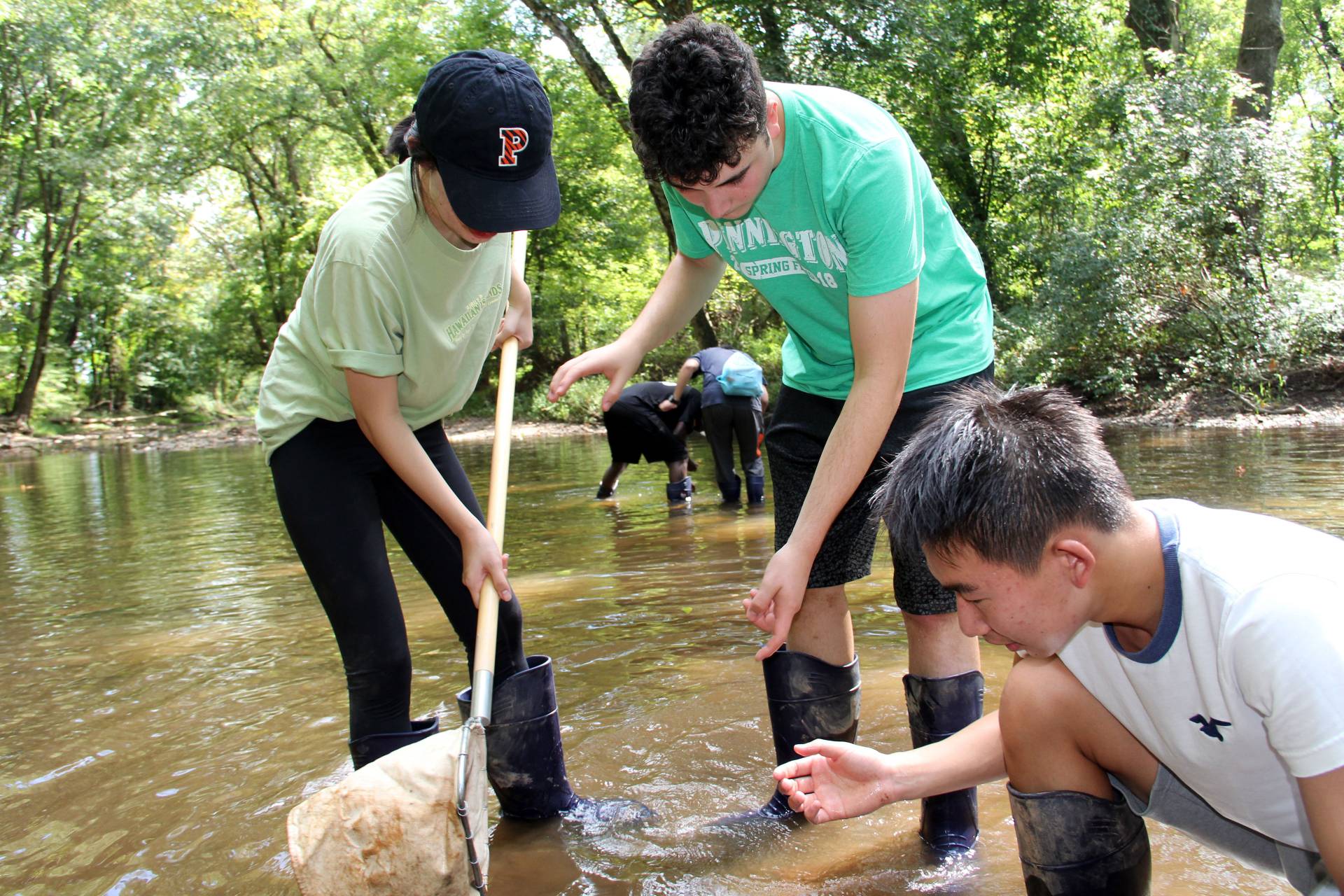 The Environment Central Jersey: Water Protection group gets wet at the Watershed Institute in Hopewell, New Jersey, as they learn about stream ecology and search for macroinvertebrates to assess the health of the Stony Brook. From left are first-year students Doris Li, Jacob Essig and Angelo Ou. 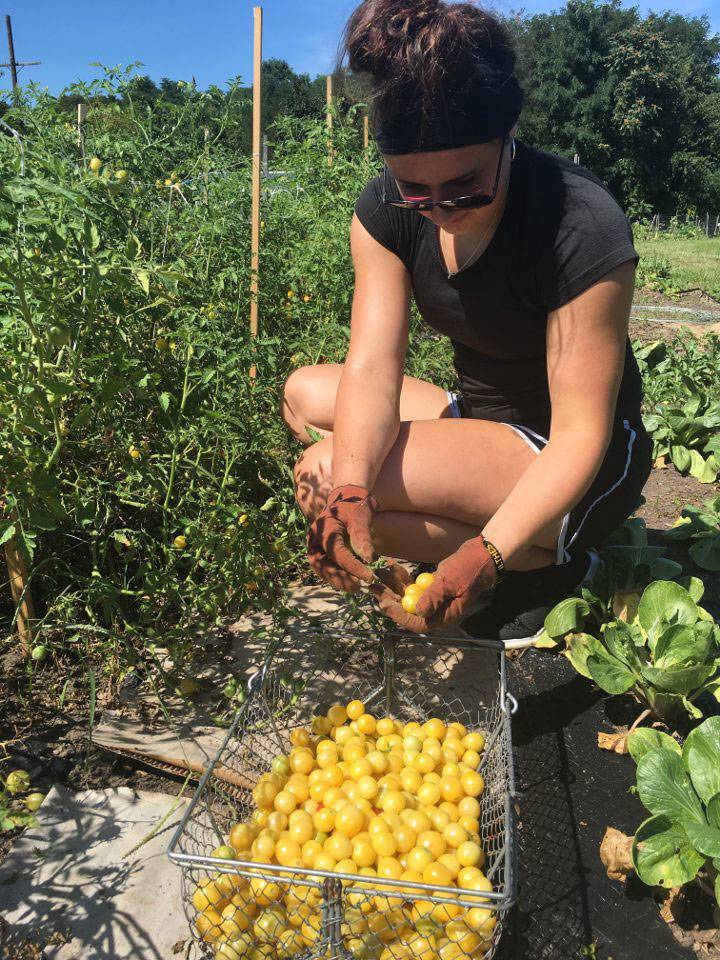 Photo by Jeremy Pulmano, Class of 2021

Month of Service allows campus to engage with local community

Incoming Princeton students learn powerful lessons about each other during Orientation