John M. Darley, the Dorman T. Warren Professor of Psychology, Emeritus, and professor of psychology and public affairs, emeritus, died Aug. 31 in Lawrenceville, New Jersey, of complications from Lewy body dementia. He was 80. 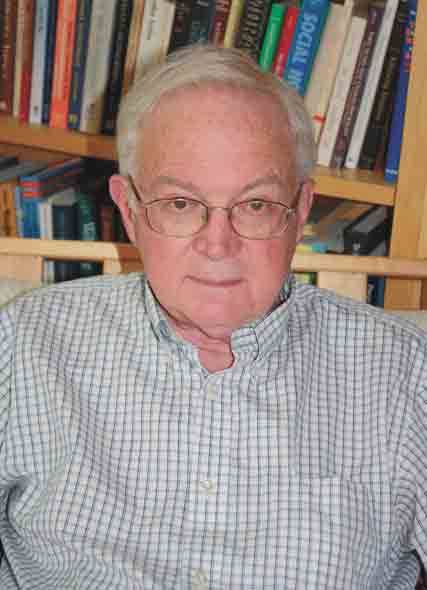 Darley, who served on the Princeton faculty for 44 years, was one of the foremost figures of social psychology. He conducted some of the earliest studies of bystander intervention, beginning his research after the notorious 1964 murder of Kitty Genovese in New York City, in which news reports said 38 people witnessed her murder but not one called police or attempted to intervene.

“John Darley had an unequalled knack for showing that an important social problem could be studied using the scientific method,” said Joel Cooper, a Princeton professor of psychology and a friend of Darley for nearly 50 years. “He is probably best known for his series of studies that analyzed the causes of bystander apathy to people in need.”

Darley published extensively on altruism and bystander intervention, deviance and conformity, attribution theory, social comparison processes, and expectancy confirmation. He was co-author of an introductory psychology textbook with Sam Glucksberg and Ron Kinchla, and also co-authored a book with Mark Zanna on professional issues in psychology.

“John was a towering figure in social psychology and a leader in the department, but where he really excelled was in mentoring young academics,” said Provost Deborah Prentice, the Alexander Stewart 1886 Professor of Psychology and Public Affairs. “John loved his students: the students in his courses, the graduate students who worked with him, and his undergraduate advisees. He would spend hours with them, talking about research, coursework, their lives at Princeton and their plans beyond.”

“He was, to me, the model Princeton professor — a productive, tough-minded intellectual combined with the ultimately sympathetic and friendly mentor we should all hope to be,” said Stanley Katz, a lecturer with the rank of professor in international and public affairs at the Woodrow Wilson School of Public and International Affairs.

Darley was born on April 3, 1938, in Minneapolis. His father, John G. (“Jack”) Darley, was a teacher and administrator at the University of Minnesota and a major national figure in psychology. Darley grew up in Minneapolis, except for the period in World War II when his family lived in Florida and Washington, D.C. Throughout his life, he maintained friendships with friends from Boy Scouts and his University High School class, including taking canoe trips in northern Minnesota and Canada with friends.

As a youth, Darley conversed with eminent psychologists in his family’s living room. He followed in his father’s professional footsteps, receiving a B.A. in psychology from Swarthmore College and earning his Ph.D. at Harvard University.

Darley began his career at New York University, where he opened his inquiry into why bystanders who had witnessed Genovese’s murder reportedly had not intervened. With his Columbia University colleague Bibb Latané, Darley conducted innovative laboratory and field experiments that tested and confirmed their hypotheses that the unresponsiveness of bystanders was driven by uncertainty and indecision, and the belief that others would help.

After serving four years at NYU as an assistant professor, Darley was hired at Princeton as an associate professor. Within a few years, he had established “one of the finest social psychology programs in the nation,” Cooper said.

“It remains so today,” Cooper said. “His legacy for modern psychology at Princeton is enormous.”

Darley chaired Princeton’s Department of Psychology for five years. He was named the Dorman T. Warren Professor of Psychology in 1989, and in 2001, he was jointly appointed to Princeton’s Woodrow Wilson School. He transferred to emeritus status in 2012.

Darley’s interests were wide ranging. He spent about a decade from the mid-1970s to the mid-1980s studying behavioral approaches to energy conservation in collaboration with colleagues in the School of Engineering and Applied Science. His study of social influence and group dynamics led to a project on how organizations socialize wrongdoing.

His interest in laypeople’s conceptions of the law and the legal system grew into his main line of research for the last decade of his career. His most-recent work focused on people’s perceptions of sentencing guidelines. He published on the topic with co-authors including Tom Tyler of Yale Law School, Paul Robinson of the University of Pennsylvania Law School and Lawrence Solan of Brooklyn Law School.

Katz called Darley, “a great teacher, mostly because he was so thoughtful, kind and student-oriented.

“He had a wonderful, impish sense of humor (and a very weak voice),” Katz said. “I don’t think I ever heard him utter a harsh word about another person. And yet, he was very tough-minded intellectually, and very good in intellectual give-and-take.”

Prentice said Darley taught his students that “academic work can be both rewarding and fun. And he taught them that they had something to contribute — that they mattered and their work mattered.”

Adam Alter, an associate professor of marketing at New York University’s Stern School of Business who received his Ph.D. in psychology at Princeton, remembered Darley as a brilliant professor and an attentive adviser.

“He always seemed to understand, ahead of time, what my next challenge was likely to be, and he pre-empted each challenge with a vote of reassurance,” Alter said. “He was a giant in the field, but he never made me feel small, and he managed to balance the roles of friend and mentor perfectly.”

His numerous honors include a Guggenheim Fellowship and the Distinguished Scientist Award from the Society of Experimental Social Psychology. In 2013, he received the William James Lifetime Achievement Award for Basic Research from the Association for Psychological Science.

Memorial donations may be made to the Farm Sanctuary, the Lewy Body Dementia Association, Doctors Without Borders or another organization of the donor’s choice.

View or share comments on a blog intended to honor Darley’s life and legacy.