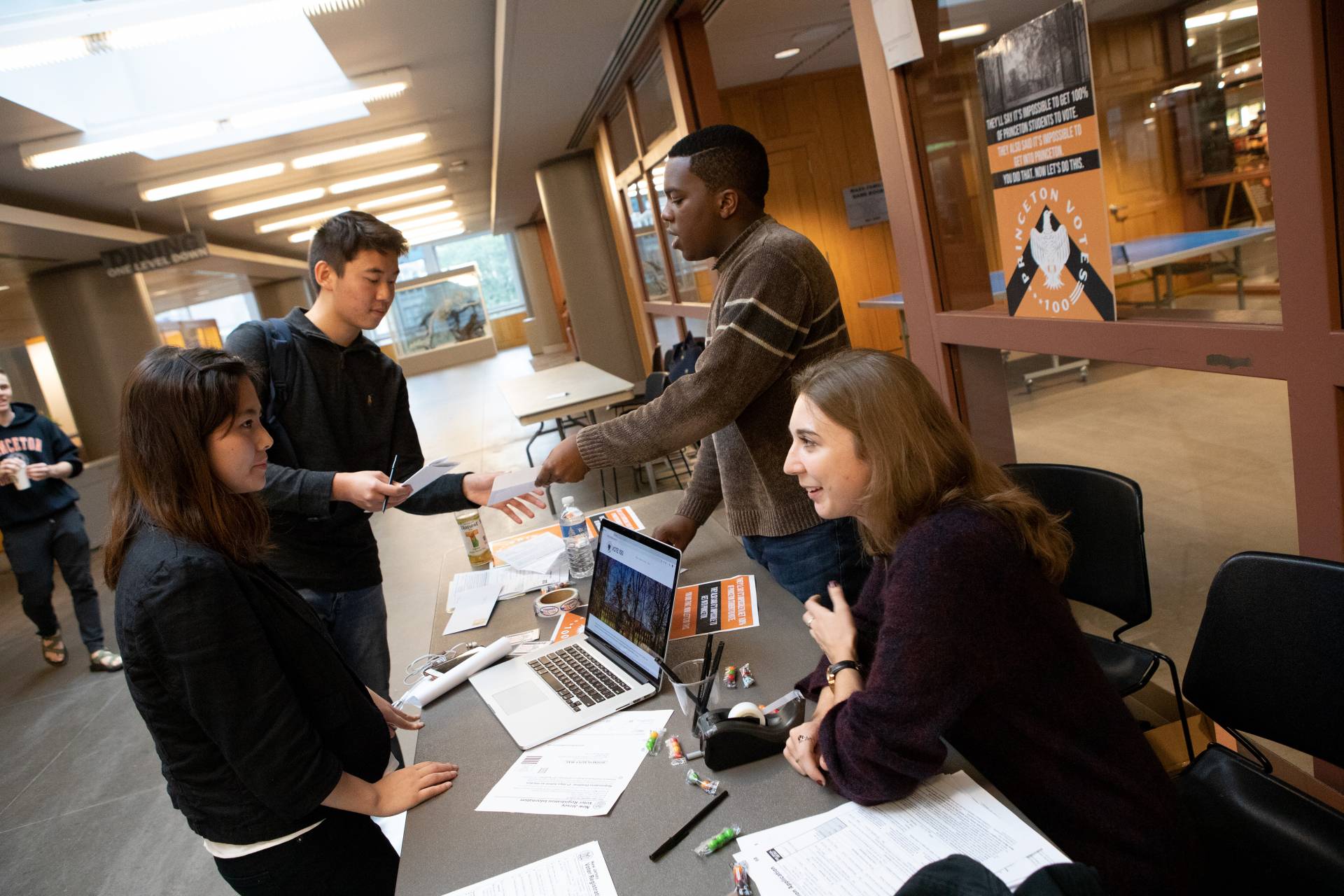 Princeton students Jonathan Haynes (back right) and Amanda Morrison (front right) talk with first-year Allen Dai (back left) and junior Eun Ahn (front left) about the Vote 100 initiative. Haynes and Morrison are part of a campus effort to have all Princeton undergraduates sign the Vote 100 pledge, and to inform students about voter registration, absentee ballots and how to vote on campus.

Inspired by Princeton’s informal motto, “In the Nation’s Service and the Service of Humanity,” students are leading a movement on campus to get their peers to vote.

The Vote 100 campaign encourages all undergraduates to “participate in the 2018 midterms or any other applicable elections, and to engage civically through advocacy, service or any avenue that is personally resonant.” With three weeks until Election Day on Nov. 6, 28 percent of undergraduates have so far signed the Vote 100 pledge. 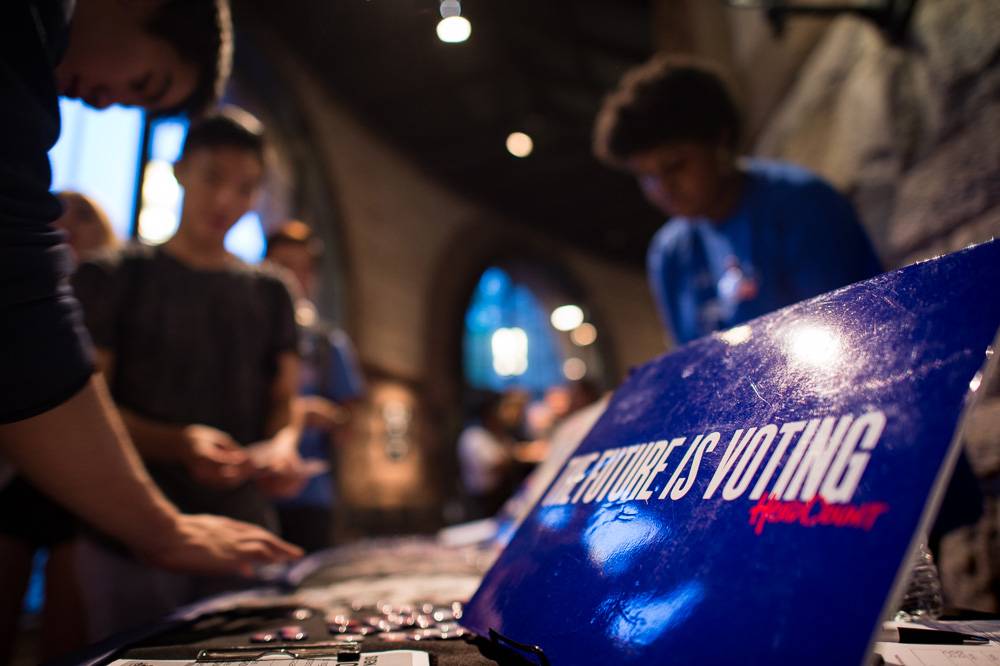 The Vote 100 initiative kicked off in September with a Stand Up and Vote comedy show and voter registration drive in Richardson Auditorium. The campaign encourages all undergraduates to participate in the 2018 midterms or any other applicable elections, and to engage civically.

Sponsored by the Office of the Dean of Undergraduate Students (ODUS) and organized by a team of student leaders, Vote 100 aims to increase civic engagement among Princeton students. College students nationally are among the age demographic with the lowest voting rates.

“Young people should start voting as soon as eligible to develop a habit of informed political engagement and to feel invested in the decisions being made at the local, state and national levels,” said senior Amanda Morrison, a Vote 100 leader from Montana majoring in the Woodrow Wilson School of Public and International Affairs.

Vote 100 aspires to create “a dynamic and enthusiastic” group of voters on campus this fall, who are informed how voting works and know how to educate themselves on the issues and candidates appearing on the ballot. 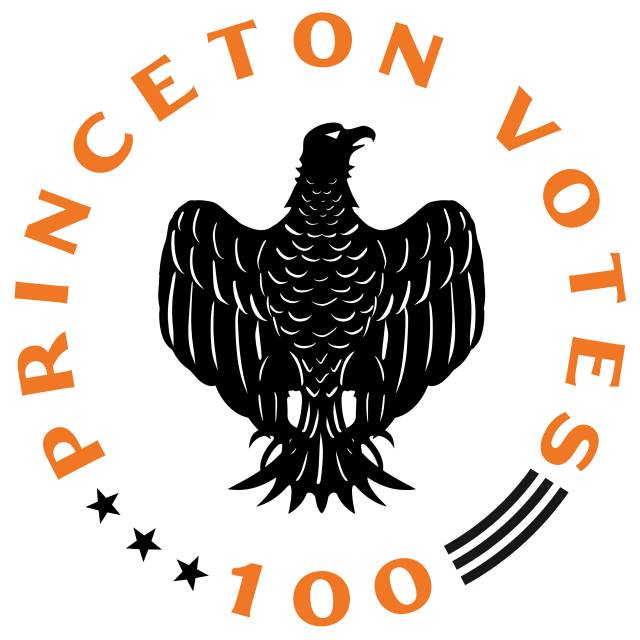 Vote 100 is sponsored by the Office of the Dean of Undergraduate Students (ODUS) and organized by a team of student leaders. The initiative is inspired by Princeton’s informal motto “In the Nation’s Service and the Service of Humanity.”

Graphic courtesy of Office of the Dean of Undergraduate Students

Students who are U.S. citizens can register to vote in their home states and vote by absentee ballot, or may vote on campus by registering in Princeton, New Jersey. Registration deadlines vary by state, with more information available on the Vote 100 website. The final day to register in New Jersey is today (Oct. 16).

Students who live in campus housing and are registered in Princeton should use the Voting District Map on the Office of Community and Regional Affairs website to find where to vote. Most undergraduates will vote at the polling place in Icahn Laboratory. The Pace Center for Civic Engagement's website also connects students with voting and ballot information.

“Voting is the most direct action we can take to make political change,” Morrison said. “This is what we tell students when we urge them to sign the commitment pledge. If the pledge significantly increases voting participation, we hope that will translate to a greater number of students following the decisions of their leaders after the election, and remaining involved through phone calls, letters and campus discussion.”

The Vote 100 initiative kicked-off in September with a Stand Up and Vote comedy show and voter registration drive in Richardson Auditorium, featuring comedian Mike Birbiglia and surprise guest Jon Stewart. 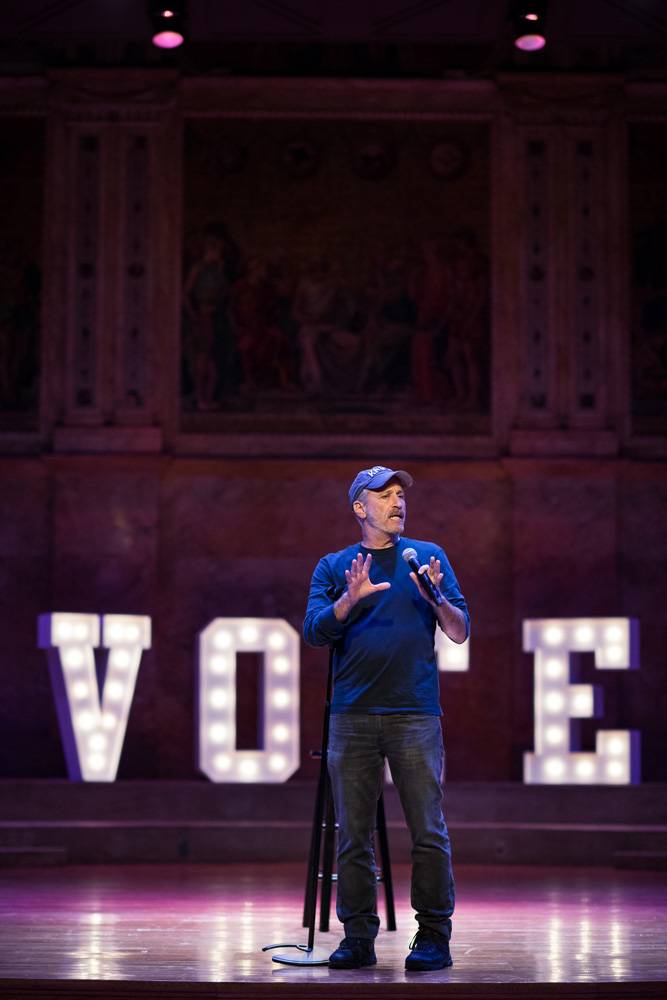 Comedian and New Jersey native Jon Stewart made a surprise appearance at the Stand Up and Vote comedy show at Princeton University in September.

Students are tabling in Frist Campus Center to provide information on voter registration, absentee ballots and how to vote on campus. Student groups also are sharing videos on social media that encourage peers to take the Vote 100 pledge.

“Key reasons that we have identified for why students don’t vote are difficulty in finding information and barriers to casting a ballot,” said Alison Nabatoff, program coordinator in ODUS. “Our goal is to provide easily accessible voter information for all students and try to eliminate as many procedural barriers as possible. For many students, it may be their first time voting so we want to make sure to support them in the process.”

For non-U.S. citizens, the Vote 100 campaign encourages students to “commit to cast a ballot in every election anywhere they are eligible, to work with their peers to foster an energized and engaged voting environment on campus, or to take on personally meaningful civic issues in a purposeful way.”

“If you are a part of our Princeton undergraduate community, you are a part of Vote 100,” Nabatoff said. “We want students to think of voting, wherever that may be, as a part of being a Princetonian, and for those who are not eligible, we want them to feel energized to take on meaningful issues.”

Student leaders emphasized that Vote 100 is not about telling people how who to vote, but encouraging students to do so.

“Electoral participation is a critical aspect of a vibrant democracy,” said junior Jonathan Haynes, a politics major from Michigan. “We want all students on campus to pledge to participate in this and all future elections, showing that civic responsibility is a foundational characteristic of what it means to be a Princetonian.”

‘No off years.’ Princetonians encourage college students to be more civically active

'What can I do?' How to put your values into action