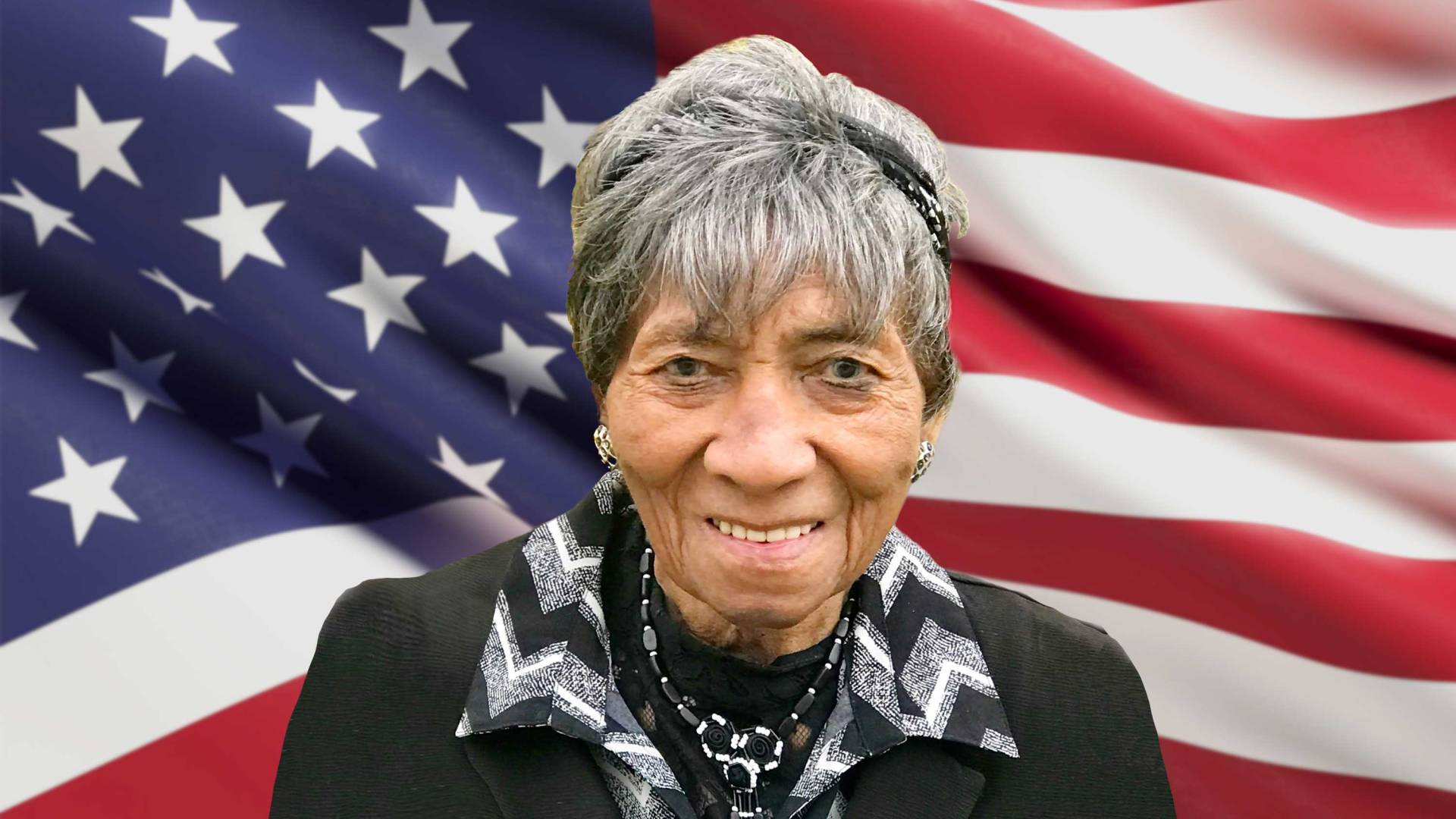 Princeton’s Board of Trustees has approved naming a University building for Laura Wooten, who was recognized as the longest serving election poll worker in the United States, in honor of her outstanding service to the nation and to humanity. Wooten was a longtime resident of Princeton, New Jersey, and worked in Campus Dining for more than 27 years. She died in March 2019 at the age of 98. 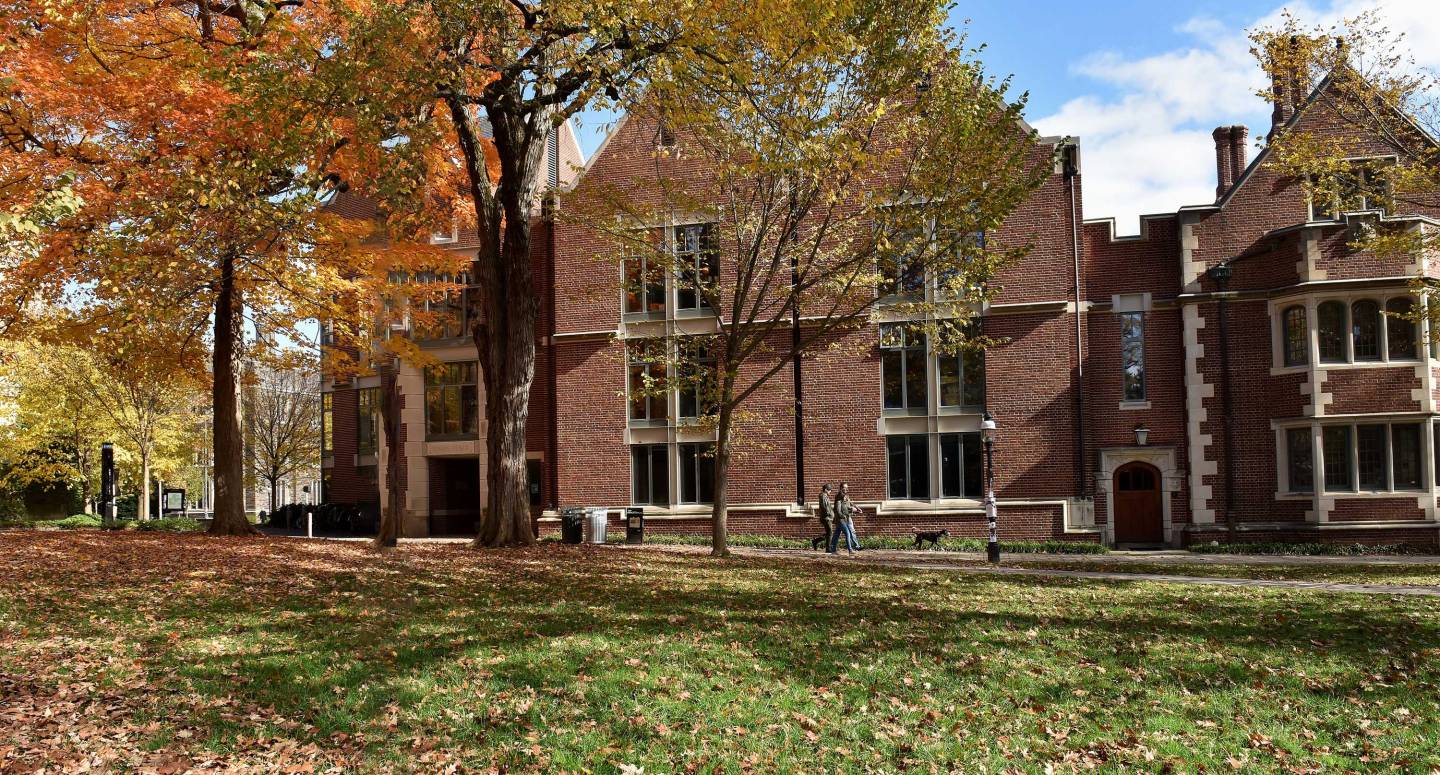 Marx Hall will be renamed Laura Wooten Hall, effective July 1. The Board of Trustees approved the renaming following the recommendation of the Council of the Princeton University Community (CPUC) Committee on Naming.

Marx Hall will be renamed Laura Wooten Hall effective July 1. The building, located along Washington Road, houses the University Center for Human Values, academic offices, a department library and teaching spaces. Plans for a formal dedication will be announced at a later date.

The Board of Trustees’ action followed the recommendation of the Council of the Princeton University Community (CPUC) Committee on Naming, which is made up of faculty, staff, graduate student, undergraduate and alumni representatives, and provides advice to the board with regard to the naming of programs, positions and spaces at the University.

The naming of Laura Wooten Hall is intended to honor her extraordinary contributions and emphasize the importance of civic engagement at all levels.

President Christopher L. Eisgruber said: “I am grateful to the Naming Committee for this inspiring recommendation, and I am delighted that Princeton will honor Laura Wooten for her extraordinary contributions to our nation and the democratic process. The addition of Laura Wooten’s name to the tapestry of our campus will recognize Princeton's history, the breadth of our community, and the positive impact that one remarkable person can have through lifelong dedication to public service and civic values.”

Wooten volunteered at local, primary and general election polls in New Jersey for 79 years. Last summer, Gov. Phil Murphy signed “Laura Wooten’s Law,” citing her as the longest serving poll worker in the country. The legislation focuses on middle school curriculum guidelines to ensure that students study the values and principles underlying the American system of constitutional democracy, the function of government and the role of a citizen in a democratic society. 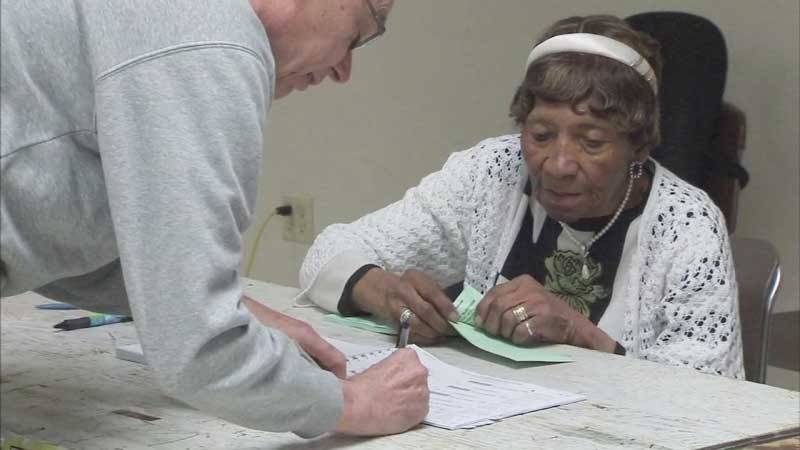 Wooten's long service as a volunteer at New Jersey election polls began in 1939 and continued for nearly eight decades.

“Laura Wooten’s life is a study in civics,” Murphy said at the July 2021 signing ceremony. “She set a tremendous legacy of service. Even more importantly, in her life, born in the segregated South, she persevered through sexism and racism, including right here in New Jersey. Her life stands as evidence that change in a democracy comes not from those who hold elective office, but through the work of ordinary citizens.”

Wooten was born in Goldsboro, North Carolina, on Dec. 19, 1920, the same year women’s right to vote was ratified in the U.S. She moved to Princeton as a young child at a time when the schools were segregated and began volunteering at election polls after graduating high school in 1939.

“Her status as the longest continuously serving poll worker in the nation is a rare and exceptional achievement, one that offers a powerful example of how ordinary citizens can perform extraordinary service to the nation,” wrote Associate Professor of History Beth Lew-Williams, chair of the CPUC Committee on Naming. 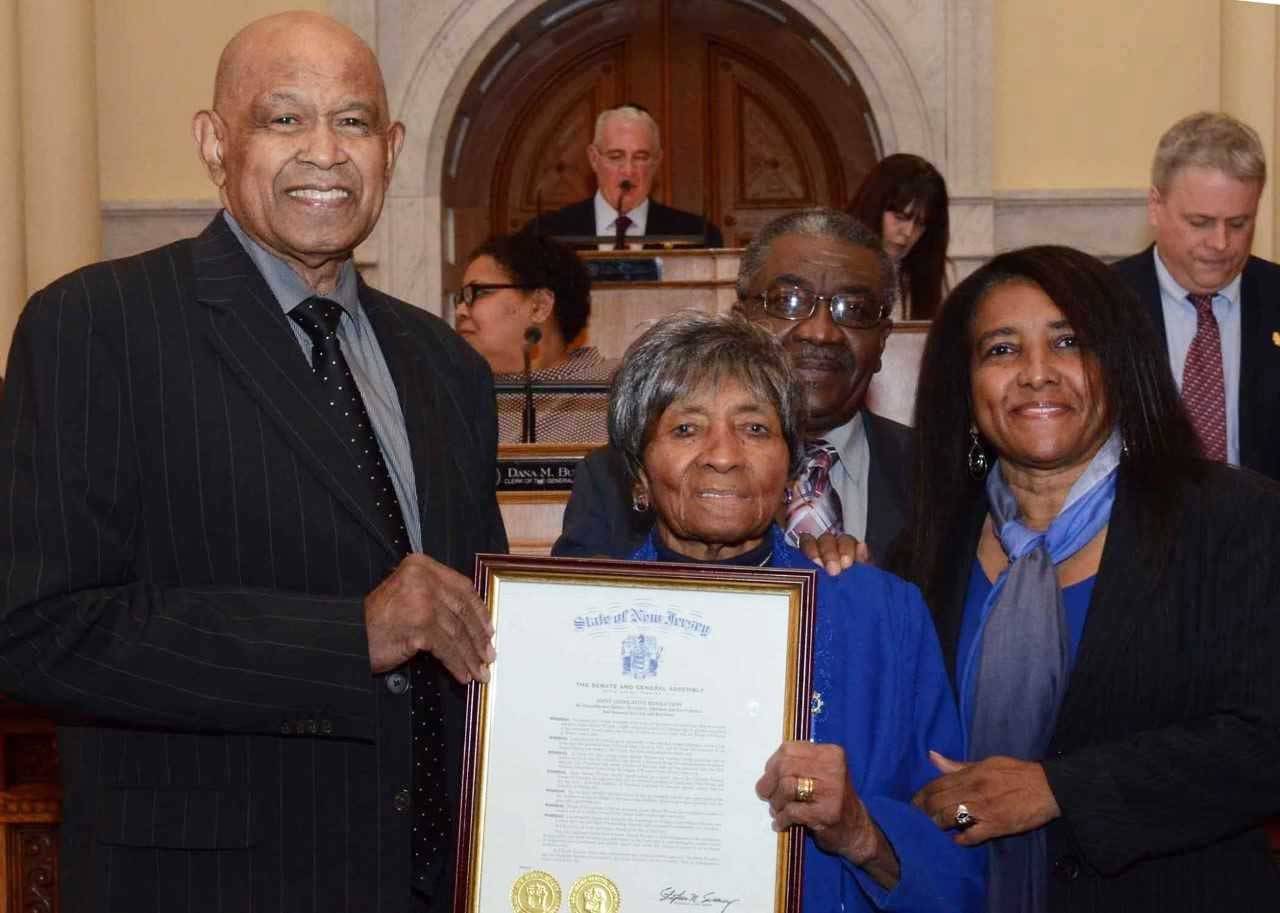 Laura Wooten was honored with a Joint Legislative Resolution by the State of New Jersey in 2016 for her “peerless record of dedication and commitment” as an election poll worker.

In a 2018 University interview, Wooten said: “Voting is your voice so if you don’t go out and vote for things, there will never be any changes. That’s the only way you’ll get changes, is to vote. The privilege in a democracy of being able to vote means a lot to me.”

Wooten, who moved to Lawrence Township, New Jersey, later in life, spent her last Election Day in 2018 working at the polls from dawn to late evening. Her dedication was spotlighted by NBC Nightly News and recognized by Vice President Kamala Harris, who was a senator at the time. “Vote every time. Let nothing and no one stop you because your vote is your voice,” Wooten told NBC News.

Wooten has been recognized for her service by the New Jersey State Senate, municipality of Princeton and a number of organizations including the League of Women Voters of New Jersey; the National Association of Secretaries of State; the New Jersey chapter of the NAACP; and the National Newspaper Publishers Association, a trade association of more than 200 African American–owned community newspapers in the United States.

Wooten was a University staff member for more than 27 years. Before that, she worked as a nurse’s aide at Princeton Medical Center for 18 years and was a teaching assistant at Community Park School in Princeton.

She was well-known among faculty, students and staff, engaging everyone in conversation as she checked meal cards at the entrance of Butler College dining hall. Two of her grandsons also work on campus: Caasi Love, assistant director of finance and planning for the School of Engineering and Applied Science, and Isaac Love III, a custodian in Building Services. They are among Wooten’s 16 grandchildren and 31 great-grandchildren.

While Wooten was beloved by the campus community, the honorific naming is intended to recognize her service to the nation and contributions to the democratic process rather than her service as a Princeton employee.

“She never served as an elected official, worked in government, or even graduated from college, but she helped to safeguard one of the fundamental pillars of democracy: the right to vote,” Lew-Williams wrote on behalf of the CPUC Naming Committee. 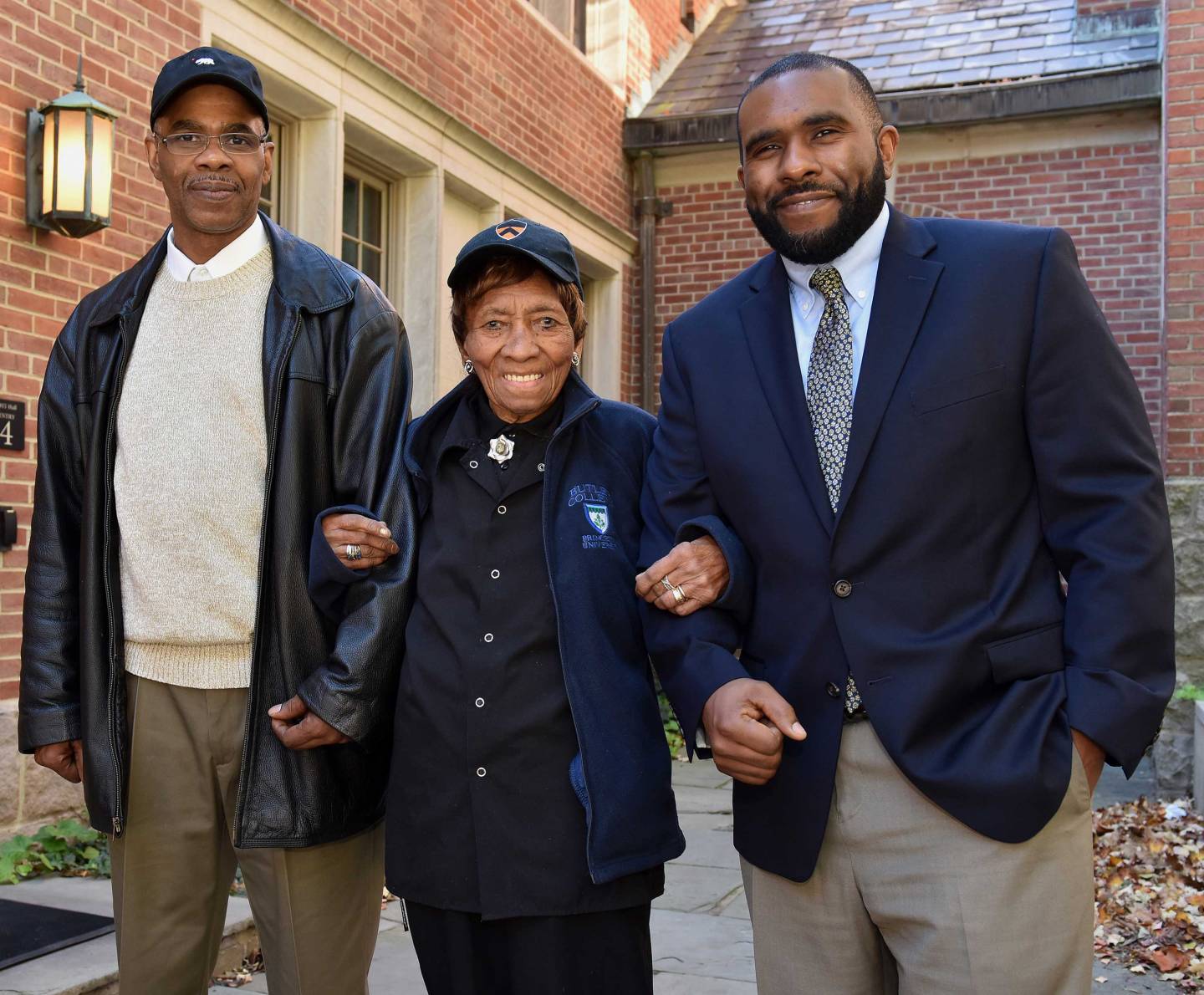 Wooten takes a stroll on the Princeton campus in 2018 with two of her grandsons who work at the University: Isaac Love III (left), a custodian in Building Services, and Caasi Love (right), assistant director of finance and planning in the School of Engineering and Applied Science.

She added: “Laura Wooten was a Black woman who was educated in Princeton’s segregated public schools and worked at Princeton’s segregated hospital, but she never lost faith in the democratic system. She believed that everyone’s vote mattered and made it her personal duty to ensure citizens’ voting rights at the polls. Her dedication to service in honor of the democratic process — without compensation or recognition — aligns with core University values.”

Melissa Lane, Class of 1943 Professor of Politics and director of the University Center for Human Values (UCHV), said Wooten had an unparalleled record of civic service.

“Laura Wooten is an exemplar of someone who took responsibility for maintaining the civic fabric of our democracy,” Lane said. “Studying in a building named for her will inspire the work of students in UCHV’s Program in Values and Public Life.”

The Board of Trustees referred Marx Hall to the CPUC Committee on Naming after it was determined the donor and namesake was unable to fulfill his pledge.

Pursuant to the University’s Policy on Naming of Programs, Positions, and Spaces, honorific namings should recognize rare or exceptional levels of achievement, contributions to the University, and/or commitments to advance core University values. Those honored should have to their credit achievements or virtues that the University hopes its students would seek to emulate. The University should also take into account its aspiration to be diverse and inclusive.

Since 2016, the University has named the following spaces on campus with input from the CPUC Committee on Naming.