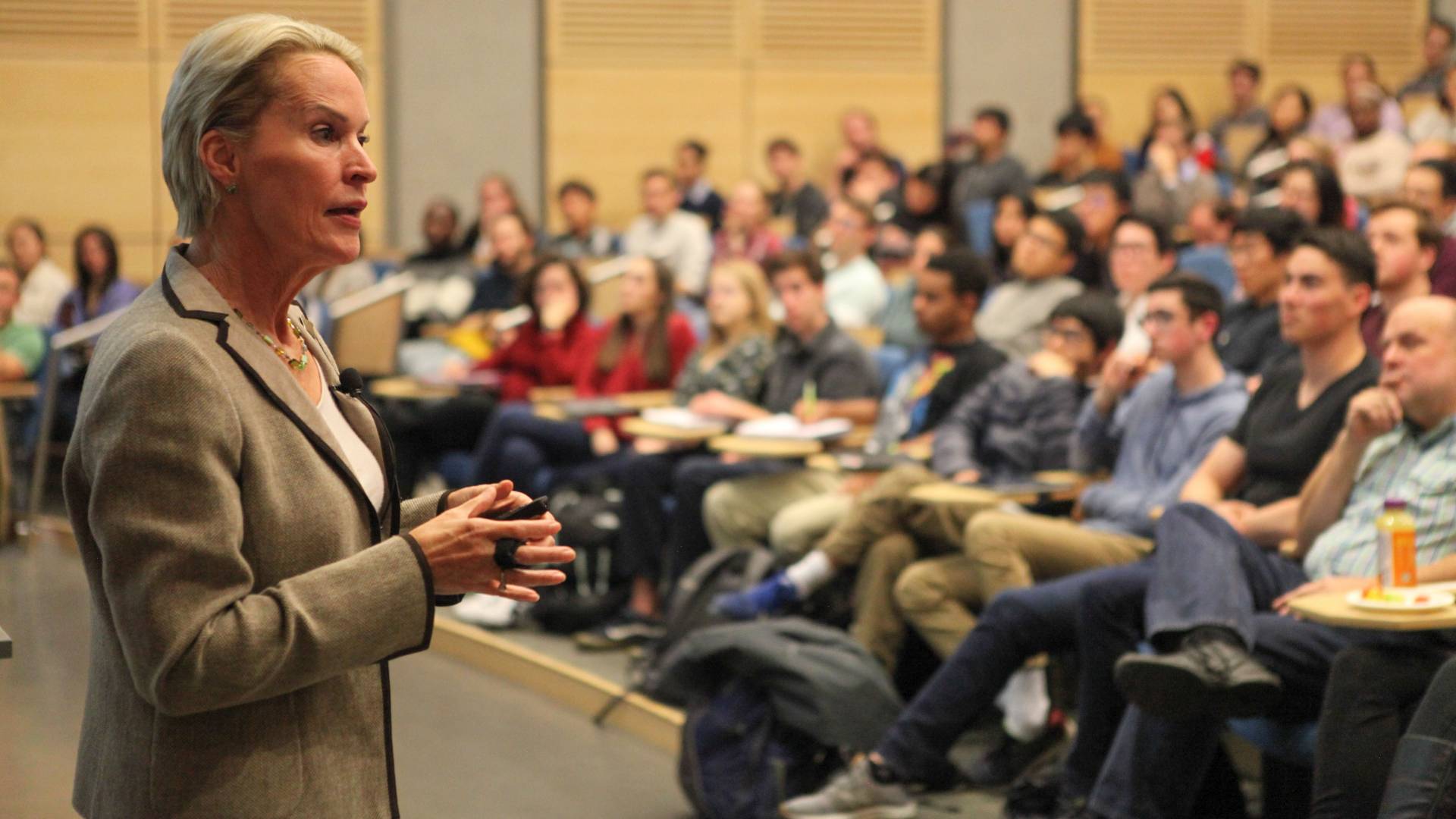 Frances Arnold, who won this year’s Nobel Prize in Chemistry, delivers a research seminar during her day-long visit to Princeton University on Oct. 26. Arnold is the first Princeton alumna to win a Nobel Prize and the first undergraduate alum — male or female — to win in the natural sciences.

On Oct. 26, several groups of Princetonians got to sit down with Frances Arnold of the Class of 1979, who won this year’s Nobel Prize in Chemistry.

She came to campus to give a short talk at the Fall Organic Chemistry Symposium, hosted by the Princeton section of the American Chemical Society. The talk has been scheduled for months, but after Arnold won the prize, becoming only the fifth woman ever to do so — and the first Princeton alumna to win any Nobel Prize — she found herself much more sought after to speak to groups and individuals across the campus. 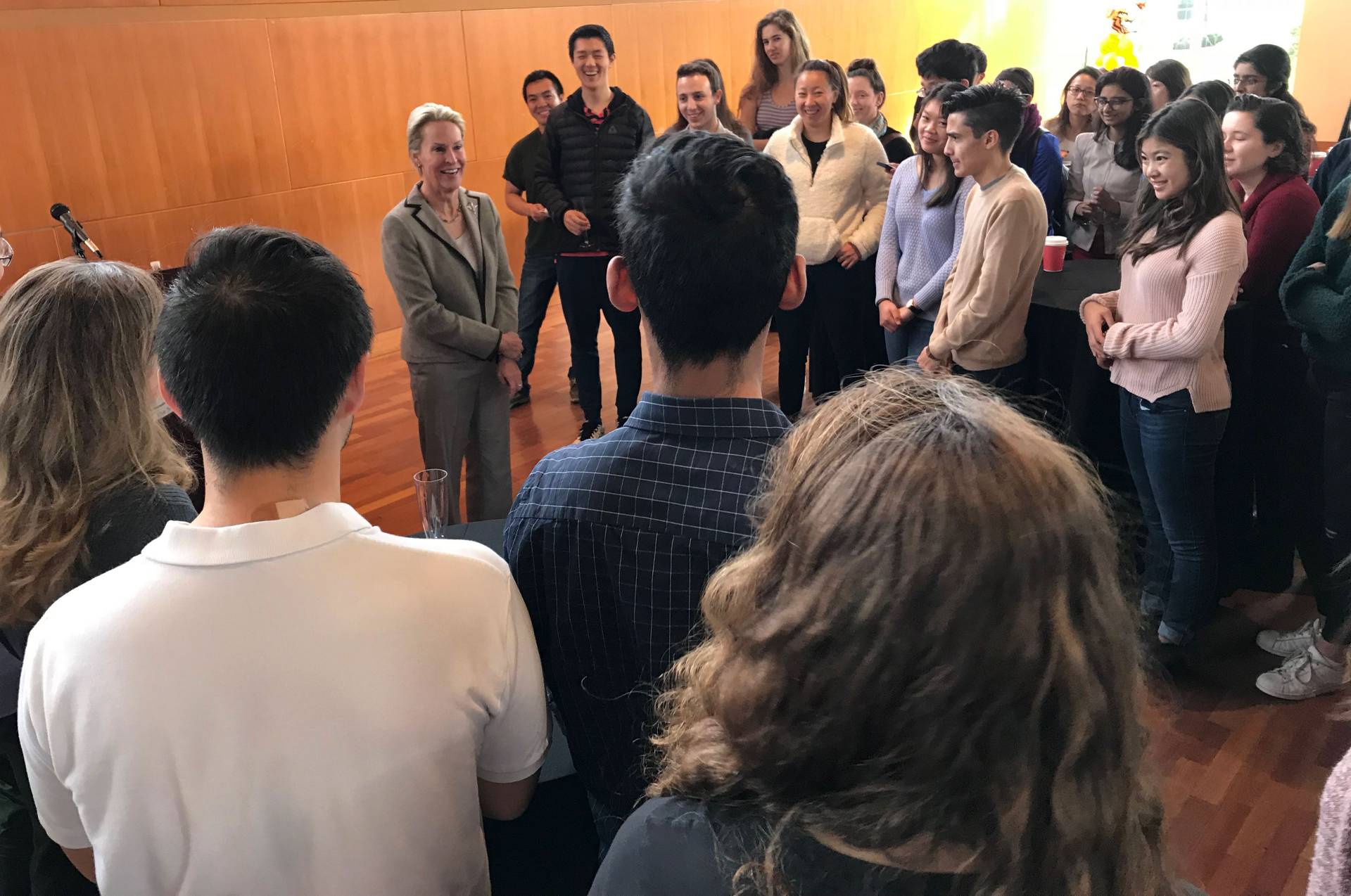 Arnold shares stories and inspiration with engineering students and faculty at a 9 a.m. reception.

Throughout the day, Arnold, who graduated with a degree in mechanical and aerospace engineering, fielded questions about the future of women in science, technology, engineering and mathematics (STEM) and her own career trajectory, but she seemed most excited to talk with current researchers about their ongoing work.

At a midday lunch with graduate students, she brushed aside a question about standing shoulder-to-shoulder with scientists like Albert Einstein or Marie Curie. “There’s plenty of ordinary Nobel laureates,” she said. “You’re thinking of the icons. I want to be just an ordinary one.”

Your ability to move and adapt [gives] you the flexibility and also the creativity that allows you to put crazy new ideas together. So I hope you will take the opportunity while you are at this magnificent learning institution to fill your thoughts with things outside of what you are doing in the laboratory and really do learn to read, write and think broadly.

Arnold started her day at the Fields Center, where more than 100 engineering students and faculty came to greet and congratulate her. During the hour spent answering questions and posing for photographs, Arnold reminisced about her undergraduate experience and cited the influence of her adviser Robert Socolow, an emeritus professor of mechanical and aerospace engineering, in shaping her approach to research: “It was the leadership and mentorship of people like that who taught me that engineers could have a big impact — by being engineers but also by thinking about some of the bigger policy issues and impact that technology has on society overall,” Arnold said.

She encouraged the students to think broadly and take advantage of the diverse opportunities at Princeton. “It’s a remarkable thing that an engineer is given the time to explore lots of different opportunities,” she said, recalling how her foundation in the liberal arts “has enabled me to go into many different areas in my career and make connections that I would not have been able to do otherwise.”

She told the young engineers: “I am a student of evolution and adaptation. We all live in a rapidly changing world and all sorts of things are going to happen to you. You will have control over some of them, but lots of them — changes in administration, a company going bankrupt, loss of loved ones — you won’t have any control over, so it’s your ability to move and adapt that will give you the flexibility and also the creativity that allows you to put crazy new ideas together. So I hope you will take the opportunity while you are at this magnificent learning institution to fill your thoughts with things outside of what you are doing in the laboratory and really do learn to read, write and think broadly.” 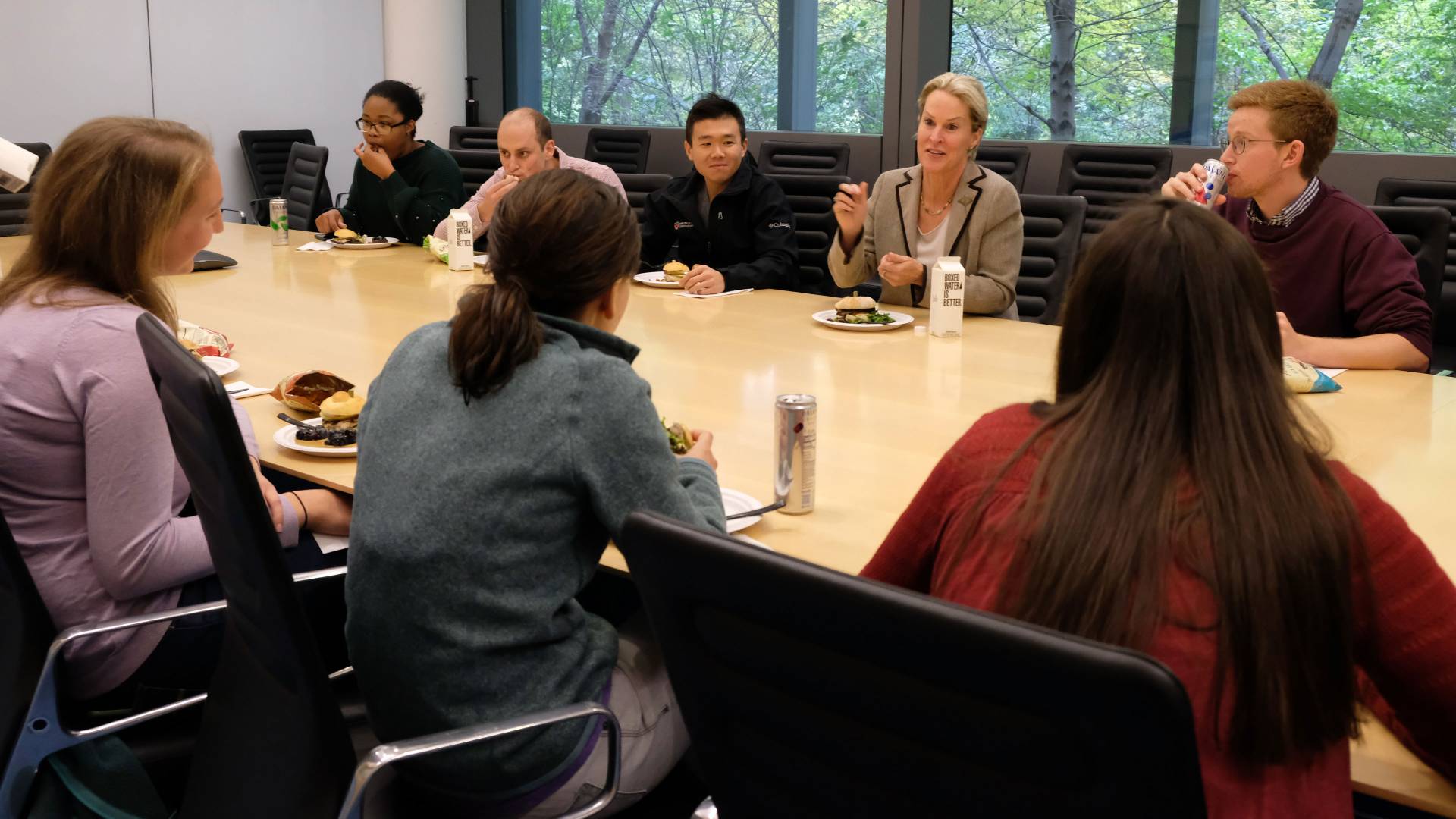 She expanded on that idea later in the day, saying, “I did all sorts of things that you wouldn’t normally find on an engineer’s docket, but it made an educated person out of me.” Arnold rattled off a list of non-engineering courses she had taken, ranging from Russian literature to economic theory. “I can’t imagine not being able to read and write, or make these connections from literature and philosophy that have helped inform my understanding of evolution,” she said.

“I never thought I would be a mechanical engineer,” Arnold said. “I wanted to be an educated person and find out what it was that I wanted to do.” She recalled being welcomed into an Italian language table when she decided she wanted to learn that language. She added, “If you learn what people are interested in, you make lifelong friends. The people that I met at those dining tables, for example, are friends that I still have today.”

After leaving the engineering reception, Arnold recorded an episode of the newly launched She Roars Podcast that will air in early November. She then spoke with several faculty members before an intimate lunch with 14 graduate students in chemistry, where skills gained during her decades as a college professor — she has taught at the California Institute of Technology since 1986 — were on display as she chatted with each student about their background and studies. 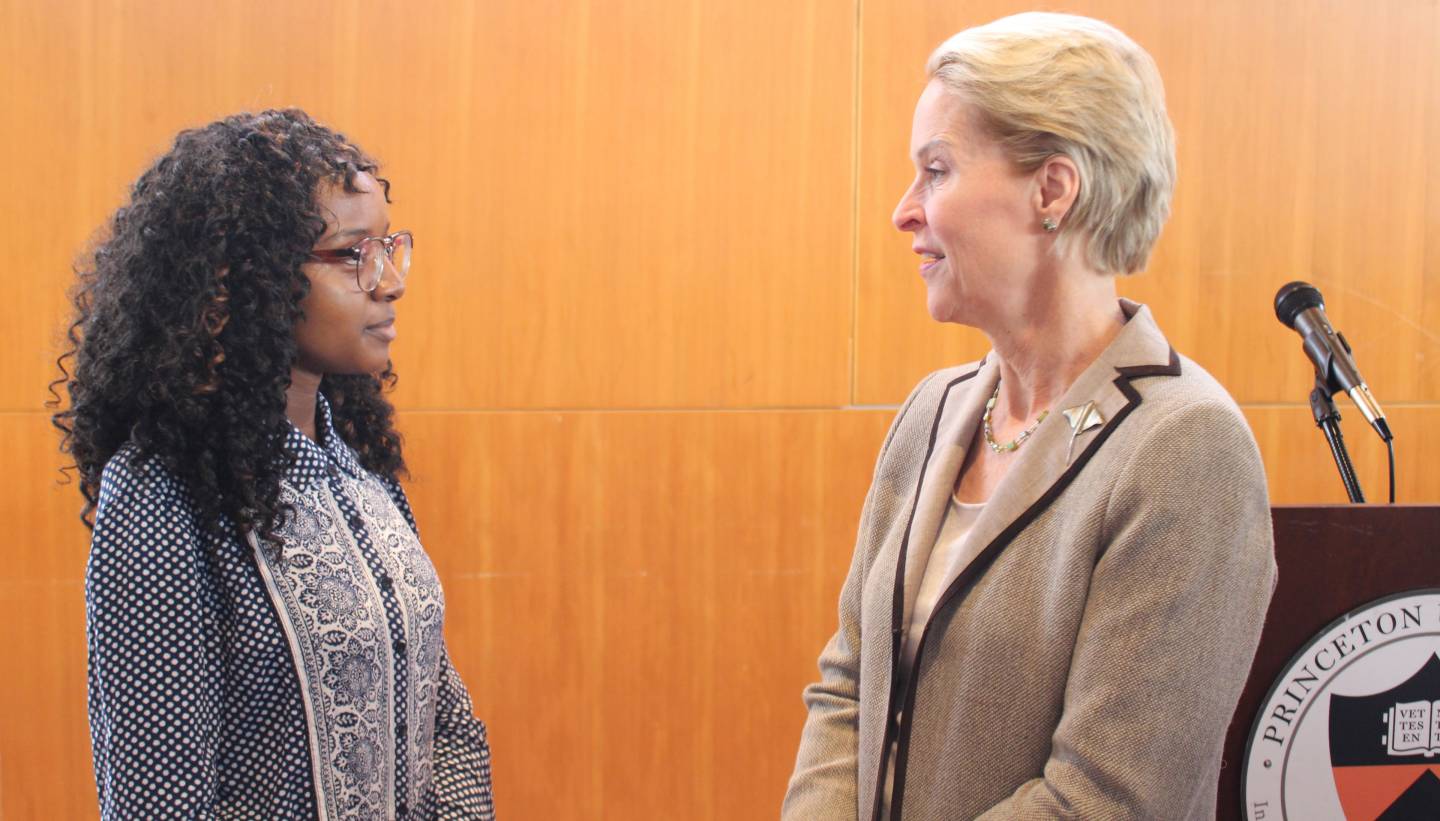 She told a South African student about her four months living in Cape Town during her sabbatical year, for example, and she raised thoughtful questions or shared jokes with each of the young researchers. When Alyssa Ertel, a graduate student in chemistry professor Abigail Doyle’s lab, talked about her own research in synthetic chemistry, Arnold said, “Everyone keeps asking me, 'Where are all the women Nobel Prize winners?' I said, 'Check back next year, and the year after that, and the year after that.' There are great women doing synthetic chemistry.”

After the lunch, Arnold delivered her symposium to a standing room-only crowd in Frick Chemistry Laboratory. “The lecture you see today is my old lecture,” she said. “I haven’t changed anything because I haven’t had time … I haven’t had a moment to rub two neurons together” since getting the pre-dawn call from Stockholm on Oct. 3.

When she got the call, awakening her from a deep sleep, her first thought was fear that something had happened to one of her children. “I’m a mother — mothers don’t ignore the phone,” she said. “That moment was first terror, that there was some problem at home, then quickly replaced by exhilaration.”

Over the course of the day at Princeton, she repeatedly noted how her years at the University contributed to her later career. “I’m grateful for the opportunity I had at Princeton, because I got a very good, foundational education,” she said. “If you want a great education — a great, broad education — and to be surrounded by thinking people, people who care about how our society moves into the future, this is an excellent place to do that.” 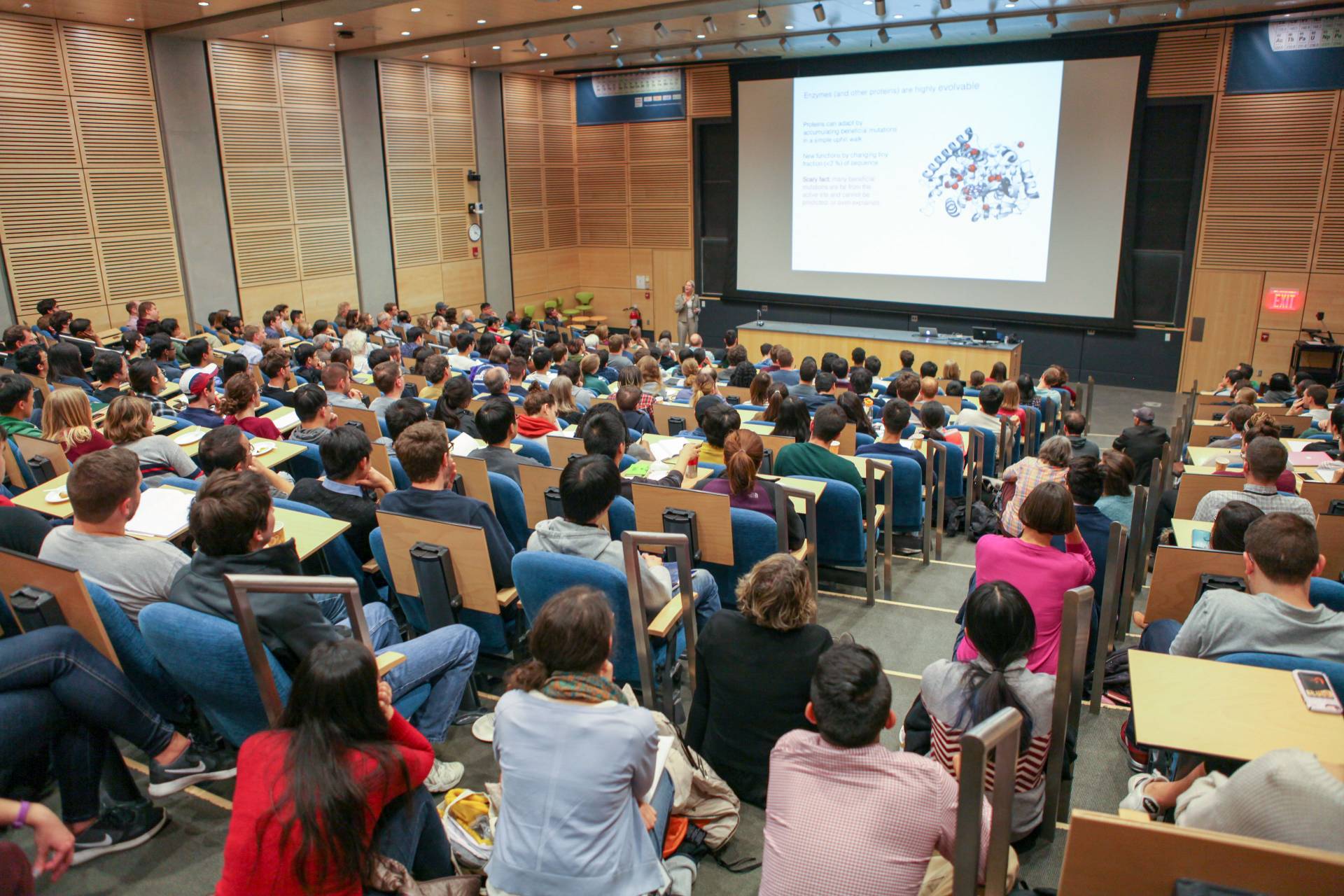 Arnold discusses her research with a standing room-only crowd in Frick Chemistry Laboratory.