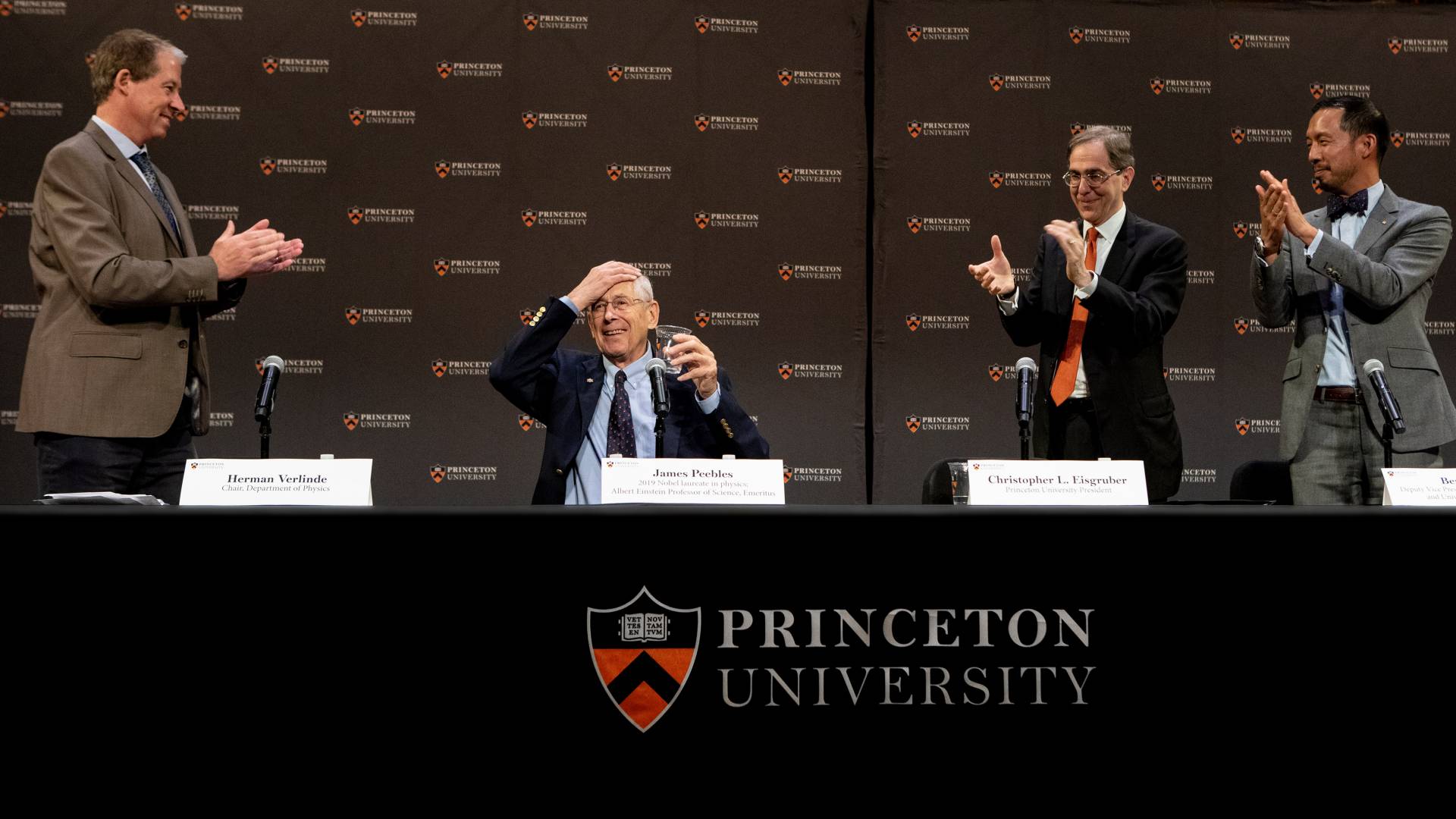 Princeton University professor James Peebles, the Albert Einstein Professor of Science, Emeritus, has been awarded a share of the 2019 Nobel Prize in Physics for his theoretical discoveries in physical cosmology. Pictured: Peebles (second from left), who earned his Ph.D. at Princeton in 1962 and taught at the University his whole career, enjoys a standing ovation during a news conference on campus with Herman Verlinde, the Class of 1909 Professor of Physics and chair of the Department of Physics (left), Princeton President Christopher L. Eisgruber (second from right) and Ben Chang, deputy vice president for communications and University spokesperson.

Early in the morning on Tuesday, Oct. 8, Princeton physicist James Peebles got a call from Sweden. His first thought was, “When you receive a phone call that early in the morning, it’s usually something horrible — or it’s this!”

The “this” turned out to be the 2019 Nobel Prize in Physics. Peebles, the Albert Einstein Professor of Science, Emeritus, and professor of physics, emeritus, had won the prize for “theoretical discoveries in physical cosmology.” 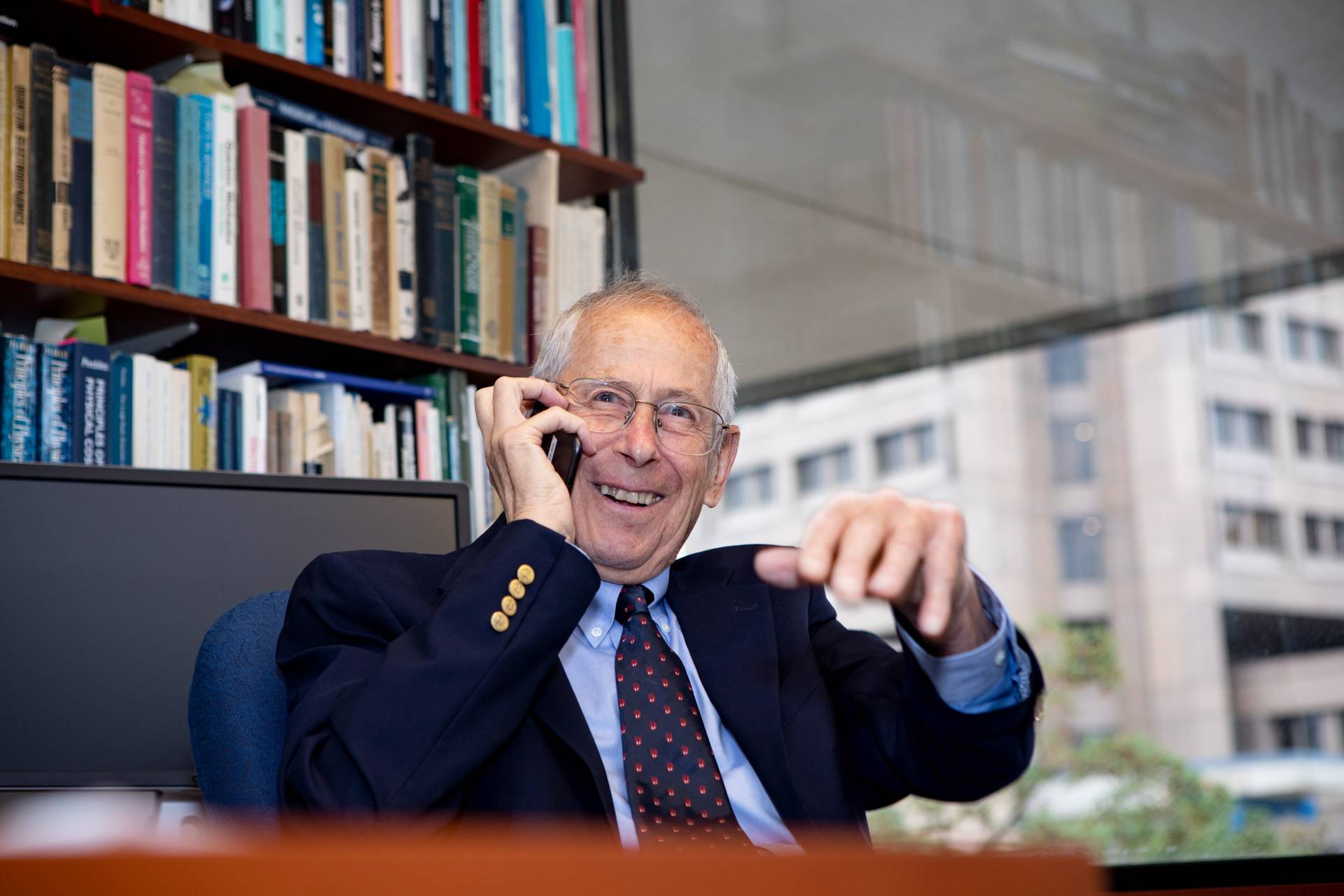 Peebles, who came to campus after receiving an early-morning phone call from Sweden announcing his award, takes a phone call from the media in his office in Jadwin Hall.

“James Peebles’ insights into physical cosmology,” the Royal Swedish Academy of Sciences said, “have enriched the entire field of research and laid a foundation for the transformation of cosmology over the last 50 years, from speculation to science. His theoretical framework, developed since the mid-1960s, is the basis of our contemporary ideas about the universe.” 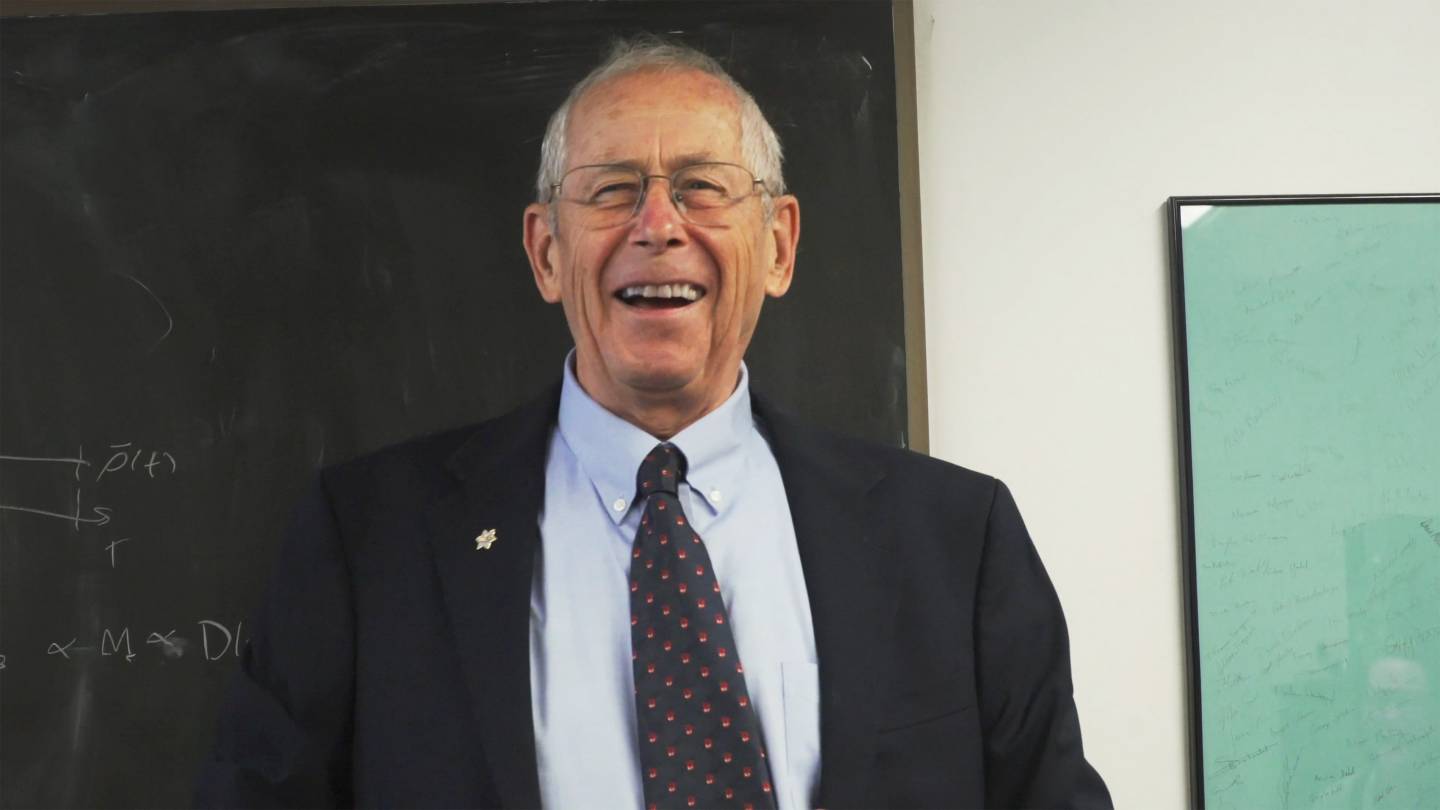 James Peebles was awarded the Nobel Prize in Physics Oct. 8, and celebrated with the University community.

Video by Danielle Alio and Denielle Avila, Office of Communications

Physical cosmology is the branch of physics and astrophysics that deals with the study of the physical origins, evolution and structure of the universe. It’s the branch that asks and tries to answer some of physics’ biggest questions: How did the universe begin? What is it composed of? Will the universe have an end? What is its eventual fate? These are the questions Peebles has grappled with throughout his career at Princeton, from the early 1960s through to his transfer to emeritus status in 2000.

Kip Thorne, a 1965 graduate alumnus in physics who won the 2017 Nobel Prize in Physics and is the Feynman Professor of Theoretical Physics, Emeritus, at the California Institute of Technology, said: “Jim’s Nobel Prize is so wonderfully deserved! When I was a grad student I watched in awe as he scoped out the creation of elements by nuclear burning in our universe’s first three minutes. He was an inspiration to me and has remained so throughout my career.” 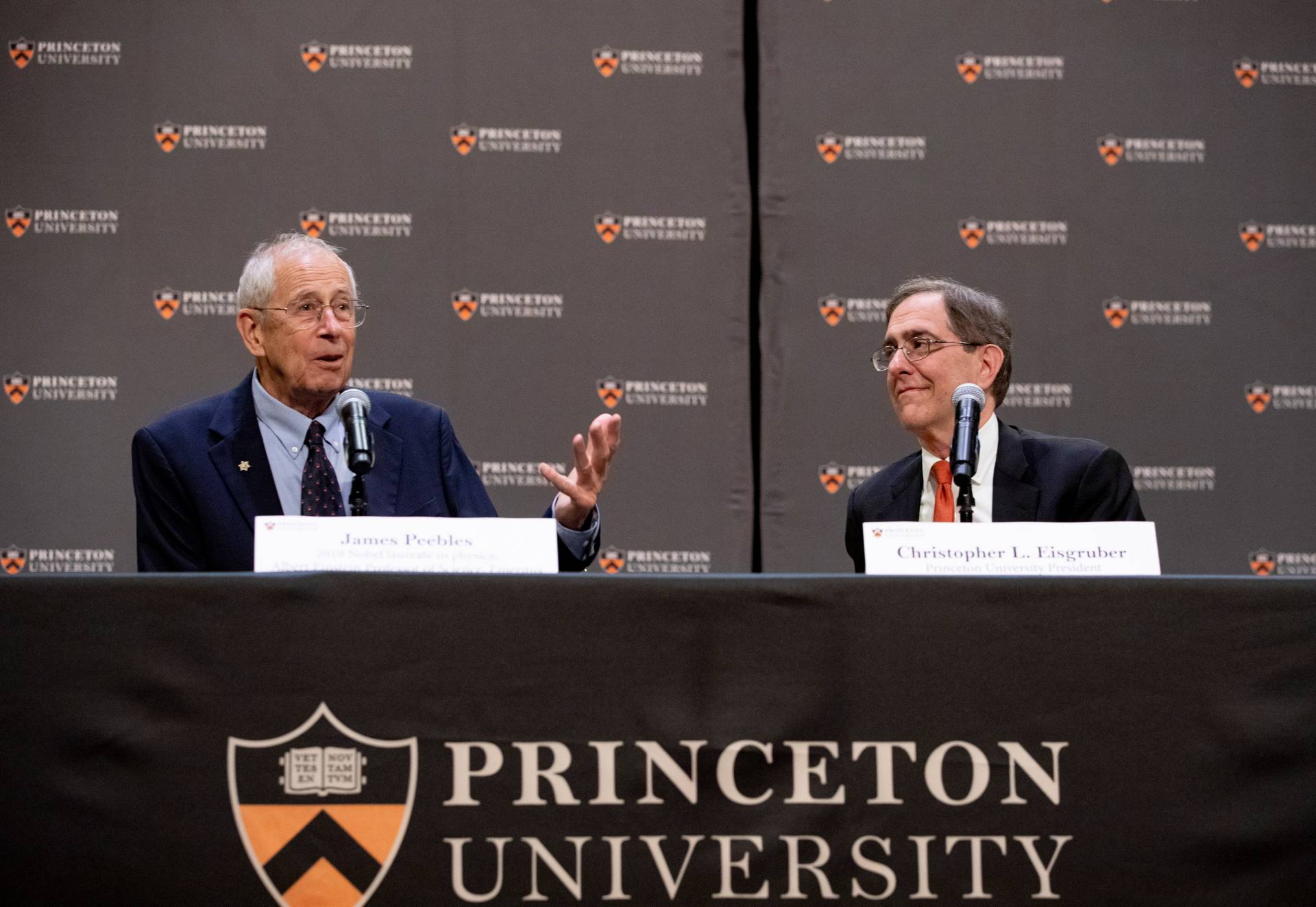 Peebles takes questions from the media and students at a news conference held in Richardson Auditorium, as Eisgruber, a 1983 alumnus who majored in physics and took a class with Peebles as an undergraduate, looks on.

Peebles was born in 1935 in St. Boniface, near Winnipeg in Manitoba, Canada. He was a curious child who liked tinkering with gadgets and building things. "One of my earliest memories was throwing a tantrum because I wasn't allowed to put together the coffee percolator,” he said. “I loved to take things apart and put them back together. I loved the way things work." 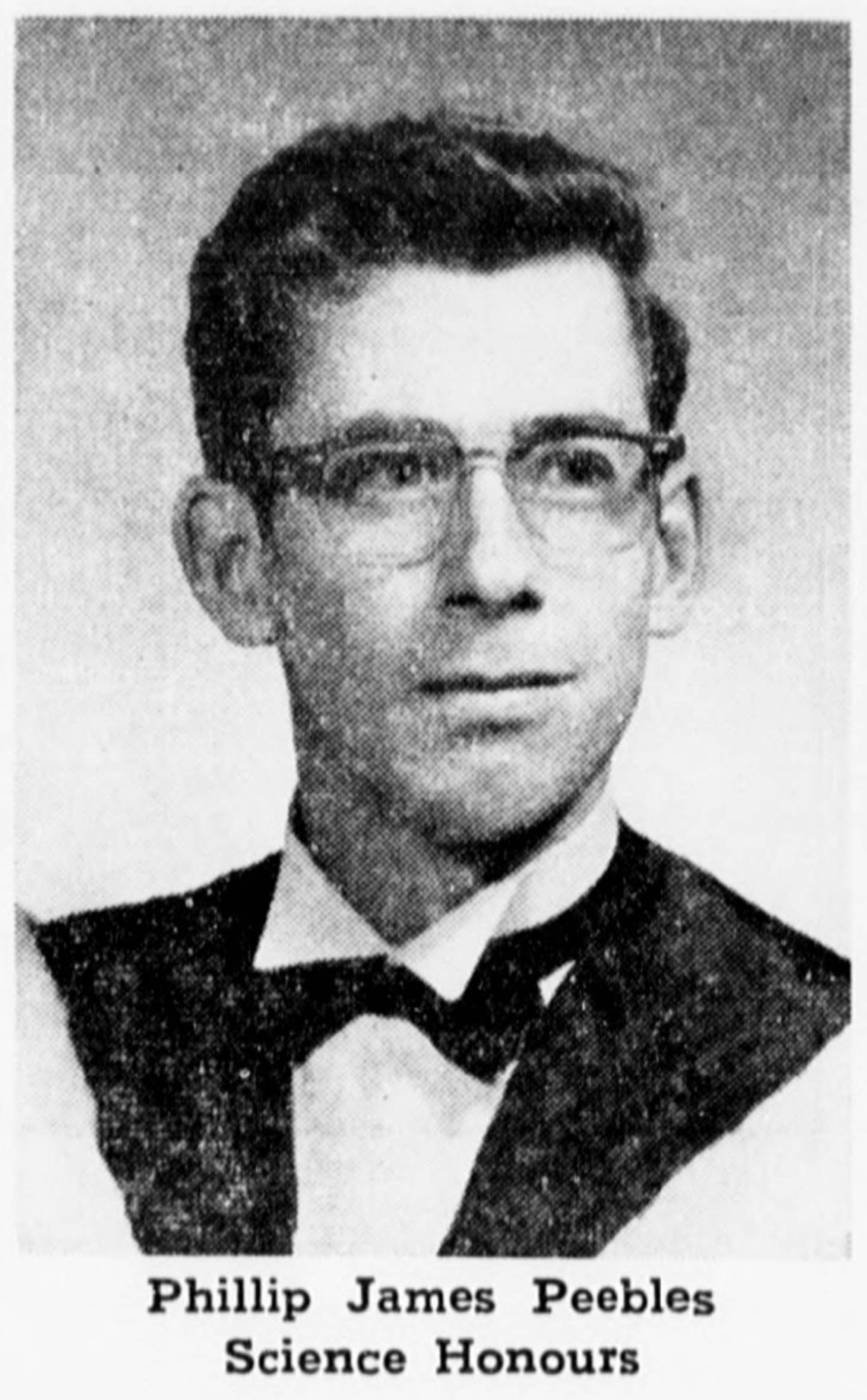 Peebles, who attended the University of Manitoba for his undergraduate education, is shown here in his 1958 Brown and Gold yearbook.

Peebles carried this curiosity to the University of Manitoba where he received his bachelor’s degree and then in 1958 proceeded to Princeton. It was there, he said, that he fell in love with physics. But his first choice was particle physics — the study of subatomic particles that make up the universe — rather than cosmology. His academic adviser, Robert Dicke, however, had different ideas. Dicke, a physicist who specialized in gravity, persuaded the young graduate student to study gravity physics.

When Peebles was asked in a morning interview about how he felt when he learned he’d received the prize, he was candid. “I’ve been working in cosmology since 1964,” he said. “That’s 55 years. I don’t want to be immodest, but it seems logical to give me the award. I’ve been in the subject and seen it grow from a very small science to an immense science and make enormous progress.”

When Peebles began his work in physical cosmology, however, he was one of only a handful of scientists tackling questions of a cosmological nature. Many researchers viewed the field as a dead end.

“When I started working in this subject back in 1964,” he said, “it was easy for me as a postdoc to do original research because there were only a handful of people across the world doing cosmology. After a few conferences I got to know most of them.” 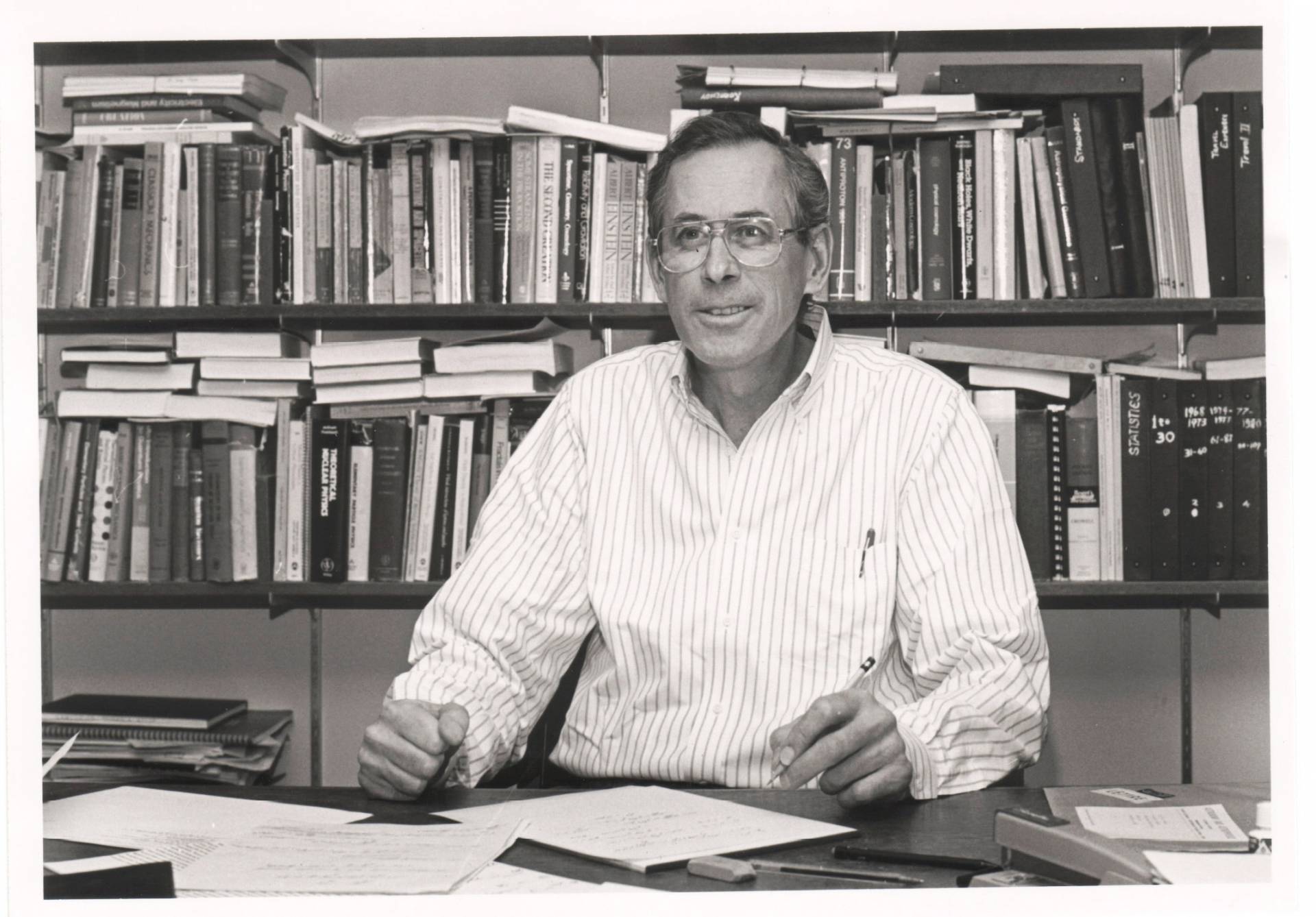 Peebles, shown here in 1990, became an assistant professor at Princeton in 1965, associate professor in 1968 and full professor in 1972. He transferred to emeritus status in 2000.

Today, the field has ballooned as a new generation of researchers have entered the discipline and added their own perspectives. “It’s a very different situation today,” Peebles added. “Sciences evolve.”

Peebles is optimistic and excited about what discoveries the future will bring. “Physics is a rich subject,” he said, “but it is always changing, with many challenges addressed and many challenges opening up.”

Perhaps his most well-known achievement is the theory of cold dark matter, which Peebles initially proposed in 1982, and his pioneering efforts in identifying cosmic background radiation as the remnant of the Big Bang.

“I find it amazing always to consider that nature operates by rules that we can discover,” he said. 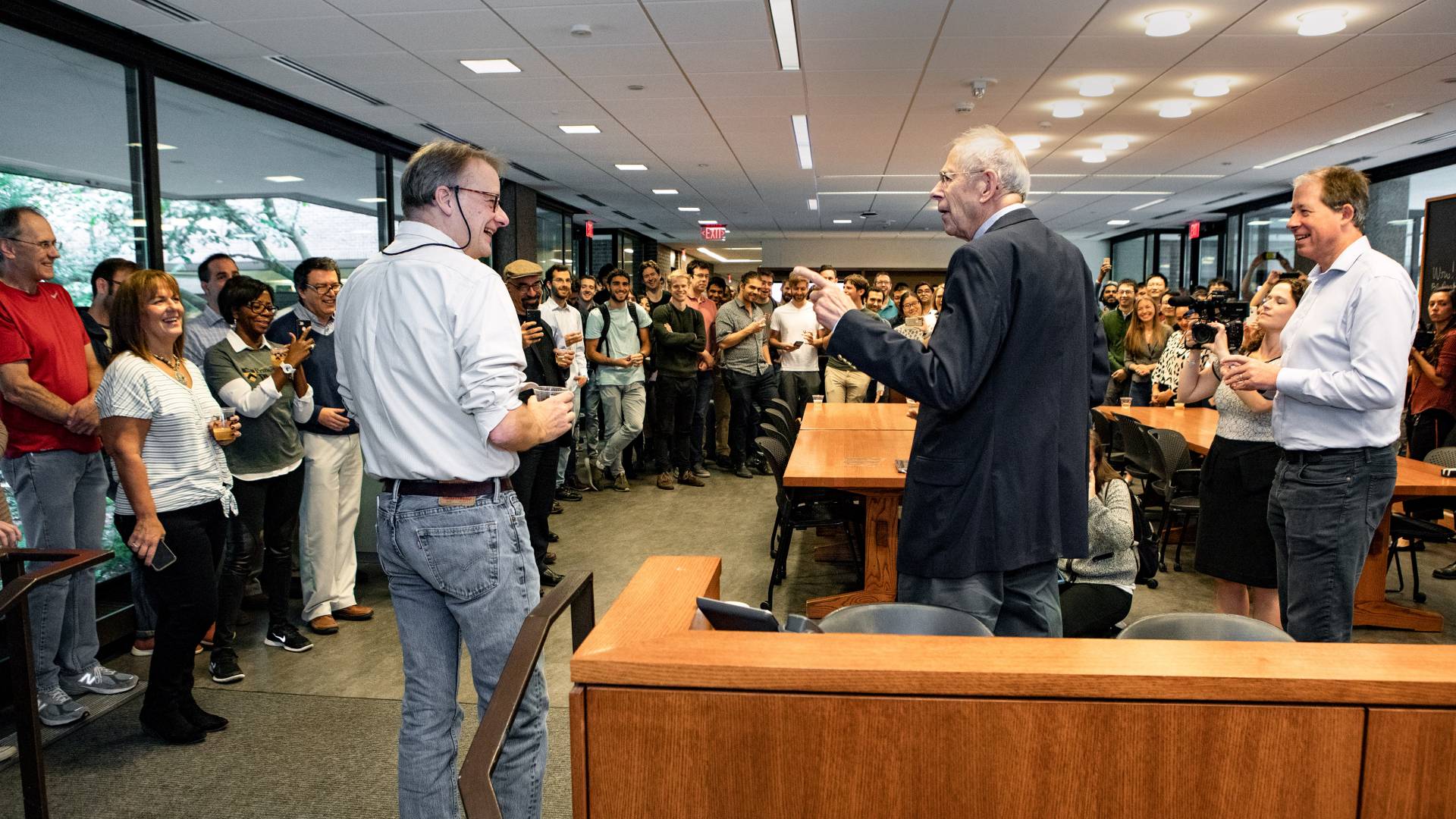 “Jim Peebles is an extraordinary physicist, a man who has thought deeply and clearly about the structure of the universe,” Princeton President Christopher L. Eisgruber said at an afternoon news conference in Richardson Auditorium. “He exemplifies both Princeton’s tradition of brilliant, pathbreaking research in physics, cosmology and gravitation as well as this University’s commitment to put its best scholars in the classroom.”

Herman Verlinde, the Class of 1909 Professor of Physics and chair of the physics department, lauded Peebles for his pioneering work as a theoretical cosmologist “long before it was popular,” and having “laid the foundation for almost all of modern cosmology.” 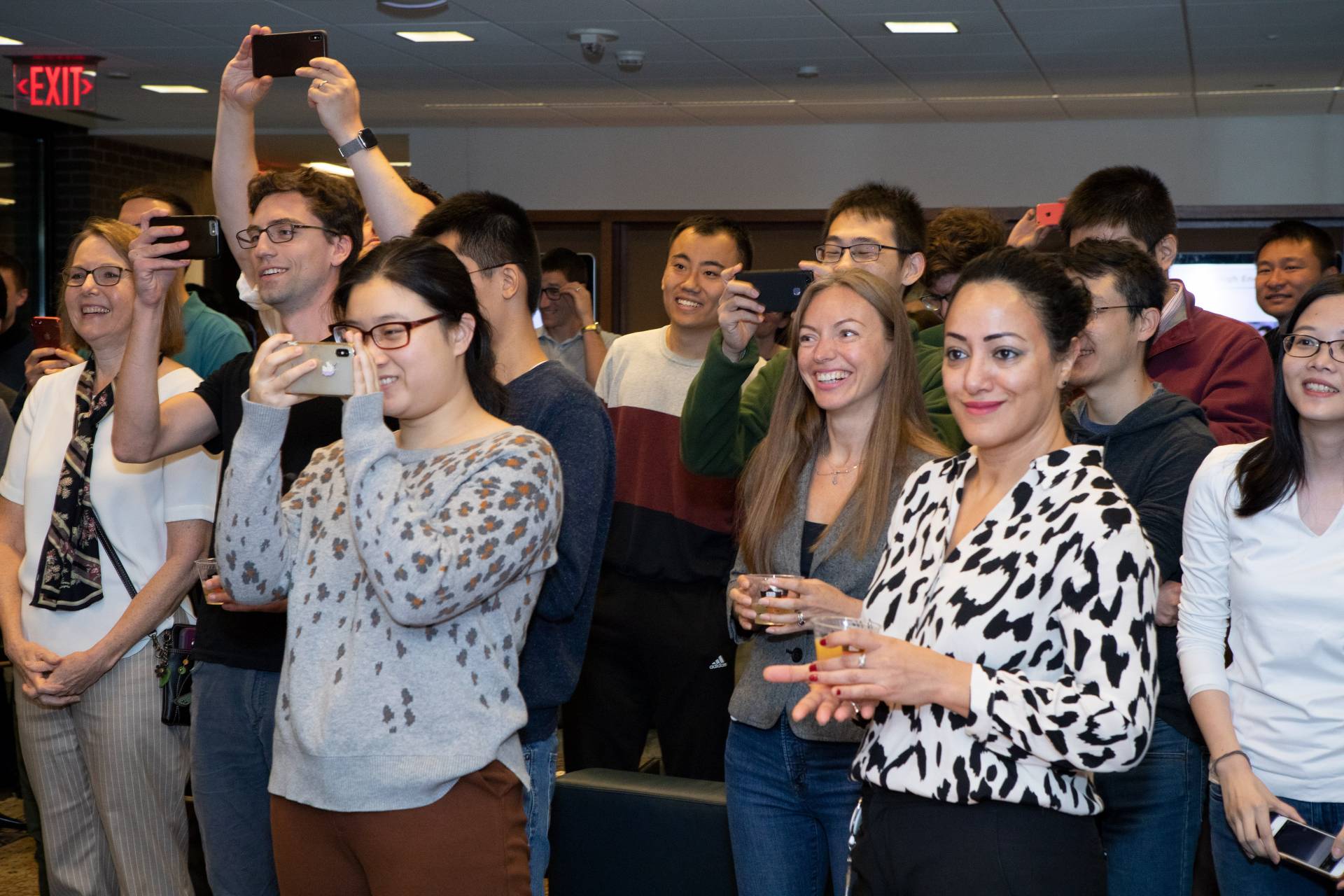 At a reception for Peebles in Jadwin Hall, students and staff members of the Department of Physics snap photos and greet him with cheers and applause.

Looking out into the auditorium filled with his colleagues, students and the larger University community, Peebles expressed his gratitude in receiving the award and described his career in the sciences as a “joy ride.”

“I don’t know think you can imagine how good this makes me feel,” he said, to an audience that rose in a standing ovation — more than once.

In answering a question from a student about what advice Peebles would have, he said with endearing forthrightness, “My advice is not to aim for prizes or awards. We’re in this for the joy of research, the fascination, the love of science. … I remember being amazed that I could get paid for this.”

Another Princeton physics Nobel laureate in the auditorium, Joseph Taylor, the James S. McDonnell Distinguished University Professor of Physics, Emeritus, noted that Peebles also wrote an influential book about quantum mechanics, and asked if Peebles might develop a theory combining that subject with physical cosmology. 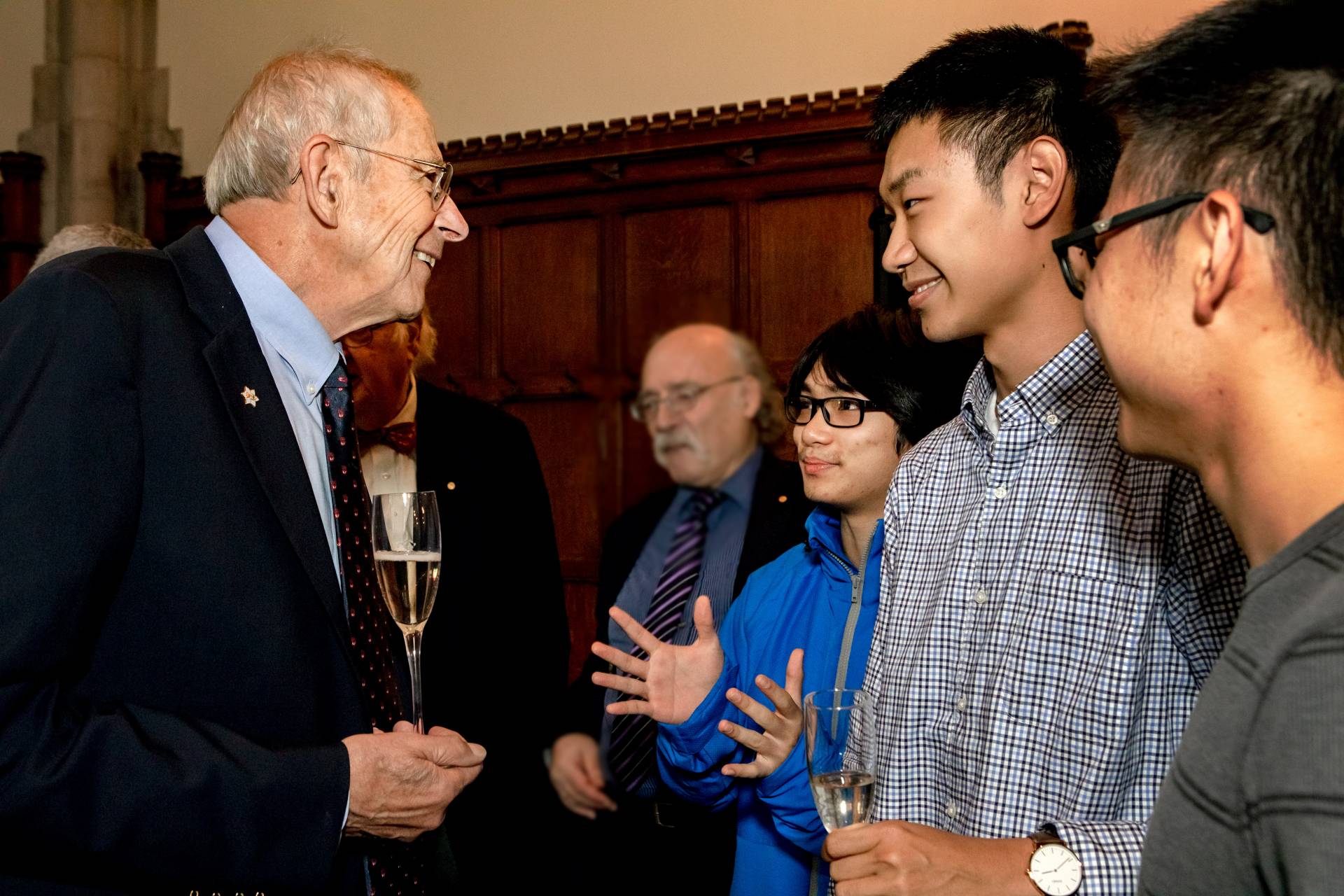 Peebles (left) chats with Duncan Haldane (second from left), professor of physics and the 2016 Nobel laureate in physics, and students (from far right) Kevin Lin, Edward Tian and Bryan To at an afternoon reception for all members of the greater University community in Rockefeller College Common Room.

“What a wonderful challenge for the next generation,” responded Peebles.

“This room is full of people who are on the way to making wonderful discoveries,” he said.

“The universe is capable of surprising us,” he said. “I don’t think there’s a final theory of everything. It’s theories all the way down. We can be very sure that my theory isn’t the final answer. And we can be very sure that as we discover new aspects of the expanding and evolving universe we will be amazed once again. I hope you guys hurry up and make those discoveries.”

Just as his students and colleagues commended Peebles for how much he has taught them, he returned the sentiment. “I have immensely benefited from knowing that when I have to stand up before students, I better know what I’m talking about.” 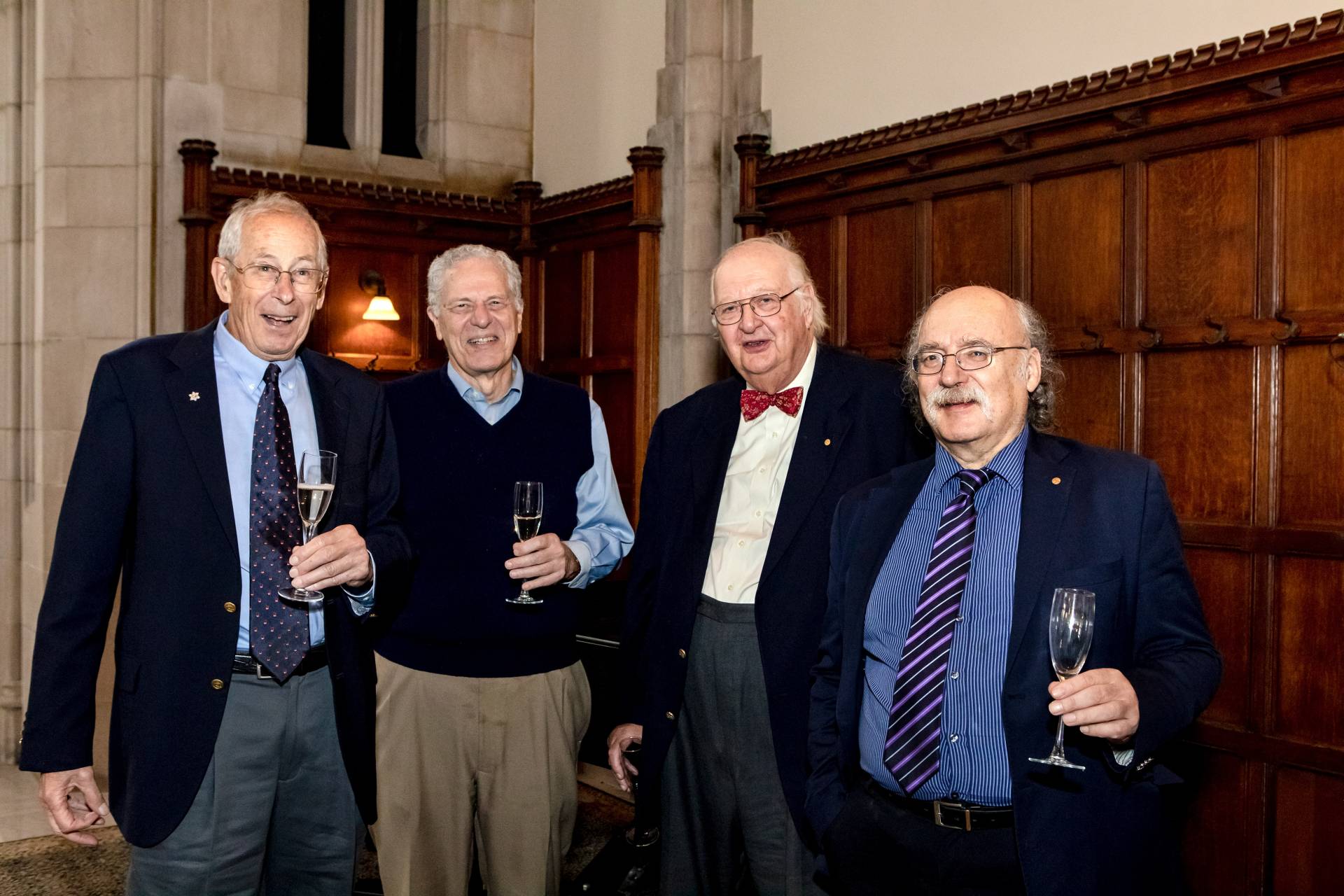 In a reception held in the Rockefeller College Common Room after the news conference, students and faculty expressed their admiration for their teacher and mentor — and the extraordinary atmosphere of being in the Princeton physics department.

Sophie Dvali, a first-year physics graduate student said, “It is especially amazing getting here to Princeton and all of a sudden someone in your department wins the Nobel Prize, and it’s not the first professor in your department to win the prize. We are walking around the department with all of these crazy smart people. It’s overwhelming.”

Songtian Zhang, a sixth-year Ph.D. candidate in physics, said: “I would run into him at the department tea time or he would sit in on conferences. He is one of those people who you see a lot and is so impressive. You get a sense that ‘Woah, he is very smart.’”