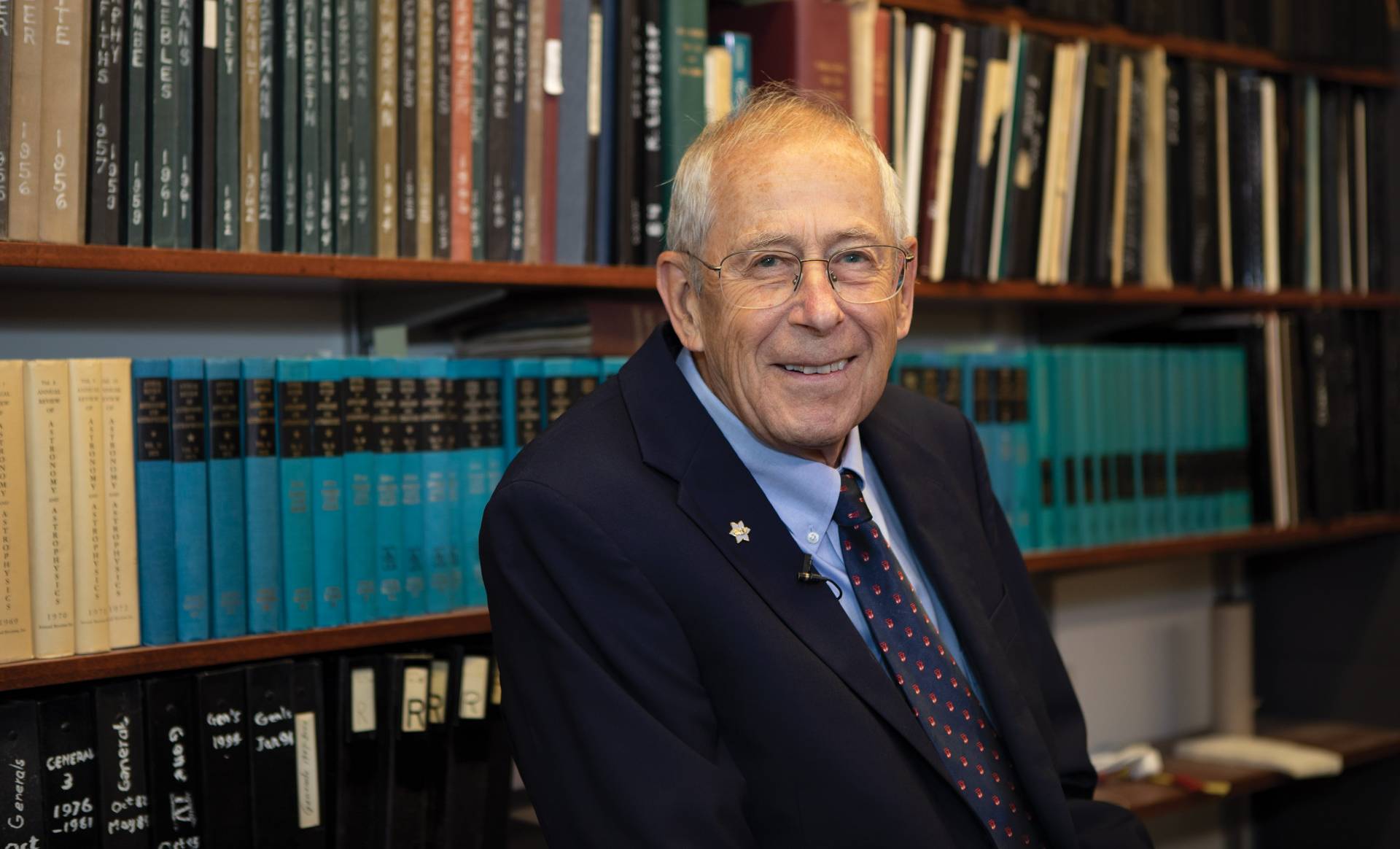 James Peebles, Princeton’s Albert Einstein Professor of Science, Emeritus, has been awarded a share of the 2019 Nobel Prize in Physics. Peebles earned his Ph.D. at Princeton in 1962.

Princeton University professor emeritus and 1962 graduate alumnus James Peebles has been awarded the 2019 Nobel Prize in Physics "for theoretical discoveries in physical cosmology."

“This year’s prize goes to contributions to our understanding of the evolution of our universe and Earth’s place in the cosmos,” Göran K. Hansson, secretary general of the Royal Swedish Academy of Sciences said today.

"This year's prize goes to contributions to our understanding of the evolution of our universe and Earth's place in the cosmos," Göran K. Hansson, secretary general of the Royal Swedish Academy of Sciences, said today.

"James Peebles took on the cosmos, with its billions of galaxies and galaxy clusters. His theoretical framework, developed over two decades, is the foundation of our modern understanding of the universe’s history, from the Big Bang to the present day," the academy said.

"When I started working in this subject — I can tell you the date, 1964 — at the invitation of my mentor, Professor Robert Henry Dicke, I was very uneasy about going into this subject because the experimental observational basis was so modest. ... I just kept going," Peebles said during the Nobel news conference by phone. "Which particular step did I take? I would be very hard-pressed to say. It’s a life’s work."

Princeton President Christopher L. Eisgruber, who received his degree in physics from Princeton in 1983, praised Peebles' contributions to the field and generations of students at Princeton.

"Jim Peebles is an extraordinary physicist, a man who has thought deeply and clearly about the structure of the universe," Eisgruber said. "He exemplifies both Princeton's dazzling tradition of fundamental research in cosmology and gravitation, and also this University's commitment to put its best scholars in the classroom. During my own time as a physics major, he was a popular teacher and a fixture in the undergraduate program, and I am among the many students who benefited from his superb instruction."

The honor "is so appropriate," said Lyman Page, the James S. McDonnell Distinguished University Professor in Physics. "No one else has advanced our fundamental understanding of the universe more. Multiple of his predictions were shown to be correct through measurements. On top of it, he is uncommonly thoughtful, gracious and kind."

"It is difficult to overstate Jim's contributions to humanity's understanding of our place in the universe," said Bill Jones, associate professor of physics. "In addition to laying a great deal of the theoretical groundwork for modern cosmology, Jim pioneered many of the methods that have made cosmology a predictive science and one that allows us to test our theories with observational data. Generous to his students and colleagues, I doubt a kinder soul has ever been so recognized. Congratulations, Jim!"

Peebles, born April 25, 1935, in Manitoba, Canada, received his B.S. from University of Manitoba in 1958 and earned his Ph.D. in physics from Princeton in 1962. He taught at the University for his entire career. He was an instructor and researcher in the early 1960s, then he became an assistant professor in 1965, associate professor in 1968 and full professor in 1972. He transferred to emeritus status in 2000.

The laureate joins a number of other Princeton faculty and alumni who have been awarded Nobel Prizes.

Among his many honors, Peebles received the 2005 Crafoord Prize with fellow Princeton astrophysicist James Gunn, also from the Royal Swedish Academy of Sciences. In 2004 he received the Shaw Prize, and gave this account: "When I started work on cosmology, in the early 1960s, I felt uneasy as well as excited, because the long extrapolation from well-established laboratory results to the physics of our expanding universe was supported by exceedingly limited empirical evidence. I remember thinking I might complete two or three projects in this subject and then move on to something less speculative. That never happened because each project led to ideas for others, in a flow that was too interesting to resist."

Peebles has published several books on cosmology that are considered classics in the field, and his upcoming book, "Cosmology's Century, An Inside History of Our Modern Understanding of the Universe," will come out in June 2020 from Princeton University Press.

"Imagine showing Lewis and Clark detailed satellite images of the Earth, the ultimate birds-eye views," said Suzanne Staggs, the Henry DeWolf Smyth Professor of Physics. "Jim Peebles has always had the equivalent of the satellite view, but of the entire universe — he holds in his head its entire scope and grandeur, but is able to drill down into its fine details and describe and interpret them. His book 'Physical Cosmology' is a marvel of depth and insight, written in brilliantly lucid prose. Of course it is a joy and privilege to hear him give a lecture, but it is also a pleasure to attend a lecture with him, as he is sure to have a dozen questions for the speaker, and those questions will illuminate the entire context of the lecture. He has truly contributed to our understanding of the universe in profound ways."

"Jim's prize is so well-deserved," said Jo Dunkley, professor of physics and astrophysical sciences. "We now have this story of how the universe came to be, from its earliest moments to the beautiful and rich cosmos around us today. Jim essentially wrote that story, making fundamental contributions to all of it. At the same time, he is kind and generous with his knowledge, and continues to ask the best questions in our research seminars. We are lucky to be around him."

"Jim Peebles is a giant in the field who pioneered the ideas and techniques that all of use in cosmology today," said Paul Steinhardt, the Albert Einstein Professor in Science and professor of physics. "His work has been transformative in moving our understanding of the hot expanding universe from qualitative to precise, in revealing the existence of dark matter, and for pointing out the puzzles that remain. I am so grateful to have him as my colleague."

"This is a great day for physics at Princeton and such a well-deserved recognition for a truly great scientist and colleague," said Herman Verlinde, the Class of 1909 Professor of Physics and chair of the department. "Jim is one of the true founding fathers of modern theoretical cosmology, and his work helped transform a speculative field into a respectable precision science with many exciting experimental discoveries. Scientists of Jim’s stature and impact are a very rare breed and we are very proud to have him as a colleague."

"I always remember Jim as my teacher, my friend and my role model for life," said Jer Yu, a 1969 graduate alumnus in physics and Peebles’ first graduate student.

Members of the media: If you have a request about the Nobel Prize winner, please send an email to mediarelations@princeton.edu with the words "Nobel Prize" in the subject line. Check the University homepage for updates. Images of James Peebles, video of the news conference and his C.V. are available for use by media.