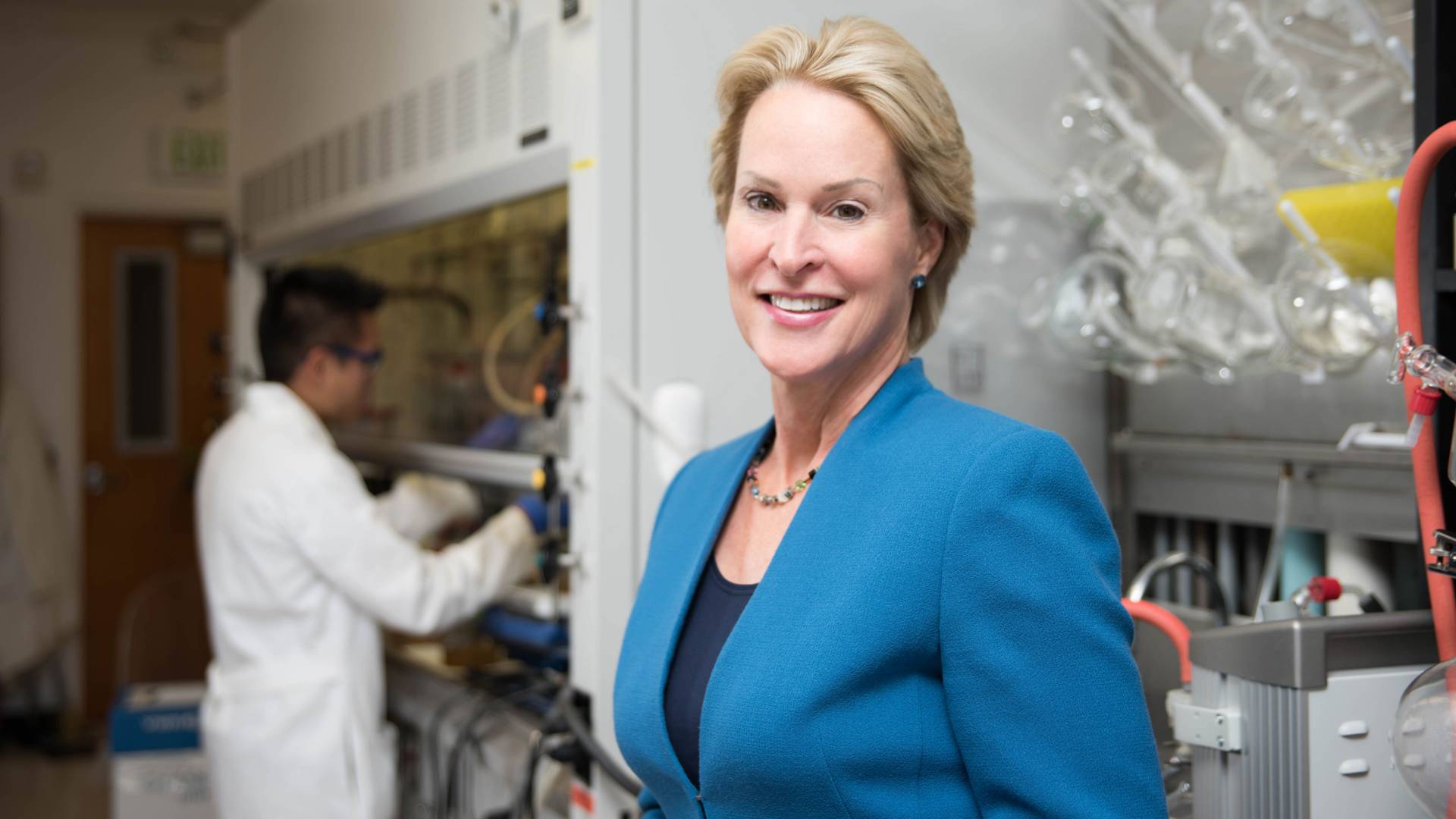 The 2018 Nobel Prize in Chemistry was awarded today to Princeton alumna Frances Arnold "for the directed evolution of enzymes." She received half of the award, while the other half was divided between George Smith of the University of Missouri-Columbia and Sir Gregory Winter of the MRC Laboratory of Molecular Biology at the University of Cambridge "for the phage display of peptides and antibodies."

Arnold is the Linus Pauling Professor of Chemical Engineering, Bioengineering and Biochemistry at the California Institute of Technology (Caltech). She graduated from Princeton University in 1979 with a B.S.E. in mechanical and aerospace engineering.

“Frances Arnold is a groundbreaking chemist whose research has had far-reaching impact on the development of chemical substances, from pharmaceuticals to biofuels. I am thrilled that she has won the 2018 Nobel Prize in Chemistry,” said Princeton President Christopher L. Eisgruber. “Professor Arnold’s scientific excellence and intellectual leadership exemplify values essential to our University, and all of us at Princeton are celebrating her receipt of this well-deserved honor.”

In announcing the award, the Royal Swedish Academy stated that the researchers had “harnessed the power of evolution.”

Describing Arnold’s contribution, the academy noted: “In 1993, she conducted the first directed evolution of enzymes, which are proteins that catalyse chemical reactions. Since then, she has refined the methods that are now routinely used to develop new catalysts. The uses of Frances Arnold’s enzymes include more environmentally friendly manufacturing of chemical substances, such as pharmaceuticals, and the production of renewable fuels for a greener transport sector.”

“What always amazes me about Frances is she’s such a powerhouse — she gets so much done,” said Michael Hecht, a professor of chemistry at Princeton and a longtime friend of Arnold. “Other people are doing protein evolution as well, but she just does more of it and gets to real results that are really cool and that have real uses in the real world. And that, in part, is because she is an engineer in how she thinks. She’s not just exploring protein engineering because it’s cool, or because she’s interested in the origin of life, but she’s exploring it because she’s trying to make something that’s useful to people.”

He added: “Knowing all that she’s done and knowing the life she’s lived, I’m convinced that while you and I have 24 hours in a day, she probably has 30 or more. I don’t know how else she can do what she does. She’s very creative, very bright — she’s amazing.”

“She is a terrific person, obviously,” said Earl Dowell, who was one of Arnold’s advisers at Princeton and is now the William Holland Hall Professor of Mechanical Engineering at Duke University. “Much of her work was in what I would think of as biology, so even though her degrees are in engineering she’s obviously used that to catapult into other interesting domains.”

Arnold is the first Princeton alumna (female graduate of either the undergraduate program or the Graduate School) to win a Nobel Prize. She is the third woman associated with the University to win a Nobel Prize — the second is Donna Strickland, one of the recipients of the 2018 Nobel Prize in Physics announced Tuesday, Oct. 2, who was an academic professional at Princeton’s Advanced Technology Center for Photonics and Optoelectronic Materials from 1992 to 1996. The first was Toni Morrison, Princeton’s Robert F. Goheen Professor in the Humanities, Emerita, who won the 1993 Nobel Prize in Literature. Arnold is also the first Princeton undergraduate alum, male or female, to win in the natural sciences: chemistry, physics, and physiology or medicine. Fifteen graduate alumni have won Nobel Prizes, most recently Kip Thorne, who completed his Ph.D. in 1965 and won the 2017 Nobel Prize in Physics.

Arnold focused on solar energy research while she was an undergraduate at Princeton, and shifted to biochemistry in graduate school. Many scientists were working on engineering proteins (molecular machines) through their genetic code, but Arnold decided to try a different approach: using evolution.

“No human can design a good enzyme, yet we are surrounded by them after 3.5 billion years of work by evolution,” she told Chemistry World in April. “I decided that I wanted to become an engineer of the biological world, specifically a protein engineer.”

Her approach, “directed evolution,” mimics the same evolution that turned dinosaurs into birds, but it works much more quickly. Instead of waiting for random mutations to creep into genetic code over thousands of generations, Arnold works with bacteria — which produces a new generation in about 20 minutes — and chooses which traits to breed together.

“She has truly made a big difference by finding out how to apply directed evolution to microorganisms,” said Athanassios Panagiotopoulos, the Susan Dod Brown Professor of Chemical and Biological Engineering at Princeton and chair of the department. “That principle has been picked up by many people in chemical engineering and molecular biology. It is a routine tool, now, used in genetic engineering, and she was the first to think of it.”

Her willingness to try a radically different approach was key to her success, said Todd Hyster, an assistant professor of chemistry who did his postdoctoral research in Arnold’s lab at Caltech. “The idea of testing a large number of proteins with random mutations introduced throughout the sequence, selecting the best one and repeating the process, was a formula used in nature, but it had not been applied as a means for protein engineering,” Hyster said. “This approach was anathema to how things were approached at the time. I think Frances was certainly met with a degree of resistance at the time. It is a testament to her to her vision, conviction and perseverance that she was able to ignore these criticisms.”

Arnold told the Princeton Alumni Weekly in 2014 that her methodology had initially been viewed skeptically by “gentleman scientists,” but she told herself, “I’m not a gentleman and I’m not a scientist” — she still identifies as an engineer — “so I didn’t mind.”

"She's stubborn," said her brother Eddy Arnold, a Board of Governors Professor and Distinguished Professor at the Center for Advanced Biotechnology and Medicine at Rutgers University. "If something's important to her, she works very, very hard to solve whatever problem presents itself. When she puts her mind to something, she can accomplish things that are out of this world."

The proteins Arnold now produces in her lab can speed up reactions that don’t exist in nature, leading to more environmentally friendly manufacturing of chemical substances — including medicines — and renewable fuels for a greener transport sector.

Arnold, in addition to having won countless other honors, is one of few people with membership in all three of America’s national academies: the National Academy of Sciences, the Institute of Medicine and the National Academy of Engineering. She was also invited to give the Wilhelm Lecture at Princeton in 2008 and is scheduled to give a seminar at the Princeton ACS Fall Organic Chemistry Symposium on Oct. 26.

“I get called lots of things — a biochemist, a molecular biologist, a chemical engineer — and I guess I am all of those,” she said in April. “I identify most as human!”