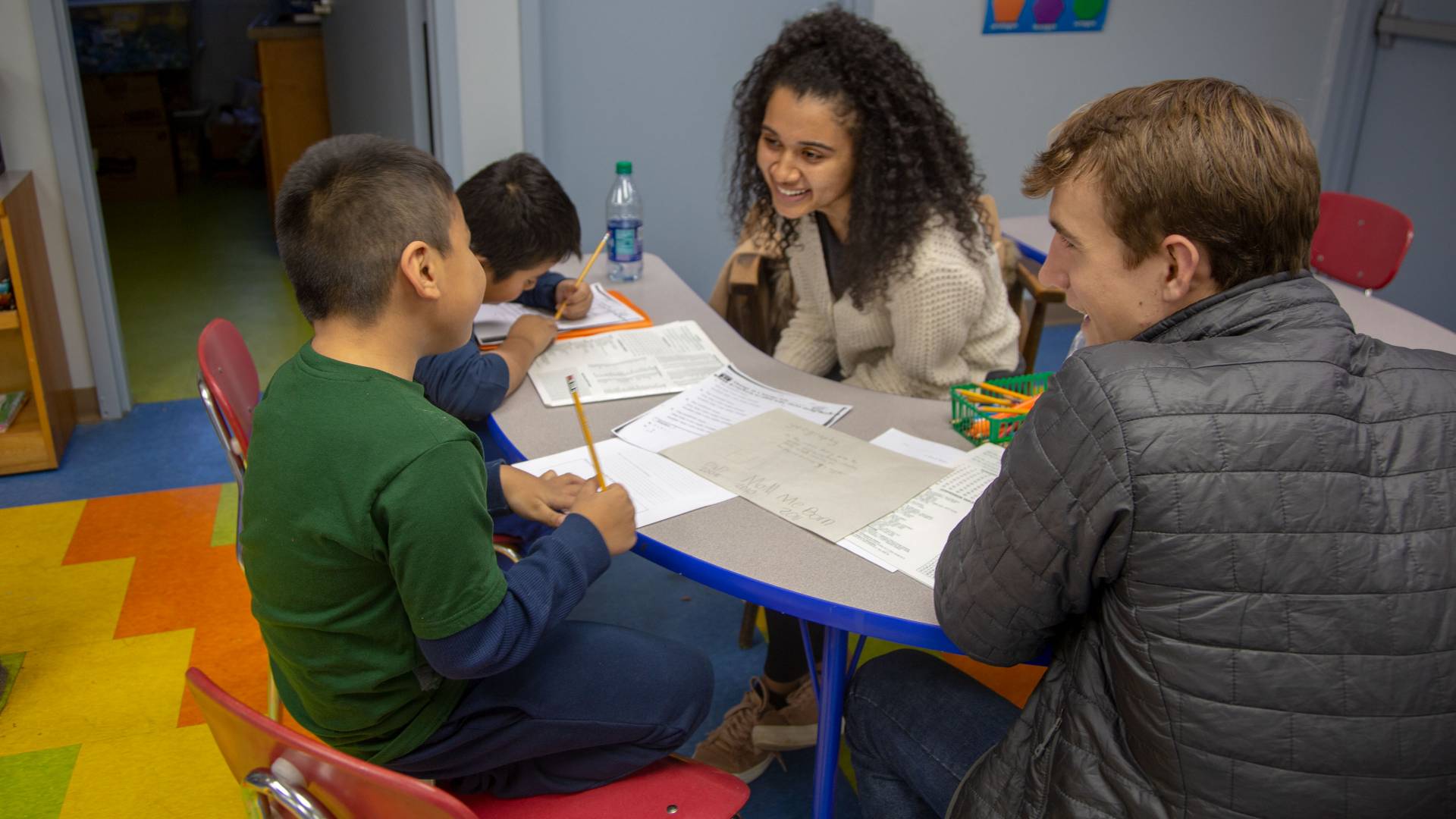 Priya Ganatra and David Bowman help students in the Princeton Family YMCA, Princeton Young Achievers program with homework. In the Department of Spanish and Portuguese’s ProCES (Program for Community-Engaged Scholarship) courses, Princeton students are using their Spanish to make a difference in communities, both in New Jersey and abroad.

Princeton’s Department of Spanish and Portuguese offers several ProCES (Program for Community-Engaged Scholarship) courses, including “Spanish in the Community,” “Medical Spanish” and “Spanish for a Medical Mission in Ecuador.” These courses connect service with academic work, giving students the opportunity to participate in community service as a part of their course.

“I realized coming into my junior spring that I hadn't been able to volunteer my time as much at Princeton as I had in high school, in large part because my classes were so much more demanding in terms of work and time,” said Theo Tamayo, a senior concentrating in history. “When I found ‘Spanish in the Community’ and learned that it incorporated volunteer hours into the course curriculum, I was extremely excited.” 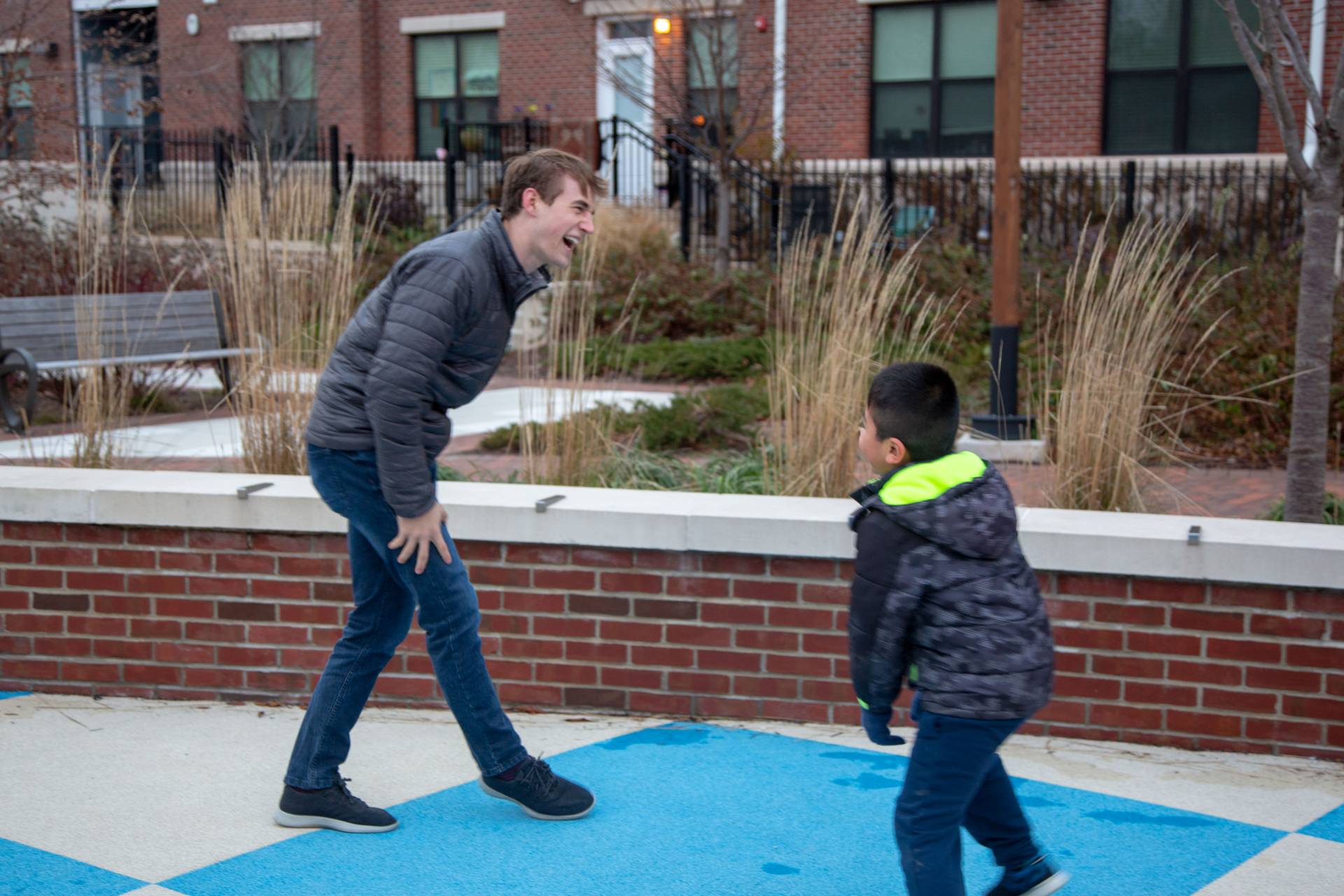 “I was drawn to [“Spanish in the Community’s”] emphasis on community engagement because I wanted to learn more about the Princeton community,” said Lydia Spencer, a sophomore and prospective Woodrow Wilson School major. “I think it is too easy for students to become focused only on the campus culture immediately surrounding them and to ignore the diverse community just a few blocks beyond Nassau Street.”

In “Spanish in the Community,” taught by Alberto Bruzos Moro, professor of Spanish and Portuguese, and graduate student Berta Del Río Alcalá, students explore the complexities of the Spanish language in America. Using a variety of readings, videos and documents in Spanish and English, the course addresses a range of issues, such as the past and present of Spanish language in the United States, the relationship between language and identity, and the tensions and hopes around the maintenance of Spanish in immigrant communities.

“I had always studied Spanish as a foreign language, despite the fact that there are tens of millions of Spanish-speakers living in the U.S.,” said Spencer. “Taking ‘Spanish in the Community’ has given me a greater sense of the many contributions Latino communities have made to American culture and politics, and has allowed me to develop a greater awareness of some of the challenges and injustices that Spanish-speakers have faced and currently face in this country.” 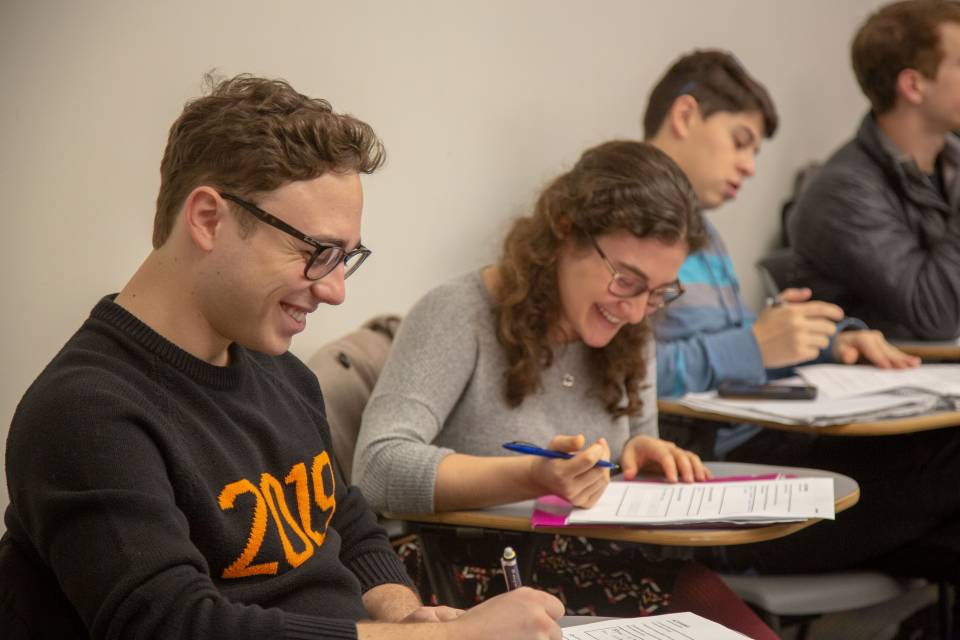 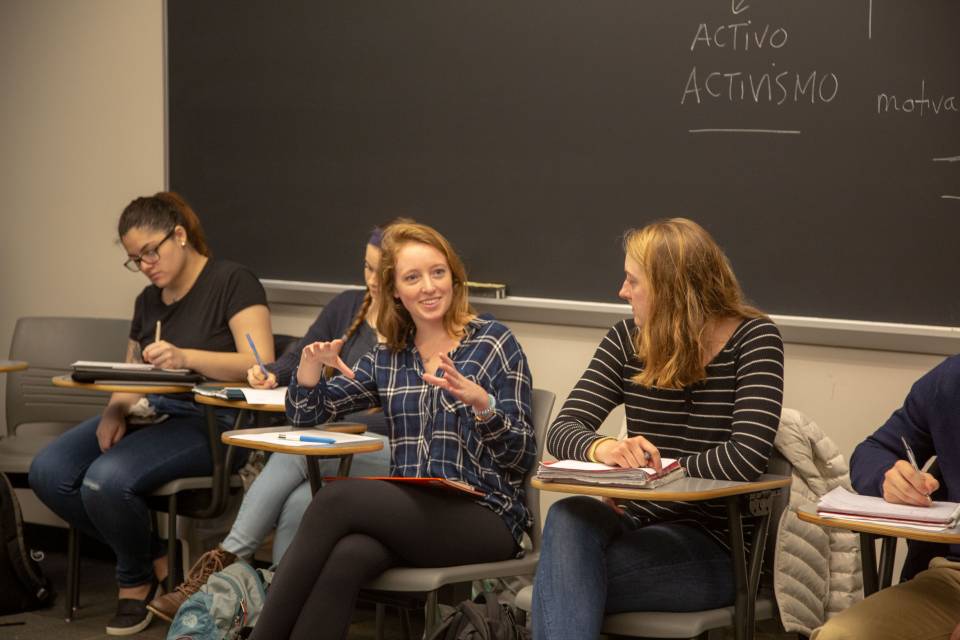 Nicholas Archer and Ariella Cohen collaborate on an in-class activity.

Lilly Chadwick participates in the class's discussion on Latino activism.

Professor Alberto Bruzos Moro lectures on Latino activism in "Spanish in the Community."

In addition to coursework, students participate in community placements, which often tie directly into what they discuss in the classroom. Elizabeth Love, a junior majoring in Spanish and Portuguese, said, “Learning about the experiences that many immigrants and their families face has given me a greater appreciation for the work that the organization I volunteer with does and has helped me become a more understanding volunteer at Princeton Nursery School (PNS).” 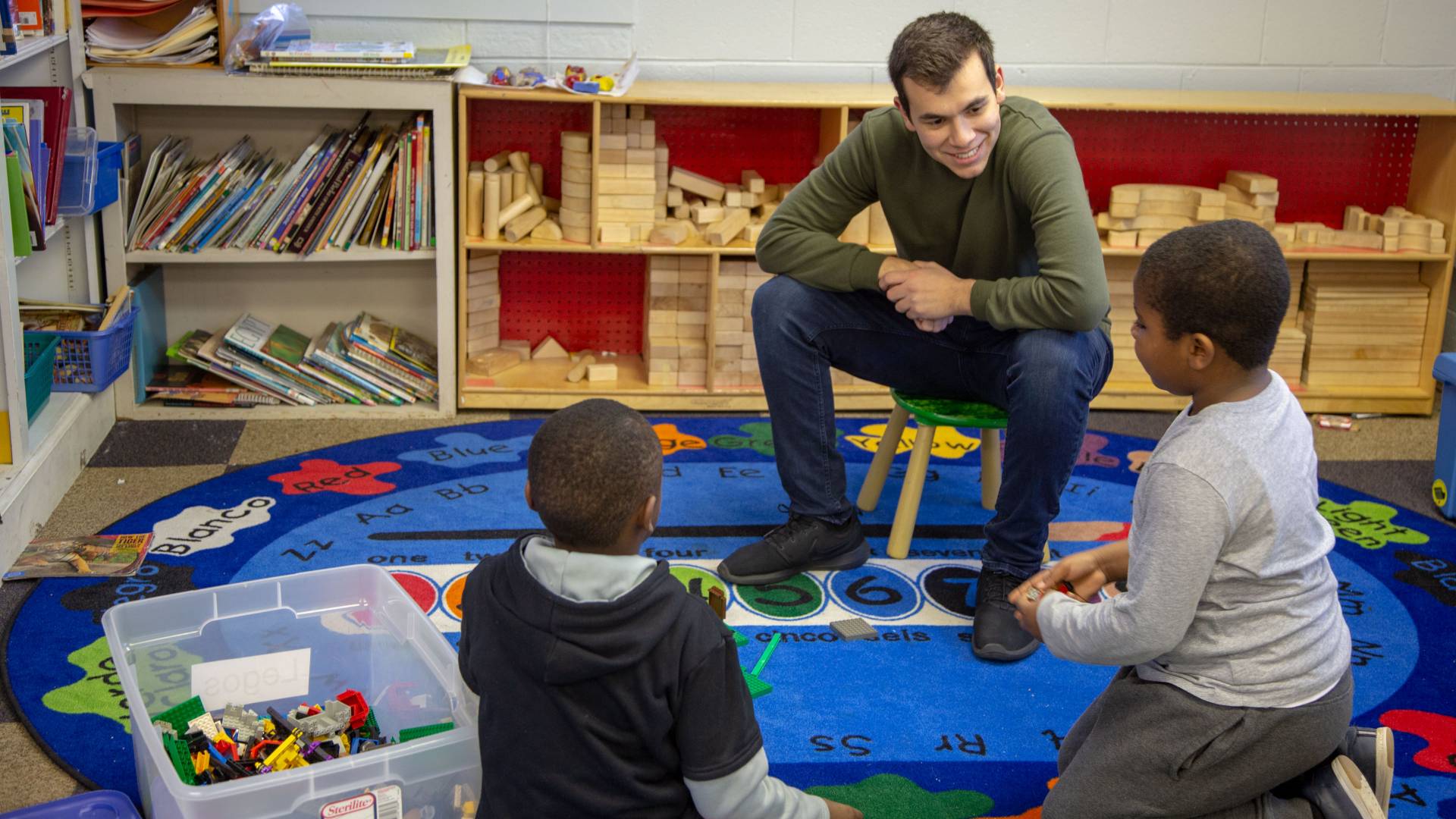 As a way of meaningfully reflecting on their experiences in the community, students maintain a service-learning journal, where they record their impressions of something that happened while volunteering.

Ariella Cohen, a senior neuroscience major who has participated in several ProCES courses, said: “Keeping a journal has been extremely beneficial for me and has encouraged me to think critically about the purpose of my community engagement and connect what I experience in the Princeton community with what we have read about and discussed in class.”

She added: “Every few weeks, [Bruzos Moro] prompts discussions in class about our community work, and it has been rewarding and interesting to both share my own experiences and hear from others.”

Paloma Moscardó-Vallés, a lecturer in Spanish and Portuguese, teaches two courses with community engagement components: “Medical Spanish” and “Spanish for a Medical Mission in Ecuador.”

In “Medical Spanish,” students study health topics germane to Hispanic communities in the Americas, with a focus on learning technical vocabulary useful for conducting medical conversations in Spanish. This semester, students visited an English as a Second Language course at the Latin American Legal Defense and Education Fund (LALDEF) in Trenton, New Jersey, where they presented in Spanish on how to read nutritional labels and the sugar content in popular beverages. 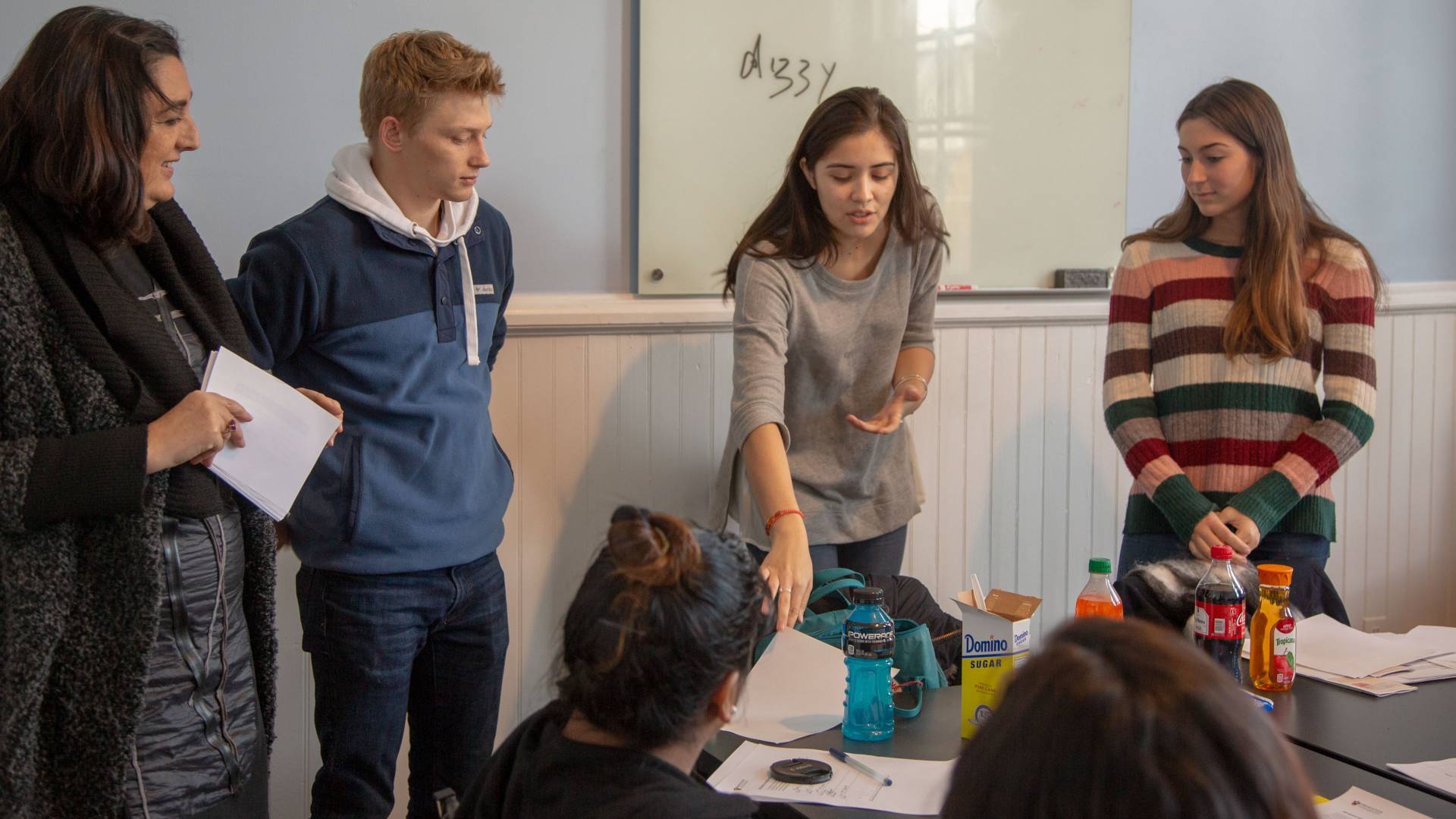 Last spring, Moscardó-Vallés taught a new course, “Spanish for a Medical Mission in Ecuador,” which she developed with the aim of giving service-minded students ample time to prepare for, participate in and reflect on a medical mission.

The course partnered with Conestoga Eye, a Lancaster, Pennsylvania-based ophthalmology office that had an existing relationship with an Ecuadorian clinic and accompanied the group on their trip, which took place over spring break.

Before they departed, students studied technical and geographical material, including medical ethics, ophthalmology vocabulary, and Ecuadorian customs and culture.

While they were in Ecuador, students conducted vision tests, took measurements of children’s pupil sizes and operated machines that measure refractive error. In total, the team of 20 saw 1,142 children in five days, and gave out 210 pairs of eyeglasses.

Upon their return to the U.S., students debriefed on the data they collected and developed their own research projects inspired by something they did or saw during the trip.

Cohen said, “Taking this course not only confirmed my desire to be a doctor, but also inspired me to participate in more medical missions. I am eager to use the knowledge and skills I develop on my path to becoming a physician to take a more active role in future medical missions.”

Bruzos Moro and Moscardó-Vallés emphasized the importance of viewing community engagement through coursework as something that is mutually beneficial.

“Community-based learning is not charity, but citizenship,” said Bruzos Moro. “It is about learning the skills and acquiring the knowledge important for all of us in our collective struggle for a more just society.”

Enrollments in the Department of Spanish and Portuguese’s ProCES courses continue to rise.

“While learning about a community in class is itself a rewarding experience, directly interacting with the community is invaluable,” said Cohen.

“Spanish in the Community,” “Medical Spanish” and “Spanish for a Medical Mission in Ecuador” will be offered again in spring 2019.