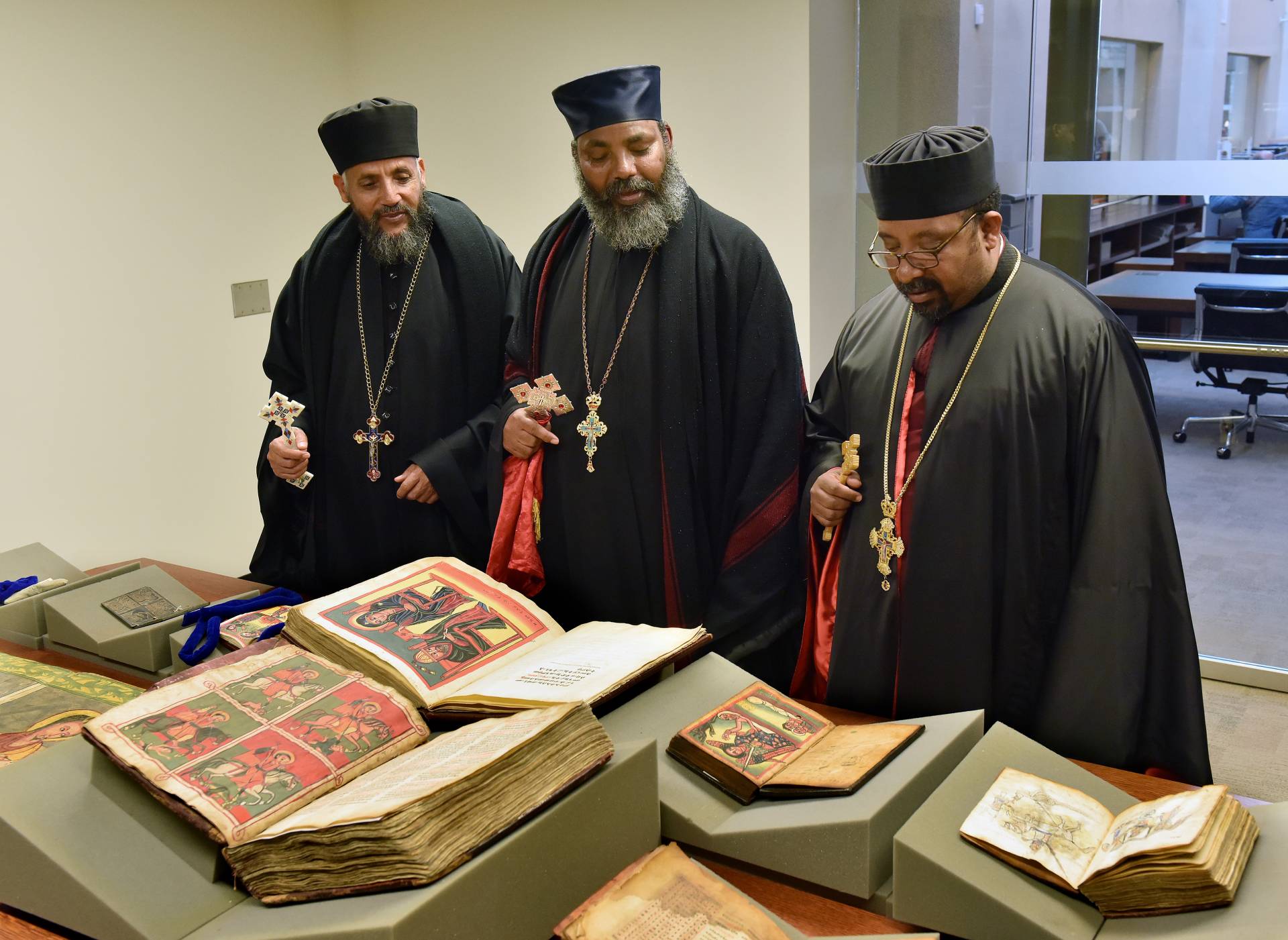 Ethiopian scholars and priests shared their knowledge of Ethiopia’s ancient tradition of written literature and bound manuscripts with a large audience at Princeton on March 12. 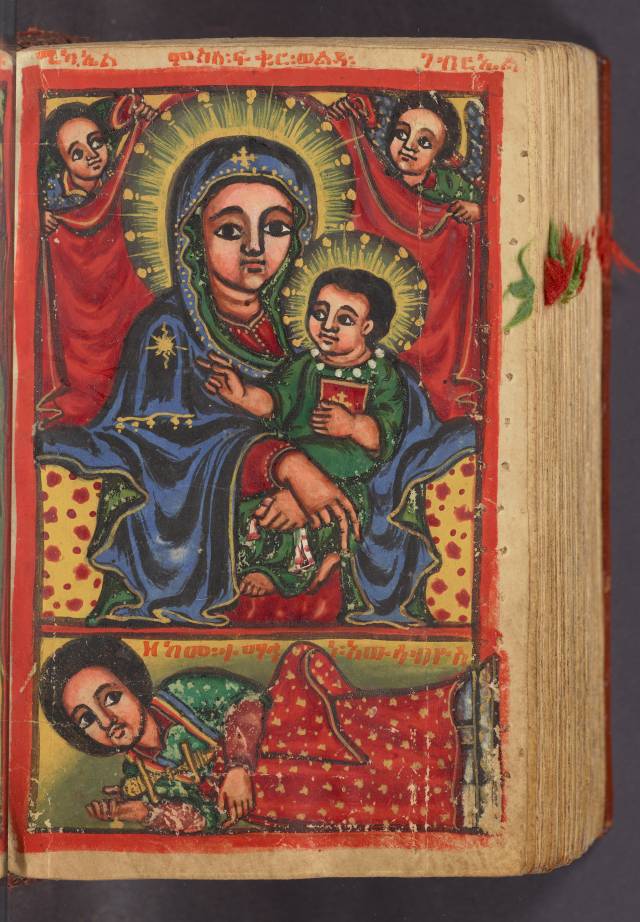 At the event, about 20 items from the collections were on display. Pictured: The Virgin Mary holding the infant Christ; with the manuscript’s patron depicted prostrated in worship at their feet. From Princeton Ethiopic Manuscript No. 57: Miracles of Mary with Three Miracles of Saint George (1700s), f 4r.

They were on campus for an event titled “Remorseless Cannibals and Loving Scribes: Samples and Highlights from Princeton University’s Collections of Ethiopian Manuscripts (1500s-1900s),” held in Princeton University Library’s Rare Books and Special Collections. The program drew a diverse audience of students — including students from Ethiopia — Princeton faculty from across the humanities and social sciences, and scholars from up and down the East Coast as well as England and Germany.

“Princeton has the largest and most significant collection of Ethiopian manuscripts in the Americas,” said Wendy Laura Belcher, associate professor of comparative literature and African American studies, who specializes in medieval, early modern and modern African literature.

Belcher said she was excited about the opportunity for the greater Princeton community to meet and learn from these scholars, including Ethiopian priests from Virgin Mary Ethiopian Orthodox Täwaḥədo Church and St. Michael Ethiopian Orthodox Täwaḥədo Church, both in Los Angeles. “The priests have unique cultural and scholarly knowledge of these texts, based on decades of studying them closely,” Belcher said. “They honor us with their presence and are here to explain to the audience about what these manuscripts are.”

Belcher said there are three facts about Ethiopia that are critical to understanding the significance of these manuscripts; as many mistakenly assume that Christianity in Africa arrived with Europeans.

“First, the Highland Ethiopians converted to Christianity in the fourth century, before most of Europe had even heard of Christ,” Belcher said. “Second, they have been using an African written language for more than 2,000 years, despite the stereotype that Africa is a place without writing. Third, they have been making bound books since the sixth century. This form of Christianity is really ancient, and has nothing to do with Europe.”

About 20 items from the collections were on display, including biblical books in translation, such the Gospel of John, the apocryphal Enoch and a psalter; as well as indigenous Ethiopian texts, including many saints’ stories (especially those about the Virgin Mary); textual amulets (small scrolls that people carried for protection and good luck); and a rare divination text titled "The Cycle of Kings.”

The collection began with donations by Princeton alumnus Robert Garrett, a member of the Class of 1897 who sponsored an expedition to Abyssinia in 1905 and 1906. It has grown over the years to include hundreds of items, including many manuscripts donated by Bruce Willsie, a 1986 alumnus, who attended the event. Nearly 100 of the manuscripts have been digitized for use by students and scholars worldwide.

“Salam and good afternoon. Thank you for being a part of this celebration,” said Kassam-Remtulla, who told the audience he was born in Kenya and has family in the region and so was especially glad to participate. 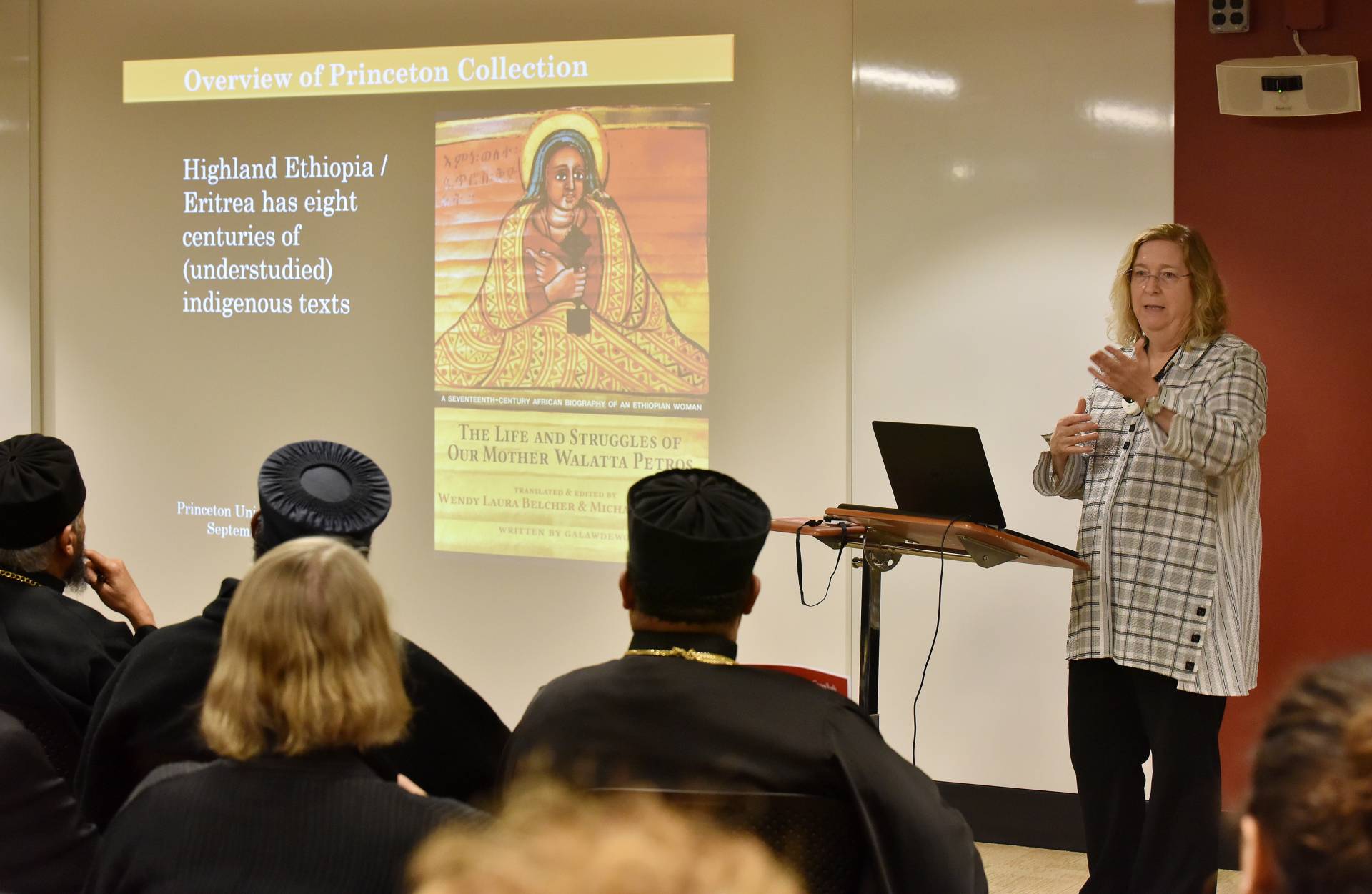 Wendy Laura Belcher, associate professor of comparative literature and African American studies, gives an overview of the collection — the largest and most significant collection of Ethiopian manuscripts in the Americas.

Belcher gave an overview of the collection, including a description of one of the most significant texts, “The Miracles of the Virgin Mary.” It includes about 700 folktales about miracles that the Virgin Mary has performed for the faithful. Some of these stories came from Europe but the majority arose in Ethiopia, Belcher said.

Meseret Oldjira, a graduate student in art and archaeology, spoke about the illuminations in the manuscripts. She noted that the texts created “new platforms for Ethiopian artistic expression,” adding that the intricate colors and techniques offer “a glimpse of the originality of Ethiopian artists.”

One of the priests from Los Angeles, and a cataloguer of Princeton’s collection, Qäsis Melaku Terefe, explained the liturgical context of “The Miracles of the Virgin Mary.” He described how readings from this text are used today during daily morning prayer. He then sang aloud one of the songs from the service.

As a member of the clergy, Melaku Terefe said he sees “the historical and psychological interpretation [of these texts] … as an opportunity to further church unity and dialogue previously divided.” 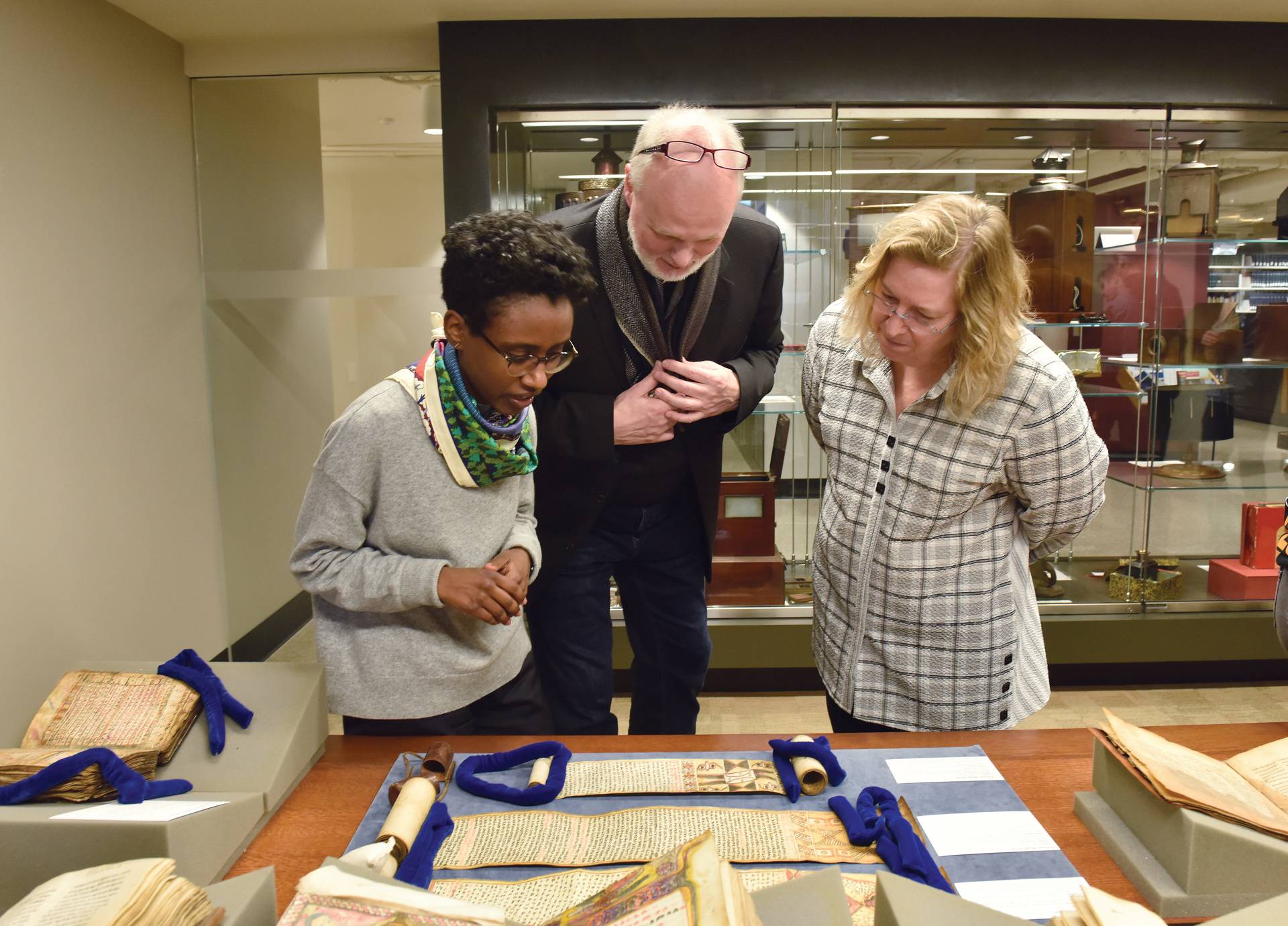 Meseret Oldjira (left), a graduate student in art and archaeology; Michael Kleiner (center), a scholar and translator at the University of Göttingen; and Belcher look at some of the textual amulets on display.

Michael Kleiner, a scholar and translator of African and Arabic texts at the University of Göttingen, discussed the challenges of translating “The Miracles of the Virgin Mary.” He recounted one of the tales, about a rich Middle Eastern nobleman — the “remorseless cannibal” in the title of the event — who ate only human flesh and devoured 78 souls, including his family, friends and servants, but was saved from hell by Mary due to a drop of water he once charitably gave to a thirsty beggar. Kleiner said: “You should never assume these pious tales can be translated ‘with one eye closed.’ Their simplicity can be deceptive at times — you can miss hidden intricacies of their language and rhetoric.”

Kleiner is a Visiting Stewart Fellow in the Department of Comparative Literature under the auspices of the Humanities Council at Princeton this semester. He and Belcher are translating “Kəbrä Nägäśt [The Glory of the Kings],” a retelling of the story of King Solomon and the Queen of Sheba, often called Ethiopia’s national saga.

“Collecting is a great joy, as is being a lifelong learner,” Willsie said. “But the greatest joy is giving those manuscripts to an institution where they will be preserved and made available to scholars and to the people whose heritage they are a part of.” 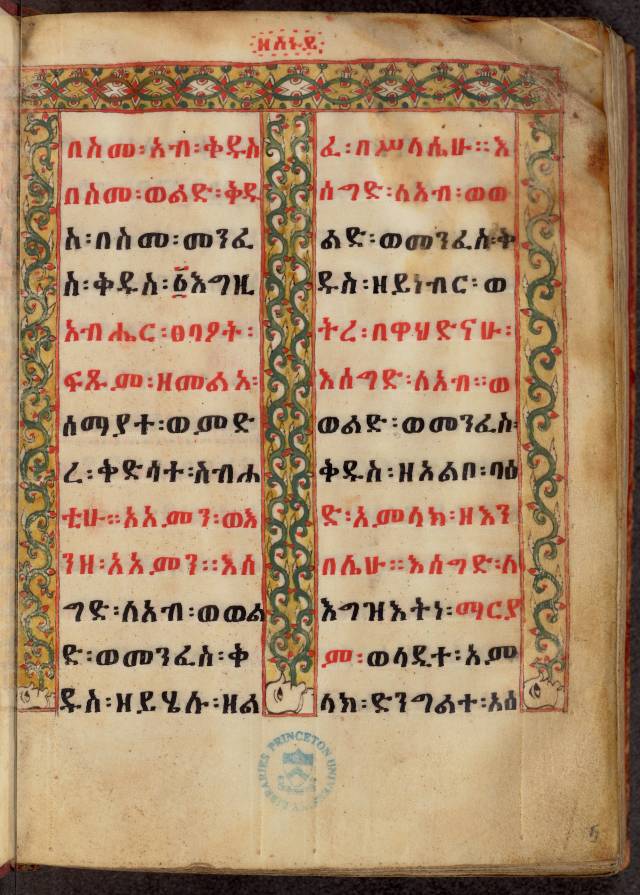 First page of a homily on Christ’s life, reading for Mondays. From Garrett Ethiopic Manuscript No. 11: Homilies and Prayers to Jesus Christ (1700s), f. 5r.

Ephraim Isaac gave an overview of the process of cataloging the collection. A scholar and director of the Institute of Semitic Studies, an independent research institution based in Princeton, Isaac was a visiting professor at Princeton from 1980-85 and 1995-2001 and was among the first cataloguers of the University’s Ethiopian collection.

On March 13, the Ethiopian scholars and priests also met to discuss the Princeton Ethiopian Miracles of Mary Project, funded by the Center for Digital Humanities and the Humanities Council. Belcher is principal investigator of the project.