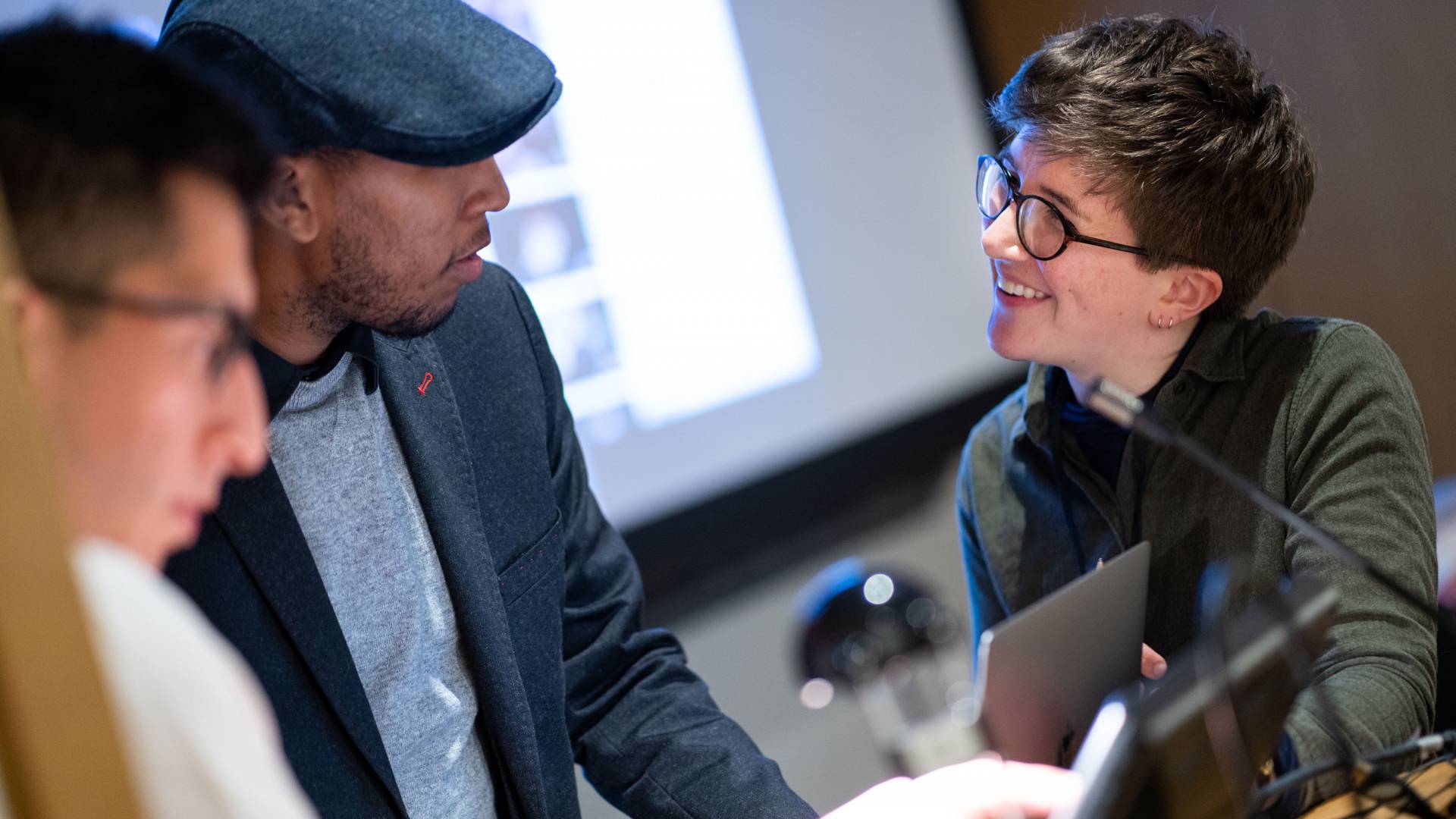 The "Indigenous/Settler" conference held April 4-6 at Princeton brought together Indigenous scholars and activists with Princeton students and faculty. Pictured: Graduate student Isabel Lockhart (right), a co-organizer of the conference, chats during a break with guest speaker Kyle Mays, Black/Saginaw Anishinaabe and a scholar of Afro-Indigenous Studies, Indigenous popular culture and urban history at UCLA.

“Indigenous/Settler,” a conference held April 4-6 at Princeton, brought together Indigenous scholars and activists with Princeton students and faculty to examine methods for thinking across geographies and building alliances.

The 19 guest speakers work in anthropology, creative writing, film, law, political science, education administration, philosophy and sustainability — an “academic rock star” lineup, said Candis Callison, a visiting research scholar in the Humanities Council and the Pathy Distinguished Visitor in Canadian Studies. “These scholars are and have been making major contributions to thinking about settler colonialism globally.”

Settler colonialism, Callison said, is a term describing dispossession of land and waters and disappearance of Indigenous peoples. 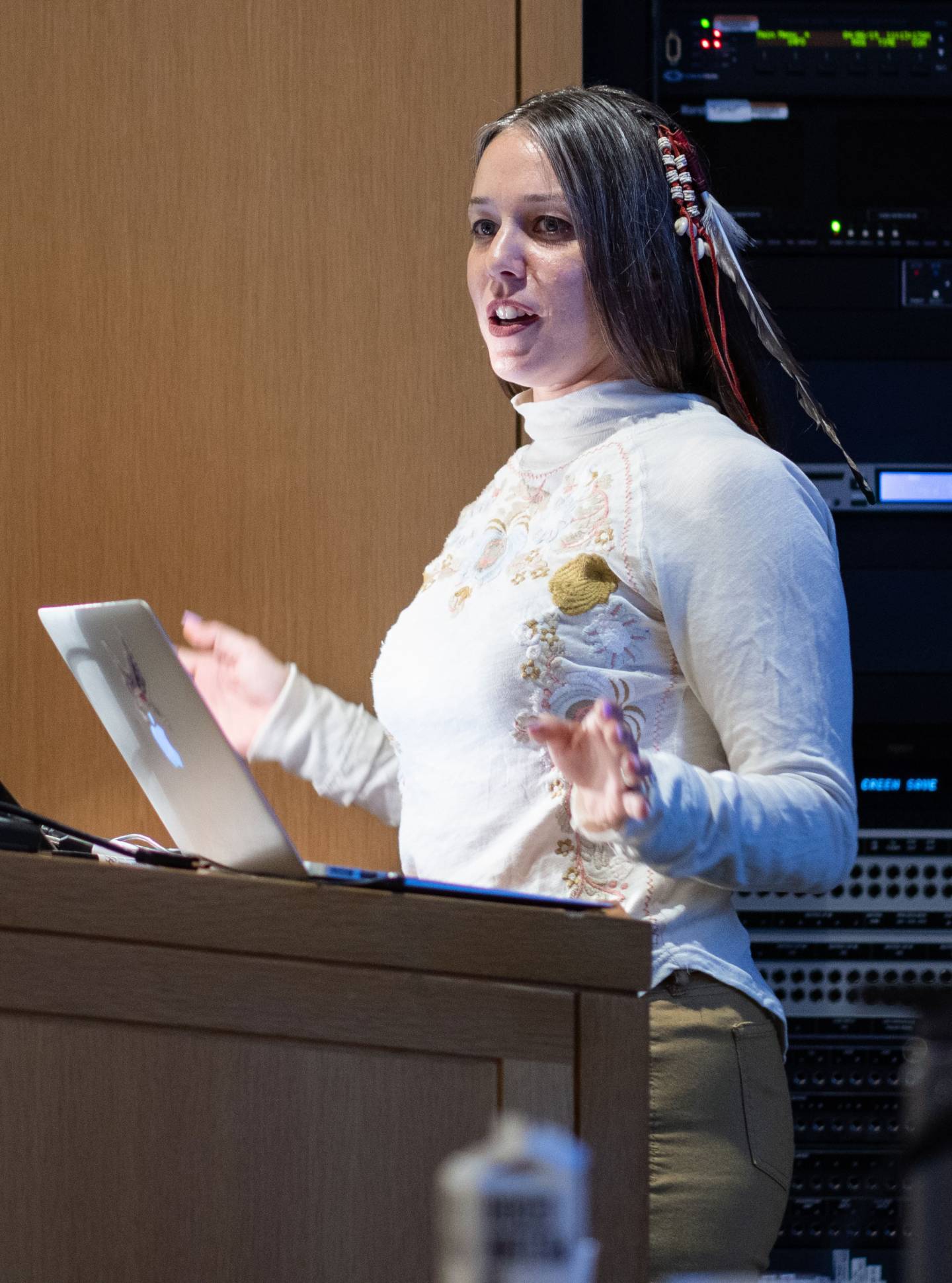 Topics included concepts of kinship and time, sovereignty, and effecting change within and without structures of nation-states.

The conference opened in East Pyne Building with a welcome in Munsee and English by Chief Dwaine Perry of the Ramapough-Lunaape. “Come now, stand forward,” Perry said. “The moment of the sacred places is upon us.”

In her opening remarks, Lockhart, a graduate student in the Department of English, thanked Perry for welcoming attendees to Lenape land. She said that the settlement date of 1683 on roadside welcome signs that attendees might have seen on their way into Princeton refers to the establishment of a tavern along a wagon road — now Route 206, Route 27 and Nassau Street in Princeton — connecting the then new city of Philadelphia with New York. The town of Princeton was “not just predicated on Lenape dispossession,” Lockhart said, “but also Lenape land knowledge: the wagon road was inspired by a well-traveled Lenape footpath.”

In the first keynote address, Audra Simpson, Kahnawake Mohawk and a professor of anthropology at Columbia University, spoke about “Savage States: Settler Governance in an Age of Sorrow.” She compared current U.S. and Canadian government actions toward Indigenous peoples. “In Canada, we appear; in the U.S., we disappear,” she said. In characterizing populations statistically, as minorities, she said, “we lose the conditions of their unbecoming, the centrality of war,” minimizing not only people but history. Numbers, Simpson said, “define people away from their own sense of significance. … The settler project is clearer, unambiguous in Canada.”

In “Territory,” a morning panel on April 5, Isabel Altamirano-Jiménez — Zapotec and an associate professor of political science at the University of Alberta — detailed the consequences of NAFTA on Mexican communities that share land with mining companies. “The legality of resource extraction creates legal dissonance,” she said. “NAFTA is protecting what’s underneath; the constitution protects the surface. Communities need to learn about national, international law, their own Indigenous laws.”

Altamirano-Jiménez said legal action isn’t enough to safeguard land and water from contamination by contemporary mining practices. “Other processes create the conditions for the legality of resource extraction.” 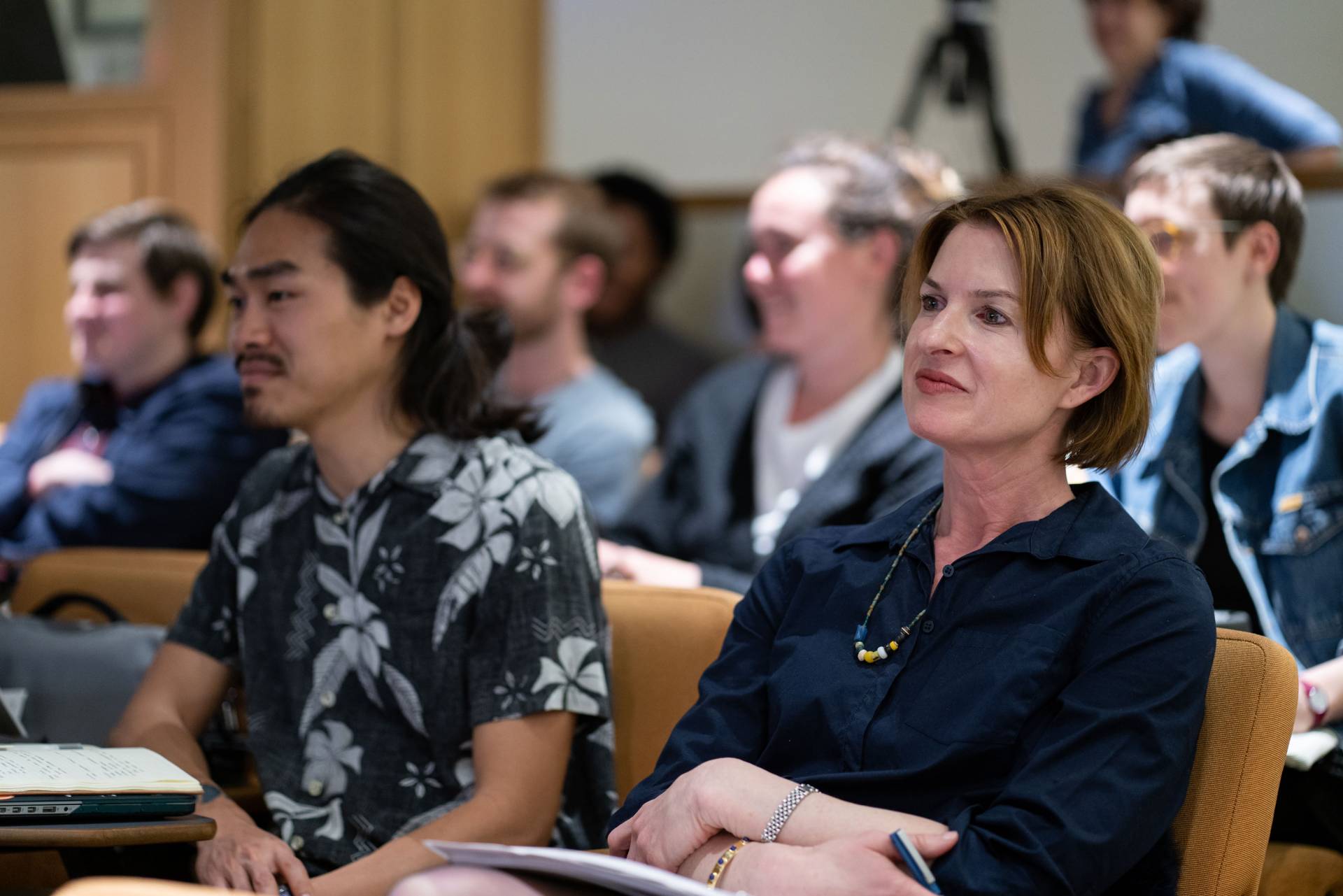 Sarah Rivett (right), a professor of English and American studies, listens during one of the presentations. Later, she delivered the conference's closing remarks.

Wendy Warren, an associate professor of history at Princeton, opened a panel titled “Global Indigeneities” by noting that in U.S. popular discourse, colonialism is often regarded as an issue of the past. She invited consideration of what committing to decolonizing means.

J. Kēhaulani Kauanui, Kanaka Maoli and a professor of American studies and affiliate faculty member in anthropology at Wesleyan University, said: “The structural condition of settler colonialism cannot be remedied by de-occupation. As Patrick Wolfe put it, 'settler colonialism is impervious to regime change.'”

Chadwick Allen, a professor of English and the Russell F. Stark University Professor at the University of Washington, commented on the emergence of Indigenous studies programs in higher education. He said that for two generations, universities “have seemed [to be] on the verge” of developing Indigenous studies, mostly centered on the U.S. and Canada, with occasional forays into Mexico, and expansive, inclusive definitions of the Pacific and its Indigenous communities. “Always,” he said, “we seem to be laying a groundwork for a next generation of scholars.”

Allen suggested that artists might be ahead of scholars. He led conference attendees through a visual close reading of Fred Graham’s 1996 installation “Song of the Pacific Ocean,” which Allen said suggested multiple Indigenous explorations within one sculptural work. The installation, thanks in part to Allen’s advocacy, will be featured prominently in the Burke Museum of Natural History and Culture’s new space, due to open in Seattle in fall 2019.

In the Princeton University Art Museum, Leanne Betasamosake Simpson read a selection of stories. Each story, in a distinct perspective and tone, told of harvesting sap. In one story, a group of Indigenous city-dwellers attempt to secure permission to harvest sap from city trees. Rachael DeLue, the Christopher Binyon Sarofim '86 Professor in American Art, said “the piece illuminated, with biting humor, the struggle to sustain Indigenous identity in a world largely blind to Indigenous peoples and their histories.”

Simpson screened “Biidaaban (The Dawn Comes),” a 2018 stop-motion animation film directed by Amanda Strong, inspired by Simpson’s poetry and stories. “Biidaaban” is a 2019 Academy of Canadian Cinema and Television nominee for best animated short. Through images that DeLue described as “hauntingly beautiful,” the film tells the story of Biidaaban, a young person who, in the company of a 10,000-year-old shapeshifting friend known as Sabe, sets out in their suburban Ontario neighborhood to revive the ceremonial harvesting of sap — an allegory, DeLue said, “not of belonging but of a fierce attempt to exist against the grain.” 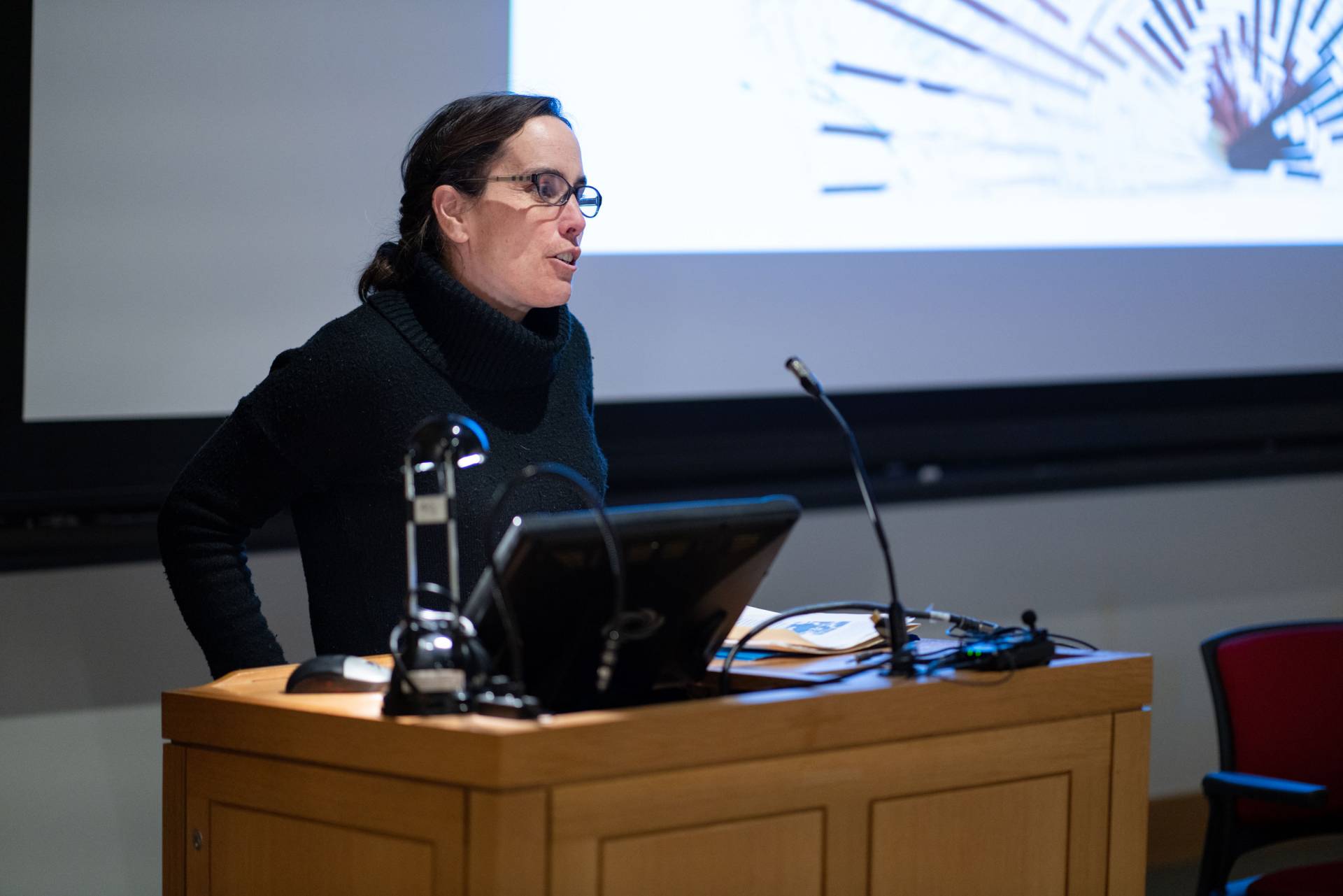 It was fitting, DeLue said, that Simpson read a few steps away from Titus Kaphar’s “To Be Sold” (2018), a recent museum acquisition that “puts front and center” Princeton’s historical ties to the institution of slavery. “The museum has made substantial efforts recently to revisit its history and the stories it tells as a cultural institution,” DeLue said.

DeLue and Professor of English and American Studies Sarah Rivett noted the hire of research scholar India Young to work on the museum’s Indigenous collections and hold seminars to teach faculty and students about the University’s holdings.

Rivett’s closing remarks reflected DeLue’s concerns. “What is the responsibility of institutions to retell the past in such a way that counteracts the violence of erasure and disavowal?”

Rivett noted that the First Convocation of American Indian Scholars, a four-day conference hosted by Princeton in 1970, propelled Indigenous studies as a scholarly discipline in many universities across the United States.

As a parting gift, Rivett and Lockhart presented guests with facsimiles of a birch bark book created by Ojibway chief James Solomon/Thunder Raven for his son in 1858 or 1859. The cover is handstitched with tinted porcupine quills. The father depicted animals, waterways and humans, some realistically, Rivett said, some as magical or abstract. Animals are named in Ojibway and represented in their natural habitat near the Shawanagwa Village.

The primary conference sponsor was the Humanities Council’s David A. Gardner ’69 Magic Project, with additional support from the University Center for Human Values, the Princeton Environmental Institute and the Princeton University Art Museum.