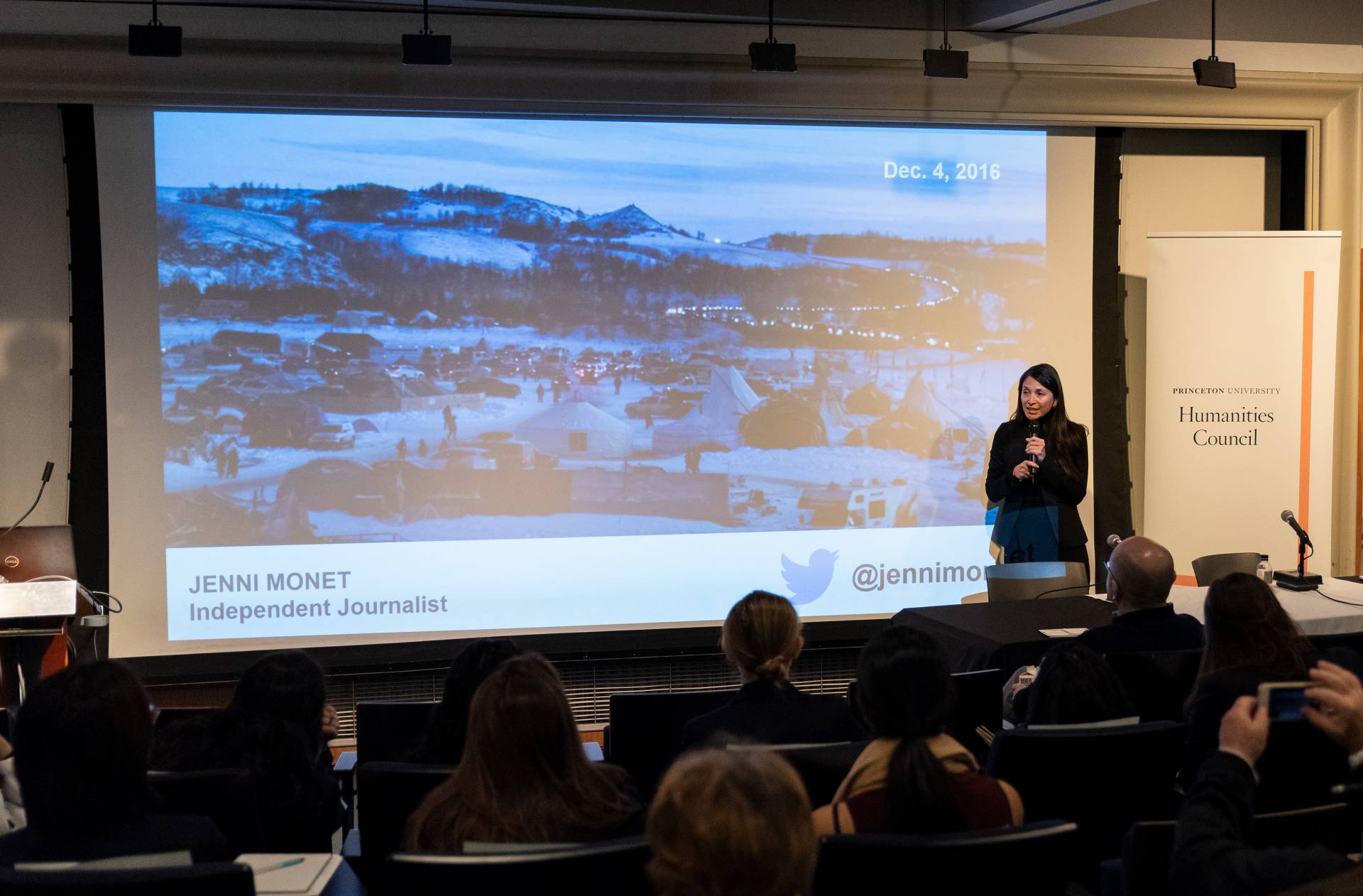 On Dec 6-7, scholars and journalists engaged in talks and discussion with more than 110 participants — and some 1,200 on Facebook livestream — at the International Symposium on Indigenous Communities and Climate Change held at Princeton. Shown here: Jenni Monet, an independent journalist and a tribal citizen of the Pueblo of Laguna in New Mexico, speaks about her experience covering the Dakota Access Pipeline project.

The International Symposium on Indigenous Communities and Climate Change, held Dec. 6 and 7 at the Princeton Public Library and Princeton University, brought together scholars and journalists to explore the impact of climate change on Indigenous communities throughout the Americas and Russia.

Simon Morrison, professor of music and Slavic languages and literatures, and director of the Fund for Canadian Studies, co-organized the symposium with Candis Callison, visiting research scholar in the Humanities Council and the Pathy Distinguished Visitor in Canadian Studies, who is at Princeton for the 2018-19 academic year. Morrison commended Callison’s “inspiring work on climate change from diverse Indigenous perspectives.”

Topics ranged from the emergence of Indigenous media and social movements to racism and intergenerational trauma experienced in Indigenous communities. The Humanities Council, the Program in Journalism and the Princeton Environmental Institute co-sponsored the conference.

It opened with an evening talk at the Princeton Public Library by journalist Tanya Talaga, who spoke about the deaths of seven Indigenous children in Thunder Bay, Ontario, the subject of her book “Seven Fallen Feathers: Racism, Death and the Hard Truths in a Northern City.”

On Dec. 7, more than 110 undergraduate students, graduate students, faculty, staff and community members gathered in Betts Auditorium on the Princeton campus for a day-long program. Some 1,200 people watched the Facebook livestream of the event.

Charlotte Driver, one of 15 seniors from the Stuart Country Day School of the Sacred Heart in Princeton attending the conference, began the morning session by reading a “land acknowledgment” that the students had crafted for the symposium. Land acknowledgments are commonly used to open public events to recognize the traditional native inhabitants of the land on which the event is taking place.

“The conference gathers on the land of the Lenni Lenape,” Driver said. “We honor the Lenape as the traditional Indigenous caretakers of these lands and waters, the elders who lived here before, the Indigenous today and the generations to come.” 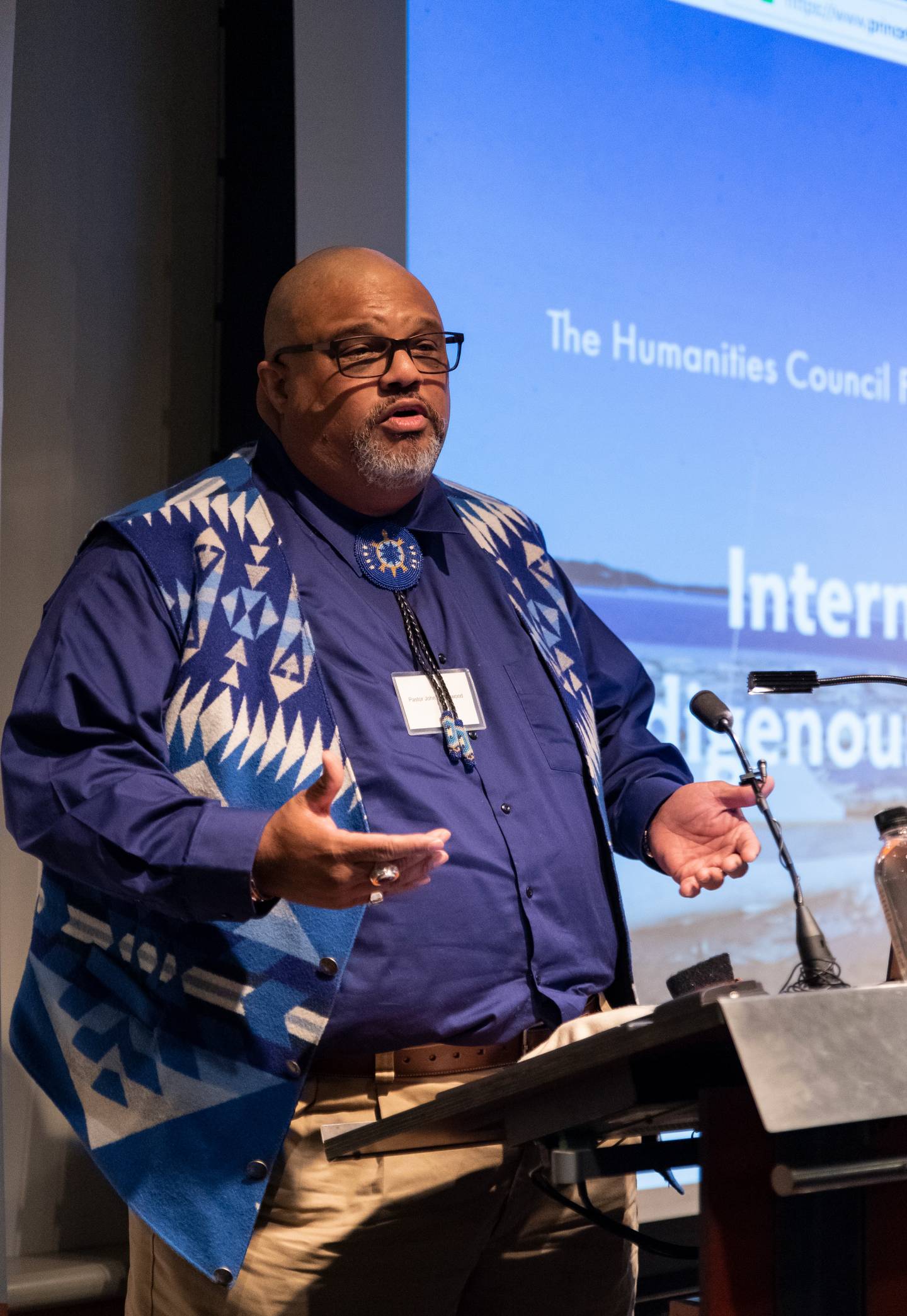 Pastor John Norwood of the Nanticoke Lenni-Lenape Tribal Nation, headquartered in Cumberland County, New Jersey, opens the event with a welcome and prayer.

The first talk, by organizer Callison, examined the role of Indigenous knowledge in media coverage of climate change. She greeted the audience with a bright “Good morning” in Tahltan, the language of her ancestors in northern British Columbia.

Noting that she saw coverage of opposition to the Dakota Access Pipeline project by the Standing Rock Sioux tribe on Facebook long before she read about it in mainstream media, Callison said social media now plays an integral role in communicating the concerns of Indigenous communities and the work of Indigenous journalists.

"What this offers in terms of understanding climate change is a relational view of how communities are adapting to and prioritizing environmental change even as they deal with chronic crises related to colonialism and the last several decades of rapid social change that affect all aspects of daily life,” she said. 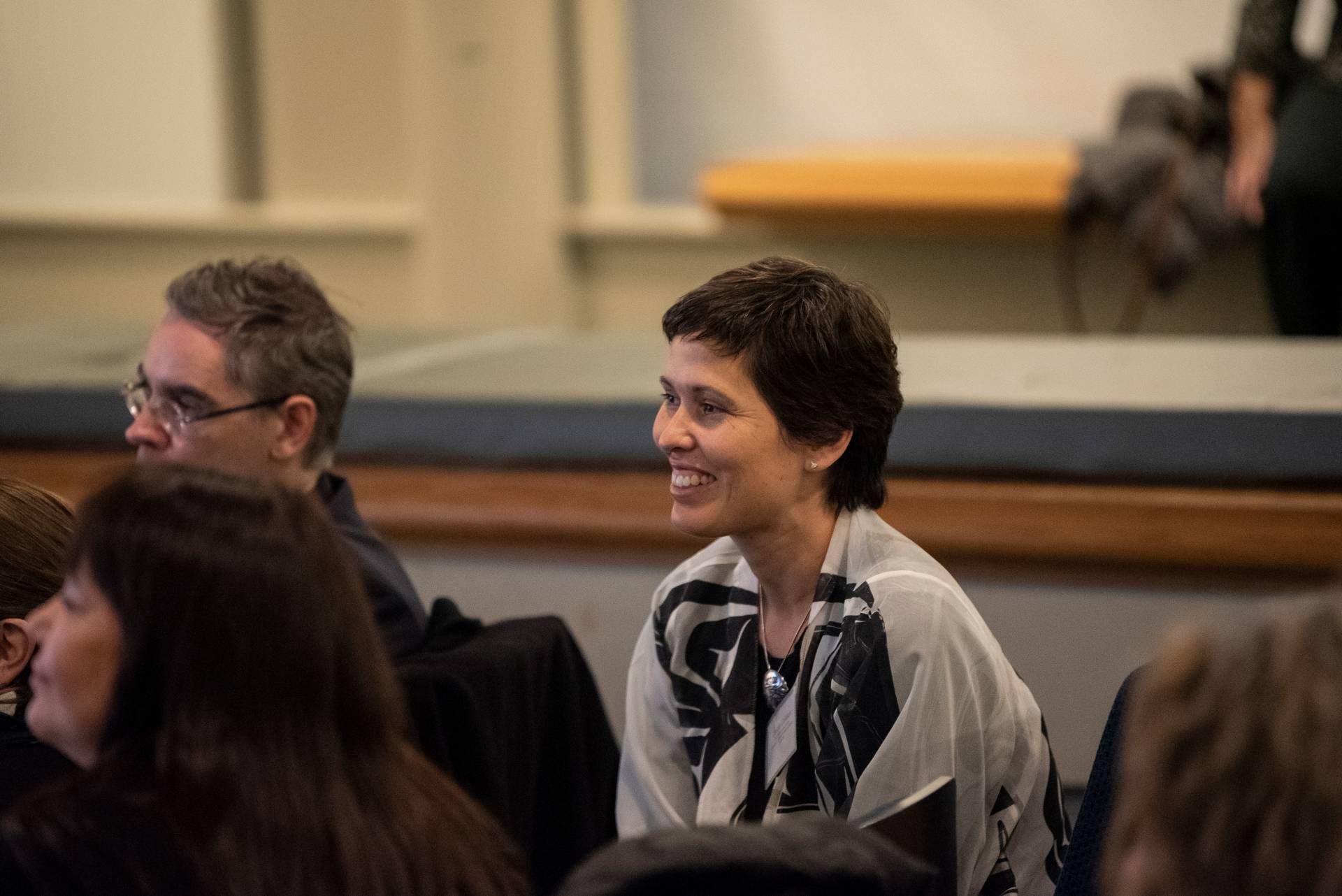 Candis Callison, visiting research scholar in the Humanities Council and the Pathy Distinguished Visitor in Canadian Studies, looks on during one of the presentations in Betts Auditorium. Earlier in the day, Callison, a former journalist, spoke on the role of Indigenous knowledge in media coverage of climate change.

In his talk, “Changing the Narrative About Climate Change,” Mark Trahant, editor of the online publication Indian Country Today, said: “I’d like to see this story: How much do we as a government, as a society, as humans, want to spend on mitigation or how much do we want to spend on adaptation? We must tell more stories about the side of adaptation and its cousin: optimism. … In the decades ahead, ‘this is what’s working’ is a story that has to be told more often.”

He focused on several of these “optimistic” case studies — including the case of Billy Frank Jr., whose decades-long activism paved the way for the Boldt decision of 1974, which reaffirmed tribal co-management of salmon resources in Washington state established by an 1854 treaty.

Like Callison, he said social media is critical to the Indigenous voice being heard in the climate change conversation. “We have 25,000 followers on Twitter. We would be nowhere without Twitter.” 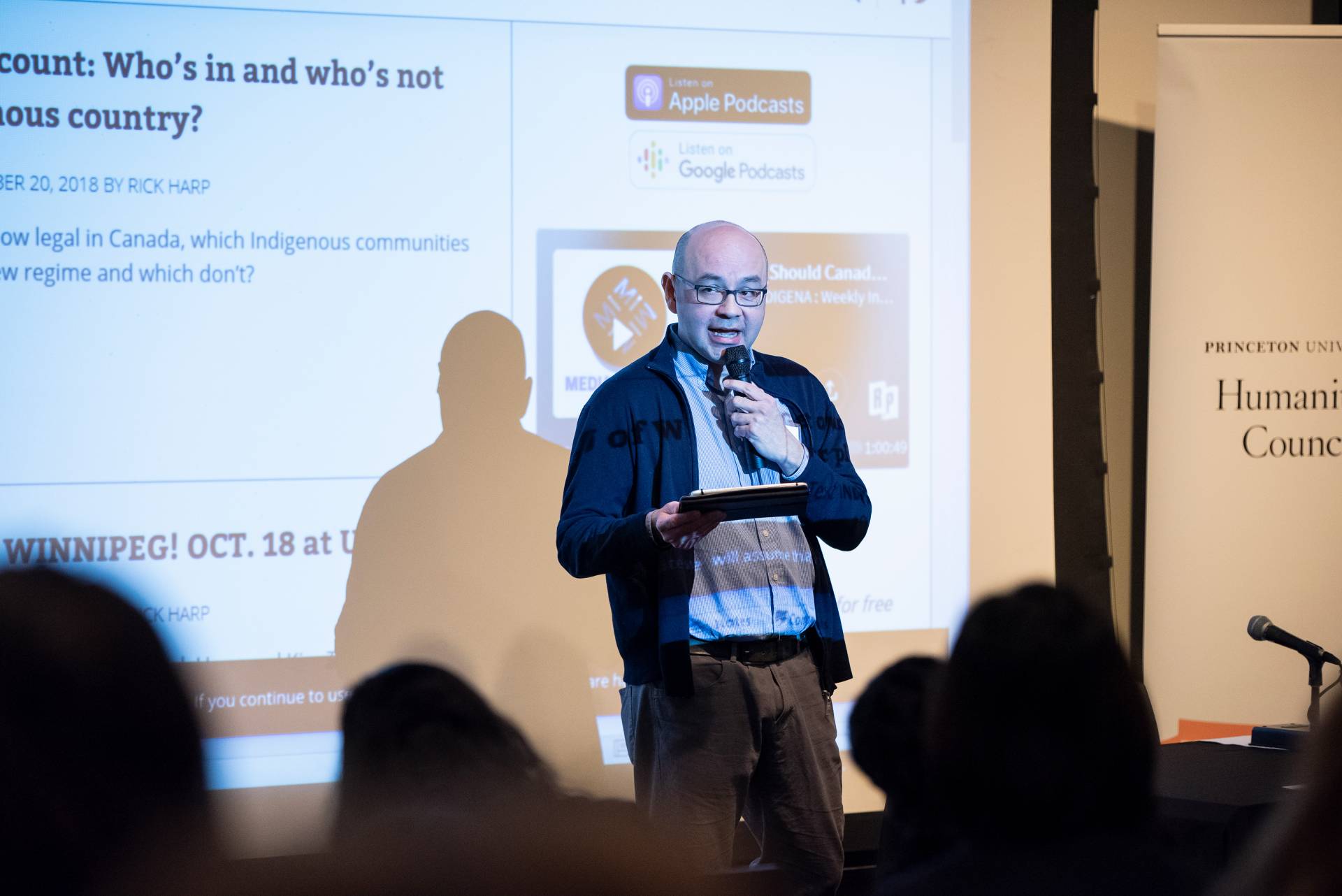 Jenni Monet, an independent journalist and a tribal citizen of the Pueblo of Laguna in New Mexico, spoke on “The Trump Energy Agenda in Indian Country.” Monet, who reported from Standing Rock for six consecutive months, presented a projected image of Standing Rock in twilight, showing a long line of the headlights of stopped cars winding around the landscape. “That photo is dated Dec. 2, 2016, the day the Army stopped construction of the pipeline so that alternate sites could be reviewed. [Secretary of the Interior Sally] Jewell said that we need to consider tribal viewpoints, that these treaties are not a relic, they are a really big deal. I was watching this unravel on CNN, MSNBC, Fox News, and it was surreal. A week after Trump gets into office, it gets reversed with an executive order which resumed construction almost immediately.”

She jumped ahead to recent media coverage of Andrew Wheeler, President Trump’s pick for Environmental Protection Agency administrator, who is rolling back climate change protections as acting EPA administrator. “How does this affect Indian country?” said Monet, who is also investigating the Trump administration’s oil agenda in Alaska. “I dig a little here, a little there, and start to see all these things that are connected; it’s alarming and chilling. This is why our Indigenous media spaces matter. … You’re just not seeing it in your news feed and that should alarm everybody. This is a planet we all share,” she said.

While Monet believes Facebook is “essential to movement and organization and communication in Indian country,” she warns about misinformation on social media.

“I love that this younger generation is so skeptical of what they’re reading,” said Monet, who teaches media literacy, “and I think that’s great and healthy in terms of demanding more accuracy on what you’re seeing on your news feed.”

Isabel Lockhart, a graduate student in English and organizer of the Princeton American Indian and Indigenous Studies Working Group, said she attended the conference because it related to her research interests in environmental humanities, indigeneity and settler colonialism. “It’s probably safe to say that this is the first time Indigenous knowledge has been centered like this at Princeton since the Convocation of American Indian scholars in 1970,” said Lockhart, who is organizing an “Indigenous/Settler” conference at Princeton, to be held April 4-6, 2019.

Lockhart was particularly moved by Hillary McGregor's bilingual story presentation in Anishinaabemowin and English and “his insights about the place of language in both environmental knowledge and the youth leadership initiatives he coordinates,” she said.

Morrison said he hopes the conference “helps to collapse — intellectually, practically — the divide between humankind and nature that has long exacerbated environmental degradation and abuse.” He also hopes that Princeton will consider establishing “a program of study in Indigenous culture, history, law and thought.”