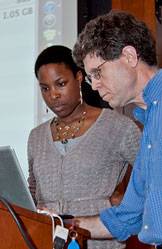 In the course "Communicating Climate Change," students learn about using multimedia to report on climate change and its potential consequences in a compelling and scientifically rigorous way. The course is co-taught by visiting lecturers Heidi Cullen and Michael Lemonick, shown here with Princeton sophomore Ogechi Oparah.

Instructors: Heidi Cullen, a visiting lecturer in geosciences and the Princeton Environmental Institute (PEI), and Michael Lemonick, a visiting lecturer in astrophysical sciences, freshman seminars and PEI. Cullen is interim CEO, director of communications, research scientist and correspondent for Climate Central, an independent, nonprofit journalism and research organization based in Princeton. The author of "The Weather of the Future," she holds a Ph.D. in climatology and ocean-atmosphere dynamics from the Lamont-Doherty Earth Observatory of Columbia University. Lemonick is senior science writer for Climate Central. He worked for Time magazine as a science journalist for nearly 21 years and has written for several other publications. The author of four books, he holds a master of science in journalism from Columbia.

Inspiration: The course teaches students how to use print, video and audio media to describe the climate change problem and its possible consequences to the public in ways that are simple and clear, as well as scientifically rigorous. The idea for the course was initially proposed to PEI in 2007 by Rebecca Nyquist '09, a religion major who earned a certificate in environmental studies. Lemonick and Shana Weber, manager of the University's Office of Sustainability, first taught this class, called "Communicating Sustainability: Critical Reporting on Environmental Issues," in spring 2008. 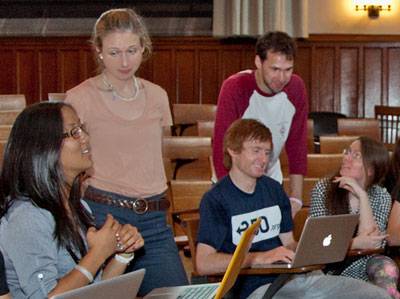 Cullen, standing at left, says a goal for the course is to help students "become more strategic communicators" while addressing the problem of climate change, a "profoundly important issue that has been poorly communicated in the mainstream media."

In this outgrowth of the original course, Cullen and Lemonick review how, even in light of the vast media attention given this subject, many people are still ill-informed and skeptical about climate change. The course explores why this persists, and how the causes, effects and possible solutions to climate change can be communicated more effectively. "Climate change is a profoundly important issue that has been poorly communicated in the mainstream media," Cullen said. "As a result, most Americans don't understand the causes of climate change -- which include burning fossil fuels and deforestation -- or the urgency with which we need to address the issue. This course gives students the opportunity to better understand climate science as well as study the psychology of communicating climate change. In the end, I teach this class in order to help students better understand the world they are inheriting and how they can communicate climate science with integrity and passion."

Description: The course covers the principles of communication, storytelling, how to handle technical terminology and how to report about climate change in a clear way. "Being able to communicate your point, no matter what the topic, is a profoundly important life skill," Cullen said. "So at its most basic level, this course helps students become more strategic communicators." During the semester, students learn the basics of science journalism and gain a range of skills, such as how to produce content across multimedia platforms, including infographics and podcasts. For their final project, students form three-person teams to produce and edit a climate science story using sophisticated video editing software used in most newsrooms. "My hope is that students finish this course with a sharper, more nuanced sense of how news is reported, as well as be able to tell their own great stories," Cullen said.

Lemonick said, "While teaching this course, we explain that the central challenge involved in communicating climate change is that it is a controversial topic. The effects of climate change are not immediate, so the public is not yet convinced because they don't feel climate change is happening. After a point people just have to pay the rent and take the kids to school; they are not going to change their behavior because of the polar bears. This lack of knowledge and understanding is true of audiences across the board."

Lemonick and Cullen emphasize the importance of the journalist's role: "Our job is not to inspire or to make people do something in particular in response to our reporting," Lemonick said. "We are here to help people understand what the science is telling us, how we might adapt, what we might do in response, but not what we have to do. For example, at Climate Central we don't tell our audiences to become vegan or adopt any other behavior. What we will say is: 'Here is the climate impact of a pig farm and a diet heavy in meat.' We provide objective facts for people to take and do with what they choose."

Lemonick and Cullen also share with students their research finding that emotional stories about people have a greater impact than scientific stories. Lemonick explained, "If we report 'the ice is shallower and this is bad,' it won't have an impact. To get people to understand the science we have to put it into the context of a person's life by reporting about someone, for example, a fisherman or an indigenous seal hunter, who is directly affected by the impact of the shallower ice."

The course includes presentations from a variety of guest speakers and emphasizes hands-on learning. The final project is creating a video that pulls together the skills explored in class, including conducting interviews, shooting and editing video, and creating graphics. According to Lemonick, seated at right, students are pursuing projects that look at topics such as growing urban "green walls" and what the University does with food waste.

Guest lecturers: The course also offers insights from guest lecturers. Visitors have included Robert Brulle, an environmental sociologist from Drexel University, who studies people's impressions of and attitudes about climate change. Justin Gillis of The New York Times spoke about green journalism. Katie Peek, a graphic artist from the magazine Popular Science, showed the students how to plan and create compelling graphics. The Climate Central podcast team taught students how to create podcasts, and Shari Bell, executive producer for Climate Central, spoke to the class about video production.

Hands-on learning: The students were required to create podcasts as a preliminary exercise in preparation for the final team projects: the creation of a video from start to finish. "The final project requires students to put together all they learned in class: science writing, creating informative and compelling graphics, conducting interviews, on-location shooting, editing at the Broadcast Center and more," Lemonick said. The final projects focus on a range of topics. "One team is going to the New Jersey shore at 4 a.m. to take photos of horseshoe crabs; one is going to Philadelphia to film a new urban phenomenon called 'green walls,' the practice of growing vegetation on the sides of walls which beautify, insulate and purify the air; another project is a report on the campus program that sells the University's food waste to a local pig farmer," he said.

Students say: Senior Jennifer Oswald, an ecology and evolutionary biology major who is earning a certificate in environmental studies, said she chose the course because she is interested in climate change issues and how the topic is "commonly misunderstood." Oswald, who plans to attend medical school, said she "was interested in the way this class promised to teach me how to communicate scientific concepts to the general public. As a physician or medical researcher, it will be important for me to convey complex medical concepts and dilemmas to patients." She said the class has illuminated the "challenge that science writers face in explaining facts but also building a story that people will want to read." If she decides not to practice medicine, she thinks she "would really enjoy learning about new science breakthroughs by researching and writing stories on them."

Sophomore Benjamin Barron, a comparative literature major, said he was drawn to the class to have the opportunity to discuss the question: "How can we use one of our most powerful tools, the media, to convey factual and relevant climate science in a way that people of all ideologies and political persuasions can understand?" In recommending the class, he said, "I strongly believe that the focal point where science and society meet is one of the most promising venues for significant progress in the struggle against climate change. I'm sure that what I've learned in 'Communicating for Climate Change' will carry over into my career."