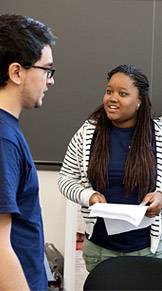 Fonzy Toro (left), a rising sophomore at Yale University, and Tashi Shuler-Drakes, a rising sophomore at Mount Holyoke College, confer during a Princeton University Summer Journalism Program workshop. Toro, from Los Angeles, and Shuler-Drakes, from Bridgeport, Conn., were members of the program in 2010 and returned to the Princeton campus in August to serve as counselors and mentors to high school seniors learning about journalism.

For 11 intense and enlightening days in August, a select group of high school seniors came to the Princeton campus to explore the craft of journalism and be introduced to the intellectual rigors of college life.

"It was a life-changing experience," said Delia Beristain of Crossland High School in Temple Hills, Md., one of 22 students who participated in the Princeton University Summer Journalism Program, which ran from Aug. 3 to 13.

The program, which four members of Princeton's Class of 2001 founded with a goal to diversify newsrooms, brings aspiring journalists from low-income backgrounds to the University. They learn about reporting, writing, broadcasting and blogging from alumni who work at newspapers, magazines, broadcast networks and online publications. 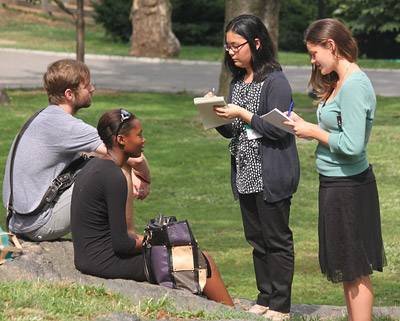 Angela Kim of Los Angeles (standing, left) and Michelaina Johnson of Ojai, Calif., high school seniors taking part in the Summer Journalism Program, interview people in New York's Central Park. The students gathered quotations for a story gauging Americans' knowledge of Sikhs and Sikhism in the aftermath of a mass shooting at a Sikh temple in Wisconsin. (Photo by Brian Rokus)

Beristain said one of her favorite sessions was a breaking news workshop taught by television producer Brian Rokus, Class of 1999. "He just seemed so passionate about it," she said. "I was really inspired."

Alejandro Izquierdo, from Chicago Academy High School in Illinois, hopes to enter college as a pre-med major and perhaps write on scientific and medical topics. "Journalism, I believe, is the voice of the people," he said. "We really learned a lot here, how to format certain stories depending on whether they're opinion, news."

Izquierdo said the instructors taught him how to loosen up his writing style — "Sometimes my writing was too formal" — and how to find the "hook" to lure readers into feature stories. 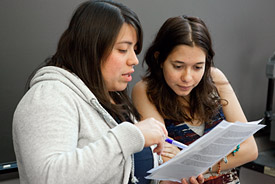 Lisette Bonilla (left) of Washington, D.C., and Liz Gonzalez of El Paso, Texas, discuss a text during a workshop during the Summer Journalism Program. Bonilla, who had taken part in the program in 2002, and Gonzalez, a rising sophomore at Bowdoin College who was in the program in 2010, served as counselors to the high school students in the program this year. (Photo by Denise Applewhite)

Besides attending journalism workshops on campus, the students also heard lectures from Princeton professors on a wide array of disciplines, such as Uwe Reinhardt on economics, Carolyn Rouse on anthropology and Stacey Sinclair on psychology.

And there were field trips. One night the group attended a Trenton Thunder minor league baseball game as part of a unit on sports journalism that included a talk by Dick Friedman, senior editor at Sports Illustrated. Another day, the group boarded a bus for New York and toured the offices of Newsweek and The Daily Beast, The New York Times and CNN.

The students also hit the streets to interview people affected by the move this spring of the University Medical Center to Plainsboro from its longtime location in Princeton. They reported their findings in The Princeton Summer Journal, a newspaper they produced from the reporting and writing they did during the program.

The "opportunity for hard-hitting journalism" is just one of the many reasons for the Summer Journalism Program, said Richard Just, one of the alumni founders. 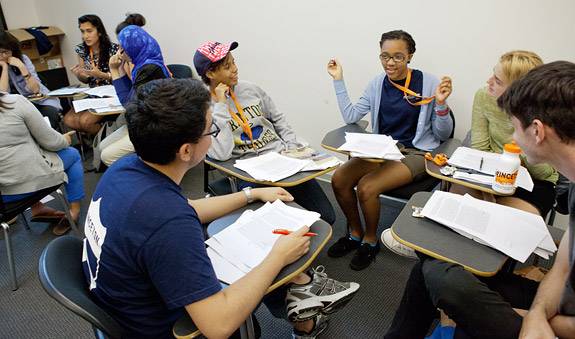 Sherese Morgan of Yonkers, N.Y., (center, gesturing) speaks to fellow members of the Summer Journalism Program during a workshop in which participants were learning how to write effective college application essays. (Photo by Denise Applewhite)

When the program started in 2002, it was a training ground for journalists. But it has evolved through the years, said Just, a consulting editor at Newsweek. "We think about the program as a place to train intellectuals," Just said, noting that the founders want the students to become "omnivorous about the world."

"The broader mission is to expose students to people and ideas they might not have otherwise bumped into," said Rich Tucker, another founder. "When the program started, it was just on the East Coast," he said, explaining that students were drawn only from high schools spanning from Boston to Washington, D.C.

Now, the program attracts students nationwide. Through donations, most from alumni, the program pays for participants' lodgings, meals and transportation. In partnership with the Pace Center for Civic Engagement and through the Princeton Internships in Civic Service, the program sponsors an intern each year who helps coordinate the rigorous schedule the students follow. It starts with breakfast and often finishes late at night with writing and editing exercises.

The students also attend workshops on applying to college, getting financial aid and preparing for the SAT.

"I'm so thankful for that," said Makenna May of the Coeur d'Alene Charter Academy in Idaho. She noted that the program also has many counselors — many of them graduates of the program — who are on hand to guide the students on making college choices as well as developing journalism skills. "They're really nice and welcoming," echoed Lorena Aviles of Warren Township High School north of Chicago. 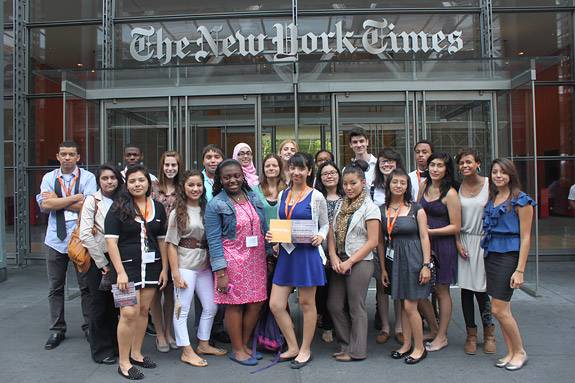 Members of the Summer Journalism Program pose for a photo at the entrance to The New York Times, one of several news organizations they visited during a visit to New York City. The students also visited CNN as well as Newsweek and The Daily Beast as part of the broad exposure they received on various forms of journalism. (Photo by Brian Rokus)

The students get a sense of the competitiveness of college admissions in getting into the Summer Journalism Program itself: They were chosen from among 225 applicants.

Just said that, in recent years, the majority of the program's graduates have gone on to Ivy League or equivalently competitive schools, and he mentioned proudly that they include Princeton students. After the session at Princeton is over, the directors and counselors work with the students throughout the fall, helping them with all aspects of the college admissions process.

Mariya Ilyas, a member of the program in 2008, is entering her senior year at Bowdoin College and was a counselor this summer. "I find that the skills I've gotten through journalism have helped me in other realms," she said. The program helped her learn to speak up and ask questions, and "not to take anything at face value."

Tasnim Shamma, a member of the Class of 2011, led a workshop on radio journalism. When she was a member of the program in 2006, she was expecting she'd be a print journalist. But she is finishing a fellowship with National Public Radio in Washington, D.C., and will soon join WFAE radio in Charlotte, N.C., as a reporter.

Tucker, Just and classmates Michael Koike and Gregory Mancini continue to direct the program. They have roots in Princeton journalism. Mancini was founding editor of The Prince Magazine, while Just, Koike and Tucker worked at The Daily Princetonian, respectively, as editor-in-chief, executive editor and managing editor.

"It's always fun to come back every year," Tucker, a federal prosecutor in Brooklyn, N.Y., said while flipping burgers for the students at an evening barbecue on the lawn outside the Friend Center. "It's a special connection to the University that not everybody gets to have."

At the conclusion of the program, the students returned home to start their final year in high school and contemplate their college choices. Beristain wants to study international relations, perhaps at the University of Maryland. She left Princeton grateful for what she learned and the people she met.

"I've never met people who were so nice," she said. "It came as a shock. It really helped me open up."

Darquis Williams (right) of Memphis, Tenn., makes a point during a workshop. Looking on are counselors Yared Portillo (left) of Santa Maria, Calif., and Mariya Ilyas of Alexandria, Va., who were students in the program in previous years. Williams was one of 22 high school seniors who took part in the 2012 program. (Photo by Denise Applewhite)