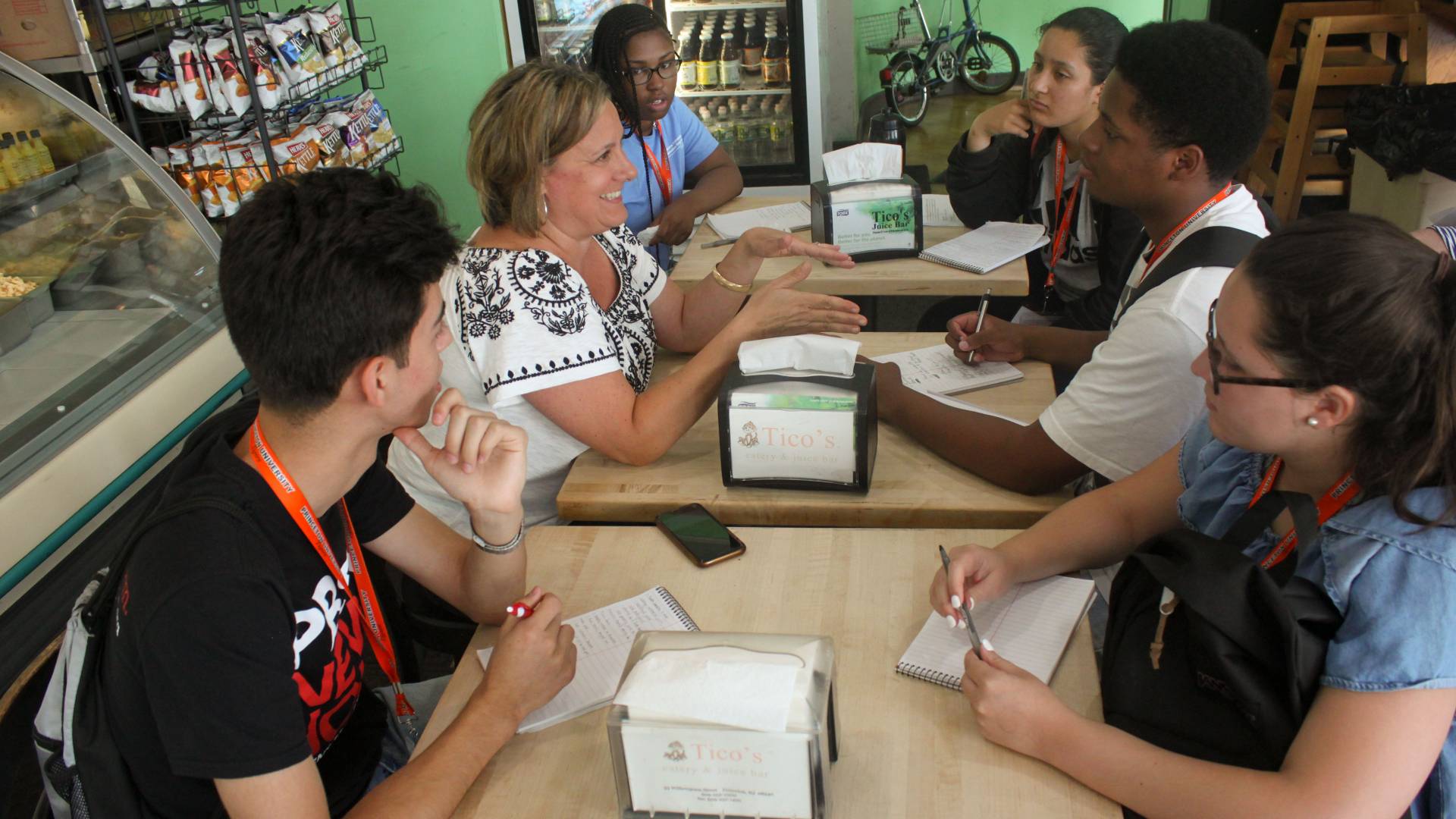 High school students attending Princeton University’s Summer Journalism Program (SJP) got to experience firsthand what it takes to be a news reporter. For a story about the açaí bowl craze, they interviewed Renee De Bernard, left center, co-founder of Tico’s Juice Bar on Witherspoon Street. They also stopped by the newly opened Frutta Bowls on Nassau Street to chat with owner Haydee Kapetanakis.

Students in Princeton University’s Summer Journalism Program (SJP) stepped into the role of news reporters for 11 days this August, preparing themselves for the rigors of a career in journalism, as well as an important first step — the college application process.

The intensive program, held Aug. 3-13, introduces high school students from underrepresented communities to the professional world of news reporting and connects them with writers, editors and producers who are active in the field. At the end of their stay, each participant is assigned a counselor who oversees their college application all the way through acceptance and the financial aid process with their chosen school.

Now in its 17th year, SJP welcomed 40 high school seniors from 17 states to Princeton this summer — its largest class.

Just, a 2001 Princeton alumnus and editor of The Washington Post Magazine, founded the program with three classmates — Gregory Mancini, Michael Koike and Rich Tucker — who worked with him as editors at The Daily Princetonian while undergraduates. The four were concerned about the lack of diversity both at “The Prince,” as the student newspaper is known on campus, and throughout the industry. 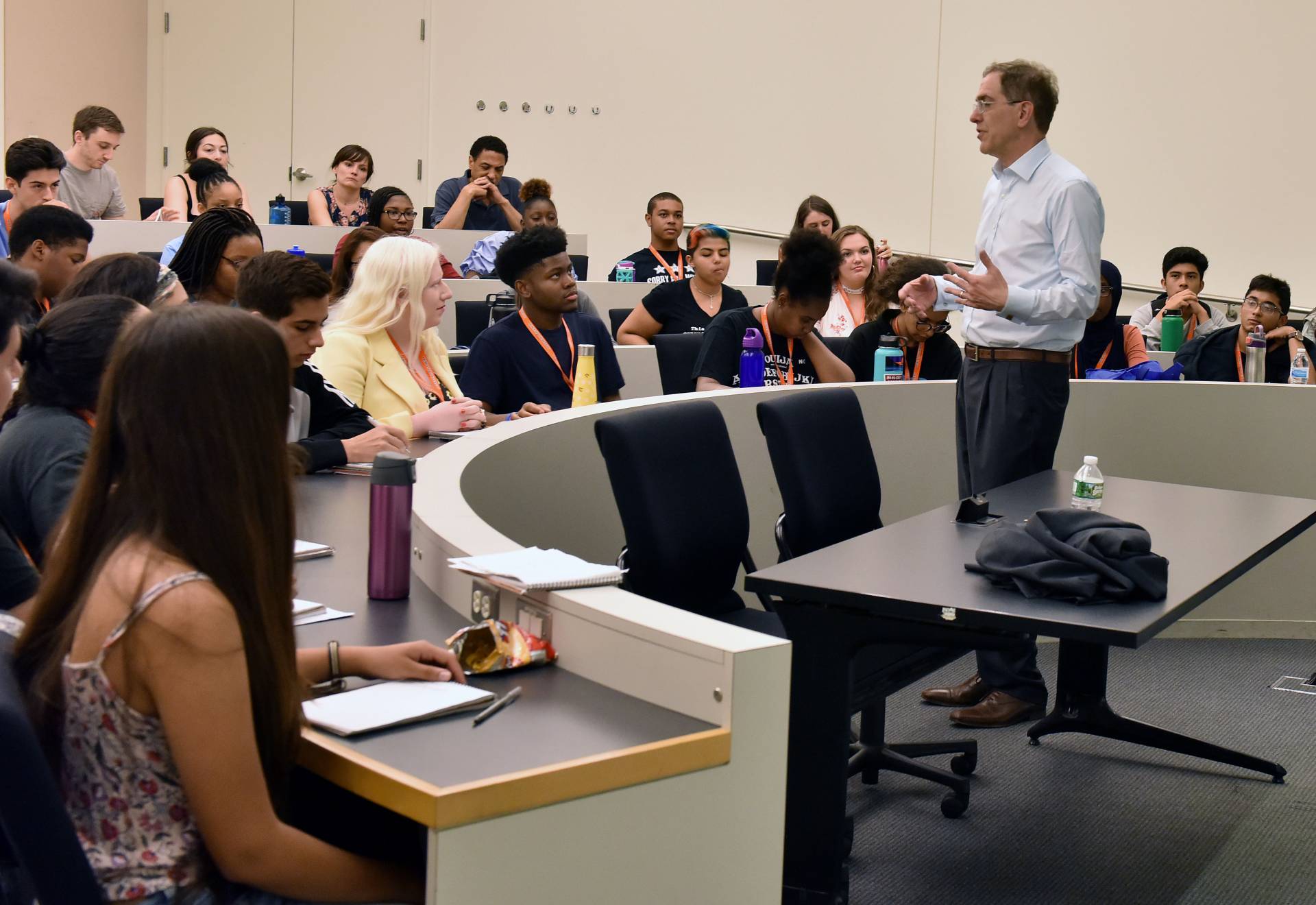 Princeton University President Christopher L. Eisgruber shared his thoughts about the value of a college education with SJP attendees, all of whom are at the top of their classes at their respective high schools, but might not have the necessary support to attend elite colleges. The second part of SJP begins when the students head home. Each is assigned a counselor who scrutinizes their college application and provides guidance throughout the process.

SJP participants receive intensive training in the classroom and out in the field, holding to a packed schedule from their early wake-up in the mornings to lights out.

Each day they attend mini courses with current journalists, who introduce them to a wide range of newsgathering techniques and different types of journalism, including food writing and sports reporting. The students then put their newly acquired skills into practice, conducting man-on-the-street interviews, interviewing politicians and profiling local businesses.

“Before this I had never met an actual journalist,” said Mauricio Vasquez of Dallas, who plans to major in journalism and screenwriting. “Talking to them about their first experiences and jobs was amazing. … You can have a million lessons about journalism but I don’t think anything compares with being able to interact with someone who is pursuing this career.”

Jayda Jones of Brownsville, Pennsylvania, said the experience of attending SJP was especially invaluable because her high school does not have a newspaper or journalism courses.

“We learned what feature writing is, opinion, investigative reporting,” she said. “I’ve become a better writer and learned to produce quality writing within a timeframe.” 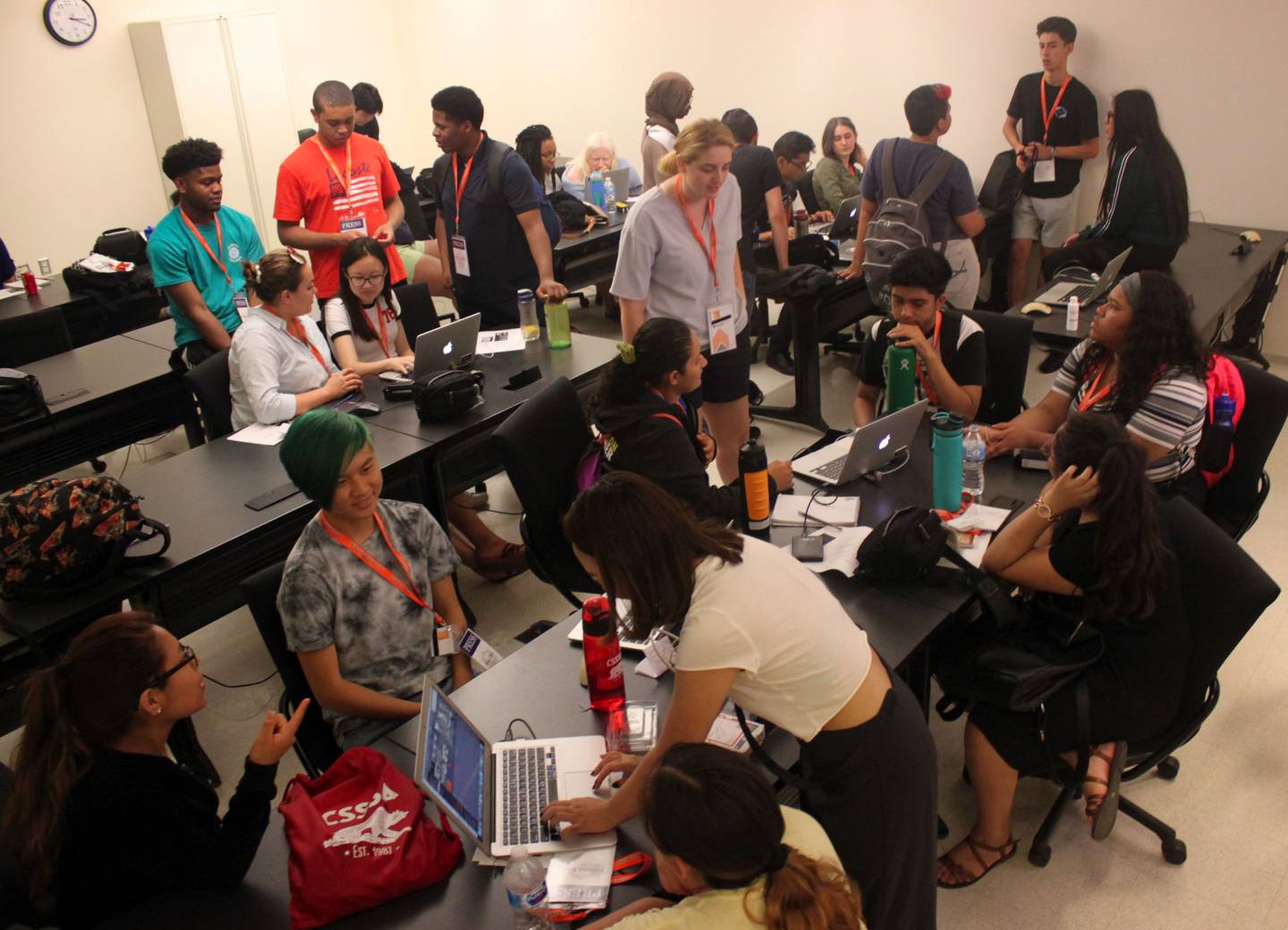 For more than a week, the student journalists fanned out in groups throughout the Princeton area working on articles ranging from investigative reports and political stories to profiles. They reconvened at their makeshift newsroom in the Friend Center to compare notes and to write and edit their stories, which were published in a newspaper, The Princeton Summer Journal.

The students’ newsgathering was interspersed with talks by Princeton faculty and administrators, who gave them a taste of academic discourse and encouraged them to pursue undergraduate studies.

Most of the participants attend under-resourced high schools, where students typically don’t go on to elite colleges, Just said.

“They are all top students at their high schools, but most of their schools aren’t used to having students apply to Ivy League schools,” he said. “The idea is to get them to these elite schools, have them join the school newspaper, take journalism classes and eventually go on to work at top publications.”

During the last days of the program, the students worked on deadline preparing a special edition newspaper, The Princeton Summer Journal, for publication. But they also took breaks to learn about the college application process and meet with college recruiters.

“It made a difference for me getting into college,” said Jeannie Regidor, a 2015 SJP alumna who attends Harvard University. “The college counseling these kids get is great.” 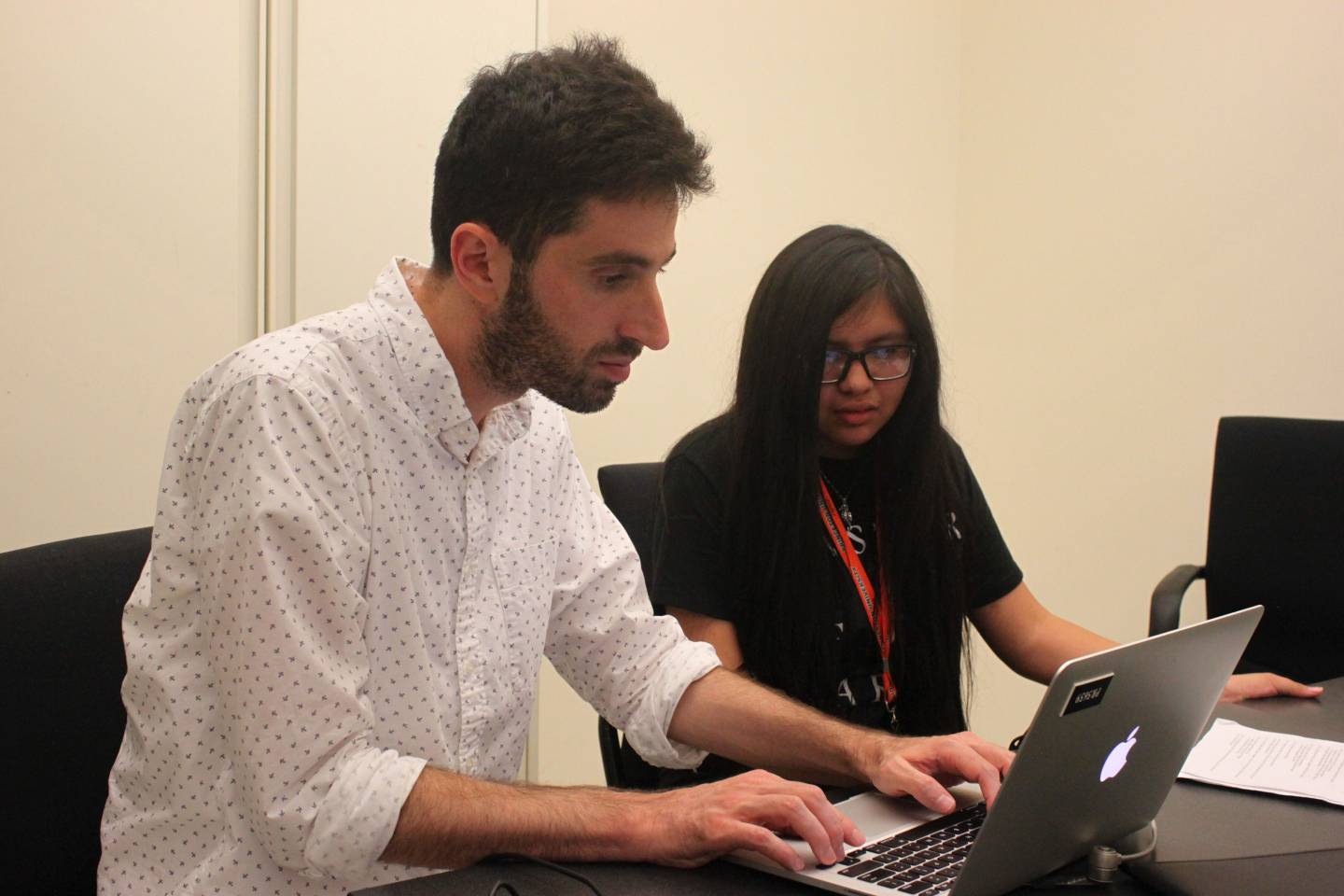 SJP Executive Director and Co-Founder Richard Just, a 2001 Princeton alumnus and editor of The Washington Post Magazine, works on an article with Christina Maldonado, a student from Mentmore, New Mexico.

Over the years, 21 SJP graduates have attended Princeton. Dozens of others have gone on to Ivy League and other elite institutions including Harvard, Yale University, the University of Pennsylvania, Cornell University, Barnard College and the Massachusetts Institute of Technology.

Those who have chosen to pursue journalism careers after graduation form a growing network, landing in newsrooms at NPR, CNBC, Newsweek, MLB.com and Mother Jones, Just said.

Some former participants return to SJP, acting as counselors for the program. Regidor attended this year along with seven other SJP alumni.

“Working with younger students who were in similar positions that I once was, I was reminded of the amazing support that I received from SJP,” said Franklin Sooho Lee, a 2010 participant, who also returned as a 2018 counselor.

Lee earned a B.A. at Harvard and an M.A. at Georgetown University and last year published a book, “The Art of Napping: The Sleeping Samurai and the Dormant Dragon,” which addresses the growing problem of sleep deprivation in major cities throughout the world. He works as a paralegal for Lutheran Social Services of New York.

“The plethora of workshops and speakers — booked not only throughout the long, summer day but also for breakfast, lunch and dinner — equipped me with incredible knowledge and skills to better navigate college and the broader world,” he said.

SJP alumni not only go on to fill top journalism jobs, but they also return to the program to work with newer classes of attendees. Tonya Riley, a Brown University alumna and a fellow at Mother Jones who attended SJP in 2010, spoke with this year’s cohort about social media and the spread of “fake news.”

Spending time on Princeton’s campus and seeing how other low-income and first-generation college students like Regidor and Lee have succeeded has helped this year’s cohort of students envision themselves in a similar place a few years down the road.

Prettystar Lopez of the Bronx, New York, said although she excels academically at her high school, attending a school like Princeton didn’t seem attainable for her. “Now that I’m here, the dream of coming to an Ivy league school doesn’t seem so far away,” she said. “I’m getting comfortable here.” 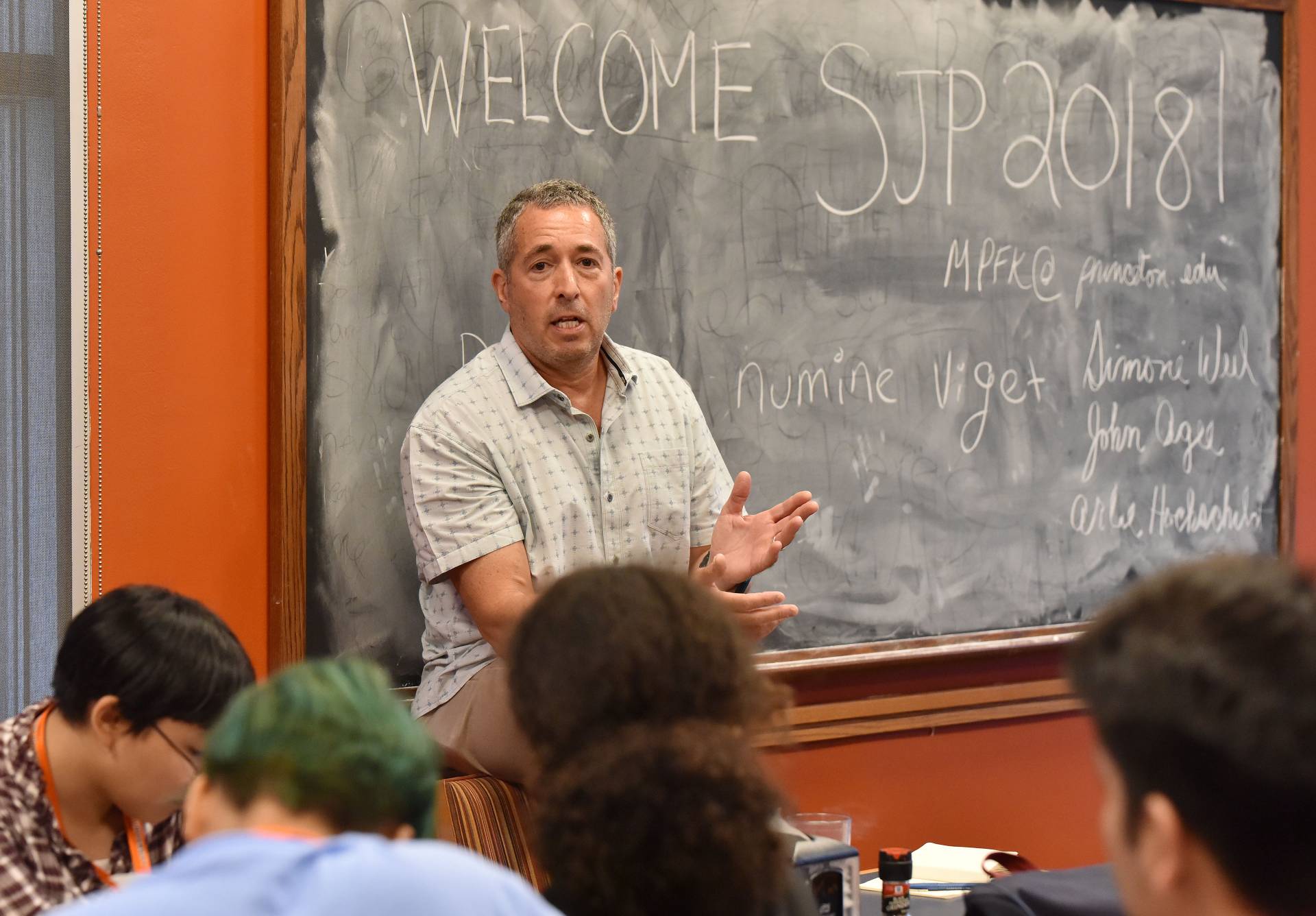 Students had the opportunity to interact with Princeton faculty over meals to get a taste for academic discourse and learn more about issues of the day. Eldar Shafir, the Class of 1987 Professor in Behavioral Science and Public Policy and professor of psychology and public affairs, shared his insights into how people can make wrong assumptions. 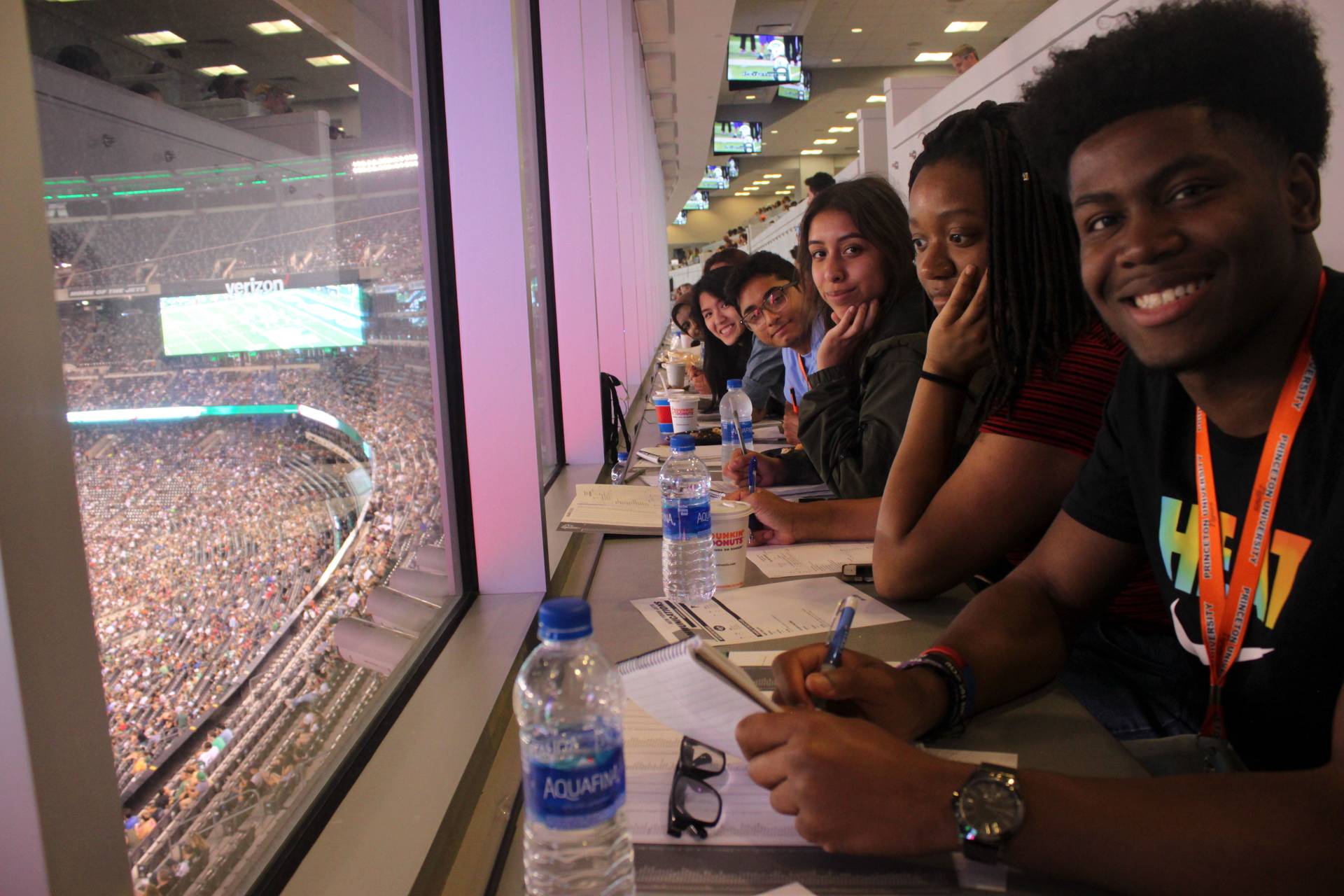 SJP attendees had a bird’s-eye view of the New York Jets’ first preseason game against the Atlanta Falcons while reporting from the press box at MetLife Stadium. 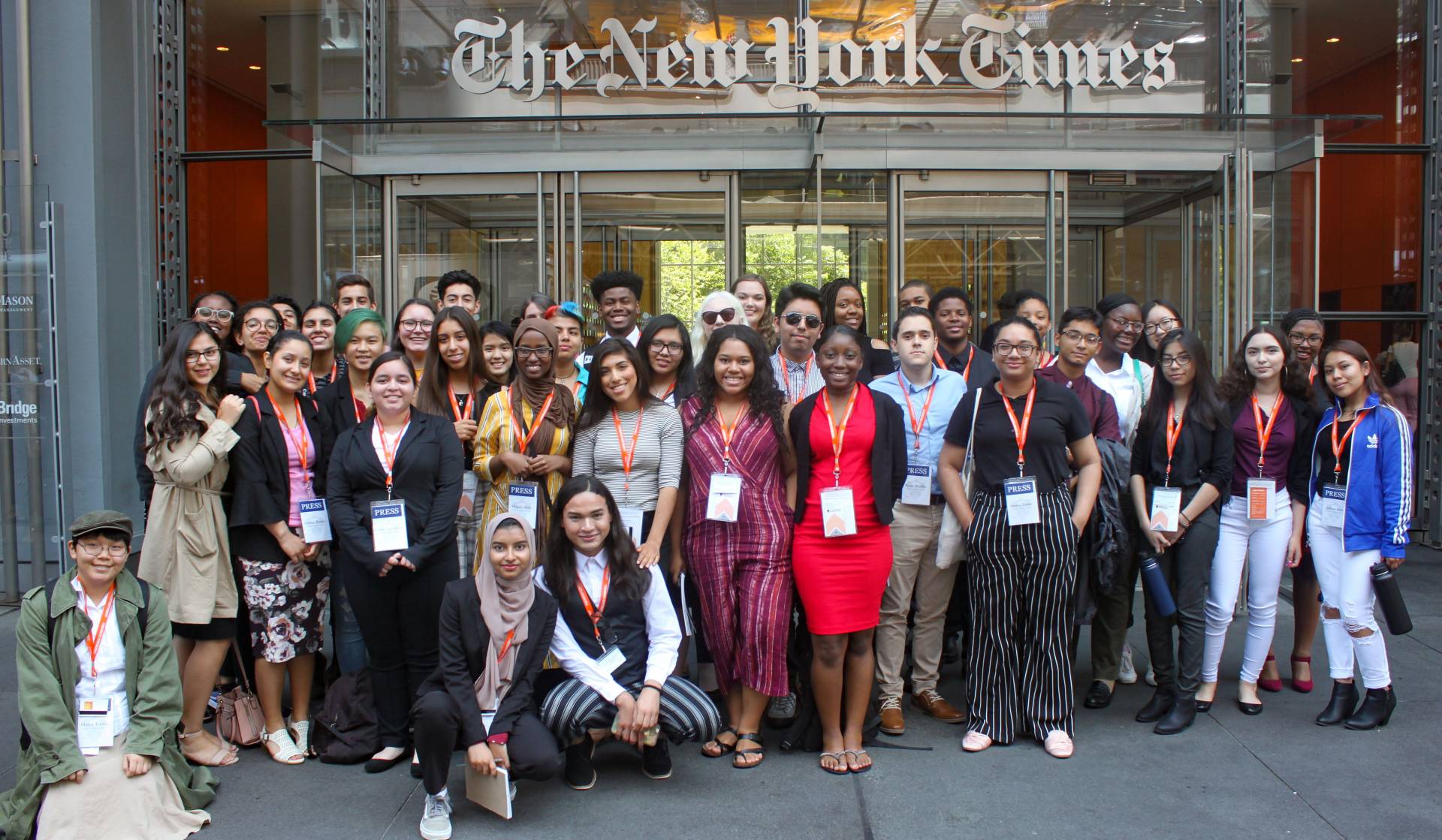 The students spent a day in New York City touring newsrooms and speaking with journalists and editors at The New York Times, HuffPost and Bloomberg.