The four rows of seats in the Blue Room, where New York City mayors hold press conferences at City Hall, were occupied. Spotlights in the corners illuminated the lectern where deputy mayor Edward Skyler stood. He surveyed the outstretched hands in the audience and pointed to Gloria Medina.

"I was wondering how old you are and how it feels to be the youngest deputy mayor in history," she asked.

"Could you explain what your relationship with Mayor Bloomberg is like?" said Onyebuchi Chilaka when he was called on for the next question.

"What political party do you belong to?" Angela Fabunan asked later.

Those posing the questions were not members of the New York media. They were students attending the Princeton University Summer Journalism Program, a 10-day camp that offers high school students from underresourced financial backgrounds an opportunity to gain intensive, hands-on experience in journalism. Participants pay nothing to attend. 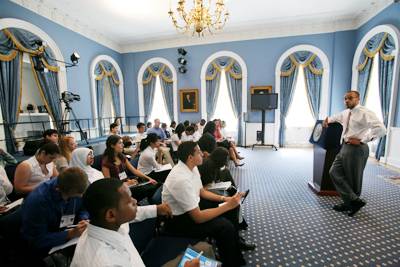 "I want to be in journalism to change the world somehow," said Fabunan, who didn't feel nervous asking Skyler about his political loyalties. "Coming here to City Hall inspires me. I'm getting to ask questions like that to people in those positions. If I was just a regular person, I wouldn't be able to ask these questions."

After the 20 students in the program finished questioning Skyler on Aug. 8, they interrogated two more deputy mayors, Daniel Doctoroff and Dennis Walcott, and The New York Times City Hall bureau chief, Diane Cardwell. Then they hit the streets, breaking into small groups to report on redevelopment in Harlem, the rebuilding at Ground Zero and the proposed Atlantic Yards project in Brooklyn. Later that week each student wrote an article on one of several topics that made use of their reporting. Earlier in the day they toured The New York Times and chatted with op-ed columnist Bob Herbert, who told them that, to make ends meet when he had his first newspaper job in Newark, N.J., he worked nights as an upholsterer. 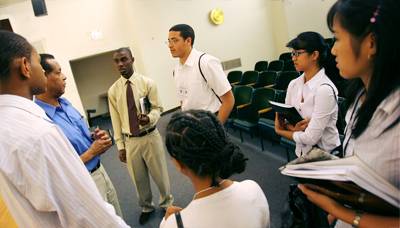 On a visit to The New York Times, the students sought career advice from op-ed columnist Bob Herbert (left, in blue shirt).

"We hope they got a real taste of what it's like to cover a city and be a political reporter," said Sophia Hollander, a member of Princeton's class of 2002 and one of several Princeton alumni who help run the program. Now a speechwriter and policy analyst at City Hall, Hollander asked the deputy mayors to participate in the mock press conference.

During the 10 days that they lived on Princeton's campus, the students discussed ethical dilemmas that journalists face, talked about sports reporting and practiced writing feature stories for the newspaper they produced at the end of the program. They also met with a Pulitzer Prize-winning reporter for The Washington Post, had meals with three Princeton professors and attended a broadcast journalism workshop with an editor from ABC News.

High school senior Leslie Primack said the program was exposing her to elements of journalism she had never thought about before.

"I'm on my newspaper at school, but unfortunately they don't really teach us how to write an article and how to make it interesting," she said. "We're learning a lot about current events and national events."

Primack interviewed Princeton molecular biology professor Ihor Lemischka about his work on stem cell research for an article she wrote during the program's session on feature writing.

A second aim of the program is to encourage the students to apply to competitive universities they might not have considered, as those schools often serve as the pipeline to the best jobs in journalism. The students attended seminars about how to choose the right college and how to navigate the financial aid process, took a practice SAT exam and worked on writing personal narratives to include in admission applications.

Walter Griffin, who attended the program last year, was one of eight former participants who returned this summer to serve as mentors to the students.

"Being in the program gave me the push to apply to schools that I always had on my mind," Griffin said. "They helped me do more with my writing, and they pushed me to take the SAT again, and my score jumped 150 points." Griffin will be a freshman at Princeton in September.

Richard Just -- a 2001 alumnus who directs the program along with three of his classmates, Michael Koike, Greg Mancini and Rich Tucker -- said the returning students are invaluable role models for the current students. "It's great for them to see others who were in their situation one, two or three years ago, and see that they have all gone on to great schools, and many of them are serious about journalism," he said. "It tells them they can do it -- there is a pathway."

The program, now in its fifth year, was started by Princeton students who had worked at The Daily Princetonian. As of this summer, the program is part of the University and is overseen by the Office of the Vice President for Campus Life.