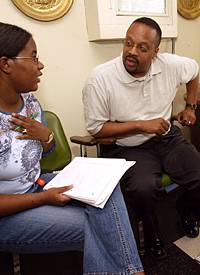 A once-fledgling summer journalism camp has grown up.

Born in the summer of 2002, the Daily Princetonian Class of 2001 Summer Journalism Program has diversified and matured into a working partnership between its founders and the former high school students they have helped.

"I came back to share my experiences," said Dotan Johnson, an inaugural participant in the program who has returned from college to be a counselor this year. "I'm the first African-American general manager of the Bowdoin Cable Network, and the (Princetonian) program made me believe it was possible, especially at a predominantly white college."

Johnson is now a junior at Maine's Bowdoin College and manages its student-run cable TV station. By coming back to the Princeton program, he hopes not only to train future journalists like himself, but also to discuss the college experience with students who may be unfamiliar with the ins and outs.

"They did so much for me that I came back to help demystify the college application process for a lot of students who are overwhelmed by it," Johnson said.

Johnson has returned with three other program alumni to join current and former members of The Prince staff on campus this summer. The program was started by former members of the editorial board of the University's student-run newspaper to provide training and mentoring to minority high school students who are interested in journalism.

The program continues into the school year, when mentors help the students with the college application process.

This year, 22 high school students from throughout the Northeast and Chicago are participating in 10 days of intense journalism instruction that runs through Aug. 19. Organizers described this year's crop of would-be journalists as "impressive," evidenced by the rapid-fire questions they ask while reporting for their assignments.

"Is this a family-owned business?" student Kabria Rogers asked community barber Jimmy Mack on a recent afternoon. The students were dispatched into the Princeton community to write feature stories for the newspaper they will produce at the end of the program. Rogers' group was assigned a story about Jimmy's Barbershop on John Street. "Why did you decide to open a barbershop?" she asked.

Julissana Moscoso meanwhile peppered the patrons with questions: "Explain to me again why you picked this barbershop." "Did you say consistency?" "It's a good price?"

Shayna Baggats-Porter stopped reporting long enough to explain that she enjoys the Princetonian program because "I've been writing my whole life," and she sees the program as a way to parlay her love of writing into a career.

He said the students' enthusiasm is yet another indication of how the summer program has evolved.

"For the last three years, the overall quality of the students has increased each year," said Just, a member of the class of 2001 and one of four Daily Princetonian alumni who founded the summer program. "Another thing is the increasing number of kids going to good colleges."

Former program participants have gone on to attend Cornell, the University of Virginia, Williams, Pomona, Barnard and New York University.

And while the summer initiative began as a program to encourage black and Latino high-school students to cultivate their interest in journalism, students from all racial backgrounds now participate.

"But the overall mission is still to help diversity journalism," said Just, noting that "editorships at the top college newspapers are the best pipelines into the top internships in journalism."

The program continues to draw its students from urban high schools, and this year had a record 110 applicants. The program's founders are looking for resources to run the operation year-round.

Current funding comes from Princetonian alumni fund raising; the University; the Class of 1969 service fund; and in-kind gifts from such organizations as the Garden Theatre and the New York Jets, who donate tickets to movies and games that students write about as part of their training.

"There's a lot of work with setting it all up, with recruitment, and then we step in after the fall to help the students write their college applications," Just said. "We want to put a structure in place in the next few years where we can step back and let the day-to-day go to full-time staff."

As they seek to expand and grow, the program's organizers seem to have embraced the message that founder Michael Koike recently passed along to the aspiring student journalists:

Budding journalists get tips on reporting and college admissions