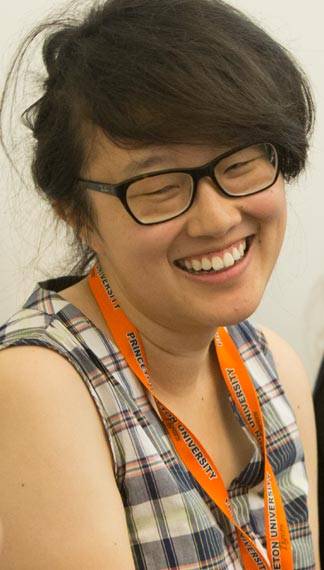 Amy Char, a 2012 alumna of the Princeton Summer Journalism Program (SJP) and a student at Georgetown University, laughs during a workshop at this year's session. SJP brings high school seniors from low-income backgrounds to the Princeton University campus each summer for a 10-day program on journalism and college admissions. SJP alumni, such as Char, mentor the high school students as program counselors.

Her smile disarmed skeptical New Yorkers as she announced, "Hi! I'm a student journalist and I would like to know your opinions on Donald Trump." ShiWanda Sheard-Perry of West Helena, Arkansas, spent the evening of Aug. 6 gathering interviews for a story on the first Republican primary debate. As a student in the Princeton University Summer Journalism Program (SJP), she was devoting 10 intense days to reporting on, and beyond, Princeton's campus.

"I developed friendship and partnership with everyone in the program," Sheard-Perry said. "I made lifelong friends and I learned a lesson that will keep me going: The biggest challenges have the greatest outcomes."

Founded by Richard Just, Michael Koike, Gregory Mancini and Rich Tucker of Princeton's Class of 2001, the program — now in its 14th year — brings a group of high-achieving high school seniors from low-income backgrounds to Princeton every summer for a rigorous workshop on journalism and college admissions. (The family income cut-off for the program is $45,000, and all expenses are paid for the participants thanks to alumni donations, University support and foundation funding.)

At the end of the program, students write and produce a newspaper called The Princeton Summer Journal.

"The Summer Journalism Program brings together the best of Princeton: a fusion of the alumni who started the program; professors who share their expertise with our students; and funding for the program's budget, much of which has come over the years from generous Princeton alumni," said Just, who is the editor of National Journal magazine.

Since 2003, SJP has partnered with Princeton Internships in Civic Service (PICS) and the Pace Center for Civic Engagement  to hire a student intern every summer. The intern works with SJP's founders, directors and counselors to organize the program. (Many of the people who now lead the program every year are themselves SJP alumni.)

This year, Azza Cohen, Class of 2016, was the program intern; she organized the schedule and chronicled the students' experience for this story. Putting together the schedule means inviting Princeton professors to share meals with the students, hosting celebrated journalists from various publications to teach workshops and planning reporting projects and field trips. 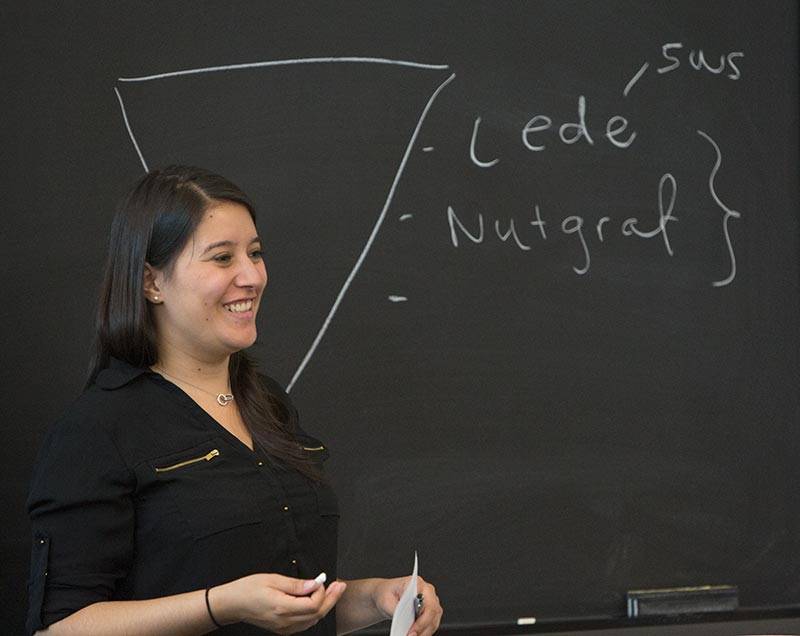 Students attended workshops that taught journalism through many lenses, including a presentation on sports reporting by SJP alumna Maria Guardado of The Star-Ledger. (Photo by Denise Applewhite, Office of Communications)

Students this summer attended workshops that taught journalism through a kaleidoscope of lenses. Workshops included: Binyamin Appelbaum of The New York Times on economics; Sarah Blustain of the Investigative Fund at The Nation Institute on editing; Maria Guardado, a former SJP student and now a reporter for NJ.com and The Star-Ledger, on sports journalism; and Ryan Lizza of The New Yorker on politics. On their trip to New York City, students visited the offices of Bloomberg, Time, The New York Times and The Daily Beast.

Kinohi Nishikawa, an assistant professor of English and African American studies, spoke to the students over dinner on the Black Lives Matter movement.

"The students were primed to work through the perils and possibilities of covering some of the most difficult social issues young people face today," Nishikawa said. "Their questions were thoughtful and impassioned, critical yet engaged: indeed they inspired a lot of confidence in me about the future of American journalism!" 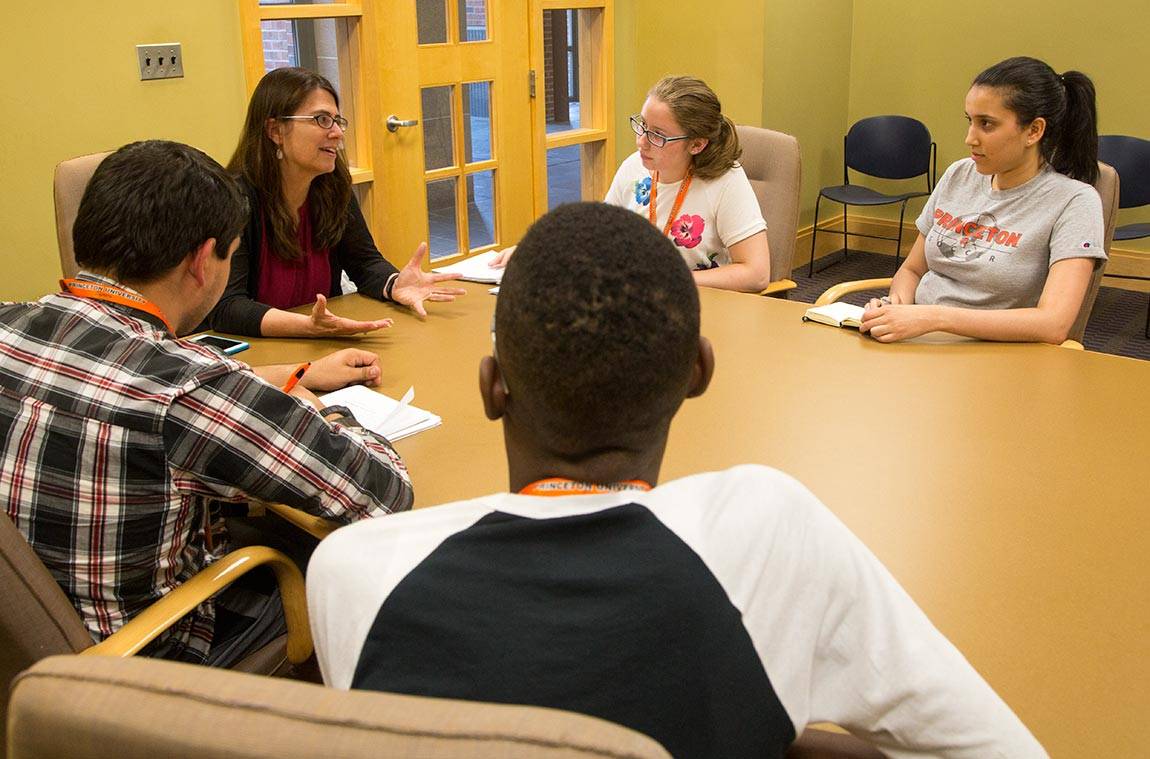 Professor of History Alison Isenberg and filmmaker Purcell Carson, a documentary production specialist at the Woodrow Wilson School of Public and International Affairs — who are working on a documentary about 1960s protests in Trenton, New Jersey, following the assassination of Martin Luther King Jr. — taught a workshop called "Turning Fact into Film." Isenberg reflected, "The students helped us think in new ways about the film and our goals for it."

At SJP, learning goes both ways, and the students are always curious to find the truth and unafraid to ask bold questions of every speaker. 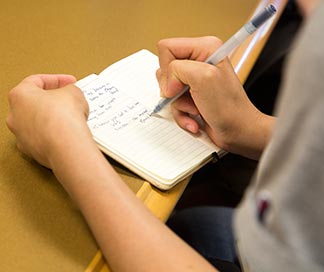 An SJP student writes notes during an interview. At the end of the program, the students produced a newspaper called The Princeton Summer Journal. (Photo by John Jameson, Office of Communications)

One of the speakers, Tasnim Shamma (a 2006 SJP alumna, 2008 PICS intern and 2011 Princeton graduate), lives the type of legend that SJP hopes will inspire students.

"You're taking a group of high school students from low-income backgrounds and telling them that yes, their voices do matter," she said. "And yes, the stories in their communities are significant. It transformed what felt out of reach into a tangible career path."

Shamma works as a reporter for WABE, a National Public Radio affiliate in Atlanta. She said she has continued to come back to teach at SJP because the students "are so hard-working and cognizant of journalism's role in our democracy and I return to work motivated and feeling very optimistic about the future of journalism."

The program is extremely competitive; this year's class of 23 students was chosen from a pool of about 200 applicants. Students this summer covered an array of topics: an investigation of stores in Trenton that are stocking expired medicine and food; reports on the Aug. 4 Trenton Thunder baseball game; profiles of Princeton professors Jenny Greene, associate professor of astrophysical sciences, and Stephen Macedo, the Laurance S. Rockefeller Professor of Politics and the University Center for Human Values; film and theater reviews; and pieces on Donald Trump, New Jersey Gov. Chris Christie, and Andrew Zwicker, a candidate for New Jersey State Assembly. 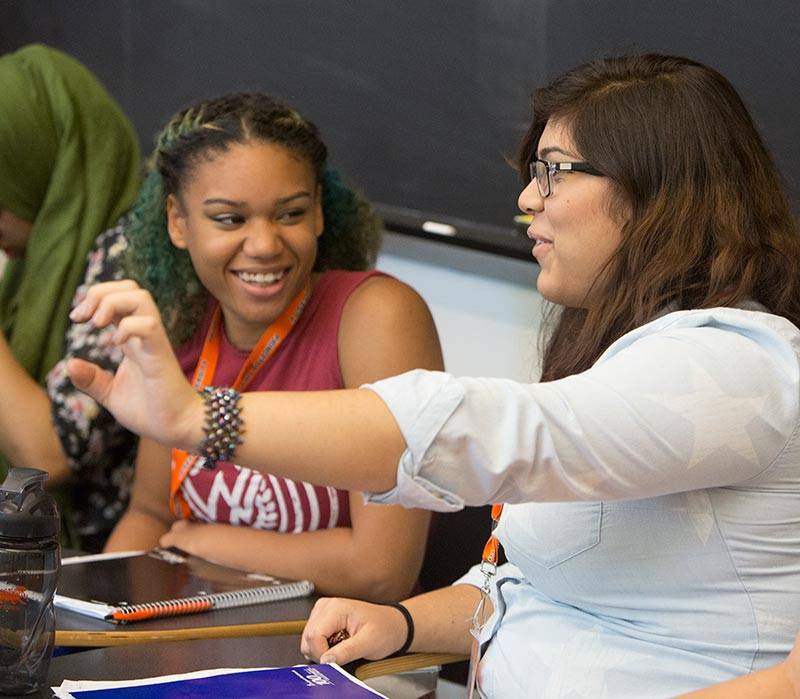 Jada Fitzpatrick of New York City (left) talks with Jocelyn Molina of Roma, Texas, during a workshop. In addition to learning about journalism, the high school students receive guidance through the college admission process from SJP counselors during the months following the program. (Photo by Denise Applewhite, Office of Communications)

Jada Fitzpatrick, of Queens, New York, said: "As I near the end of the program, I can truly say that I am grateful for all of the knowledge that has been instilled in me. I can now say that I have a firmer grasp on what it really means to be an intellectual, and the steps I must take to get there."

But publishing the program's newspaper does not represent the end of the collaboration — it's only the beginning. The counselors are paired with students to help them through the college admissions process during the months following the program. In recent years, more than half of SJP students have gone on to highly competitive colleges. From last year's class, three students will attend Princeton this fall, meaning that there will be nine SJP alumni attending Princeton this academic year. Other students from last year's class are headed to Columbia University, Cornell University, Dartmouth College, Georgetown University, Harvard University, Stanford University and the University of Pennsylvania, among others.

Toward the end of the program, Christina Gaspar of Oceanside, California, wrote on the SJP blog: "This program has helped me strengthen my voice through writing, allowing me to leave Princeton with memorable experiences. I became forever friends with incredibly intelligent, uniquely elegant, justice fighters, brilliant writers, great debaters and future innovators who will always remind me of our summer in Princeton." 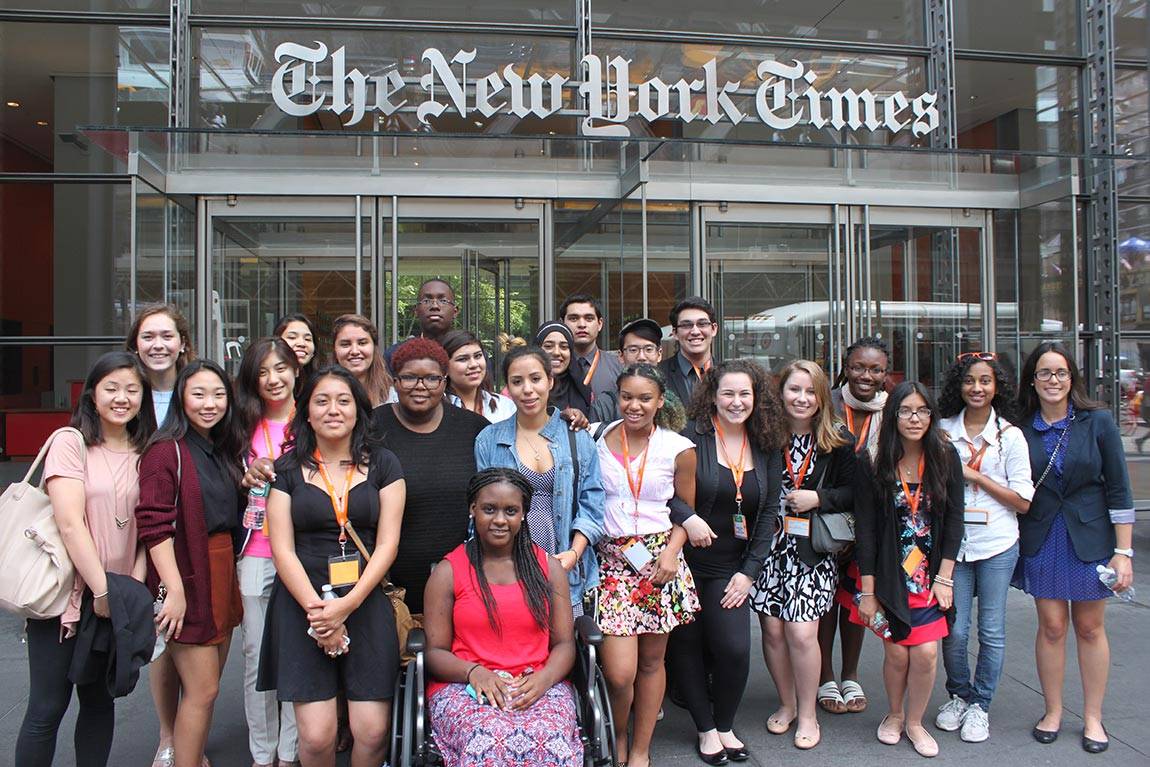 The high school students traveled to New York City to visit the offices of The New York Times and other media outlets. (Photo by Brian Rokus for the Princeton Summer Journalism Program)