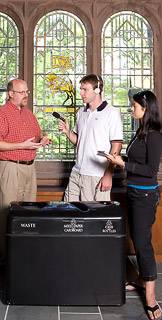 Students in the summer workshop on "Communicating Sustainability" interviewed several Princeton staff members about their work on campus sustainability efforts. From left, Jon Baer, director of building services, discusses recycling with rising senior Alex Renaud and rising junior Jessica Hsu in front of one of the many three-in-one bins on campus. The students are producing podcasts and videos from the interviews.

Some participants possessed experience handling video cameras and working with digital editing equipment. Others had solid backgrounds in the science behind the issues.

But each of the seven Princeton students enrolled in this summer's workshop on "Communicating Sustainability" came with a desire to better tell the story of this contemporary movement to a broader audience.

"This field seems to be growing, but it's all about the presentation," said Jessica Hsu, a rising junior who is majoring in civil and environmental engineering. "[Playing on] guilt is no longer effective. We need to make the presentation engaging and make people concerned without feeling guilty."

Offered by the University's Office of Sustainability and supported by the High Meadows Foundation, the intensive four-week training program took place on campus in June and July. The goal was to provide undergraduates with an orientation on sustainability issues and to train them in the variety of skills needed to produce pieces on these issues intended for placement on radio, television and the Web. By the end of the session, they had created initial versions of podcasts and short documentary videos on topics ranging from recycled paper to green roofs.

Shana Weber, the University's sustainability manager, is planning for the summer workshop to become a year round program under the Princeton Student Environmental Communication Network.

"During the academic year, I hope that it will become a combination of coursework -- similar to a new course we offered last spring -- and internships in the Office of Sustainability," she said. "We especially want to build on the momentum of this summer's program. We might have an intern this coming school year producing podcasts for the Office of Sustainability website so that we have a new podcast every week or two on some topic about sustainability."

The eventual goal is to develop a nationwide network of students that produces these stories at institutions across the country for anyone who wants to use them. "We want to build a strong program here at Princeton so that we can encourage other institutions to participate in the network," Weber said. 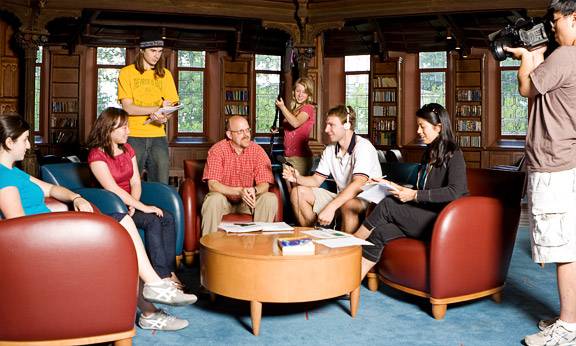 The entire group from the workshop participated as Renaud and Hsu continued the interview with Baer. Pictured with them are, from left, rising sophomores Kristen Davila and Dawn Zhao (seated) and rising juniors Doug Sprankling (with notepad), Amy Seymour (with boom microphone) and Alan Yang (with camera).

To run this summer's program, Weber brought in David Benin and Jessica Kellett, who had spearheaded a similar program at Sonoma State University in California. Benin is a Ph.D. candidate in the Department of Communication at the University of California-San Diego with a background in both film and environmental issues, and Kellett has led environmental policy and education programs since graduating from Colby College five years ago.

"One of the interesting aspects of this program is merging knowledge about sustainability topics with specific media," Benin said. "The students need to learn how to express really complicated issues in compelling ways for general audiences. Certainly these are very scientific issues and we want them to have the rigor of science, but a film, a documentary or a podcast is a very different medium than an academic paper.

"We want to try not to lose the complexity and some of the specificity of the issues," he said, "but we also want to make it available to larger audiences. We want [the students] to understand the possibilities, but also the limitations and how these messages will translate." 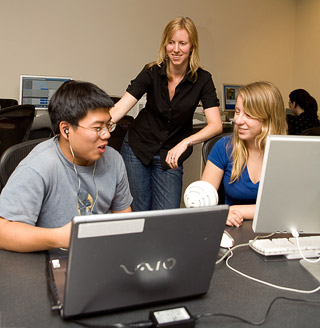 According to Kellett, students applied and were selected for the program based on their interest in sustainability and their skill levels in radio and television production. While no credit was offered, the students received a stipend as well as free room and board.

"I was really into video production and journalism in high school and hadn't had a chance to pursue them at Princeton," said Doug Sprankling, a rising junior majoring in English. "I had heard this concept of sustainability as a buzzword, but never thought of it as the modern evolution of environmentalism as we know it. It's much more all-encompassing that I could have imagined."

Dawn Zhao, on the other hand, was drawn by the environmental aspect of the program. "I'd never had any film experience," said Zhao, a rising sophomore who is considering majoring in anthropology and earning a certificate in environmental studies. "I was surprised the filming aspect takes so much time."

Alex Renaud, a rising senior majoring in ecology and evolutionary biology, said, "As a science major, I was interested to hear we need to better communicate. The complexity of what goes into every shot creates an image of someone in a certain light for better or worse, depending on how you present things."

In the workshop, Hsu and Renaud were developing a podcast about Princeton's energy facilities and their overall efficiency. Ted Borer, energy plant manager, was one of the speakers during a program session.

"The program has really exceeded our expectations, especially with the lectures and the field trips," said Hsu. Speakers included other Princeton staff members involved in campus sustainability efforts, journalists and local environmental activists. The students went on field trips to the studios of WNYC, the public radio station in New York City; open space and gardens in the Princeton area; and Isles, a nonprofit organization in Trenton. 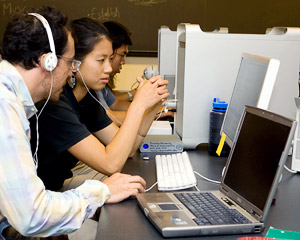 As Hsu, Renaud and their fellow participants worked in the Friend Center's digital editing lab during one session this summer, Benin and Kellett offered advice on different ways to improve the podcasts. "One of the goals is for them to use their own voice -- to speak from a college student's perspective," Kellett said.

Looking over Hsu's shoulder, Benin offered, "That point may be important in the larger scheme of things, but not for this story," noting that the podcast was to last between two and a half and five minutes.

The students later worked in groups to produce videos of five to 10 minutes each.

When they return this fall, the students plan to finish their work on the podcasts and videos with the hope of debuting them at a special event in October.