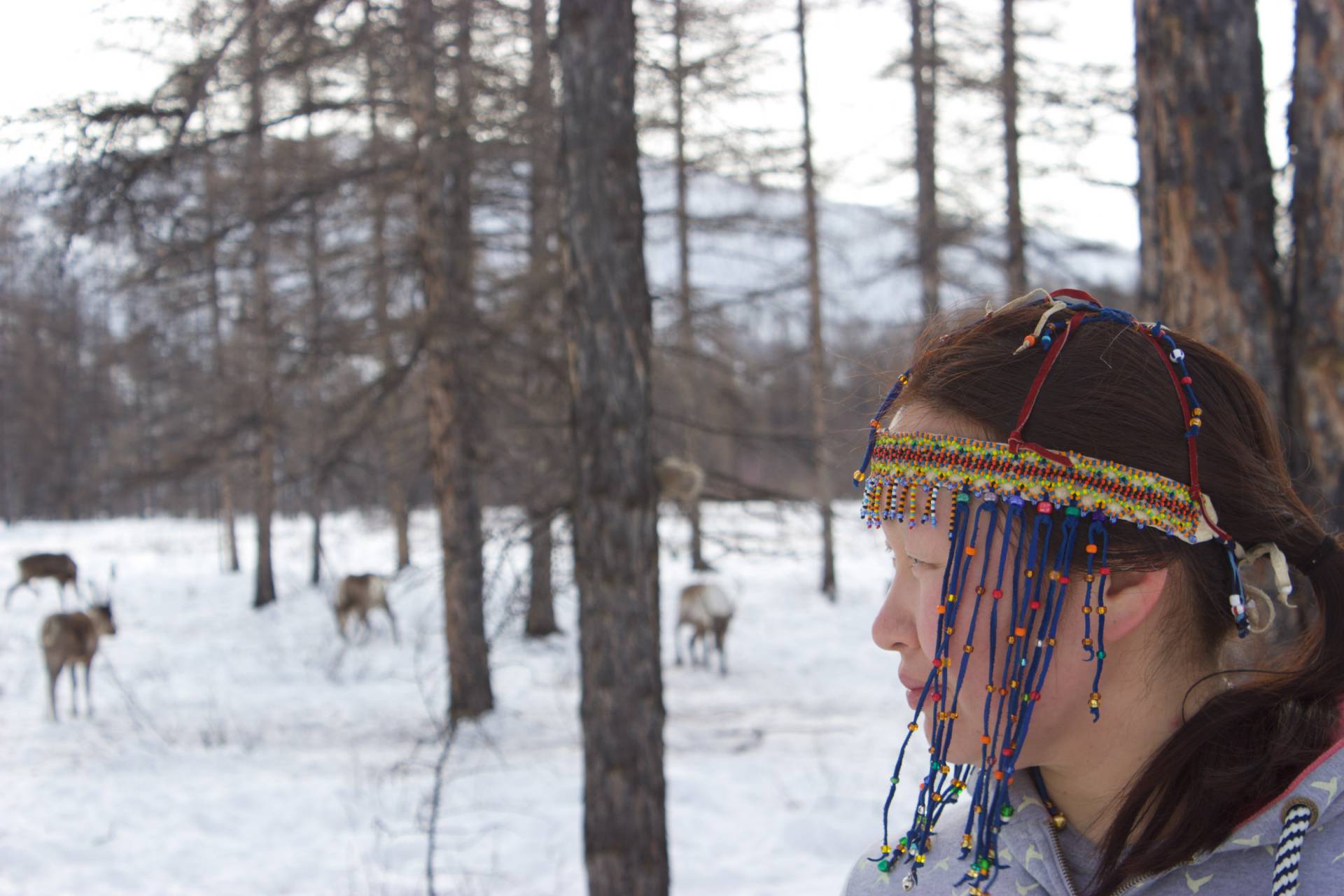 Olga Ulturgasheva, a member of the Eveny Indigenous group of Yakutia (Siberia), a senior lecturer in social anthropology at the University of Manchester and a Pathy Distinguished Visitor in Canadian Studies at Princeton University, is among several Indigenous scholars, artists and activists visiting campus this fall as Princeton advances new Indigenous initiatives. Pictured, Ulturgasheva conducts ethnographic research at a Siberian reindeer herding camp.

“As these varied efforts demonstrate, Princeton University seeks to build relationships with Native American and Indigenous communities through academic pursuits, partnerships, historical recognitions, community service and enrollment efforts,” said Shawn Maxam, senior associate director for diversity and inclusion in the Office of the Provost. “This fall our office will be convening an institutional advisory committee that advises and provides recommendations to the University regarding initiatives, opportunities, best practices, and policies to expand and fulfill these goals and aspirations.”

The seminar series — a Collaborative Humanities Project of the Humanities Council, supported by a 2021-22 exploratory grant — runs through November and is bringing leading Indigenous scholars, artists and activists to campus as a way of fostering cross-disciplinary dialogue.

The series includes a talk on Oct. 28 by Olga Ulturgasheva, a member of the Eveny Indigenous group of Yakutia (Siberia), a senior lecturer in social anthropology at the University of Manchester and a Pathy Distinguished Visitor in Canadian Studies at Princeton, as well as a symposium on Nov. 4 on the Munsee land, language and people. (More details are available below.)

Princeton University sits on land that is considered part of the ancient homelands of the Lenni-Lenape peoples, who were the first inhabitants of eastern Pennsylvania and parts of New York, New Jersey, Maryland and Delaware.

Recognition of Indigenous peoples and support for Indigenous students and scholars is advancing at Princeton in several areas:

• The University is working with the three federally recognized Lenape tribes to create a land acknowledgment marker and memorial garden that will honor the Lenape. The land acknowledgment marker will be located near Prospect House and unveiled this academic year. The garden will be in the woodlands north of Lake Carnegie. There will be a ceremony to celebrate the garden’s completion in Spring 2022.

• Princeton Admission is a partner of College Horizons — a college-access organization focused on the academic journeys of Native students. The Admission Office has served as host to College Horizon’s pre-college summer program in past years and representatives from the office annually participate in the program as “faculty members,” advising prospective students on the application process, the college essay and financial aid resources. The Admission Office engages with several regional conferences and fairs and utilizes data from the Bureau of Indian Education to guide recruitment travel planning with peer institutions to reach majority Native populations.

• A search is underway for a new professor of Indigenous studies, endowed by a $5 million gift from the Schwab Charitable Fund made possible by the generosity of Wendy Schmidt and Eric Schmidt, Class of 1976, in consultation with the Schmidt Family Fund. The position will build on Princeton’s interdisciplinary strengths and expand its faculty expertise in Indigenous scholarship.

• This fall’s Indigenous seminar series kicked off in September with a discussion with Nick Estes, a citizen of the Lower Brule Sioux Tribe and assistant professor of American studies at the University of New Mexico. It will conclude with Anton Treuer, Class of 1991, a professor of Ojibwe at Bemidji State University, who will discuss the legacy of residential boarding schools. The series is presented by the Native American and Indigenous Studies Initiative at Princeton (NAISIP), which is being supported by a Humanities Council grant for the 2021-22 academic year and includes Princeton faculty, staff and students, and seeks to increase awareness and understanding of the cultural traditions and experiences of Indigenous people in the Western Hemisphere and globally. Co-sponsors include the Program in American Studies and the Fund for Canadian Studies. The NAISIP working group, convened by Sarah Rivett, professor of English and American studies, designed the seminar series to rethink the academic domains of knowledge and power in order to transform Indigenous-settler relationships.

• Ulturgasheva, a renowned Siberian anthropologist who recently received a 5-million euro “visionary” scholar grant for the study of disappearing Indigenous cultures, is also collaborating with Princeton students on the performance of a ballet on Indigenous themes to be premiered in Richardson Auditorium. The ballet, which will be simulcast in Siberia, is choreographed by her husband Sayan Ulturgashev, with music by Calvin Van Zytveld, Class of 2019, and artistic direction by Pilar Castro-Kiltz, Class of 2010. Mariana Gomez, Class of 2021, is conducting. The performance is funded by the Humanities Council, the Department of Music, the Princeton Institute for International and Regional Studies, and the High Meadows Environmental Institute.

• The Princeton University Art Museum has formed an Advisory Group for Indigenous North America, comprised of Indigenous community leaders and museum professionals, Native students and alumni, as well as other experts and leaders on and off campus. Gathering quarterly, the advisory group is providing the museum with the expertise and knowledge necessary to care respectfully for the Indigenous North American belongings in the museum’s collections and to work actively with Indigenous communities to build stronger partnerships. For the last four years, the Museum has prioritized collecting contemporary work by multiple generations of Native North American artists, from screen prints by Musqueam Coast Salish artists to a video installation piece by Ho-Chunk artist Sky Hopinka. Special attention has been given to contemporary artists and works that create conversational bridges with the museum’s collections of historical Native American art.

• An affinity space for Indigenous students will be available at Green Hall beginning this fall.

• The recently formed Native Alumni of Princeton (NAP) held its first Reunions event this year, “Coming Home: The Past, Present, and Future of Native Americans at Princeton,” with more than 80 participants. The group is working with current students on mentorship. Yolandra Toya Gomez, Class of 1988 and a member of the Jicarilla Apache Nation in northern New Mexico, and Roger Dube, graduate Class of 1976 and a member of the Mohawk Turtle clan, are serving as the group’s co-leaders. NAP’s mission is to support and strengthen the community of Princeton Native alumni, both with each other and with the University, by providing opportunities for connection and engagement, stimulating discussions and programs, personal and professional development, community service, and serving as a thought leader in Native initiatives. The group is represented on the Alumni Council Executive Committee which is the governing body of the Alumni Association. The Alumni Council honored Alfred Bush, former curator of Western Americana at Princeton University Library, with a 2020 Award for Service to Princeton in recognition of his many contributions to Princeton and the pivotal role he played in the recruitment and retention of Native American students and supporting the Native community broadly.

• Native American Heritage Month (NAHM) is annually celebrated on campus in November with programming planned collaboratively between the Carl A. Fields Center, Natives at Princeton and the NAHM Committee.