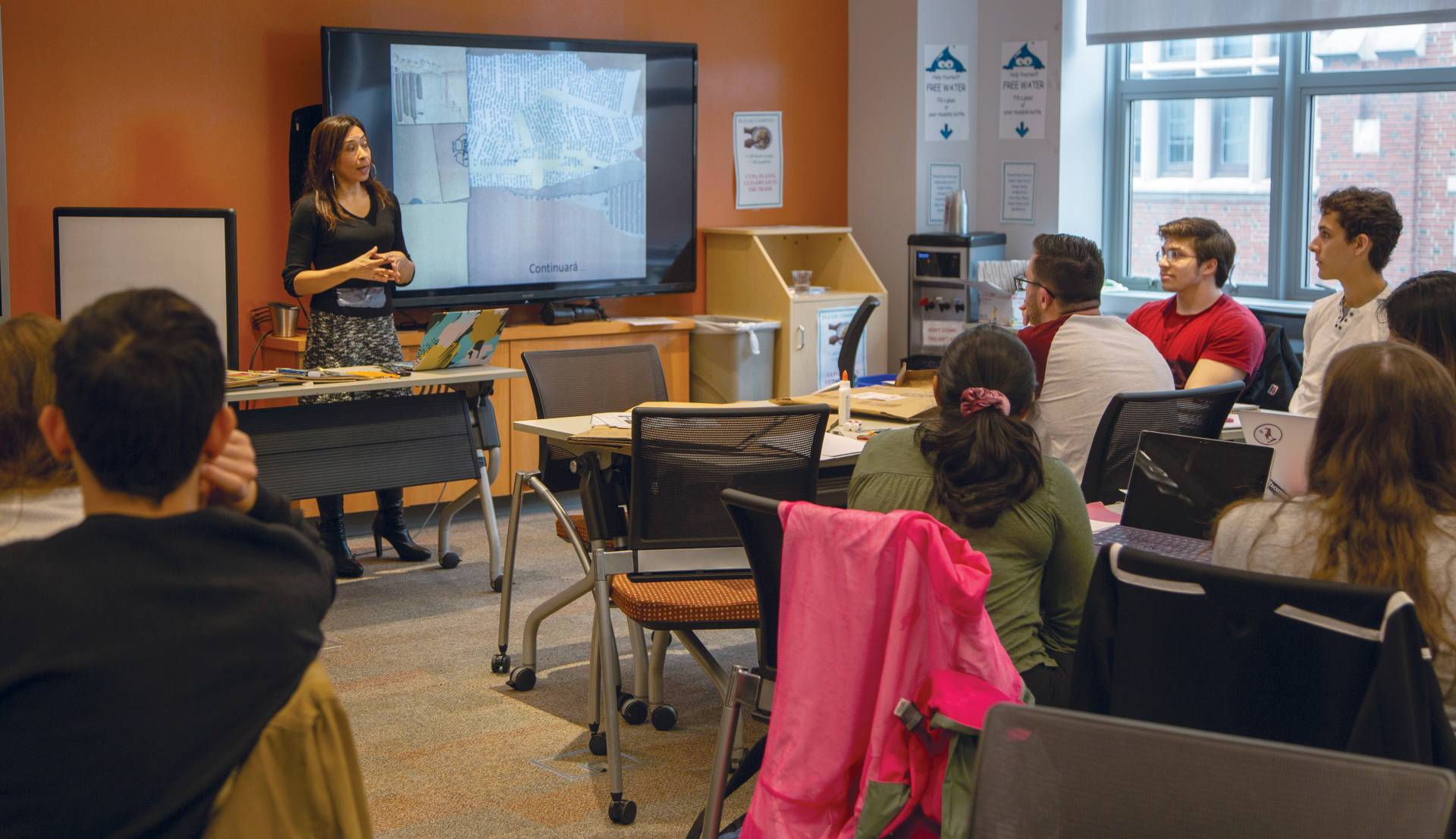 Carolina Espinoza Cartes (left), an anthropologist, journalist and editor from Chile, leads a class in the spring course "Rapping in Spanish," where students created their own books that were compilations of rap songs that they selected and edited themselves.

From Barcelona to Buenos Aires and Madrid to Mexico City, Spanish rap music and hip-hop brings people from all different backgrounds together. Like the music itself, the spring course “Rapping in Spanish” did the same for Princeton students.

Taught by Germán Labrador Méndez and graduate student Paula Perez-Rodriguez, the course explored Spanish rap and hip-hop as a kind of urban poetry by studying lyrics for things like linguistic rhythm and meter. The course also considered the music as social commentary that voices opinions about contemporary issues in Latinx society, including politics, sexism and immigration.

Students assemble the materials for their song books. The course was taught by Germán Labrador Méndez, associate professor of Spanish and Portuguese, and graduate student Paula Perez-Rodriguez. It was part of the Collaborative Teaching Initiative, which aims to foster graduate students’ professional experience through the design and co-teaching of an innovative undergraduate course. “Rapping in Spanish” was a natural extension of the instructors' overlapping interests in rap, poetry and contemporary urban cultures and politics.

“Teaching poetry today is difficult, but rap songs are poetry too,” said Labrador. “The aim of this course was to give students a knowledge of rap as a poetical genre and all of its complexities, inflections and social impact.”

“Prior to this class, I would simply enjoy a rap song but didn’t give much thought to its actual structure,” said Dani Peters, a junior concentrating in molecular biology. “Through exploration of different song characteristics such as rhythm and rhyme, literary devices, themes, and more, I now feel like I am able to recognize the more complex elements of a song that enhance its crafts and demonstrate the profound abilities of the rapper.”

In addition to discussing contemporary issues surrounding the music, Labrador and Perez-Rodriguez gave students an historical overview of the cultures and traditions from which Spanish rap and hip-hop emerged.

Senior economics major Eitan Sapiro-Gheiler said, “My biggest takeaway from the course was the depth of the musical and cultural context in which rap exists. Professor Labrador and [Perez-Rodriguez] brought a tremendous range of topics to bear, from the intersection of rap and globalization to Aristotle’s poetics to other forms of music once considered as ‘rebellious,’ like tango, samba and rock.”

He added, “We often talk about how music reflects its social context… I hadn’t realized, though, how valuable a clear and well-developed framework of rap within culture and history was for gaining a richer understanding of the songs themselves.” 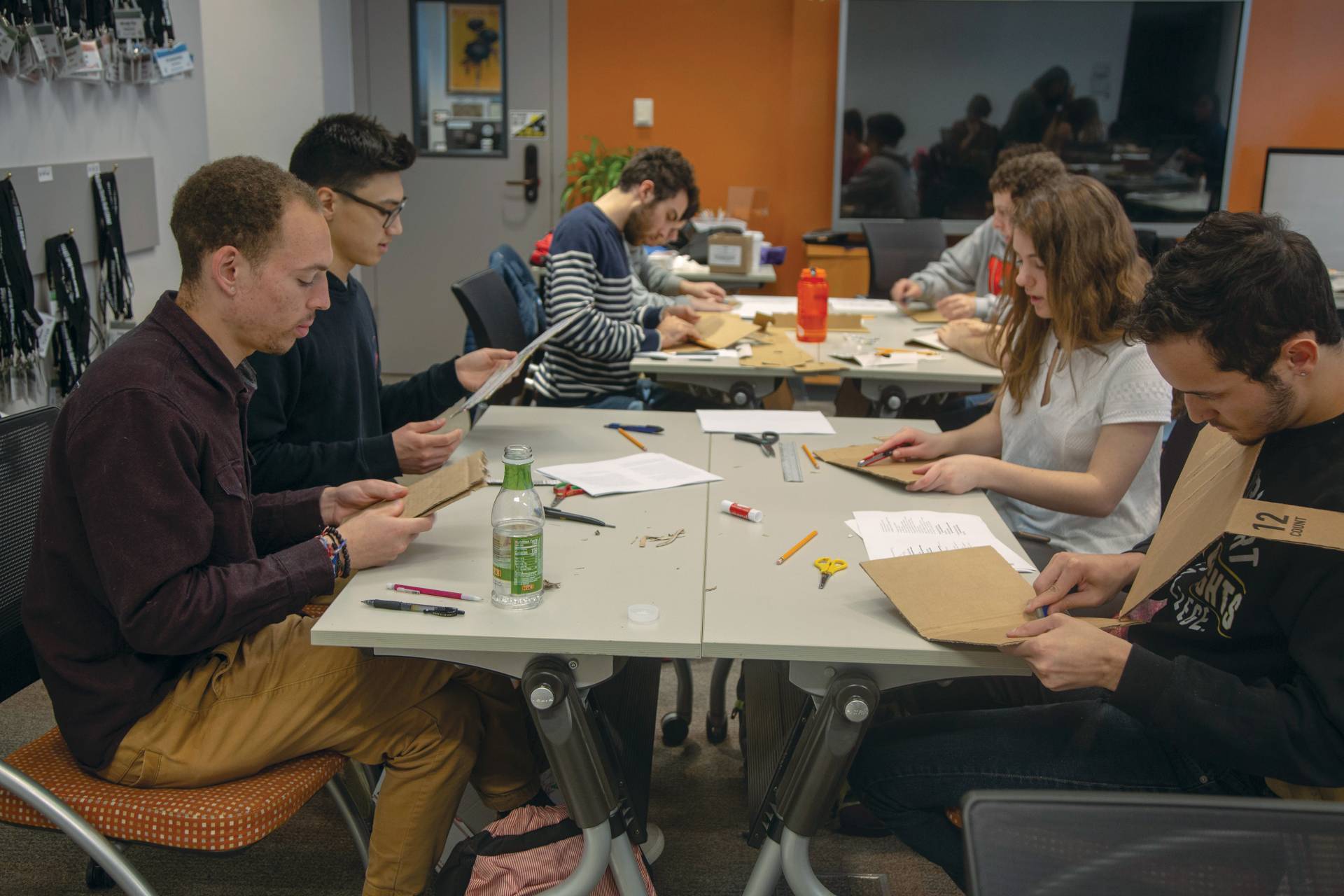 Cartes runs the website Meninas Cartoneras and is part of a worldwide initiative to produce do-it-yourself books out of recycled materials, which began in Argentina in 2001.

As a capstone to the course, Labrador and Perez-Rodriguez invited Carolina Espinoza Cartes, an anthropologist, journalist and editor from Chile. Cartes runs the website Meninas Cartoneras and is part of a worldwide initiative to produce do-it-yourself books out of recycled materials, which began in Argentina in 2001. Under Perez-Rodriguez’s supervision, students created their own books that were compilations of rap songs that they selected and edited themselves. Cartes helped the class assemble their materials into soft-cover books.

The course was part of the Collaborative Teaching Initiative, which aims to foster graduate students’ professional experience through the design and co-teaching of an innovative undergraduate course. For Labrador and Perez-Rodriguez, “Rapping in Spanish” was a natural extension of their overlapping interests in rap, poetry and contemporary urban cultures and politics.

“Teaching collaboratively has been a fantastic experience,” said Labrador. “It afforded [Perez-Rodriguez] and me the opportunity to share knowledge and test ideas with each other while providing the students with different points of view.”

Not only did “Rapping in Spanish” give students a deeper understanding of poetry; for some students, it also sparked a new appreciation for Spanish rap and hip-hop. “I’ve definitely started listening to more rap now that I have a bit of the knowledge and context to appreciate it; I’ve always found that knowing about the history of an art form helps me understand and analyze it, and this class has given me a foothold in this particular field,” said Sapiro-Gheiler.

Peters agreed: “I really enjoyed a lot of the music we worked with and will probably continue listening to it in the future!”