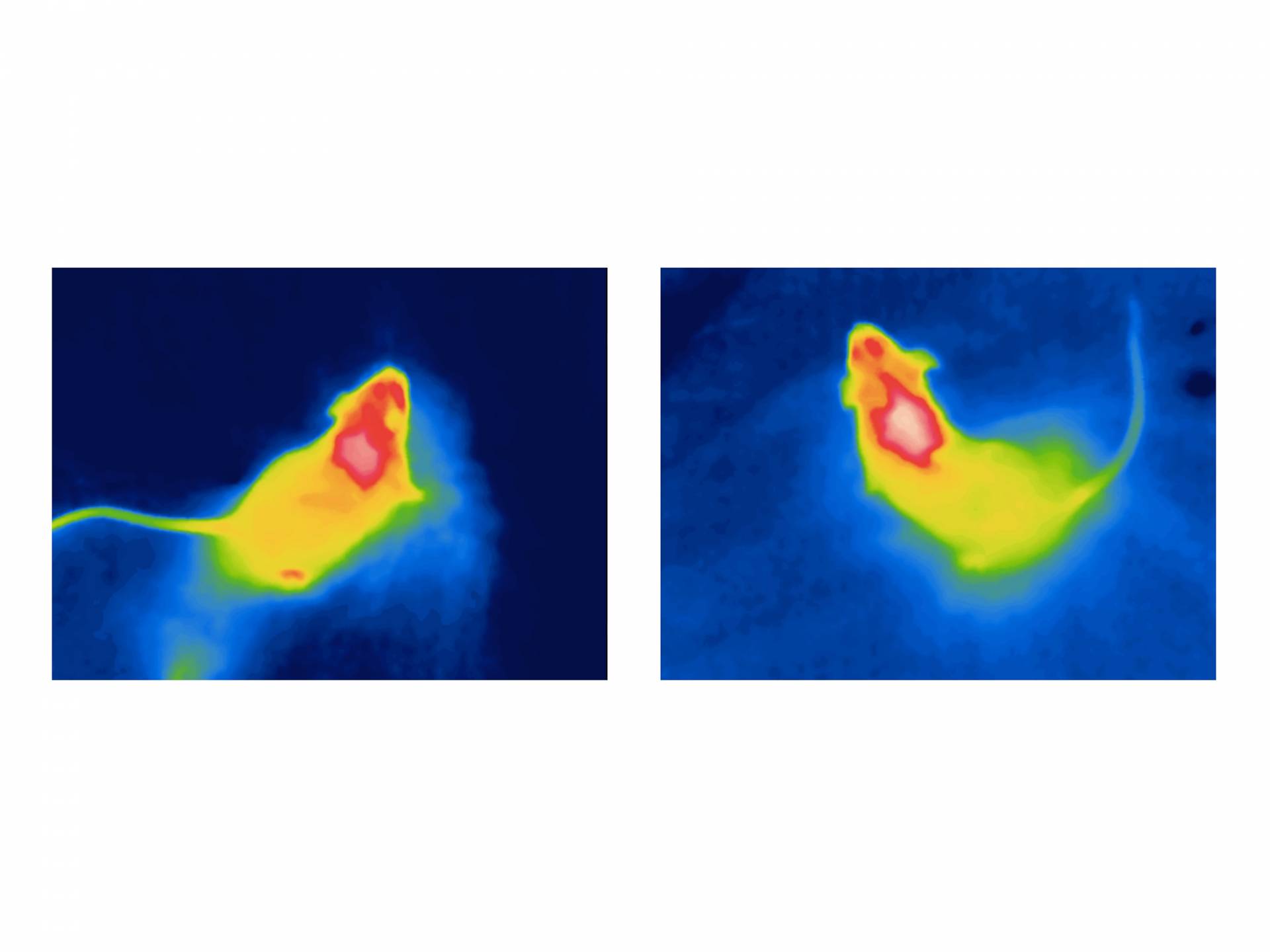 Princeton researchers found that brain cells known to regulate hunger also control energy expenditure. As our body weight depends both on the calories we consume and the energy we burn, their findings could lead to a new type of weight-loss medication that acts on both sides of the energy equation. This image from a heat-sensitive camera shows the temperature of brown fat, a special form of fat tissue that is burned to produce heat directly in both mice and humans. The researchers turned temperature-sensitive neurons on and off, and they discovered that activating the neurons cooled the animals’ brown fat and lowered their core body temperature, while suppressing the neurons amped up heat production — and made the animals less hungry.

Effective weight-loss strategies call for eating less food, burning more calories — or ideally, both. But for the more than 90 million Americans who suffer from obesity, a disease that contributes to conditions ranging from heart disease to cancer, behavioral change is hard to accomplish or not effective enough, which is why scientists have long sought drugs that would help people shed pounds. Yet effective, long-lasting treatments have thus far eluded them.

In a report published June 27 in the journal Cell, a Princeton-led team of researchers propose a new avenue in the search for anti-obesity drugs. The team found that a group of brain cells previously shown to regulate hunger also controls energy expenditure. And since our body weight depends both on the calories we consume and the energy we burn, their findings could lead to a new type of weight-loss medication that acts on both sides of the energy equation, said Alexander Nectow, a visiting associate research scholar in the Princeton Neuroscience Institute and senior author on the new paper.

"The discovery that these neurons can be modulated to decrease hunger and increase energy expenditure points to their potential of being novel targets for drug development against obesity,” said Tania Das Banerjee, a research specialist in PNI who was one of the co-first-authors on the paper.

“Obesity is a major risk factor for cardiovascular disease and Type 2 diabetes,” Nectow said. “Given that over two-thirds of Americans are currently overweight or obese, this is a critical clinical issue.”

Energy in, energy out

Most obesity research has focused on the biological mechanisms that govern how much we eat. Yet manipulating the neural circuits that control our calorie intake hasn’t led to broadly successful anti-obesity drugs, so the researchers turned their focus to the processes by which we burn energy instead.

Mammals like mice and humans expend energy in many ways, and producing heat is one of the most important. When the ambient temperature drops, we burn more fuel to maintain a steady body temperature; when it rises, we burn less. We even possess a special form of fat tissue, known as brown fat, that is burned to produce heat directly.

Scientists knew that some populations of temperature-sensitive neurons in the hypothalamus region of the brain play a role in regulating heat production and, therefore, energy expenditure. But they did not know exactly how those neurons exerted their influence, or if other cells outside the hypothalamus might play a similar role.

The researchers began by mapping the brain regions activated by a rise in ambient temperature. They used an advanced 3D-imaging technique (iDISCO) to scan the brains of mice exposed to hot temperatures, looking for signs of neuronal activity.

As expected, the team saw activity in the hypothalamus. But they also saw activity among a particular group of neurons in a part of the brainstem known as the dorsal raphe nucleus — and, to the researchers’ surprise, these happened to be the very same neurons that, just two years earlier, the lab had found to be crucial for controlling hunger.

“Our new findings demonstrate that these neurons regulate energy balance through control of both feeding and energy expenditure, and that this is mediated by partially overlapping circuit mechanisms,” Nectow said.

The possibility that these cells, which the lab had previously dubbed “hunger neurons,” might regulate both appetite and energy expenditure raised the prospect that they could serve as powerful levers for managing body weight.

“We were very excited,” recalled Marc Schneeberger Pané, a postdoctoral fellow working in Jeffrey Friedman’s lab at Rockefeller University and another co-first-author. The researchers view these multitalented neurons as “a new horizon in obesity research,” he said.

The researchers used sophisticated biochemical techniques to alternately turn these temperature-sensitive brainstem neurons on and off. They discovered that activating the neurons reduced the temperature of the animals’ brown fat, which is burned to generate heat, and lowered their core body temperature as well. Suppressing the neurons, meanwhile, amped up heat production — and, as the scientists had shown previously, it also made the animals less hungry.

But generating heat by burning brown fat isn’t the only way to expend energy. Physical activity burns calories too, as do all the basic tasks that keep the body alive: breathing, digesting food and so on. So the researchers put the mice in special cages tricked out with sensors to track their movements, gauge how much carbon dioxide they produce, and monitor how much food, water and oxygen they consume. The goal was to see if the temperature-sensitive hunger neurons in the dorsal raphe nucleus could control energy expenditure not only by regulating temperature, but by other means as well.

Again, the results were clear: just as activating the neurons caused heat production to plummet, so too did it cause movement, metabolic activity and overall energy expenditure to nosedive. Suppressing the neurons, on the other hand, caused all of them to rise.

The team has already begun searching for unique receptors in these dual-purpose neurons that govern both hunger and energy expenditure. The idea is to identify targets that can be used to create novel anti-obesity drugs capable of delivering a one-two punch.

“When you inhibit these neurons, they suppress food intake and increase energy expenditure at the same time,” Schneeberger Pané said. Figuring out how to quiet them in people could enable a doubly effective assault against a massive public health problem.

Katherine Fenz of The Rockefeller University and Liz Fuller-Wright of Princeton University contributed to this report.