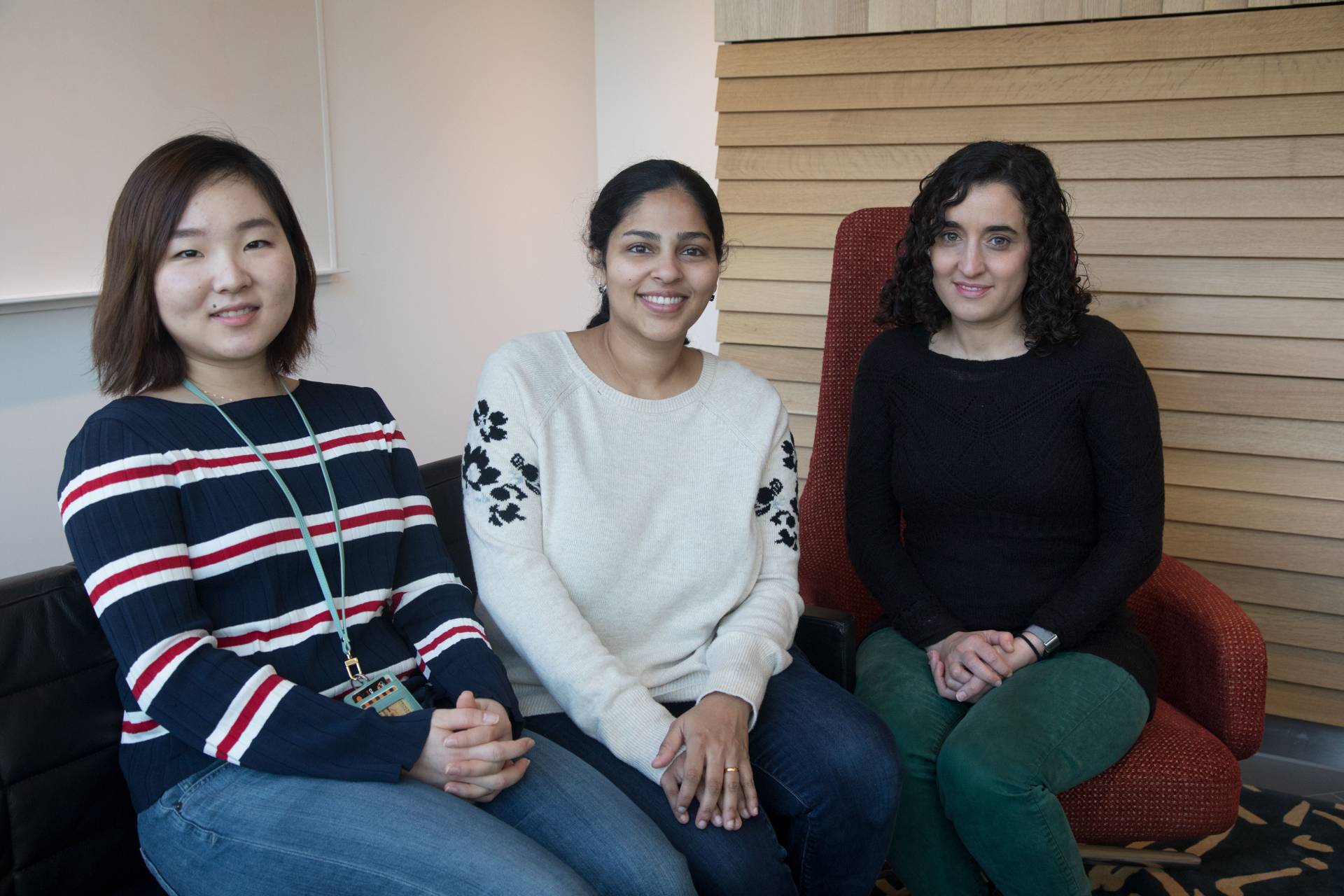 From left: HeeJae Jang, Malavika Murugan, Ilana Witten and their colleagues have identified a neural substrate for social learning in mice, with possible relevance to disorders like autism.

Ilana Witten didn’t set out to study spatial learning. She thought she was investigating how mice socialize — but she discovered that in mouse brains, the social and the spatial are inextricably linked.

“The data had to be screaming at us for a while before we realized what was really going on,” said Witten, an assistant professor of psychology and the Princeton Neuroscience Institute (PNI). “I think it’s pretty exciting, because it’s a different way to think about how the prefrontal cortex is contributing to social behavior.” In addition, she said, the data suggest new avenues of treatment for disorders that have social behavior deficits, from autism to schizophrenia or dementia.

“This research could help us understand autism better,” said Malavika Murugan, a PNI postdoctoral research fellow and the lead author on their Dec. 14 paper in the journal Cell.

Most previous research on social behavior has focused on the brain’s circuits for hardwired behaviors, like aggression, sex, or mothering. Finding a neural substrate for social learning provides a different perspective into social behavior, with possible relevance to disorders such as autism, which are thought to involve abnormalities in the same brain circuitry studied in this work.

In the future, the researchers are interested in examining how the neural substrates of social and spatial learning differ in mouse models of autism. This may shed light on the question of whether autism stems from physical causes or deficits in social learning.

“It’s pretty exciting to see a mechanism that supports a simple form of learning about something as cool as social behavior,” Witten said. “Learning is a process of changing. Learning means that the circuit can change over time … that there could be more hope to find behavioral or other types of interventions.”

When mice socialize in non-aggressive, non-sexual situations, they often begin by sniffing each other, as seen here, before moving on to grooming behaviors.

Witten and her colleagues “are taking the best possible approach to this question by delving deep into the fundamentals of circuity that encodes and modulates social interaction,” said Karl Deisseroth, the D.H. Chen Professor of Bioengineering and of Psychiatry and Behavioral Sciences at Stanford University, who is also an investigator with the Howard Hughes Medical Institute. “New basic understanding of social circuitry is welcome, since our ability to treat disordered social/communication function (as seen in autism, for example) is severely limited."

In their experiments, Witten and her team gave two mice a chance to socialize in a cage that limited the mobility of one of the mice (the “social target”), so the test mouse could choose whether or not to go to the target for friendly behaviors like sniffing and grooming. Later, the test mouse was reintroduced to the test cage. When the researchers used optogenetics, a biological technique which involves the use of light to control neurons, to inhibit the key social-spatial pathway they had identified in the brain, the test mouse wandered freely through the space. When they didn’t inhibit that circuit, the test mouse preferred to spend time where it remembered socializing with the other mouse.

In other words, the test mouse had learned where the fun hangout spot was, and chose to return. Humans engage in this sort of social-spatial association all the time, Witten noted, whether it’s visiting the hottest new club or returning to a mall, a coffee shop, a park, or another spot where we remember spending quality time with friends.

When the “cool kids” turn an otherwise dull spot into an exciting social destination, that’s a real-life example of what Witten observed with her mice: “The social target can change the value of a location,” she said.

Like mice, humans spend the majority of our time on social interactions, Witten said.

“Social interactions are some of the most rewarding interactions that mammals have,” she said. “They drive all sorts of different forms of learning, the simplest being what we found here: spatial learning, contextual learning.”

Witten and her research team performed optogenetic experiments with the mice to isolate precisely which circuits of the brain are involved in social-spatial learning. Previous research had identified that the prelimbic cortex, part of the prefrontal cortex, has three “downstream” channels into the nucleus accumbens, the amygdala, and the ventral tegmental area. Witten’s team determined that only the pathway between the prefrontal cortex and the nucleus accumbens is linked to the social-spatial learning they observed.

Some key discoveries were made by the undergraduate researchers who make up four of the paper’s 13 co-authors, Witten said: Varun Bhave, Class of 2019; HeeJae Jang, Class of 2017; Michelle Park, Class of 2016; and Josh Taliaferro, Class of 2015.

“Ilana really takes care and time to mentor undergraduates regardless of their academic background,” said Jang.

Jang, who concentrated in physics, joined Witten’s lab in her junior year. “At that time, I had not taken a single neuroscience class, but Ilana very generously gave me an opportunity,” she said.

Jang did her senior thesis with Witten, and after two years of nights and weekends in the lab, she chose to continue as a research specialist in Witten’s lab after graduation, while she prepares for medical school. “I highly recommend the Witten lab to undergrads and senior thesis writers,” Jang said.

This work at Princeton was funded by Pew, McKnight and Sloan Foundation grants to Witten; the National Institute of Health (DP2 DA035149-01 and 5R01MH106689-02 to Witten and 1F32MH112320-01A1 to Julia Cox, a postdoctoral research fellow in PNI); a Simons Collaboration on the Global Brain Postdoctoral Fellowship to Murugan; a National Science Foundation Graduate Research Fellowship Program grant to Nathan Parker, a graduate student in PNI); and National Alliance for Research on Schizophrenia and Depression Young Investigator Awards from the Brain & Behavior Research Foundation to Witten and Alexander Nectow, a visiting associate research scholar in PNI. Witten is also a New York Stem Cell Foundation—Robertson Investigator.