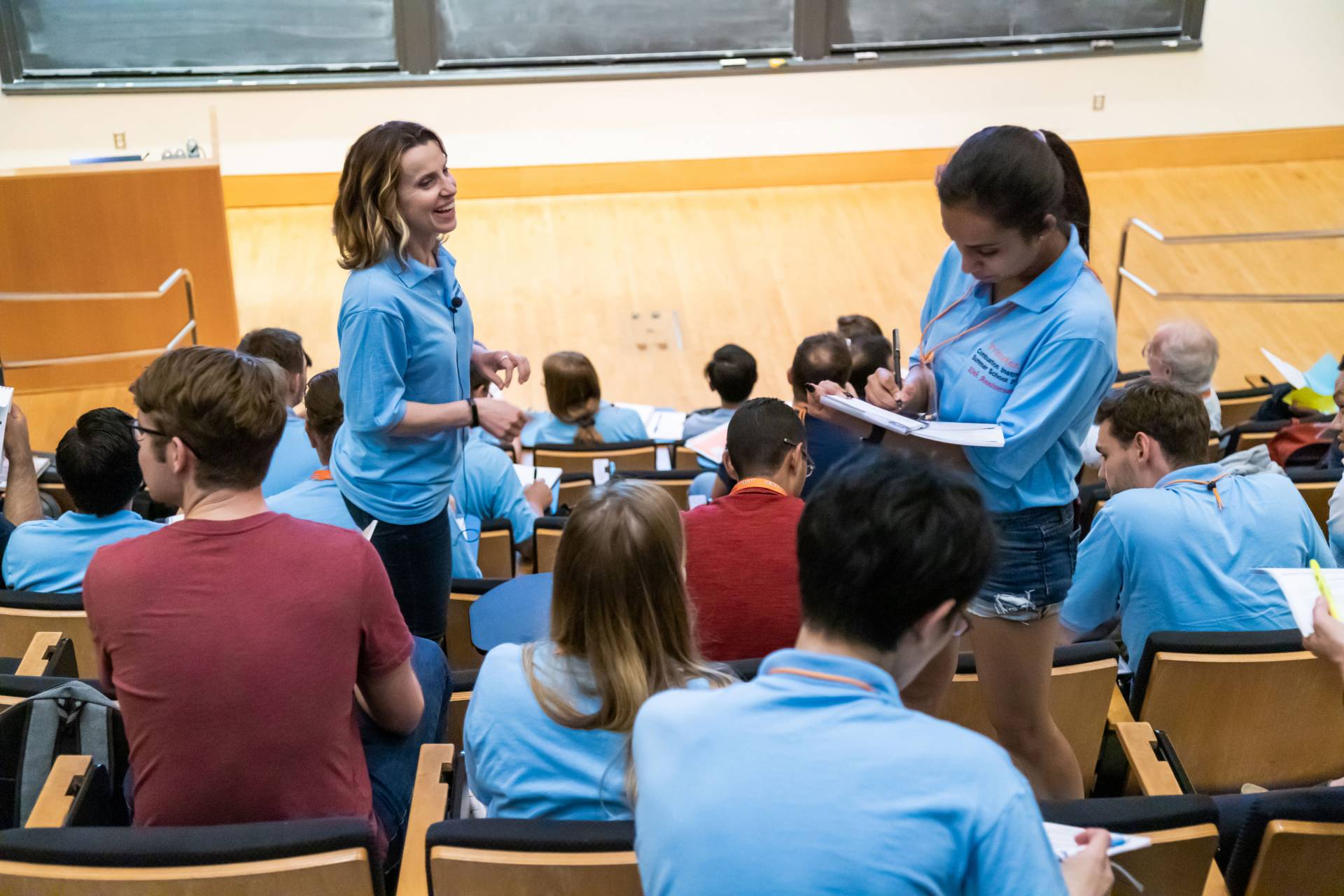 The Princeton-Combustion Institute Summer School on Combustion is an intensive weeklong program that brings together top combustion scientists to teach graduate students and postdoctoral researchers from around the world. Shown: Angela Violi (standing, left), a professor at the University of Michigan, works with students during a course on numerical combustion, an overview of computational methods for studying how molecules change during combustion.

From gas stoves to rocket ships, everyday conveniences and cutting-edge technologies depend on burning fuels. Underlying these processes is the complex science of combustion, which combines chemistry, fluid mechanics and other areas that can be challenging for researchers to integrate.

For the last decade, Chung Law has been forging a pathway to improve young scientists’ training in combustion science. Each summer since 2010, Law, Princeton’s Robert H. Goddard Professor of Mechanical and Aerospace Engineering, has led the Princeton-Combustion Institute Summer School on Combustion, an intensive weeklong program that brings together top combustion scientists to teach graduate students and postdoctoral researchers from around the world. Combined with a sister program that Law also leads in China, the summer schools have helped advance the careers of more than 4,700 students.

“One of the roles the summer school plays is to bring the community together from an early age — to have graduate students come together and meet each other from all around the country, and in some cases all around the world,” said Jacqueline O’Connor, who attended the inaugural summer school in 2010 and is now an associate professor at Penn State University. 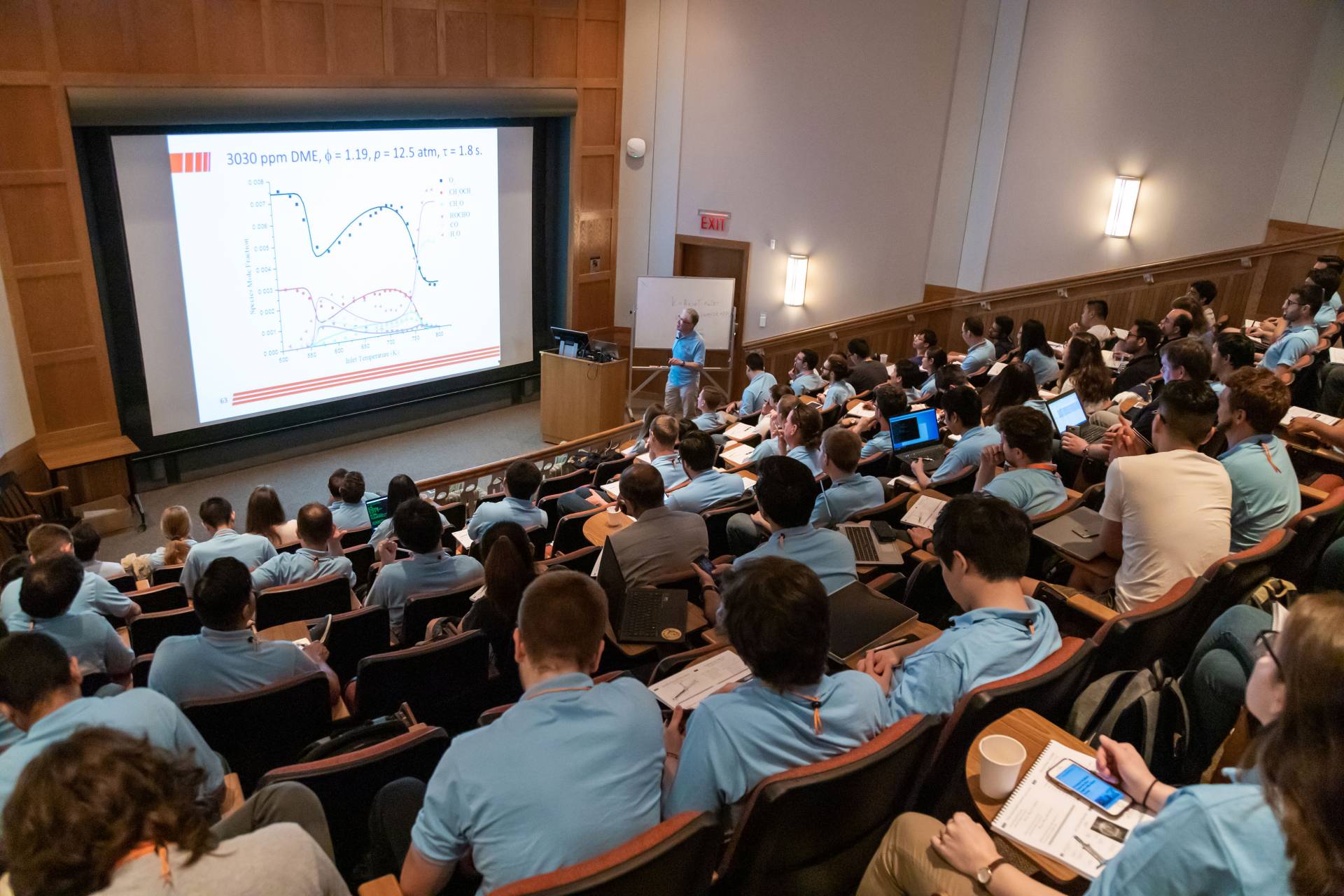 Students at the Princeton-Combustion Institute Summer School on Combustion listen to a lecture on combustion chemistry and modeling by Henry Curran, a professor at the National University of Ireland-Galway.

This year’s program, held from June 23-28, brought 175 young scientists to Princeton for a week of courses on the fundamentals and frontiers of combustion, and a chance to meet leading researchers in an intimate setting. The courses offer an opportunity for students to reach across the boundaries of chemistry and fluid mechanics to explore more general problems of combustion.

“Combustion science is complicated because it deals with many disciplines,” said lecturer Sébastien Candel, an emeritus professor at the University of Paris-Saclay and former president of the French Academy of Sciences. “It combines the corresponding difficulties and adds some new ones.”

For the school’s morning session, students choose one of two core courses: “Combustion Dynamics,” which deals with the behavior of flames and fuels in changing environments, and “Combustion Chemistry and Modeling,” which covers approaches for studying the oxidation reactions and heat transfer that occur when fuels are burned.

Students whose research is focused on combustion dynamics may opt to take the course on chemistry and modeling, and vice versa — this helps round out their knowledge of the field, said Law. Lecturers are selected on a rotating basis, which gives even the recurring courses a different flavor each year and encourages students to return.

Afternoon course topics change from year to year. This summer’s offerings included “Numerical Combustion,” a survey of modeling and computational techniques; as well as courses on laser diagnostics and fire safety applications. Law said that seeing the destruction wrought by the 2018 California wildfires prompted him to include a course on fire safety for the first time.

“We bring students to the problems that are known, we give them an idea of what has been the progress in our field, and bring them up to speed on the edge of research,” said Jacqueline Chen, a lecturer for the course on numerical combustion and a senior scientist at Sandia National Laboratories’ Combustion Research Facility.

Brendan McGann, a graduate student at the University of Illinois Urbana-Champaign who attended this year’s school, said he appreciated the change of pace from his own research work, a chance to gain skills and explore new topics in combustion science. He took a course on laser diagnostics, which explored methods for using lasers to measure the movement, temperature and chemical makeup of fuels and flames during combustion.

The lecturer, Jeffrey Sutton of Ohio State University, is “a real expert in the field,” said McGann. “It’s interesting to hear him go over the difficulties of experimental techniques, and to see techniques you don’t use every day.”

In 2012 Law established an annual summer school at Tsinghua University in Beijing, where he directs the Center for Combustion Energy. The Tsinghua-Princeton-Combustion Institute Summer School on Combustion hosts nearly 400 students each year from throughout Asia and Australia, and several lecturers have taught at both the Princeton and Tsinghua schools. The Combustion Institute has also built on the success of this model by sponsoring similar summer schools in countries including Saudi Arabia, Sweden and Brazil.

Law makes a point of fostering a comfortable, convivial atmosphere. All the attendees receive a Combustion Summer School shirt, which is a different color each year — this gives a uniform look to group photos and, more importantly, allows researchers to easily “find their buddies” at conferences for years to come, said Law.

“I made a lot of friends [at the summer school] who are now close colleagues and collaborators, and I would not have known these people except for the summer school because our areas of research really didn’t overlap at the time,” said Penn State’s O’Connor, who has sent five graduate students from her research group to the school in recent years. “We’ve stayed friends all these years, and now we’re trying to do big things together.” 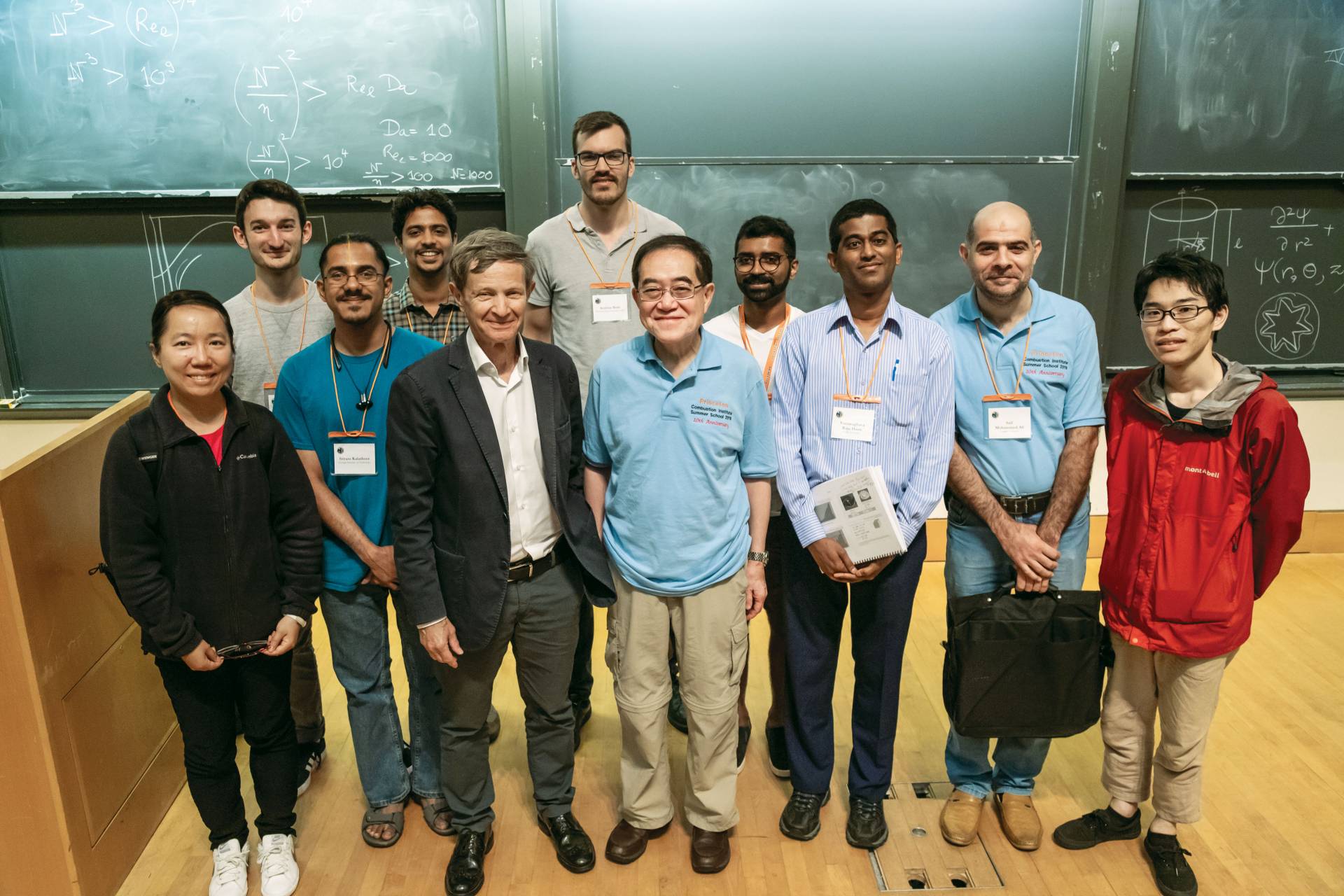 In addition to courses and group meals, the school offers students a tour of Princeton’s laboratory facilities, and includes a career discussion with panelists from universities, industry and government laboratories. Ashwini Karmarkar, a first-year graduate student from O’Connor’s group, said she found it especially helpful to hear from professors who took unexpected paths to their current positions. “I would like to pursue academia as an option, so that makes me feel a lot more comfortable,” she said.

“I think this is one of the most important instruments to bring along the next generation of combustion scientists and engineers, who hopefully will help solve global issues with energy security and climate and sustainability and pollution,” said Chen.

Law said he is impressed every year that young researchers travel long distances to attend the school he created. “Their thirst and desire to learn — that’s just very moving,” he said.

The first five years of the Combustion Summer School were supported by Princeton’s Combustion Energy Frontier Research Center, one of 46 centers launched in 2009 by the U.S. Department of Energy. Since 2015 the school has been sponsored by the Combustion Institute, an international scientific society, as well as the National Science Foundation and the U.S. Army Research Office. University support comes from the Office of the Dean for Research, the Andlinger Center for Energy and the Environment, the Department of Mechanical and Aerospace Engineering, and the Princeton Institute for the Science and Technology of Materials.