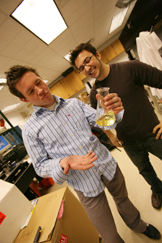 Nate Lowery (left) holds a beaker of biodiesel fuel that he and Sebastien Douville produced as part of their senior project. The two have founded a company based on their work.

When they met as freshmen, Nate Lowery and Sebastien Douville, both mechanical and aerospace engineering majors, soon discovered they shared an interest in alternative energies. They never dreamed, however, that by the time they were seniors they would not only have invented a new way to produce an alternative fuel but also would be launching a company based on their idea.

Douville and Lowery have invented a more efficient way to produce biodiesel, a plant-based fuel that has been around since the 19th century but was eclipsed by oil around the turn of the century.

Now biodiesel is back, with the federal government instituting tax incentives last year to spur innovation and development. Biodiesel gives off less soot and less greenhouse gas than oil-based diesel, and it can be produced domestically from renewable resources.

“We’re hitting this at a time when the field is exploding,” said Lowery.

Lowery and Douville’s invention is the basis of both their senior independent work and their company, Axios Energy LLC.

The seniors currently are making their biodiesel from 100 percent soybean oil, converting it to combustible fuel through a chemical process that involves mixing it with alcohol.

Biodiesel can be substituted easily for oil-derived diesel, the two seniors said.

“What makes this so exciting is that it is not a disruptive technology,” said Lowery. “The infrastructure is already there. It has the same performance standards as regular diesel but it is a much cleaner fuel.”

With the help of John Ritter at the University’s Office of Technology Licensing, Lowery and Douville have filed for a provisional patent. The two praised Ritter for his support and also gave enormous credit to their adviser, assistant professor Craig Arnold. “He is the most amazing professor,” said Lowery. “He has been supportive at every turn.”

Arnold said that the project has been student-driven since the beginning. The two came to him at the end of the last school year to talk about senior project ideas. They professed a general interest in an energy-related topic that would be environmentally responsible and might benefit people around the world.

Out of several ideas, the pair found biodiesel production the most captivating. “They really ran with the idea,” said Arnold. “They did a huge amount of research, not only in engineering, but also on the business side.” He underwrote their expenses to attend a biodiesel conference in California, where Douville and Lowery furthered their knowledge while making important contacts in industry and finance.

While manufacturing biodiesel involves a lot of chemistry, the important challenges behind producing it economically involve many concepts from mechanical engineering such as fluid mechanics and materials science, Arnold said. “It is a very nice project from a mechanical engineering perspective. They are actually using the knowledge they acquired over the past four years and applying it.”

Lowery said that he and Douville have invented a new way to mix the ingredients that go into making biodiesel. “The constituents for making biodiesel are like oil and water — they don’t like to mix naturally,” he said.

By this spring, the partners said they were in the process of securing $1.5 million in funding for Axios Energy. In a second step, they hope to raise $30 million more to open a manufacturing plant in the New York/New Jersey port area that they say would be one of the five largest in the country. “One of the venture capitalists who read their business plan told me it was one of the best he had ever seen,” Arnold said.

He said that the seniors were doing real-life engineering, which involves science, business and engineering. “They are using all of those skills. But I have been encouraging them to focus on the science for now,” Arnold said. “You can’t submit a business plan for your senior thesis.”

Douville said that he equivocated about taking the risk of starting a new company and was thinking about taking a day job to give him financial security while he worked on the side to develop the business. In December he was offered a job after graduation working for a consulting firm and was planning to accept. But then he went to the final lecture in Ed Zschau’s course “High-Tech Entrepreneurship.” “It was an incredibly inspiring speech,” Douville said. “I called the consulting company that afternoon and told them I didn’t want the job. Even if we go down in flames, this will be the best experience of my life.”

Arnold cautions that any entrepreneurial venture is risky. “There are no slam-dunks,” he said. On the other hand, he said, “If it is possible to do it, these guys will make it happen.”