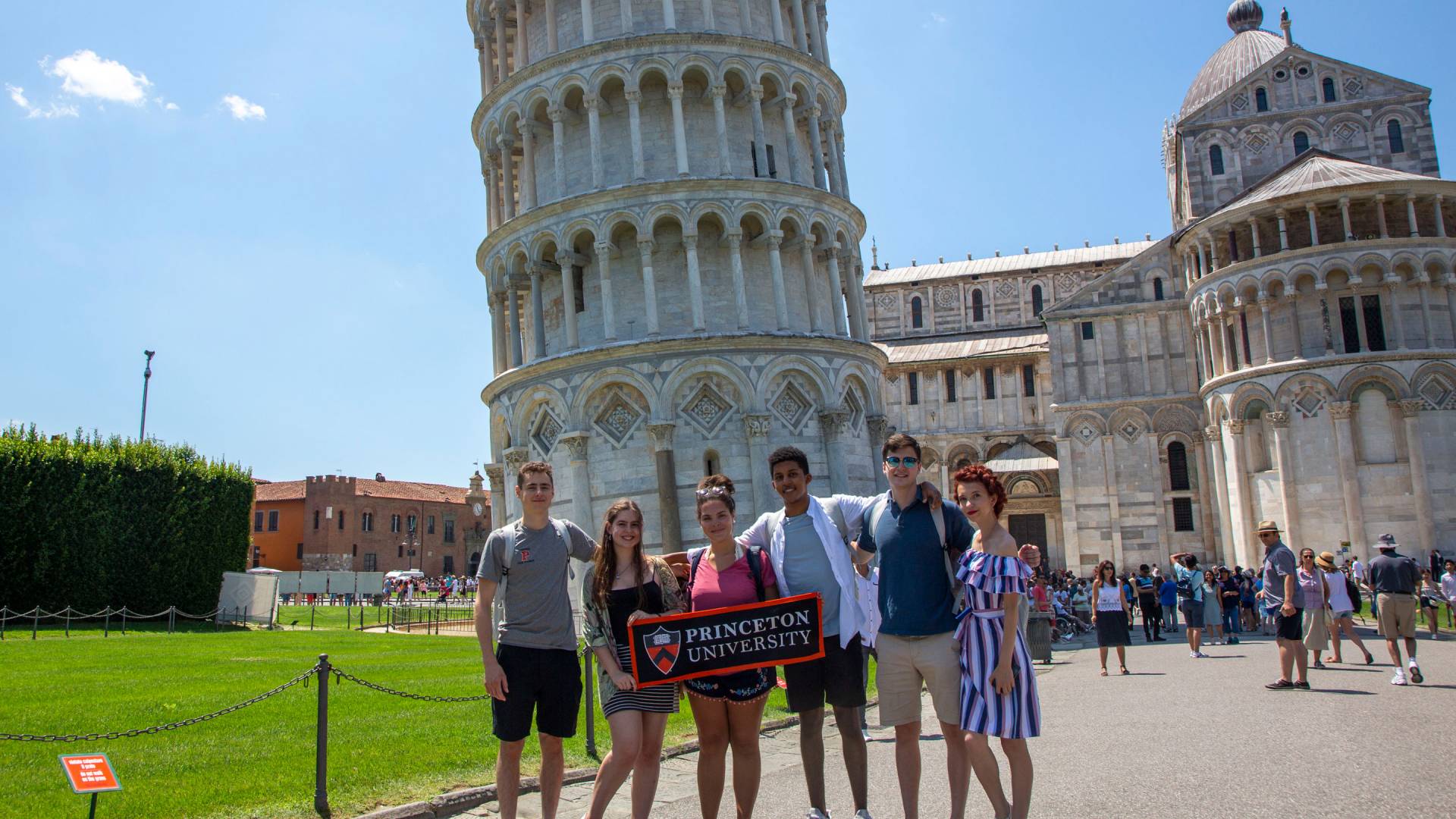 In the inaugural year of Princeton’s language immersion program in Pisa, students explored themes of Italian culture while honing their Italian language skills. From left to right: Benjamin Fasciano, Class of 2021; Mika Hyman, Class of 2022; Abby Clark, Class of 2021; Joshua Haile, Gabe Lebeau and Polina Zhilkina, all Class of 2022, pose for a photo in front of Pisa’s iconic Leaning Tower.

This past summer, six Princeton students from different academic backgrounds embarked on the inaugural year of the language immersion program in Pisa, Italy. For four weeks, students explored various themes, ultimately improving their Italian language proficiency while simultaneously gaining a deeper understanding of the country’s rich and diverse cultural heritage.

When most people think of Pisa, their first — and perhaps only association — is of the city’s iconic leaning tower. And while the tower and its neighboring 12th-century buildings in the “Campo dei Miracoli,” or Field of Miracles, remain the focal point of Pisa, they are just a few of the many reasons that Anna Cellinese, director of the Italian language program and senior lecturer in French and Italian, chose Pisa as the location for Princeton’s Italian language immersion program.

Located in central-western Tuscany on the banks of the Arno River, Pisa has long been an important city in Italian history as a maritime republic and university town. It was also the home of Galileo Galilei, the Italian scientist who attended and taught at the University of Pisa and famously used the Leaning Tower as his laboratory, dropping objects from the top to determine that items of different masses fall at the same speed.

Today’s Pisa also allows students to explore issues of contemporary culture as the city is the headquarters of Italian political parties and is a community that works closely with immigrants who have come to Italy from Africa.

Each week, the course engaged with a different theme: landscape, beauty, migration and travel. “These themes represent the receptacle of Italian tradition, values and history, offering a contemporary look of the world and an approach to the concept of ‘otherness,’” said Cellinese. “Each theme takes students into a journey of discovery of the self in relation to the colorful mosaic that is Italian literature and culture.”

While the group’s in-class discussions on these themes were an important component of the program, Cellinese designed the course to be as culturally immersive as possible through hands-on activities in Pisa and trips to nearby cities Florence, Siena, Lucca and Carrara.

Studying at the Scuola Normale Superiore

Perhaps the most immersive aspect of the Program in Pisa is that students are housed in residence at the Scuola Normale Superiore, one of Italy’s most prestigious universities. In addition to attending seminars in the Scuola’s historic 16th-century main building, the “Palazza della Carovana,” they also lived in a dormitory and ate meals alongside their Italian counterparts.

“The students at Scuola Normale Superiore were really friendly; it was great spending time with both Princeton students and students at the Scuola,” said sophomore Gabe Lebeau, a sophomore who is planning to concentrate in philosophy or computer science.

Princeton students also spent their afternoons with Veronica Andreani, a research fellow at the Scuola Normale who taught a seminar on the course’s four themes through a perspective of literary analysis.

“When I found out we would be studying at the Scuola Normale, I didn’t realize what it would mean being able to study in that environment with one of their faculty members,” said sophomore Mika Hyman. “It was incredibly special to be invited into another scholastic community and learn from it. Watching the ways in which [Cellinese] and [Andreani] worked together to guide our learning was a powerful cross-cultural experience.”

Experiencing Pisa and beyond

Each week, students were given task-based activities that enabled them to get out of the classroom and into the community, where they spoke to residents and got a firsthand flavor of the local culture. Activities included visiting the headquarters of political parties, meeting with various student organizations, and interviewing young migrants about their experience adjusting to life in Pisa.

Students were also encouraged to spend time exploring. “I enjoyed finding a spot in the city to write about,” said Ben Fasciano, a junior concentrating in economics. “It encouraged me to walk around and explore without looking for anything in particular. I was able to find a quiet alley with a lived-in feeling that I probably never would have stumbled upon otherwise. Pisa gives off a different feeling compared to most American cities and towns; it is very maze-like due to the many alleys and winding cobblestone side streets.”

Hyman agreed: “I loved the times I took to wander around the city, speaking in Italian with locals as I discovered more about how passionate they were regarding Pisa, Italy, their culture and so on.”

Many of these interactions happened organically through living in the center of the vibrant university town. “One thing that surprised me about my experience was how seamlessly I adjusted to Italian life,” said Joshua Haile, a sophomore who plans to concentrate in the Woodrow Wilson School of Public and International Affairs.

“After a little over a week, my blended routine of lecture, coffee, long walks and gelato was almost completely solidified,” added Haile. “One of my favorite parts of the trip was getting acquainted with the people who worked at the local shops and being a regular there. The woman at the counter of the coffee bar knew my order and the owner of the electronics store got to know me after I managed to break my fan, which was arguably my most important belonging during my trip.”

“One thing that surprised me was how alive the city felt at night,” said Fasciano. “During the week the streets would have many people on ‘la passeggiata,’ a relaxed evening walk. On Friday and Saturday nights the streets, piazzas and both sides of the river were filled with people young and old laughing, talking and letting go of the week.”

Through day trips to nearby cities and towns, students got a sense of the similarities and differences between Pisa and its Tuscan neighbors and discovered meaningful connections to their own unique interests and areas of academic study.

Polina Zhilkina, a sophomore concentrating in mechanical and aerospace engineering, said, “My favorite memory was visiting ‘Il Museo Piaggio’ and seeing how the technology of one of the most famous brands in the world developed throughout history. As an engineering and language student, I managed to appreciate both the technical side of the design and the language of the commercials.”

Students created a magazine titled “Il Giornale Pisano” or “The Pisa Newspaper,” an online magazine designed for the course by the McGraw Center for Teaching and Learning, in which they regularly shared their observations.

“The magazine represents a way in which students are able to express their learning through different writing genres — from academic to journalistic and autobiographical to photographic reportage,” said Cellinese. “It represents a laboratory through which students learn how to positively channel their different temperaments and abilities to unpack cultural controversies and create a meaningful product.”

While all of the students came to Pisa to improve their Italian, their experience abroad helped them discover that language cannot be studied in a vacuum, and that understanding a culture contributes to one’s better understanding of the language.

“My biggest takeaway from four weeks in Pisa was definitely the fact that any foreign language has to be studied in conjunction with the culture and history of the country,” said Zhilkina. “This helps to deepen the understanding of the language formation and explains the existence of dialects and different language forms.”

Haile agreed: “I realized how important it is to understand a culture to truly understand a language. This, in my opinion, allows you to truly live the language you're speaking. There are many aspects of typical Italian conversation that aren't typical for conversation for English, so having this exposure grants you an unparalleled level of authenticity.”