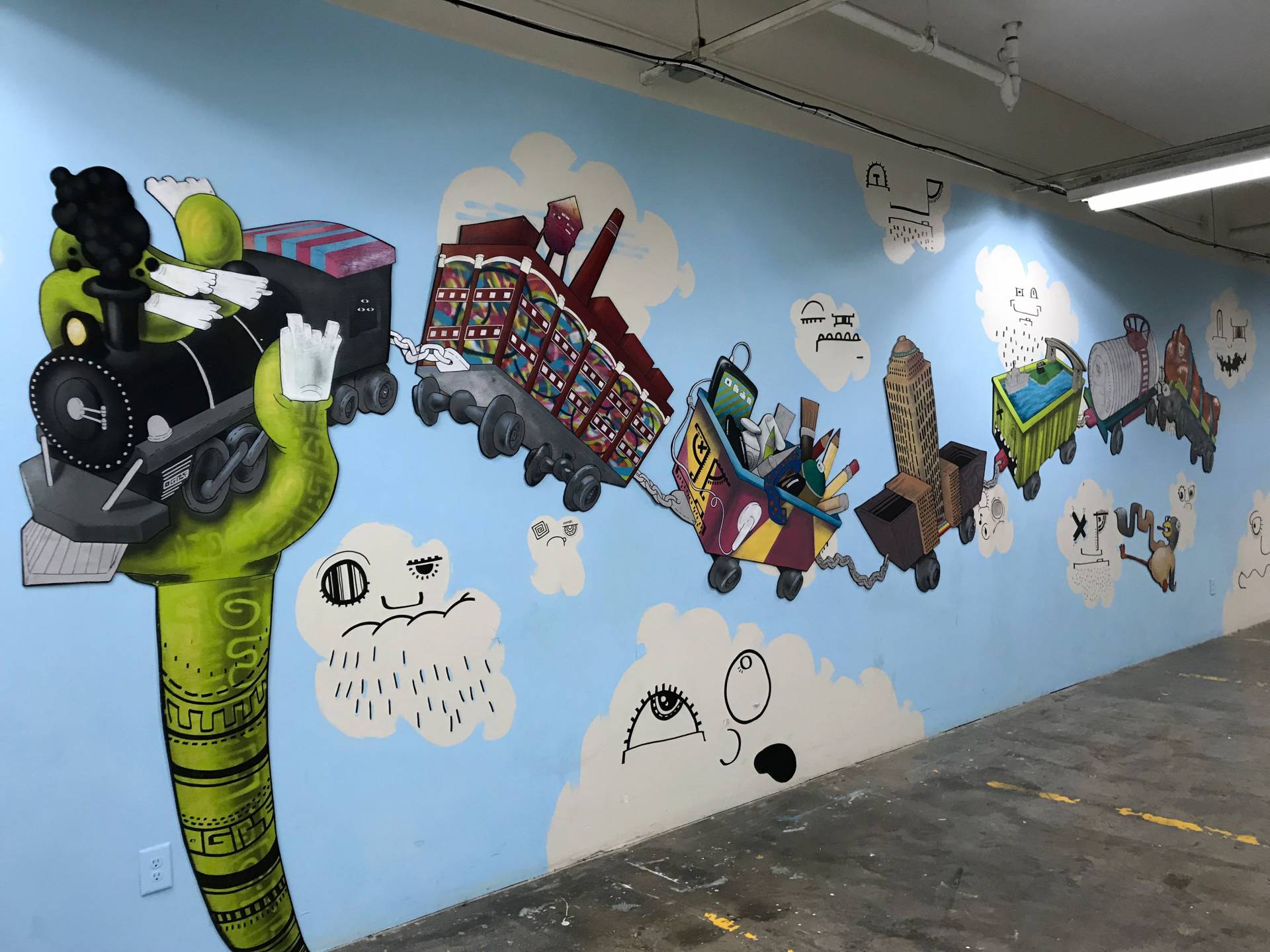 The fall course "The Ethics of Borders and Migration" included a trip to Buffalo, New York, where students learned about the city's refugee resettlement efforts. A mural at Journey’s End Refugee Services depicts some of Buffalo’s iconic landmarks and industries including Buffalo City Hall, Niagara Falls, railroads and Buffalo’s West Side.

As a capstone to the fall course “The Ethics of Borders and Migration,” 11 Princeton undergraduates and one graduate student traveled north to Buffalo, New York, to learn about the city’s refugee resettlement efforts.

The course and long-weekend trip were led by Anna Stilz, the Laurance S. Rockefeller Professor of Politics and the University Center for Human Values, who is also director of the Program in Values and Public Life. Her current research and second book, forthcoming with Oxford University Press, focus on territorial sovereignty, a subject closely related to refugees. Over the past decade, Buffalo has become a major center for refugee resettlement in the Northeast, resettling about 12,000 refugees. Close to the Canadian border, Buffalo is also a destination for asylum seekers from around the world who are trying to press claims in Canada, which processes claims more expeditiously — and often more favorably to refugees — than the United States. 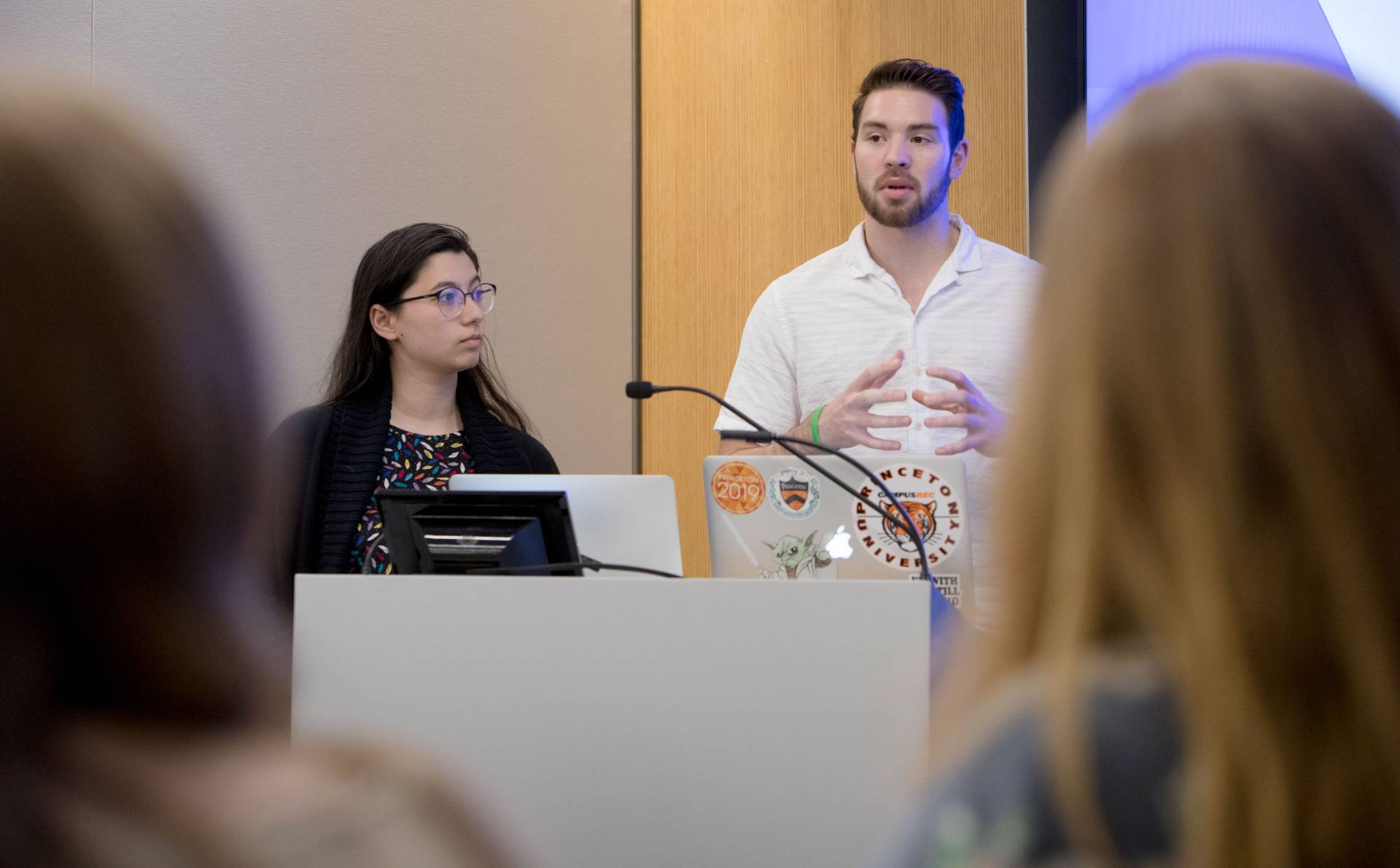 “Refugee” and “asylum seeker” are often conflated in media coverage of emigration, but there is an important distinction: Refugees are required to apply in advance before arriving in the host country. If refugees are approved for resettlement at all, they usually come from a refugee camp, where the average stay is 17 years. Asylum seekers, conversely, present themselves at a country’s border claiming a fear of persecution in their home country, at which point they apply for asylum.

Buffalo’s willingness to resettle refugees and aid asylum seekers made it an ideal destination for students to explore questions central to Stilz’s research and course, and indeed, questions that many countries are wrestling with today: How do we balance the rights of sovereign states and their citizens against the claims of foreigners? Should self-governing peoples be free to set their own migration policies and control their territorial borders without interference? Or ought they instead be constrained by a "human right to immigrate"?

Buffalo is an intriguing case study because it complicates the pervasive view of the refugee-host country relationship as nonreciprocal: Buffalo is helping refugees resettle in the U.S., but refugees are in turn helping to revitalize a declining American manufacturing city that, as a result of deindustrialization, has lost half of its population since the mid-20th century.

“By the early 2000s, economists were saying, ‘Buffalo is a lost cause and it’s just not going to come back,’” Stilz said. “That’s when the refugees started coming.” 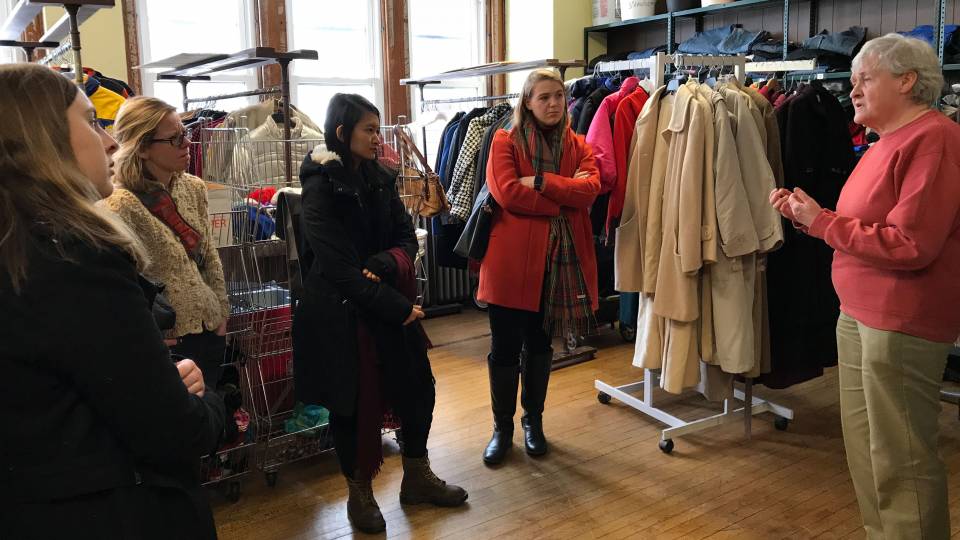 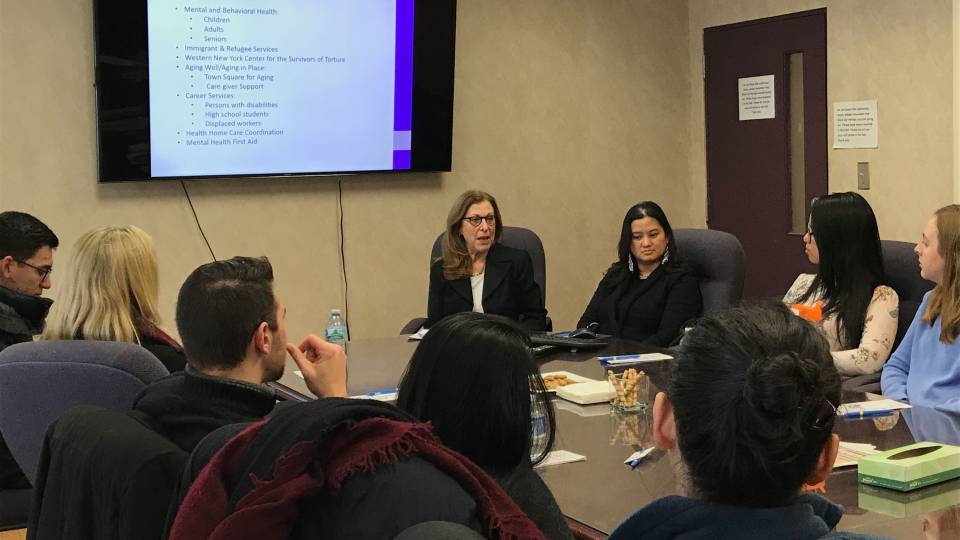 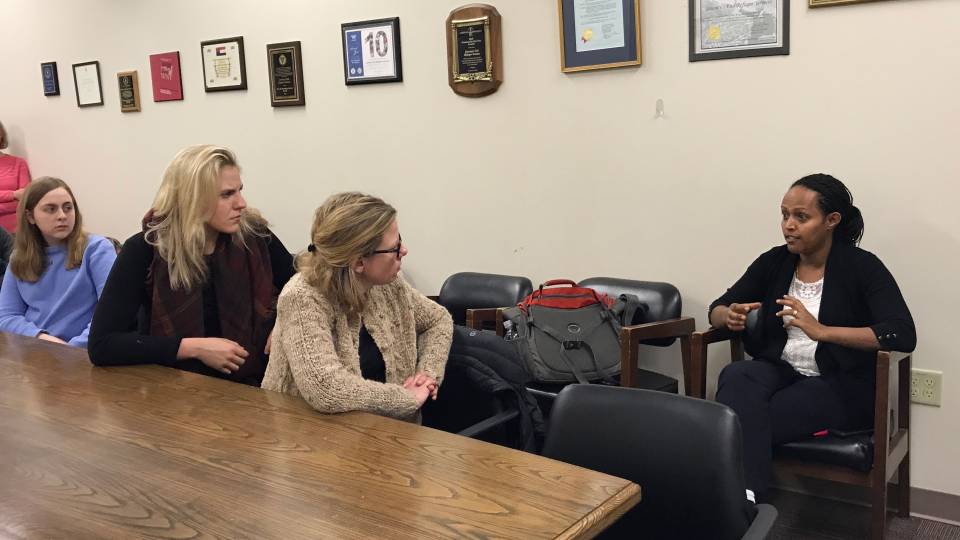 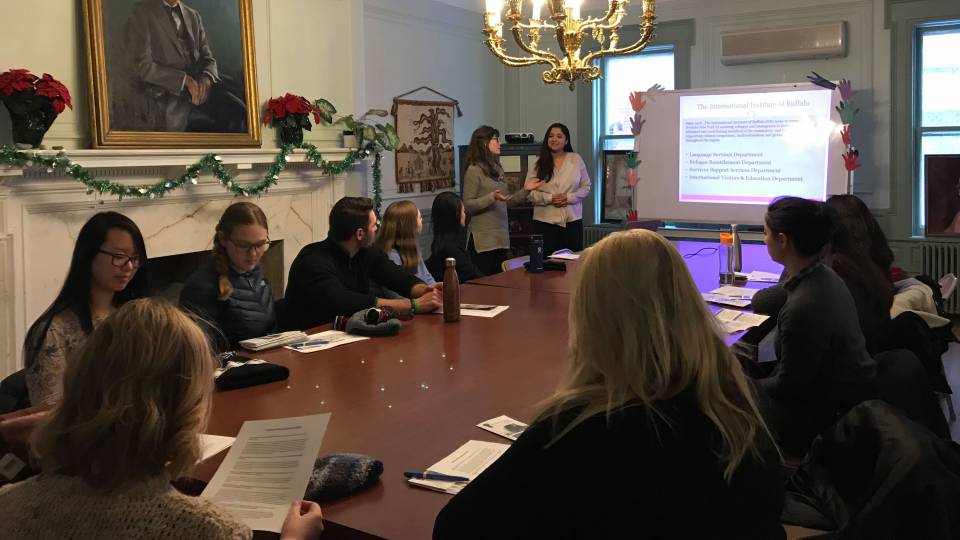 Marlene Schillinger, president and CEO of Jewish Family Service, details what services the resettlement agency offers to its clients.

Hana Mirach, director of resettlement at Journey’s End (right), recounts her story of coming to Buffalo as a refugee and advancing in her career.

At the International Institute of Buffalo, Aliah Hasan and Lisa Zulawski describe the agency’s specialization in human trafficking and domestic violence.

“The most impressive thing to me about the work of the resettlement agencies was the wide range of assistance that they offered,” said senior Camila Novo-Viano. “Beyond providing housing and resettlement assistance, agencies were concerned with helping refugees adapt in the long term by offering mental health and trauma-related services, child care, and English lessons.”

All of the agencies are autonomous, but they work together to ensure refugees get the personalized care they need. “I was surprised to see how closely the agencies cooperated with each other,” said Julia Herrle, a junior. “Each agency had developed a specialization, but they were united in their overall mission and they worked together on a daily basis.” 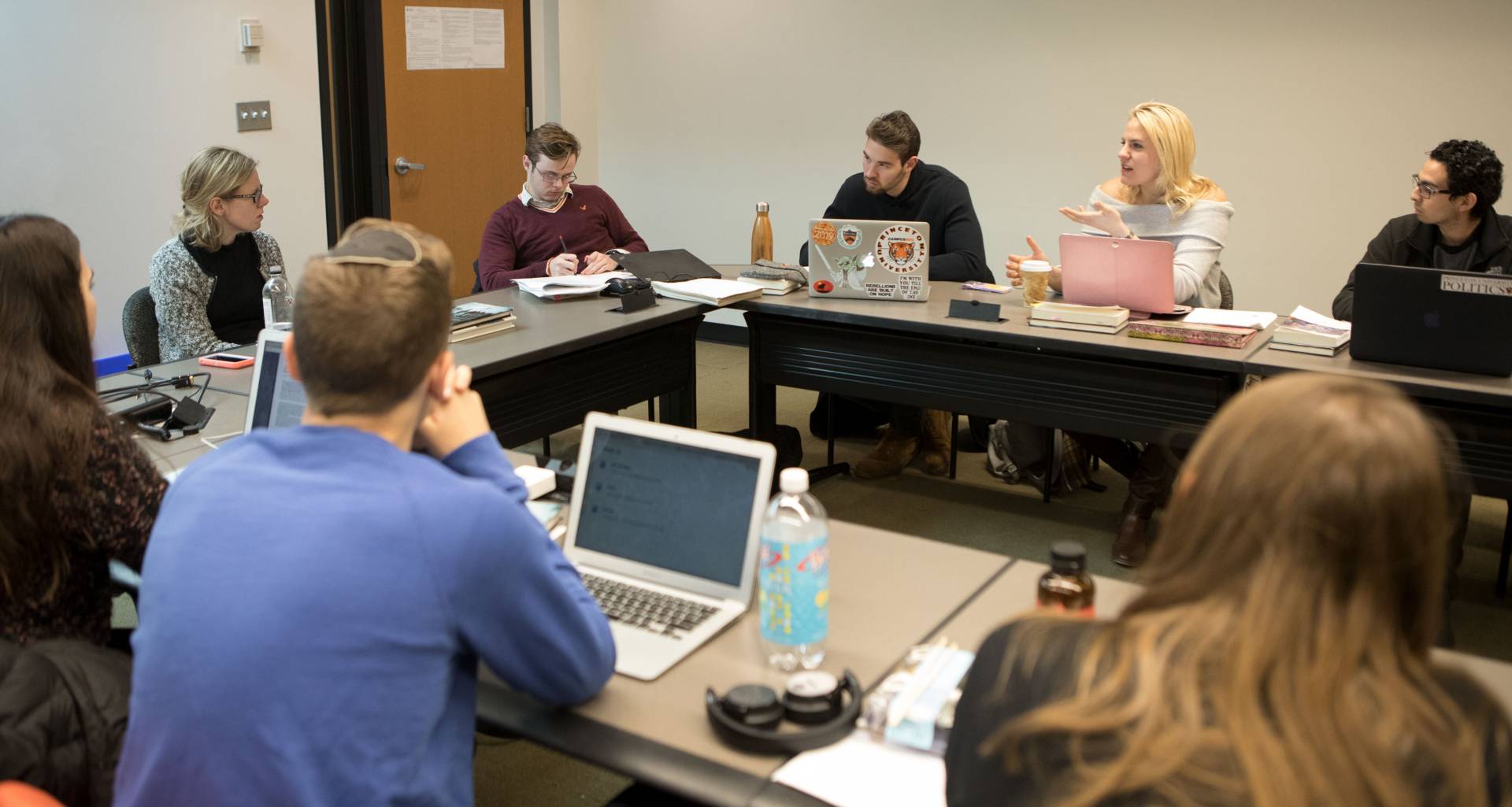 In class, junior Brittany Smith discusses the impact of labor policies on illegal immigrants in the United States.

To support refugees’ personal and career development, Buffalo’s resettlement agencies have forged relationships with local employers, such as Buffalo Wire Works, to help refugees acquire the skills they need to advance in the U.S.

“Refugees often come with a tremendous amount of skills,” said Lisa Zulawski, a Safe Harbor Advocate at the International Institute. One of the barriers resettled refugees face is that their credentials aren’t recognized in the U.S. or they don't have the language skills required to perform skilled jobs.

These local business partnerships help get refugees into the workforce and hone their technical or language skills, with the aim of ultimately finding a job that matches the training and talents they acquired in their home country. “We always want refugees to grow in their jobs,” said Mackenzie Hefner, a community outreach specialist at Journey’s End.

While agencies help refugees make a new life for themselves and their families, the relationship between Buffalo and refugees appears to be symbiotic. All four agencies emphasized the instrumental role refugees have played in revitalizing the city. “Buffalo wouldn’t be on the rise without refugees — they’re a huge economic driver,” said Marlene Schillinger, president and CEO of Jewish Family Service. “We like to call it ‘The Refugee Renaissance.’”

As a result of this “Refugee Renaissance,” some of Buffalo’s most blighted areas have become trendy, vibrant communities. Buffalo’s West Side was once a notoriously dangerous neighborhood where the low cost of housing made it a popular location for refugee resettlement. Today, the West Side is one of downtown Buffalo’s hippest neighborhoods because of the multiculturalism refugees introduced. 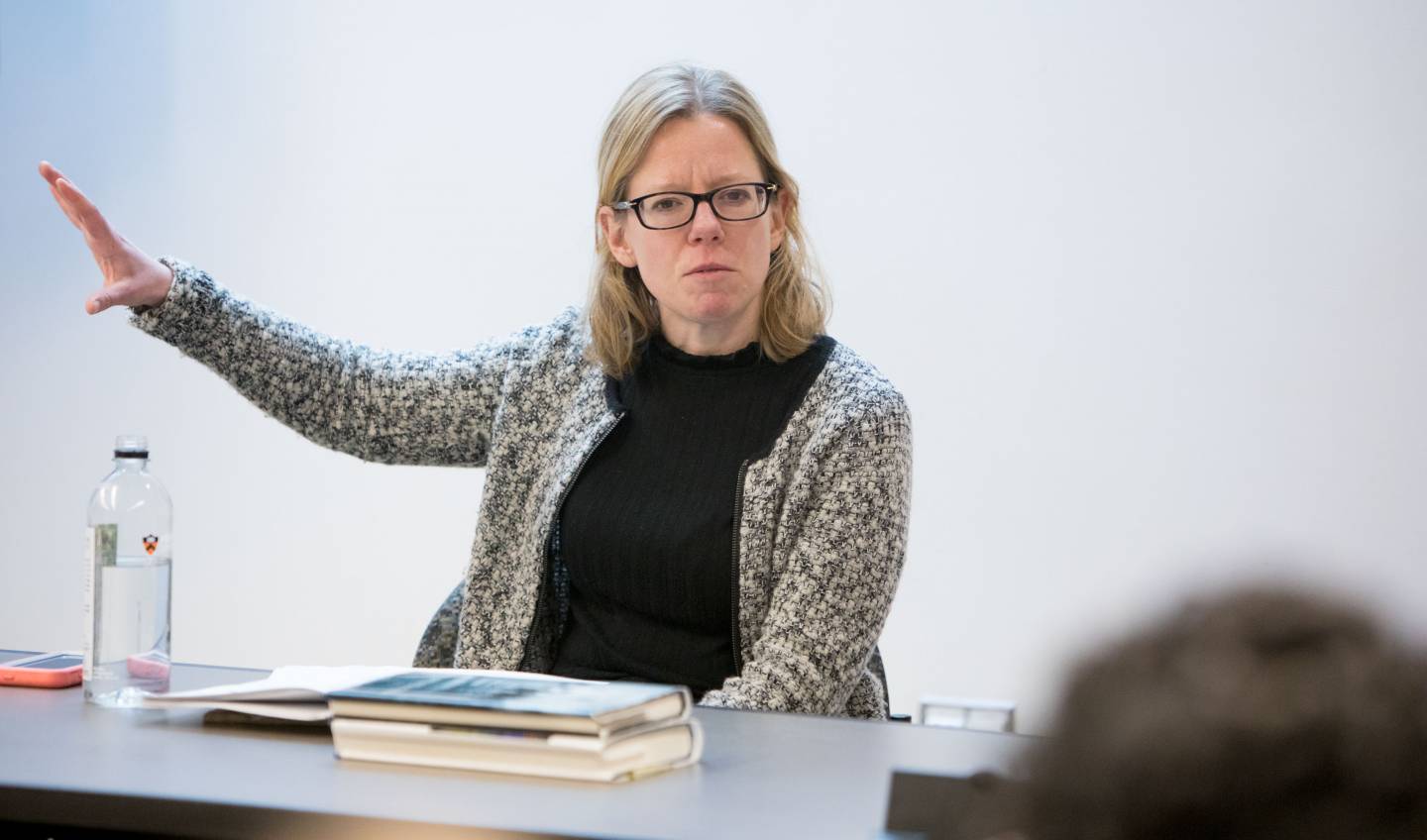 “It was a really beautiful experience to see so many cultures, side by side, contributing to the community," said junior Brittany Smith. "To see resettled refugees adding vibrant vitality to Buffalo firsthand was breathtaking."

The students visited the West Side Bazaar, a market that was started as an incubator to help refugee entrepreneurs realize their dream of becoming small business owners. At the bazaar, refugees prepare and sell authentic food and retail from their home countries, ranging from Ethiopian and Thai cuisine to macramé crafts and African clothing.

“The options and the quality of the food was amazing, but it was even better to observe the non-refugee Buffalo residents eating around me,” said Novo-Viano. “From their conversations, I learned that they frequent the bazaar for lunch and have developed a fondness for and good relationship with the refugee business owners who work there.”

She added, “It was exciting to hear the bazaar will be moving to a larger location to accommodate the amount of business they've been getting — truly a testament to the wonderful things refugees and immigrants bring to our country!”

Staff at the agencies noted that the mayor of Buffalo and the governor of New York support their efforts with funding to make refugee resettlement in Buffalo succeed. “We’ve embraced our refugee community,” said Zulawski. “The city in general is very supportive.

Buffalo’s attitude toward resettlement has secured the city a positive reputation among refugees. Junior Angela Wu described an encounter with Nadeen Yousef, a refugee from Iraq and the owner of a small business in the West Side Bazaar. Yousef was given three options of where she could move in the U.S. — Miami being one of them. Wu observed, “For someone who’s from the Middle East, [Miami] might have been a more natural climate, but [Yousef] decided on Buffalo, specifically because she knew it was very welcoming to refugees.” 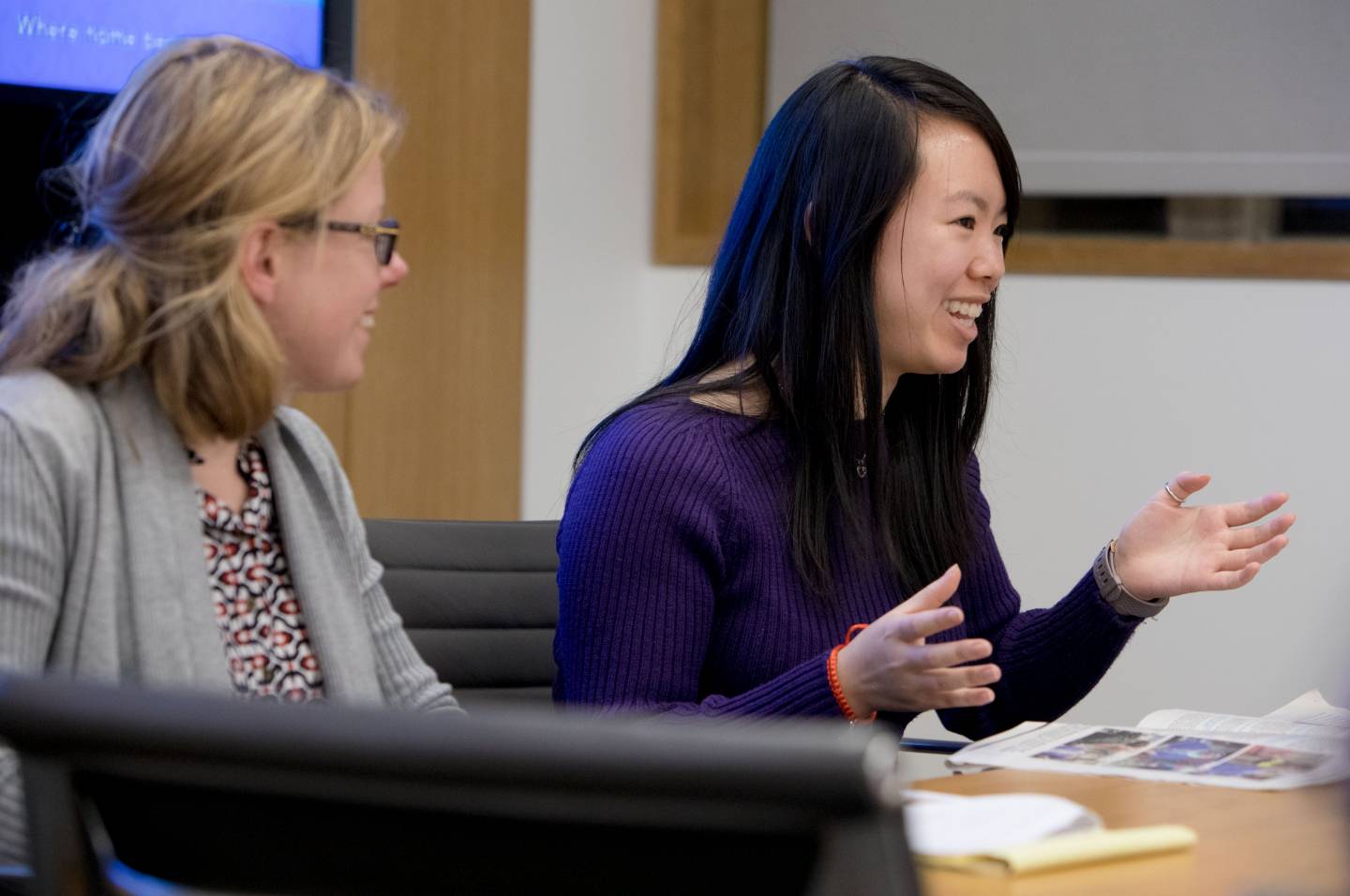 Angela Wu, a member of the Class of 2019, shares her encounter with a refugee from Iraq at the Princeton panel discussion.

“There’s a reason Buffalo is called the 'City of Good Neighbors,'” said Hefner.

For many students, the trip brought to life the topics they encountered in Stilz’s course or their values and public life coursework. “As an ethics course, the questions we were asking about migration and immigration laws were largely normative,” said Novo-Viano. “Seeing the reality of the refugees and asylum seekers, and hearing about their experiences and difficulties in the system gave me knowledge that contributed to my understanding of the ethics of migration.”

RJ Hernandez, a junior, agreed: “The trip provided a more visible, concrete layer of understanding for me, which built on the theoretical discussions we had in Professor Stilz’s seminar; we had discussions about the complications refugees face when entering certain countries, and the trip allowed me to see how these challenges are carried over into the integration process.”

While the trip illustrated many of the obstacles refugees and asylum seekers encounter, the students were encouraged by the notion that Buffalo can be a model for mutually beneficial resettlement. Last month, Stilz and many of the students who attended the trip convened for a panel discussion to share their observations with members of Princeton's faculty migration research group.

“Standing in the West Side Bazaar surrounded by the bustle of businesses started and run by refugees, I had the immense desire to capture that moment,” said Smith. “Standing in the center of cultural diversity and flourishing community, I wanted to bottle it up and share with the world that refugees can — and do — contribute to society.” 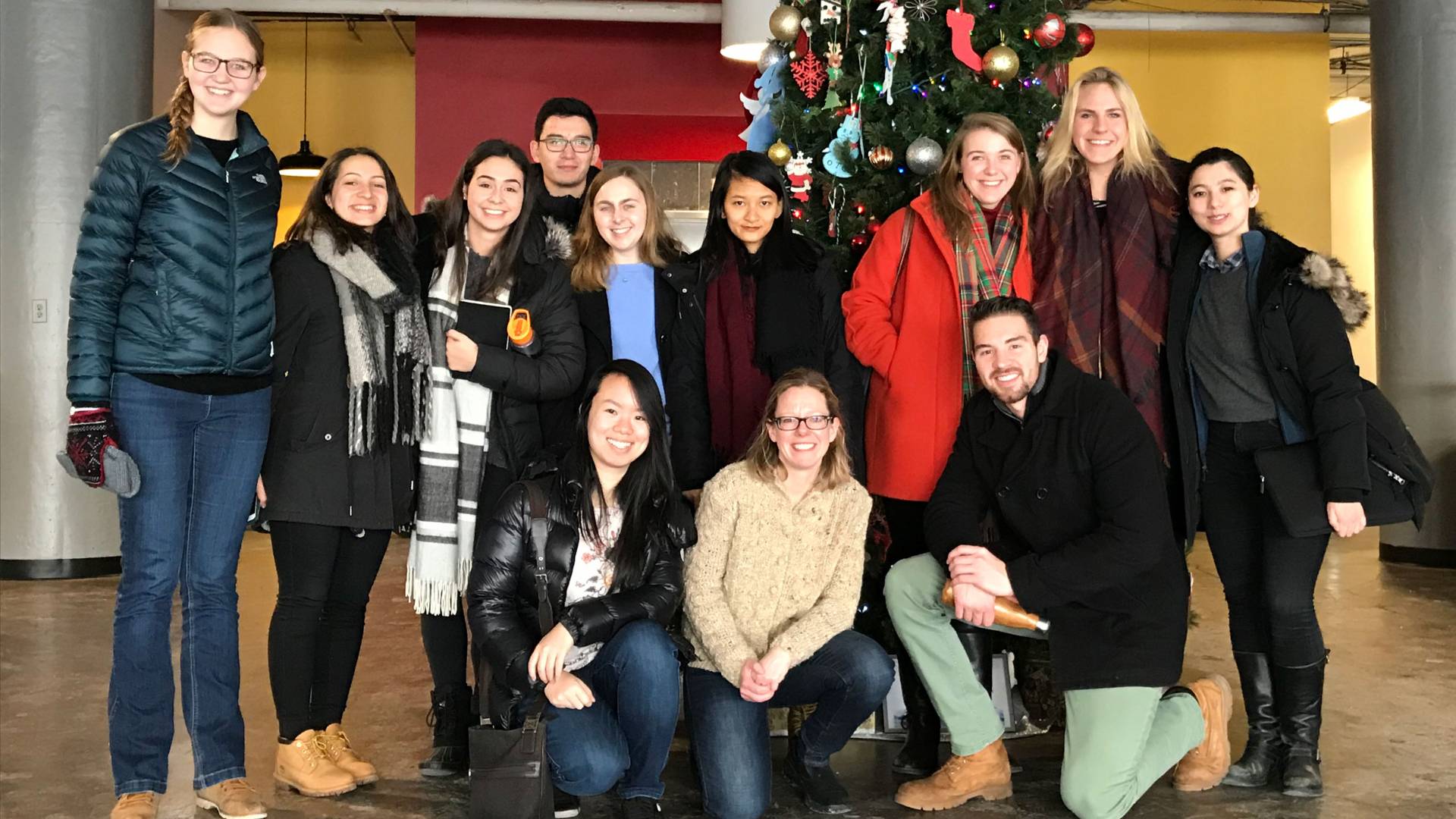