Have you ever played with a baby and felt a sense of connection, even though they couldn’t yet talk to you? New research suggests that you might quite literally be “on the same wavelength,” experiencing similar brain activity in the same brain regions. 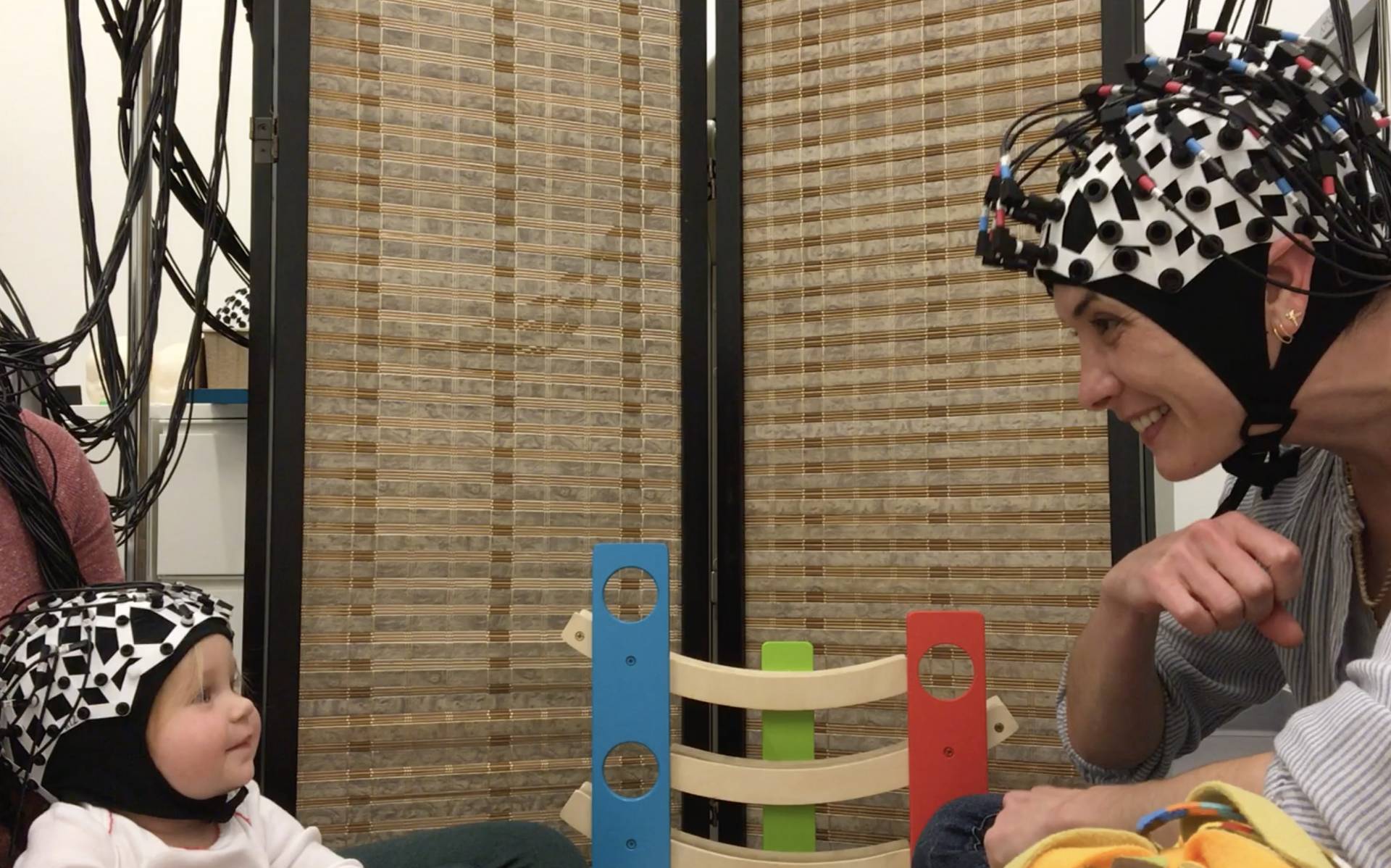 It's not your imagination — you and your baby really are on the same wavelength. A team of Princeton researchers has developed a way to measure baby and adult brain activity during natural interaction. In their experiment, an adult spent five minutes playing, singing songs and reading "Goodnight Moon" with babies and toddlers, as the researchers measured neural synchrony using a method called functional near-infrared spectroscopy.

A team of Princeton researchers has conducted the first study of how baby and adult brains interact during natural play, and they found measurable similarities in their neural activity. In other words, baby and adult brain activity rose and fell together as they shared toys and eye contact. The research was conducted at the Princeton Baby Lab, where University researchers study how babies learn to see, talk and understand the world.

“Previous research has shown that adults’ brains sync up when they watch movies and listen to stories, but little is known about how this ‘neural synchrony’ develops in the first years of life,” said Elise Piazza, an associate research scholar in the Princeton Neuroscience Institute (PNI) and the first author on a paper published Dec. 17, 2019, in Psychological Science.

Studying real-life, face-to-face communication between babies and adults is quite difficult. Most past studies of neural coupling, many of which were conducted in Hasson’s lab, involved scanning adults’ brains with functional magnetic resonance imaging (fMRI), in separate sessions, while the adults lay down and watched movies or listened to stories.

But to study real-time communication, the researchers needed to create a child-friendly method of recording brain activity simultaneously from baby and adult brains. With funding from the Eric and Wendy Schmidt Transformative Technology Grant, the researchers developed a new dual-brain neuroimaging system that uses functional near-infrared spectroscopy (fNIRS), which is highly safe and records oxygenation in the blood as a proxy for neural activity. The setup allowed the researchers to record the neural coordination between babies and an adult while they played with toys, sang songs and read a book.

The same adult interacted with all 42 infants and toddlers who participated in the study. Of those, 21 had to be excluded because they “squirmed excessively,” and three others flat-out refused to wear the cap, leaving 18 children, ranging in age from 9 months to 15 months.

The caps collected data from 57 channels of the brain known to be involved in prediction, language processing and understanding other people’s perspectives.

When they looked at the data, the researchers found that during the face-to-face sessions, the babies’ brains were synchronized with the adult’s brain in several areas known to be involved in high-level understanding of the world — perhaps helping the children decode the overall meaning of a story or analyze the motives of the adult reading to them.

When the adult and infant were turned away from each other and engaging with other people, the coupling between them disappeared.

That fit with researchers’ expectations, but the data also had surprises in store. For example, the strongest coupling occurred in the prefrontal cortex, which is involved in learning, planning and executive functioning and was previously thought to be quite underdeveloped during infancy.

“We were also surprised to find that the infant brain was often ‘leading’ the adult brain by a few seconds, suggesting that babies do not just passively receive input but may guide adults toward the next thing they’re going to focus on: which toy to pick up, which words to say,” said Lew-Williams, who is a co-director of the Princeton Baby Lab.

“While communicating, the adult and child seem to form a feedback loop,” Piazza added. “That is, the adult’s brain seemed to predict when the infants would smile, the infants’ brains anticipated when the adult would use more ‘baby talk,’ and both brains tracked joint eye contact and joint attention to toys. So, when a baby and adult play together, their brains influence each other in dynamic ways.”

This two-brain approach to neuroscience could open doors to understanding how coupling with caregivers breaks down in atypical development — such as in children diagnosed with autism — as well as how educators can optimize their teaching approaches to accommodate children’s diverse brains.

The researchers are continuing to investigate how this neural coupling relates to preschoolers’ early language learning.

“Infant and adult brains are coupled to the dynamics of natural communication,” by Elise A. Piazza, Liat Hasenfratz, Uri Hasson and Casey Lew-Williams, was published Dec. 17, 2019, in Psychological Science. This work was supported by the Princeton University C. V. Starr Fellowship to E. A. Piazza; the Eric and Wendy Schmidt Transformative Technology Award to E. A. Piazza, U. Hasson and C. Lew-Williams; National Institutes of Health Grant 5DP1HD091948 to U. Hasson; and NIH Grants R01HD095912 and R03HD079779 to C. Lew-Williams.