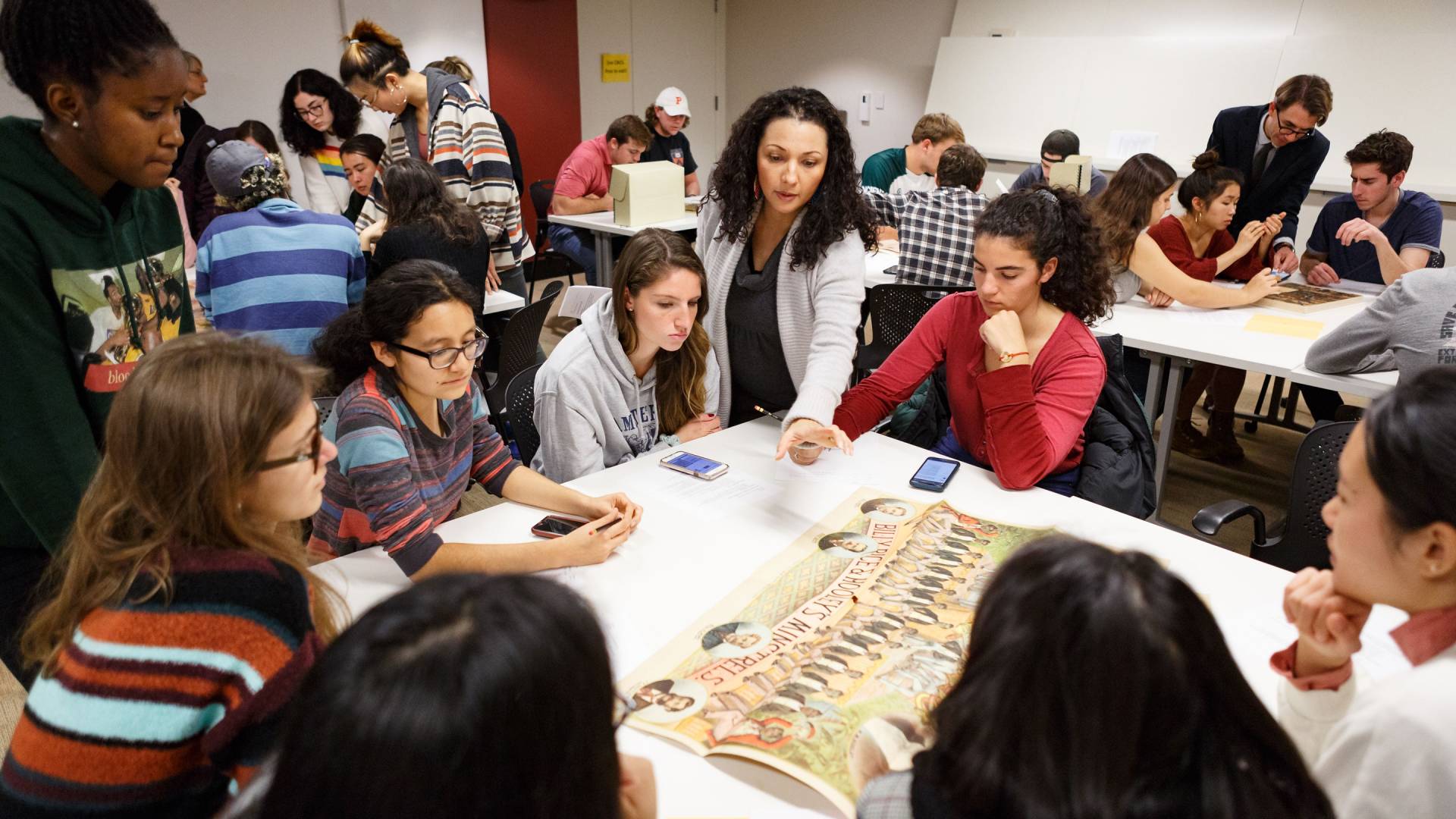 Teaching with Special Collections: ‘America Then and Now’

Students in the team-taught course "America Then and Now" explore cultural, social and political history through a range of experiences, including hands-on archival research. Pictured: At a visit to Princeton University Library's Special Collections, Aisha M. Beliso-De Jesús (standing center), professor of American studies, leads an impromptu discussion about 19th- and 20th-century materials from minstrel shows.

This fall semester, Princeton undergraduates in the team-taught course “America Then and Now” explored the shaping of America through a range of experiences in and outside the classroom. In mid-November, the nearly 100 students in the course visited Princeton University Library’s (PUL) Special Collections to gain hands-on experience in archival research.

The course syllabus brought cultural, social and political history to life through a range of media from books to musical theater, including Childish Gambino’s music video, “This Is America”; Ernesto Chavez’s “The U.S. War With Mexico: A Brief History with Documents"; Lin-Manuel Miranda’s musical and Quiara Alegría Hudes’s book, “In the Heights”; “The Chinese Must Go: Violence, Exclusion, and the Making of the Alien in America” by Beth Lew-Williams, associate professor of history at Princeton; and more.

“America Then and Now” was first taught in 2013 and was designed with the overarching question: What should every Princeton student, upon graduating, know about America? In this gateway course, students gain a broad perspective on America by considering an array of historical and contemporary issues central to the development of this country. 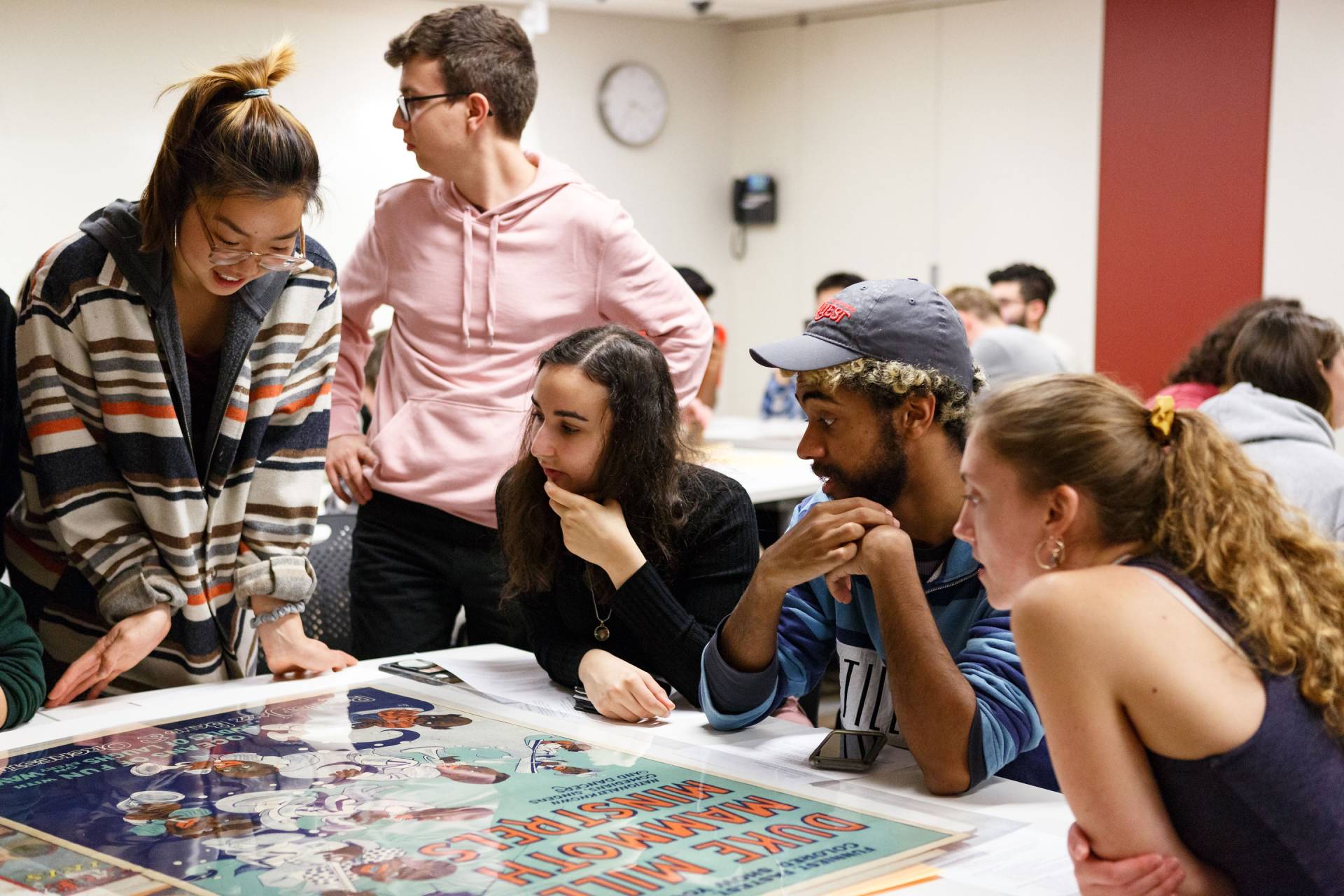 Students exchange ideas and impressions as they examine a theater broadside. Other materials drawn from the thousands of theatrical pieces in Princeton’s collections included playbills, songbooks and tickets.

This fall, three professors with scholarly focuses across the arts and humanities created the course curriculum and rotated lectures on immigration, imperialism and race.

“We wanted each of us to teach material in our own fields and also create coherence among the lectures,” said Aisha Beliso-De Jesús, professor of American studies. She co-taught the course with William Gleason, the Hughes-Rogers Professor of English and American studies, and Stacy Wolf, professor of theater and director of the Program in Music Theater.

In advance of the class’s visits to PUL’s Special Collections, Wolf introduced a unit on race with Suzan-Lori Parks’s Pulitzer-Prize winning play, “Topdog/Underdog.” Wolf called the play, about two brothers named Lincoln and Booth, “a metaphor for America.”

She added, “It deals with race, masculinity, poverty and performance ... and also speaks to the history of minstrelsy in the U.S.”

During the week following the lecture, precepts of about 15 students each visited the Special Collections to examine 19th- and 20th-century materials from minstrel shows to consider how racist representations from the past affect the U.S. today. 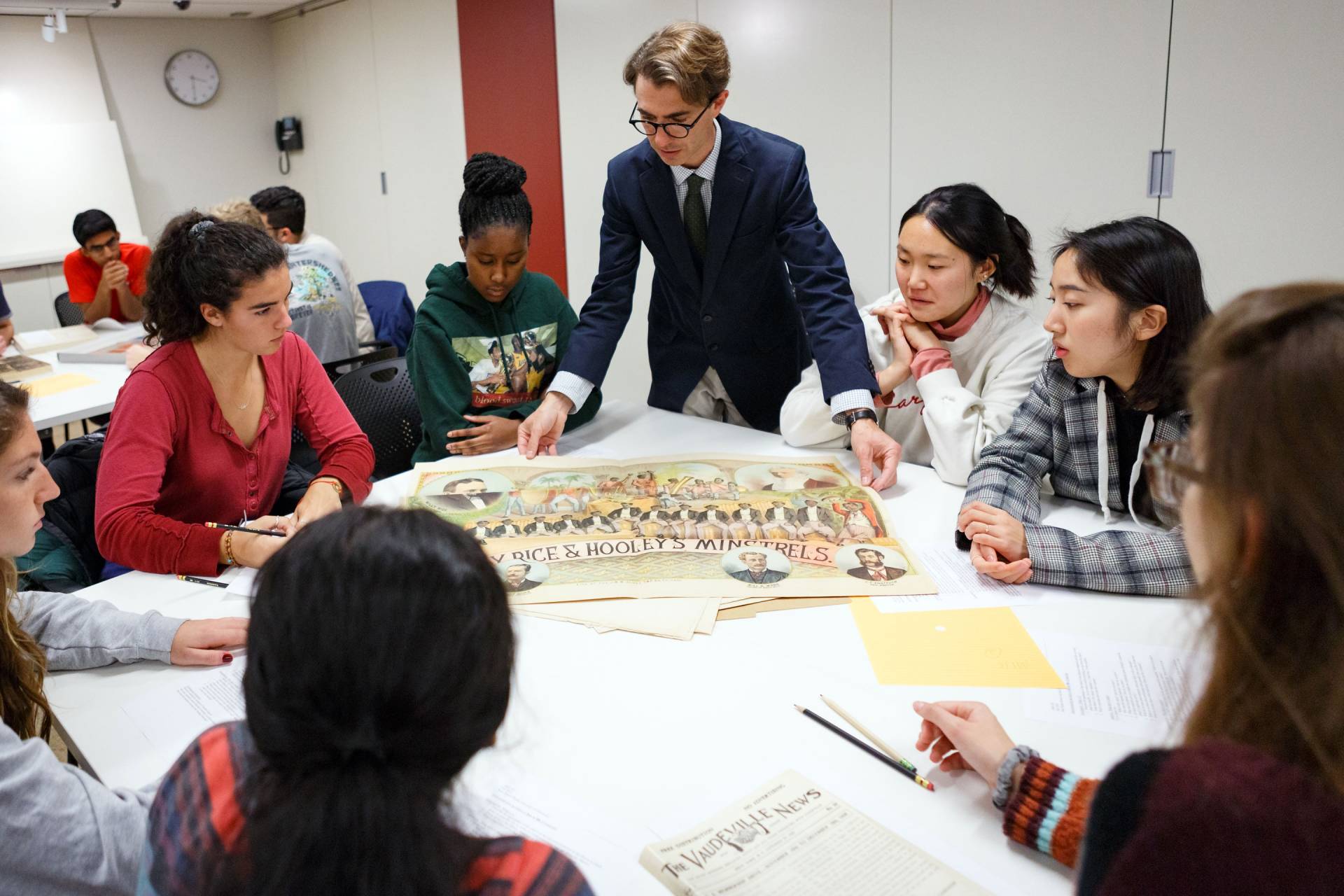 Gabriel Swift (standing), librarian for Special Collections, encourages students to apply the “5 W’s” — who, what, why, where and when — during an exercise in archival research.

Gabriel Swift, librarian for Special Collections, welcomed students with an exercise in archival research. He encouraged students to apply the “5 W’s” — who, what, why, where and when — while examining materials drawn from the thousands of theatrical pieces in Princeton’s collections.

Students gathered around tables that displayed items including broadsides, playbills, songbooks and admission tickets. They studied an anti-slavery needlepoint work crafted in 1848 by abolitionist Maria Wild, and an 18th-century abolitionist Wedgwood medallion with the slave image and inscription, “Am I not a man and a brother.”

Sophomore Connor Scaglione said the experience added a real-life dimension to the classroom discussions. “I think it was really valuable to look at the different resources, touch and talk about the materials. I felt lucky, honestly, to be able to do that.”

“Seeing the rare collections, what people back in the day saw and what they thought, was pretty amazing,” said sophomore Annie Kong.

At one table, students analyzed the symbols and imagery of a 20th-century broadside displaying white people in blackface.

“How does this tie back to the culture of lynching and Jim Crow?” asked Beliso-De Jesús.

“Understanding the differences in how white people and black people viewed each other and where we’re coming from,” said one student, “leads to a better understanding of how we move forward.”

After reading a sampling of joke books used in minstrel shows, sophomore Teara Jamison said, “it was problematic, but good to see the history.”

Beliso-De Jesús said students were challenged by the materials, finding them both compelling and upsetting. “Seeing difficult materials that they’d read about up close and in person can help students recognize not only the troubling history of minstrelsy but also the ways that its racism continues to impact current representations today,” she said. 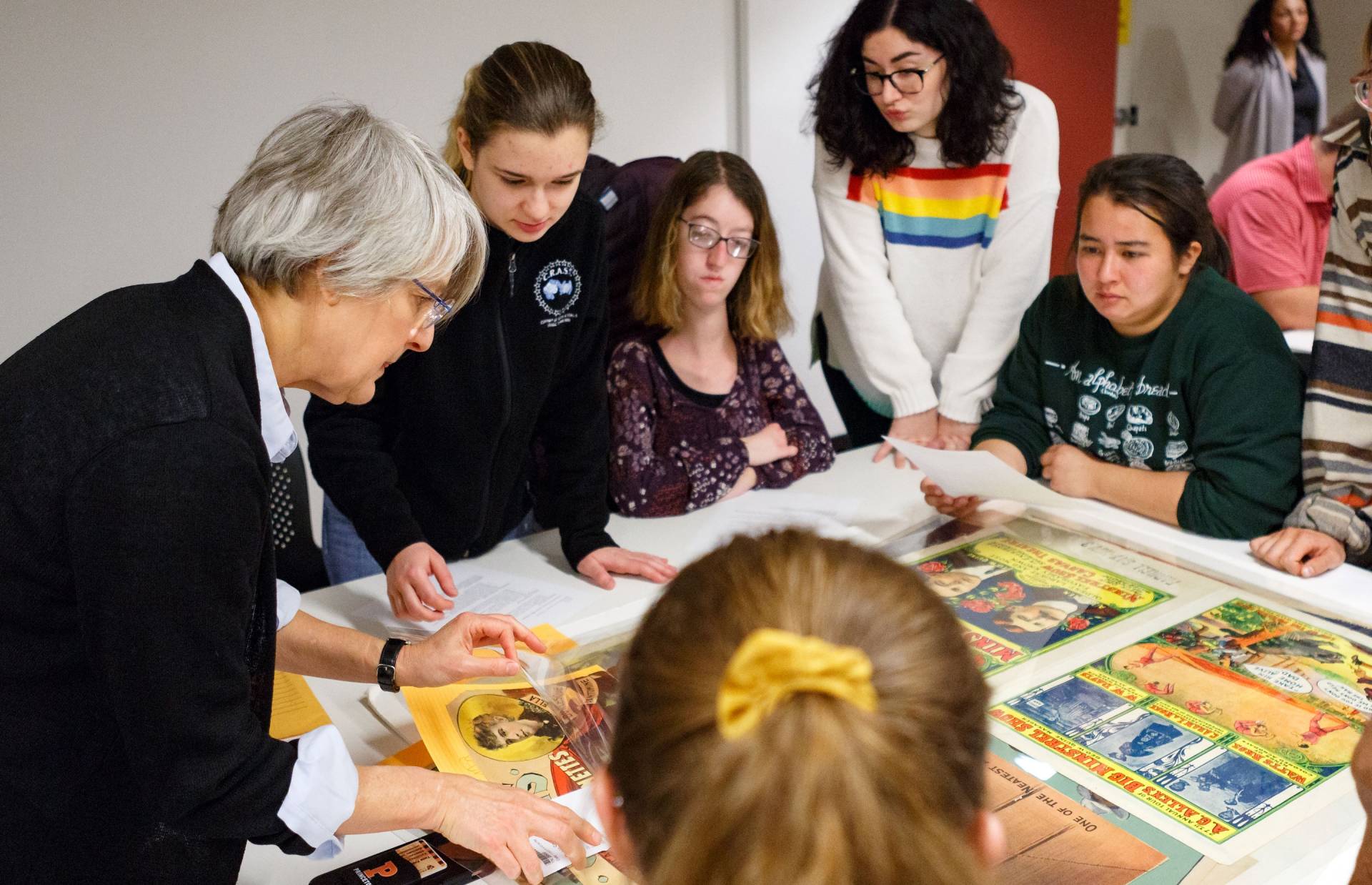 Stacy Wolf (left), professor of theater and director of the Program in Music Theater, said: “It’s transformative to come to the library. It makes some [students] historians. Last year, three of my students from a class of 20 ended up doing senior theses with the archives.”

A ‘transformative’ experience for student-historians

“Many students in “America Then and Now” are in their first or second year at the University,” said Gleason. “Having the chance to see primary materials early in their Princeton careers might lead them to do more work in the collections later on.”

Swift encouraged students’ curiosity. “You don’t need a strong thesis statement to start calling materials to the reading room. A lot of the best research begins with serendipity,” he said.

Faculty requests to teach with the Special Collections continues to grow annually. There were some 300 class visits in the 2018-19 academic year. This fall, Swift was appointed into a new, dedicated position for academic programs. He helped launch the University’s Teach with Collections initiative, a collaboration between PUL, the Princeton University Art Museum and the McGraw Center for Teaching and Learning.

“It’s transformative to come to the library,” Wolf said. “It makes some [students] historians. Last year, three of my students from a class of 20 ended up doing senior theses with the archives.”