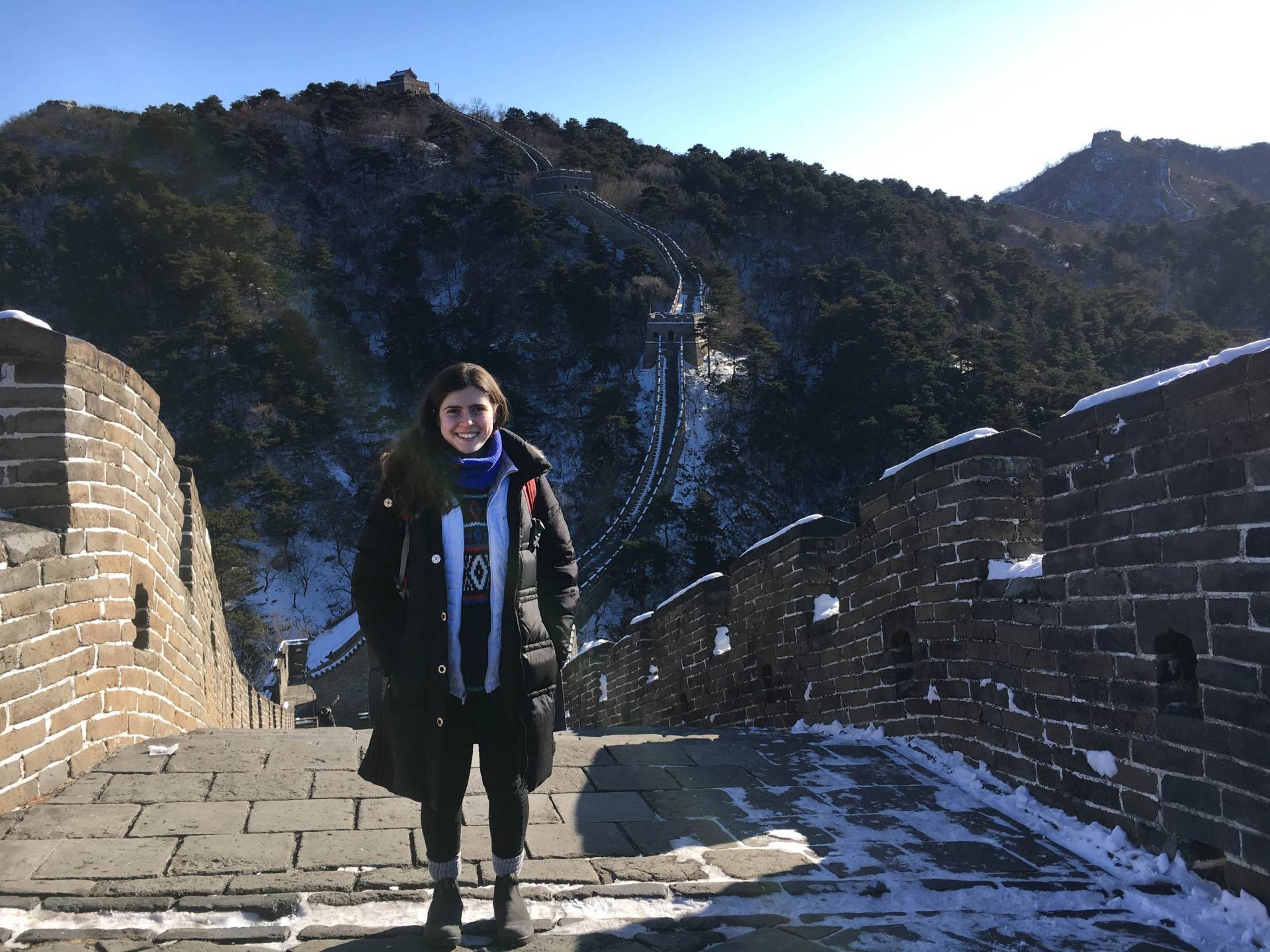 Naomi Cohen-Shields of Princeton’s Class of 2020 analyzed the effectiveness of China’s efforts to reduce air pollution for her senior thesis research. She also investigated how air pollution differs across China’s provinces based on regional affluence — and if poor populations face more exposure. Cohen-Shields (pictured at the Great Wall of China in December 2019) graduated with a bachelor’s degree in civil and environmental engineering and certificates in environmental studies and values and public life.

Photo by Naomi Cohen-Shields, Class of 2020

After months of researching and analyzing China’s notorious air pollution for her Princeton senior thesis, Naomi Cohen-Shields stepped off a plane in Beijing in December 2019 to a shockingly clear sky. Her gaze fell across the unencumbered skyline of the city where the term “airpocalypse” had been coined in 2013 to describe the thick, toxic smog that enveloped China’s capital and most of the eastern half of the country.

What Cohen-Shields — who received her bachelor’s degree June 2 in civil and environmental engineering  — didn’t know was that wind and periodic snowstorms whisk away the smoke and exhaust. But these were exactly the kinds of details she went to China to look for. 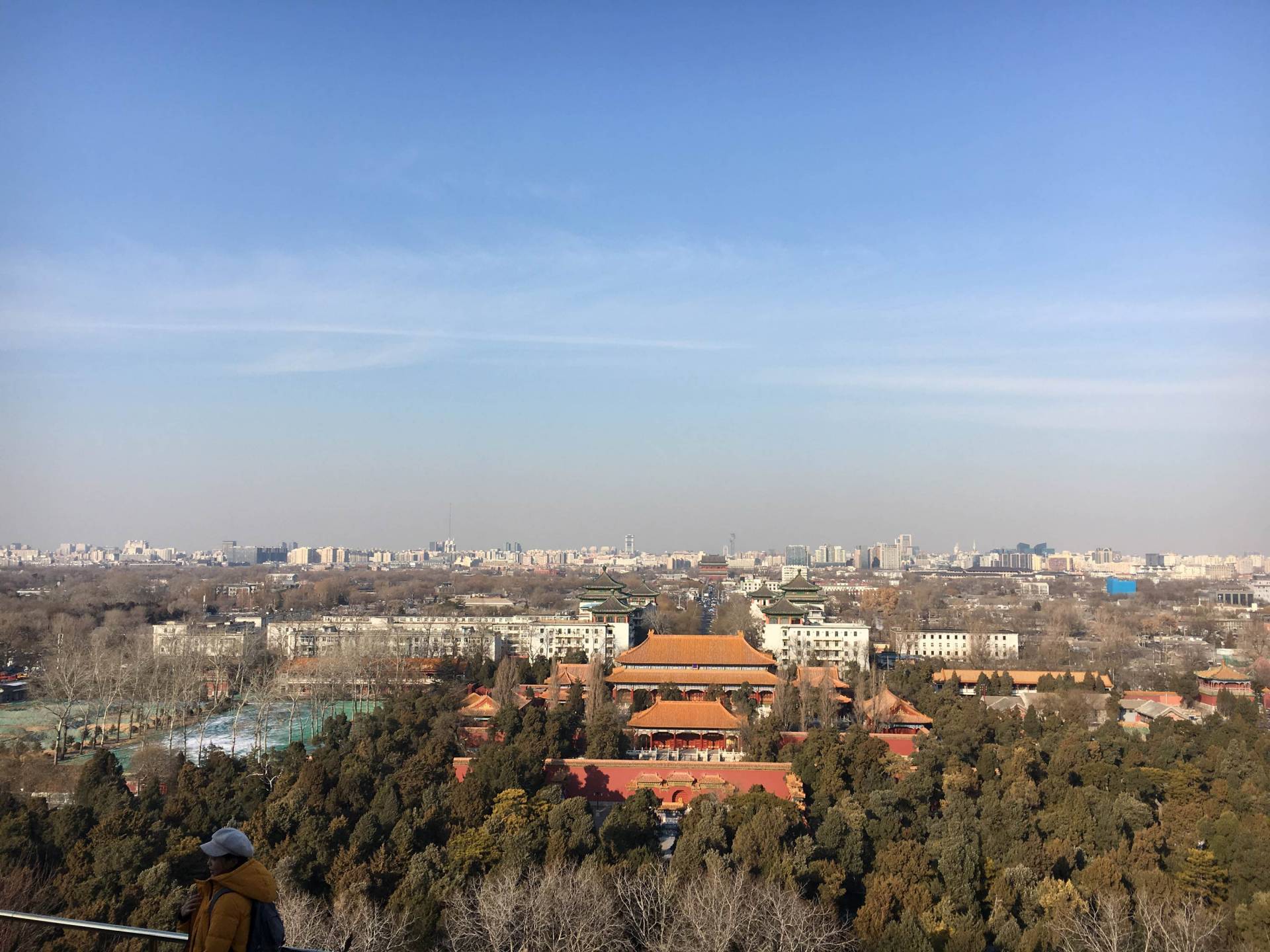 Cohen-Shields — supported in part by senior thesis funding from the Princeton Environmental Institute (PEI) — traveled to four cities in China to gain first-hand experience of the geographic, political and social factors that influence air quality, but that don’t appear in scientific literature. For example, she learned that air pollution in Beijing (pictured) is cleared by wind and periodic snowstorms.

For her thesis, Cohen-Shields analyzed the effectiveness of China’s efforts since 2013 to reduce air pollution and the massive toll it takes on public health and the economy. She also wanted to get behind the national data to investigate how air pollution differs across China’s 22 provinces based on regional affluence — and if its poor and rural populations bear a larger share of the burden. She found that while China’s efforts to clean its air have made dramatic progress, the largest improvements have occurred in its wealthier northern regions where air pollution has historically been highest.

“The air quality is still generally poor across China, but it has improved markedly,” Cohen-Shields said. “We’ve seen a lot of success across the board, but there’s been more success in reducing pollution in major metropolises known for having high levels of pollution and obviously are also areas of concentrated wealth.”

Cohen-Shields’ work — supported in part by senior thesis funding from the Princeton Environmental Institute (PEI) — also took her to four cities in China where she experienced the geographic and political factors that influence air quality, met with university researchers who study it, and talked with the people whose everyday actions ultimately make a difference.

“It exposed me to a lot of the different factors that need to be considered in any sort of analysis of air-pollution policy,” she said. “Numbers don’t necessarily add enough depth to what makes that transition hard. It was important to talk to the people who live through the reality I was trying to describe through numbers and research.”

Thesis adviser Denise Mauzerall, professor of civil and environmental engineering and public and international affairs and PEI associated faculty, said that Cohen-Shields in the end provided a comprehensive and up-to-date analysis of air pollution data out of China. But she also included an ethical component unique to this kind of research.

“She went beyond a traditional technical analysis to include an ethical analysis that was her own idea and explored the philosophical underpinnings of environmental justice,” said Mauzerall, who plans to help Cohen-Shields submit the paper to a peer-reviewed journal. “This is the first time that this kind of ethical component has been included in an analysis of Chinese air quality to my knowledge. China’s air pollution controls have helped everyone, but some have benefited more than others.”

Cohen-Shields was inspired by her interest in environmental justice. As a junior at Princeton, she founded the Princeton Environmental Activism Coalition (PEAC), which seeks to initiate environmental dialog and action on campus. The group launched the project “Faces of Climate Change” to highlight the different ways in which people are affected by climate change and sponsored a day-long conference focused on the environmental movement in Puerto Rico. In the fall, Cohen-Shields will go to the Environmental Defense Fund in Washington, D.C., through a High Meadows Fellowship to work in the areas of climate science and climate action.

Cohen-Shields also was motivated by the work in Mauzerall’s group on air quality in China and India. Through her conversations with Mauzerall, she realized that not many people had looked into whether China’s well-documented struggles with air pollution were having a disproportionate effect on its less-affluent citizens.

“I’ve come to learn a lot about how climate issues are also social issues and how much of a role concepts of justice should play in finding solutions,” Cohen-Shields said. “It’s often poor and marginalized communities that face more extreme air pollution and also are more vulnerable to its impacts. When it comes to China, I haven’t yet seen a lot of research on that topic.”

“She’s more than just a scholar, she’s also an environmental activist,” Mauzerall said. “She’s an excellent researcher, a clear writer and she’s unflappable. I said it would be great if she could go to China and see what life there is like and, after talking with my Chinese students and colleagues, she just went.

“She met with their friends and families and ended up with a better appreciation for what China is like,” Mauzerall said. “Princeton provided a wonderful opportunity, and she took advantage of it and gained a valuable perspective on her work.” 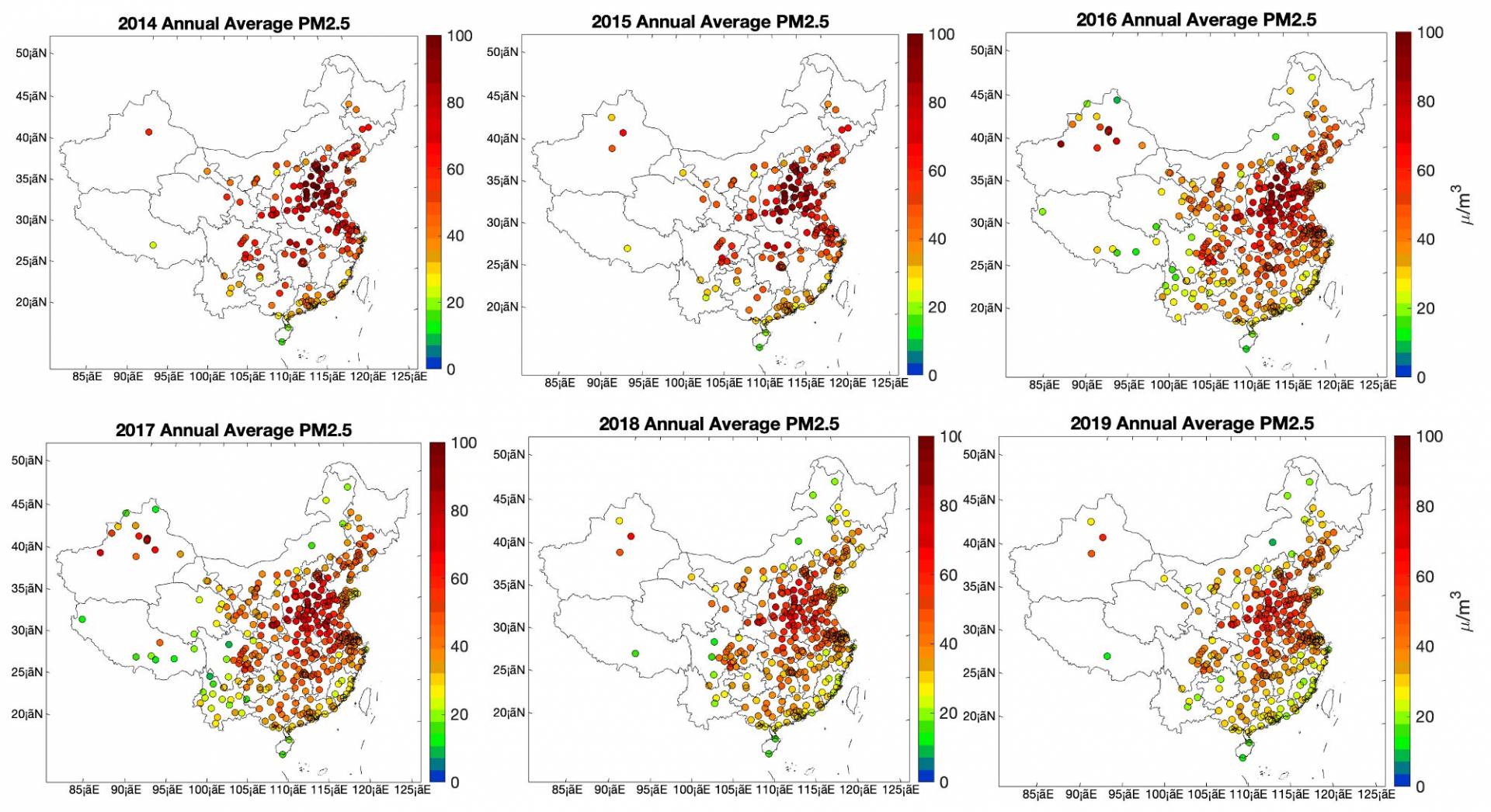 Cohen-Shields analyzed air pollution measurements collected by China’s national monitoring network from 2014 to 2019, focusing on fine particulate matter (PM2.5) and ozone. She found that China has experienced a sharp drop in PM2.5. At left, average annual PM2.5 content per year based on monitoring network data, with blue dots indicating the lowest levels and dark red dots denoting the highest.

Cohen-Shields first analyzed air-pollution measurements collected by China’s national monitoring network from 2014 to 2019. While the network gathers data on six pollutants, Cohen-Shields focused on the two that have the most severe health impacts, ozone (O3) and fine particulate matter (PM2.5). She found that since implementing its 2013 Action Plan for the Prevention and Control of Air Pollution, China has experienced a sharp drop in PM2.5 levels, and met the targets laid out in the 2018 Three-Year Action Plan to Win the Blue Sky Defense War, though PM2.5 is still above national air-quality standards in most locations.

On the other hand, Cohen-Shields found that ozone levels across China have risen considerably since 2014 — except in coastal cities — possibly due to changes in atmospheric chemistry linked to lower levels of the reactive nitrogen oxide pollutants.

Cohen-Shields then correlated air quality to provincial gross regional product (GRP) to determine how exposure to ambient air pollution varies by socioeconomic level. She found that China’s large northern cities experienced the greatest drops in PM2.5 levels, with the Beijing-Tianjin-Hebei region — the largest urbanized area in Northern China — seeing a 45% decrease. As a result, the central inland provinces — which experienced more modest decreases in particulate pollution — now have the country’s highest PM2.5 levels.

Some measures have simply moved industry to rural areas to reduce urban pollution, Cohen-Shields said. In Beijing, coal-burning power plants were removed. Now, in addition to increased usage of natural gas, the city instead receives power from transmission lines connected to coal-burning plants in Western China.

“It becomes a question of whether you’re just moving the problem rather than solving it,” Cohen-Shields said. In addition to moving the coal plants, China greatly increased the use of technology that removes pollution from power plant smokestacks. Unfortunately, these pollution controls require energy to operate, which increases the carbon dioxide they emit relative to what they emitted before the controls were installed.

Another example, Mauzerall said, is that many poor families in China previously relied on small coal-burning stoves for heat. Research — including a 2016 paper from Mauzerall’s group — showed that these small stoves contributed nearly 40% of PM2.5 pollution in the Beijing-Tianjin-Hebei region. To curb emissions, the Chinese government initiated a campaign to remove the stoves, but only subsequently started subsidizing cleaner burning stoves. Many people were initially left without heat during the North China winter. 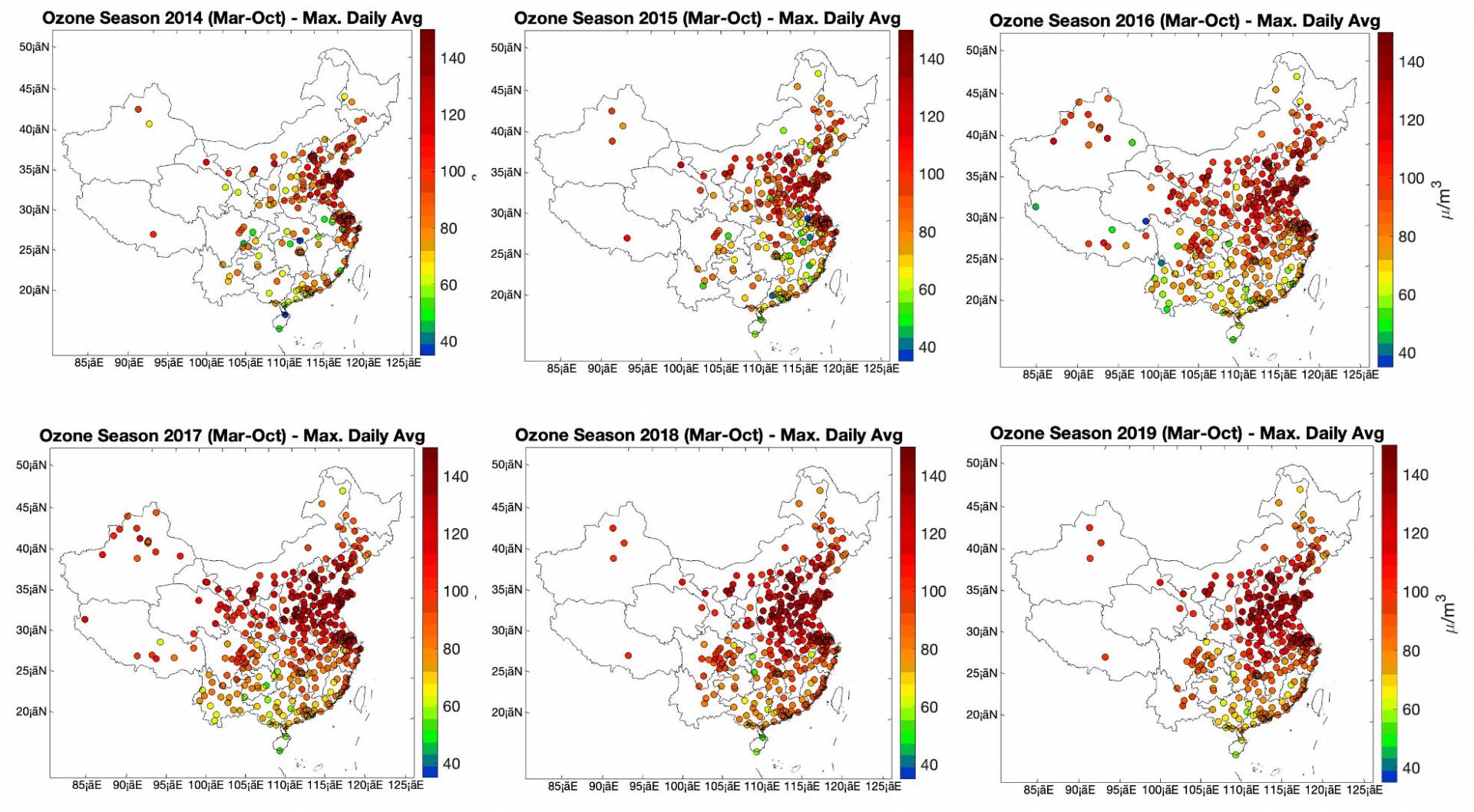 In contrast to levels of fine particulate matter, Cohen-Shields found that ozone levels across China have mostly risen considerably since 2014, possibly due to changes in atmospheric chemistry from lower levels of reactive pollutants. At left, the maximum daily average of ozone between March and October for the years 2014-19. Blue dots indicate the lowest levels and dark red dots indicate the highest.

“I think it greatly improved regional air quality, but the cost to the poor was initially large,” Mauzerall said. “The government’s air pollution reduction achievements are remarkable, but additional help for the poor is needed to facilitate a transition to sustainable energy. Assistance for poor provinces by wealthy provinces would make sense since winds carry pollution. We have found that pollution in the Beijing region is heavily impacted by emissions from the surrounding poorer provinces.”

Cohen-Shields said that her research suggests that the true health burden the poor in China experience due to pollution likely hides in provincial-level data. She hopes that researchers will build off of her work by examining how pollution is distributed within a province, then pair that data with concentrations of wealth and poverty. An analysis such as that could help guide policies aimed at simultaneously spurring economic growth and improving air quality, especially for those provinces that are the poorest and have the worst air quality.

“It would be interesting to do studies similar to those that have been done in the United States within one urban area,” she said.

“I started asking questions on the equity of air policy in China that I’m not sure were strongly considered before,” Cohen-Shields said. “I’m hoping that my work provides a framework to do more localized analyses of how national air policies in China are implemented at the provincial level, who they’re focused on benefiting, and how those impacts are distributed.

“None of it is a simple story,” she said. “You have to dig deeper, but hopefully the digging is worth doing.”