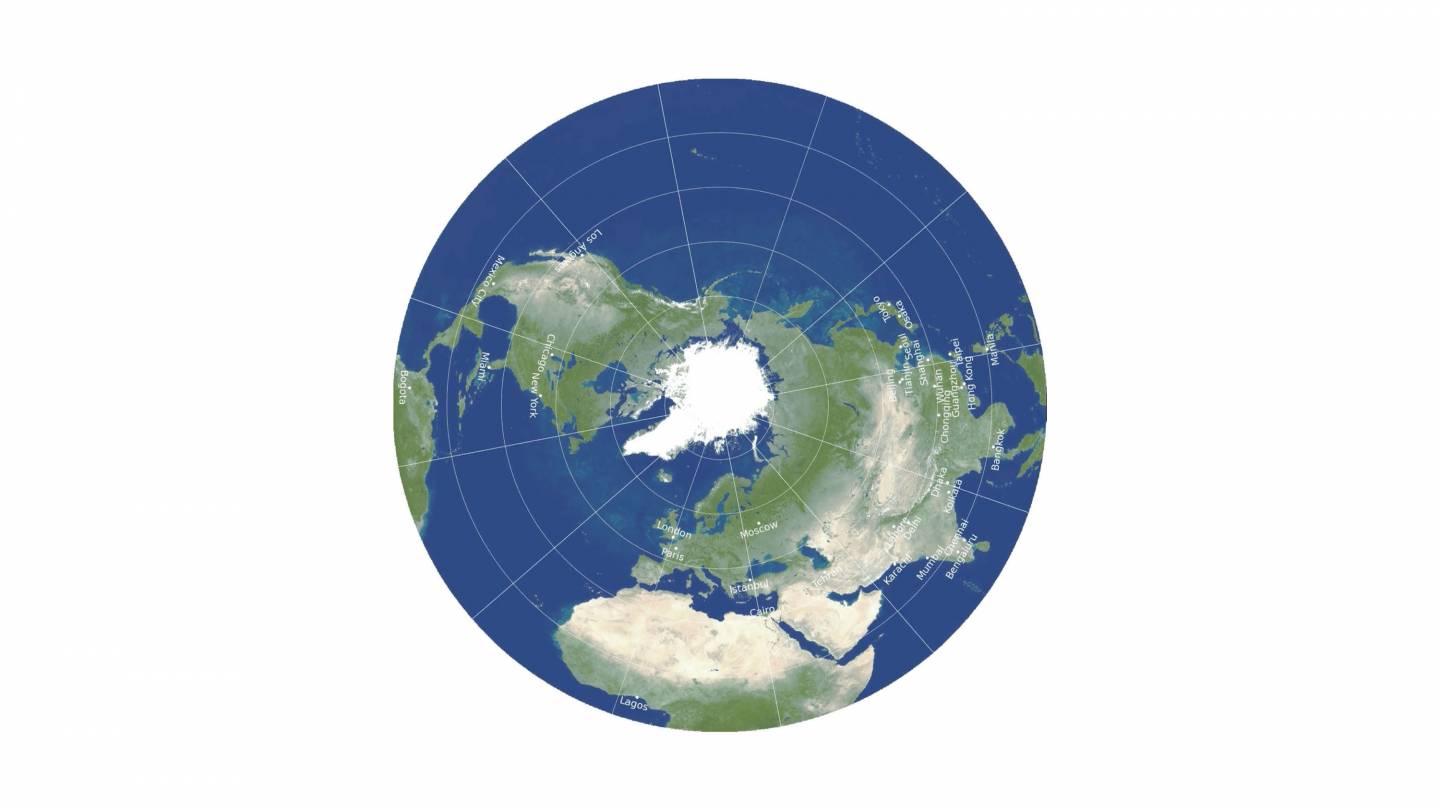 Princeton professors J. Richard Gott and Robert Vanderbei worked with Drexel professor David Goldberg to create a revolutionary new map: a two-sided disk that can slip inside a textbook or be stacked neatly for storage. It provides more accurate distances than any existing flat map, while keeping visual distortions at a minimum.

How do you flatten a sphere?

For centuries, mapmakers have agonized over how to accurately display our round planet on anything other than a globe.

Now, a fundamental re-imagining of how maps can work has resulted in the most accurate flat map ever made, from a trio of map experts: J. Richard Gott, an emeritus professor of astrophysics at Princeton and creator of a logarithmic map of the universe once described as “arguably the most mind-bending map to date”; Robert Vanderbei, a professor of operations research and financial engineering who created the “Purple America” map of election results; and David Goldberg, a professor of physics at Drexel University.

Their new map is two-sided and round, like a phonograph record or vinyl LP. Like many radical developments, it seems obvious in hindsight. Why not have a two-sided map that shows both sides of the globe? It breaks away from the limits of two dimensions without losing any of the logistical convenience — storage and manufacture — of a flat map.

“This is a map you can hold in your hand,” Gott said.

In 2007, Goldberg and Gott invented a system to score existing maps, quantifying the six types of distortions that flat maps can introduce: local shapes, areas, distances, flexion (bending), skewness (lopsidedness) and boundary cuts (continuity gaps). The lower the score, the better: a globe would have a score of 0.0.

“One can’t make everything perfect,” said Gott, who is also a 1973 graduate alumnus of Princeton. “A map that is good at one thing may not be good at depicting other things.” The Mercator projection, popular on classroom walls and used as the basis for Google maps, is excellent at depicting local shapes, but it distorts surface areas so badly near the North and South Poles that polar regions are usually simply chopped off. 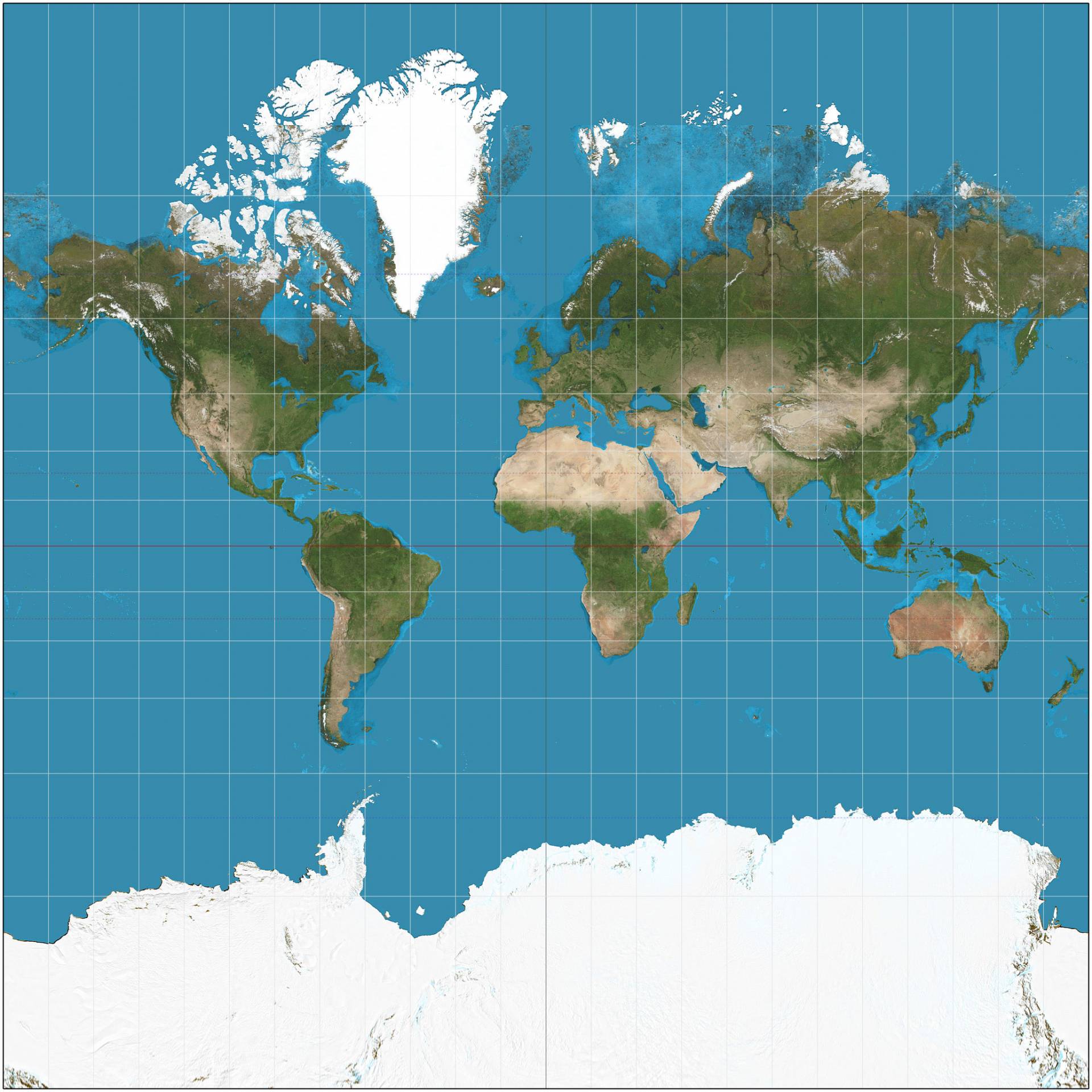 In the Mercator projection, the polar regions are completely distorted — Antarctica looks bigger than all other continents combined — and distances are misleading: Japan and Hawaii look very far apart. Under the system designed by Goldberg and Gott to quantify map errors, where lower numbers represent less distortion, the Mercator projection receives a score of 8.296.

Using their metrics, the best previously known flat map projection was the Winkel Tripel, with a Goldberg-Gott score of 4.563. But that still had the “boundary cut” problem of splitting the Pacific Ocean and creating the illusion of great distance between Asia and Hawaii. 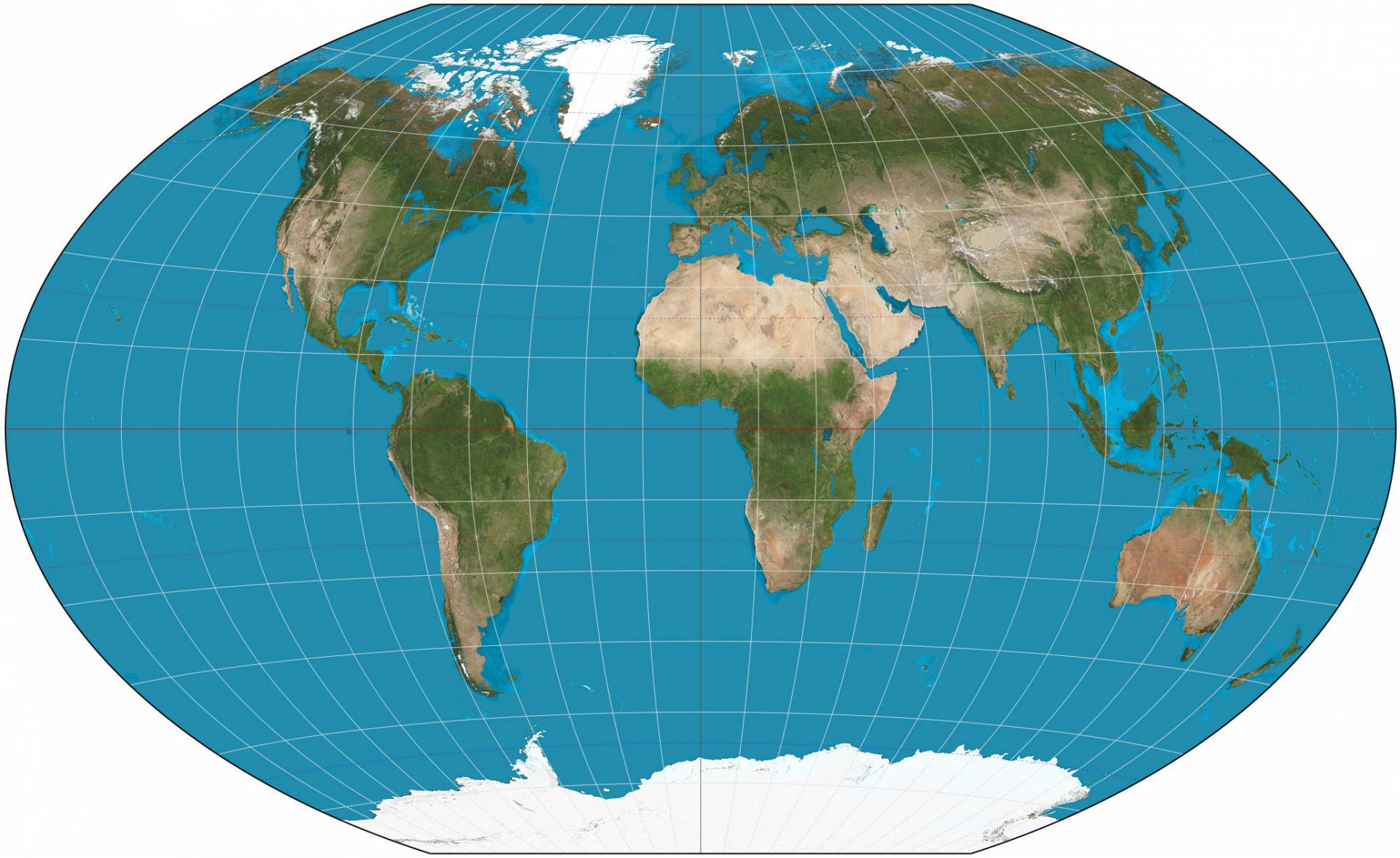 The Winkel Tripel projection, chosen by the National Geographic for its world maps, represents the poles more accurately than the Mercator, but it still distorts Antarctica badly and creates the illusion that Japan is hugely to the east of California, instead of its nearest neighbor to the west. Goldberg-Gott score: 4.563

Clearly, a completely new approach was needed. Gott drew a comparison to Olympic high jumpers: In 1968, Dick Fosbury shocked sports fans by arching his back and jumping over the bar backwards. He set a new record and won a gold medal, and high jumpers have jumped backwards ever since.

“We’re like Mr. Fosbury,” Gott said. “We’re doing this to break a record, to make the flat map with the least error possible. So, like him, we’re surprising folks. We’re proposing a radically different kind of map, and we beat Winkel Tripel on each and every one of the six errors.”

The inspiration came from Gott’s work on polyhedra — solid figures with many faces.

Polyhedral maps are nothing new — in 1943, Buckminster Fuller broke the world into regular shapes, and provided instructions for how to fold it up and assemble it as a polyhedral globe — but while he could protect the shapes of continents, Fuller shredded the oceans and increased many distances, such as between Australia and Antarctica.

Buckminster Fuller popularized the “Dymaxion” polyhedral projection, based on an unfolded icosahedron. Antarctica is “round, as it properly should be,” said Gott, but this projection “shatters” the oceans. Goldberg-Gott score: greater than 15

In a recent paper, Gott began considering “envelope polyhedra,” with regular shapes glued together back-to-back, which led to the breakthrough idea for the double-sided map.

It can be displayed with the Eastern and Western Hemispheres on the two sides, or in Gott’s preferred orientation, the Northern and Southern Hemispheres, which conveniently allows the equator to run around the edge. Either way, this is a map with no boundary cuts. To measure distances from one side to the other, you can use string or measuring tape reaching from one side of the disk to the other, he suggested.

“If you’re an ant, you can crawl from one side of this ‘phonograph record’ to the other,” Gott said. “We have continuity over the equator. Africa and South America are draped over the edge, like a sheet over a clothesline, but they’re continuous.”

This double-sided map has smaller distance errors than any single-sided flat map — the previous record-holder being a 2007 map by Gott with Charles Mugnolo, a 2005 Princeton alumnus. In fact, this map is remarkable in having an upper boundary on distance errors: It is impossible for distances to be off by more than ± 22.2%. By comparison, in the Mercator and Winkel Tripel projections, as well as others, distance errors become enormous approaching the poles and essentially infinite from the left to the right margins (which are far apart on the map but directly adjacent on the globe). In addition, areas at the edge are only 1.57 times larger than at the center. 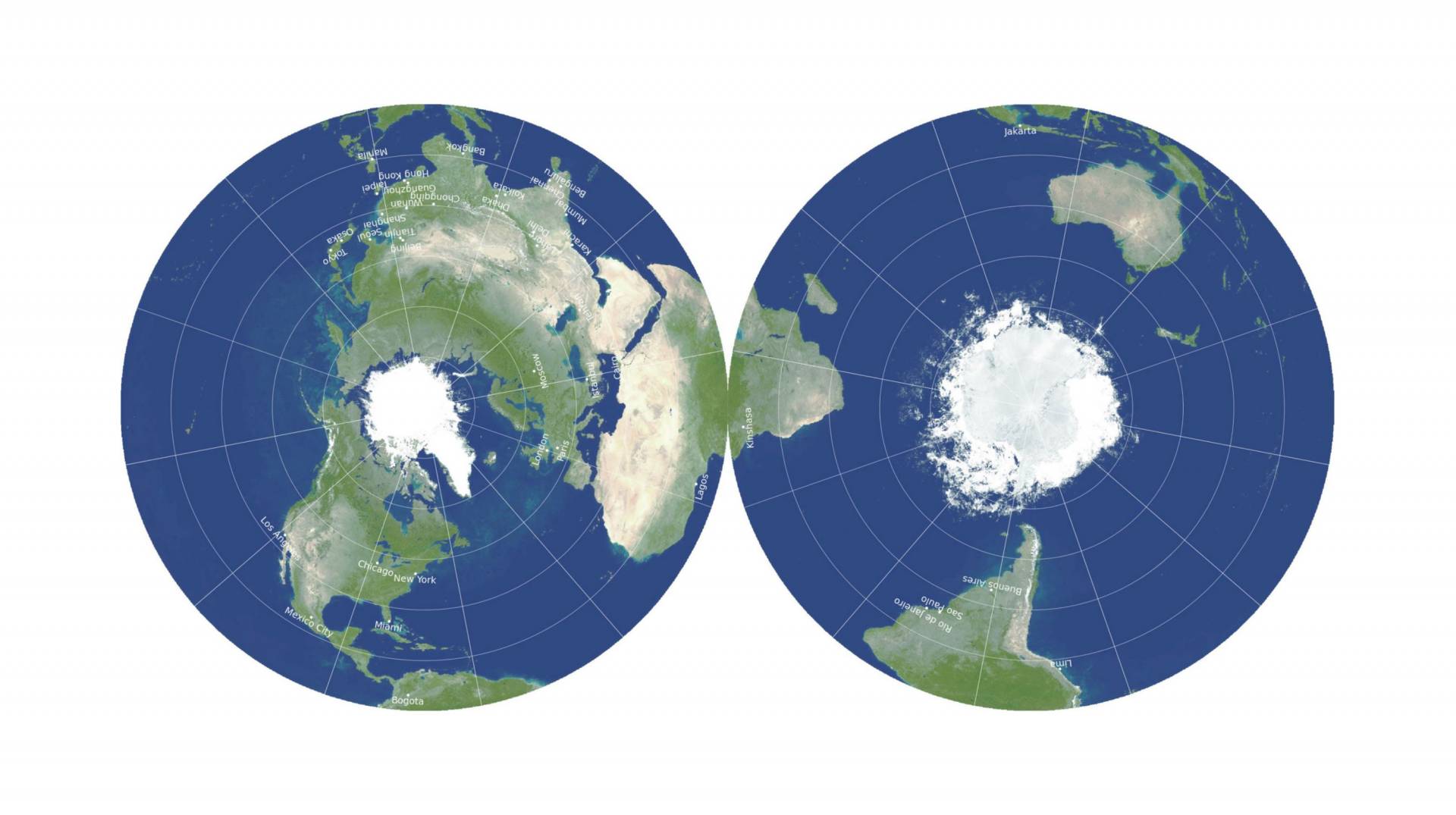 Gott, Goldberg and Vanderbei's revolutionary, double-sided disk map minimizes all six types of map distortions. They used an equidistant azimuthal projection: a compromise projection, like the Winkel Tripel, with small errors in both local shapes and areas, instead of optimizing one at the expense of the other. Antarctica and Australia are more accurately represented than in most other maps, and distances across oceans or across poles are both accurate and easy to measure, unlike one-sided flat maps. Goldberg-Gott error score: 0.881

The map can be printed front-and-back on a single magazine page, ready for the reader to cut out. The three cartographers imagine printing their maps on cardboard or plastic and then stacking them like records, to be stored together in a box or slipped inside the covers of textbooks.

To the best of their knowledge, no one has ever made double-sided maps for accuracy like this before. A 1993 compendium of nearly 200 map projections dating back 2,000 years did not include any, nor did they find any similar patents.

“Our map is actually more like the globe than other flat maps,” Gott said. “To see all of the globe, you have to rotate it; to see all of our new map, you simply have to flip it over.”

"Flat maps that improve on the Winkel Tripel," by J. Richard Gott III, David M. Goldberg and Robert J. Vanderbei, was published on Arxiv on Feb. 15. You can see and interact with their double-disk maps of Earth, Mars, Jupiter, the sun, and other heavenly bodies at this interactive tool on Vanderbei's website.