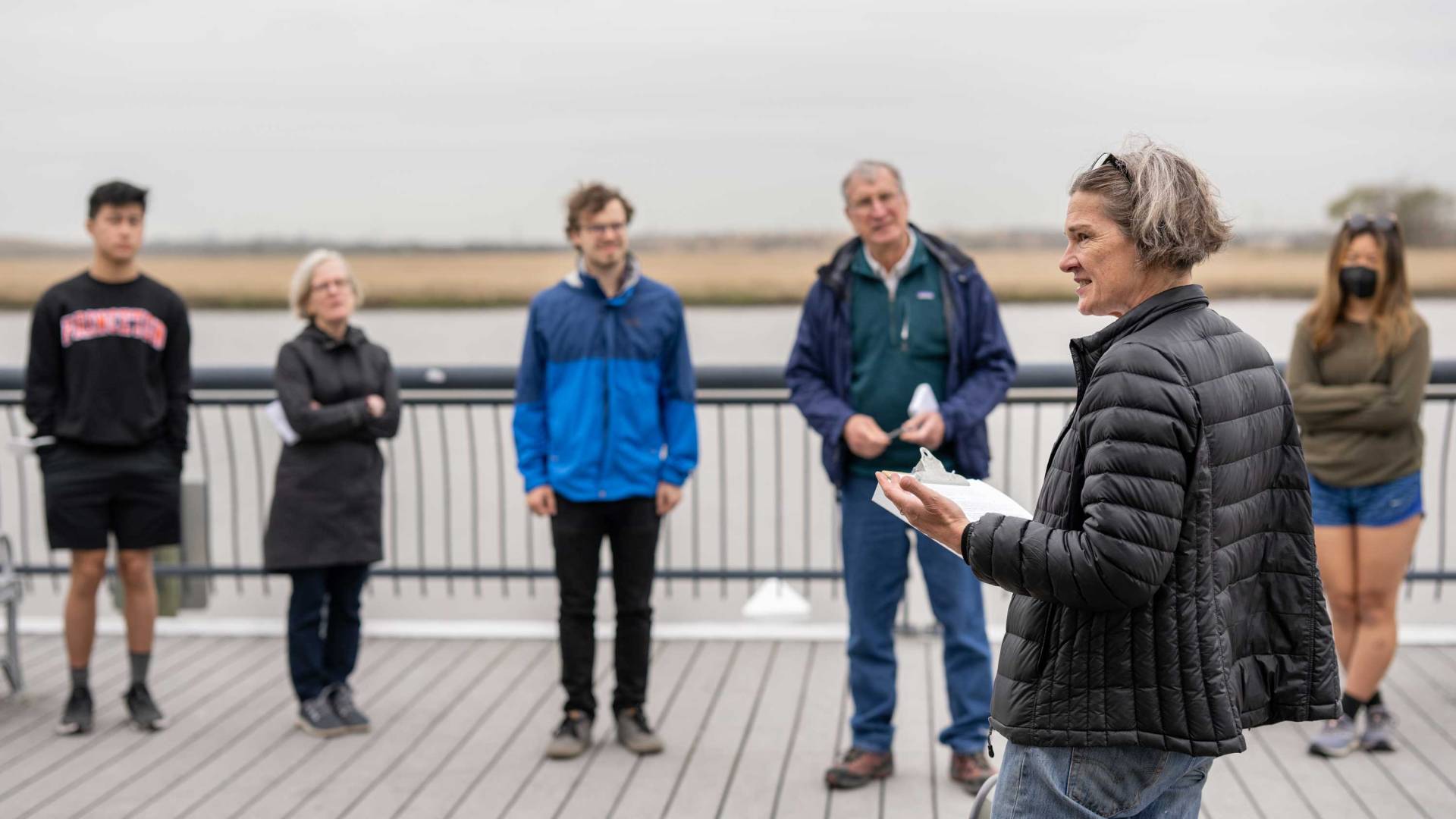 In 2012, Hurricane Sandy inundated Weber Avenue in Sayreville, New Jersey, with 18 feet of water. If climate change continues unabated, it will be underwater permanently in less than 100 years thanks to a predicted sea level rise of 4 to 8 feet.

Princeton researchers, students and community members visited the now-desolate street this week in two groups as part of the High Water Line: New Jersey, a public-facing project initiated and carried out by Christina Gerhardt, the Currie C. and Thomas A. Barron Visiting Professor in the Environmental Humanities in the High Meadows Environmental Institute (HMEI) and visiting associate professor in HMEI and the German department.

Most residents along Weber Avenue and the surrounding streets are long gone, having accepted buyouts offered through New Jersey’s Blue Acres program after Hurricane Sandy. The area is adjacent to the Washington Canal, which connects the Raritan and South rivers not far from Raritan Bay.

Gerhardt brought the groups to the site to physically mark where the Raritan is predicted to claim the surrounding area once sea level rise reaches 5 feet. Using a liner filled with blue-tinted, water-soluble chalk, they drew a line through the neighborhood, which borders township parks and facilities and where there are a few remaining homes.

“It depends on whether or not we get our act together and reduce carbon emissions,” Gerhardt said. If the planet warms further, she said, the impact will be more profound. 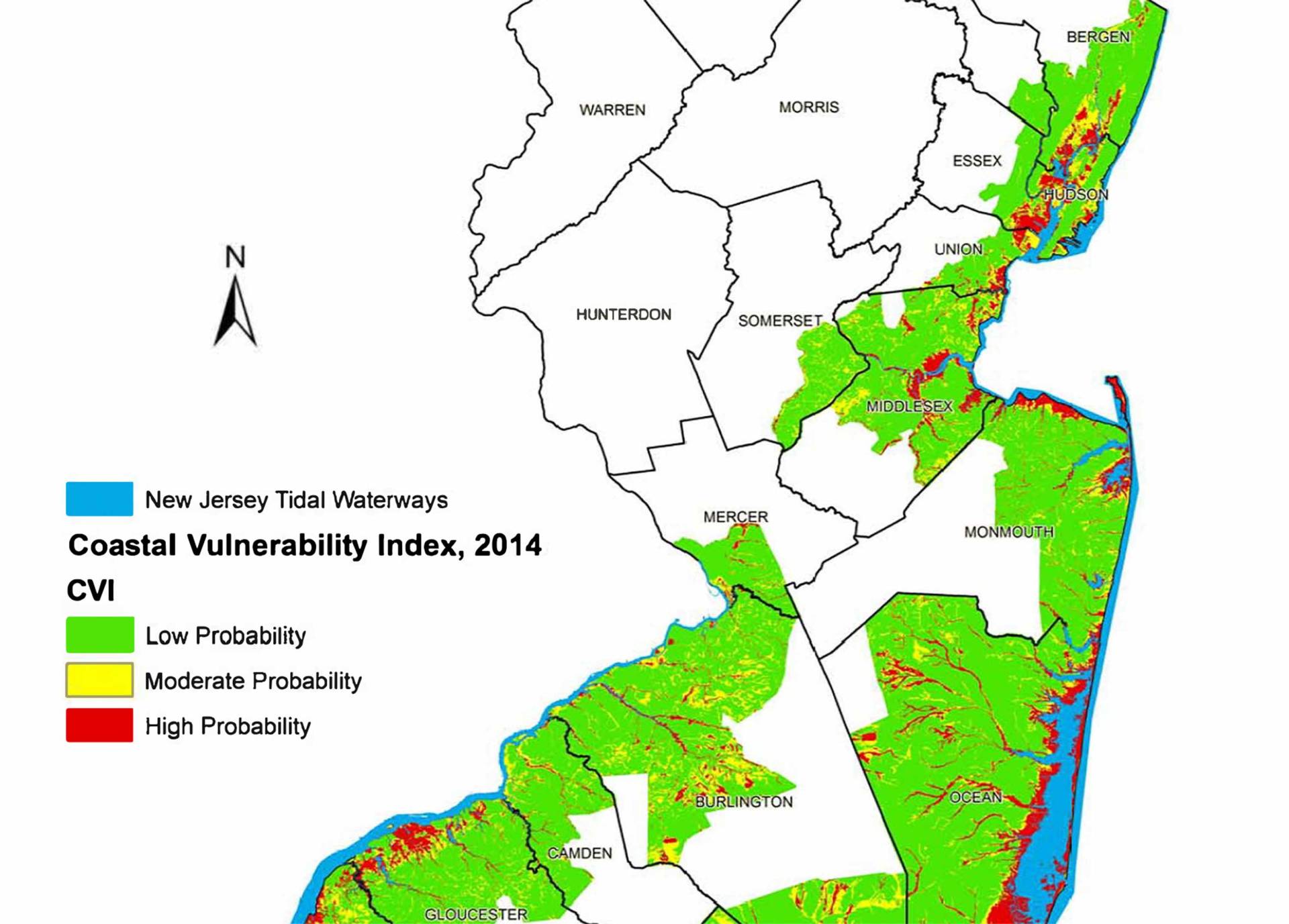 Through the High Water Line project, Gerhardt, founding director of Environmental Humanities at the University of Hawaii at Mānoa, is illustrating the impact of urban sea level rise. In doing so, she hopes to spark curiosity and engagement with the issue, she said.

Since arriving at Princeton in spring 2021, Gerhardt has worked with Climate Central, an independent organization of climate researchers and journalists, to create a map of the historic and future shoreline in the region using their Surging Seas software suite. Climate Central’s coastal mapping tool is available for public use to visualize how New Jersey’s coastlines will change with sea level rise.

Aaron Shkuda, program manager for the Princeton-Mellon Initiative in Architecture, Urbanism and the Humanities and lecturer in architecture, said this week's "walk-and-chalk" tours of the high water line, as Gerhardt calls them, are “like a living map. You’re moving through the space in order to understand it.”

The science on sea level rise is clear, but Shkuda said even he feels a weariness from climate change narratives. “You can talk about x number of feet of sea level rise, but when you actually see where the water might come from in the next five years, or decade, or 50 years, that makes it all the more real to people and can drive them to action,” he said.

In addition to mapping New Jersey’s future coastline — and that of Sayreville, in particular — Gerhardt researched the historical use of these lands, dating back to their pre-colonial inhabitants, the Lenni-Lenape. She mined the map archives at Princeton’s Firestone Library and at the New York Public Library and oral history archives, to give a better sense of the history of Sayreville, so that attendees understood how it came to be what it is and what might be lost.

Gerhardt also organized three expert panels to examine various aspects of the issue statewide, focusing on the science of sea level rise, the potential for art as a form of climate communication, and solutions.

[A permanent archive is available for the High Water Line: New Jersey featuring a video about the inspiration behind the project, recordings of the expert panel discussions, a downloadable map of the Sayreville walking tour and links to coverage.] 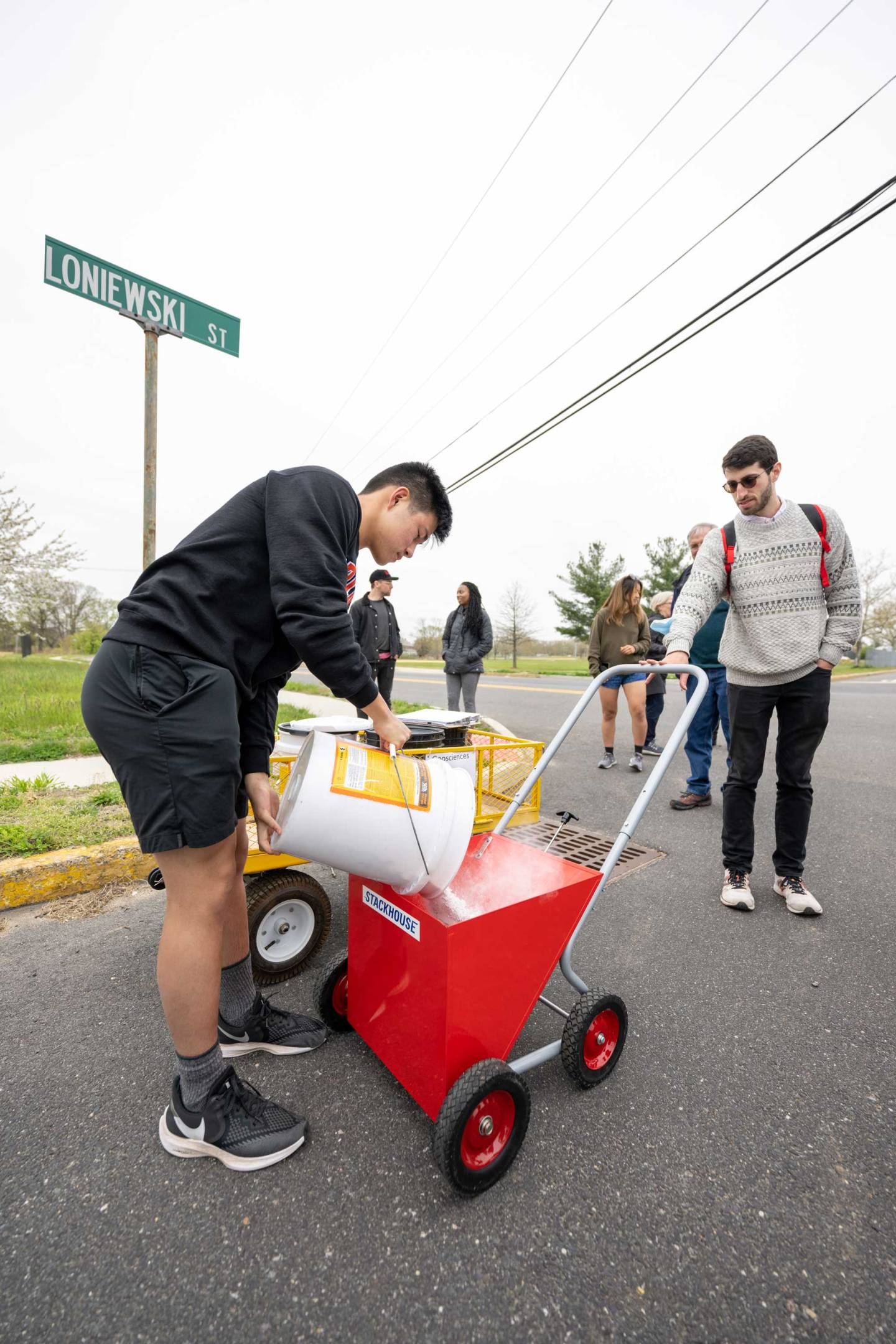 Anlon Zhu, a student in computer science, pours blue-tinted, water-soluble chalk into a liner, which participants in the High Water Line: New Jersey used to mark the line where water will reach in Sayreville when sea level rise hits 5 feet.

Gerhardt carried out a similar project in Honolulu in January 2020 called High Water Line: Honolulu. The art of the walks is inspired by environmental artist Eve Mosher and the history by the walking tours offered by Shaping San Francisco. Sayreville was chosen as the site of Gerhardt’s New Jersey walk-and-chalk tours to demonstrate the threat of sea-level rise facing low-lying riverside communities in addition to those along the coast.

“I had been thinking about how we can reach a broader audience with regard to sea level rise,” Gerhardt said. “I wanted participants to have a sense of the inundation, and I wanted people to be physically involved. So a walking tour, where we have different people take turns with this liner, seemed to be a really good way of getting into the space and visualizing the impacts of sea level rise, and combining it with history and thinking about how we came to where we are now, but also considering possible future solutions seemed important.”

The fates of people, waterways and ecosystems

The spot demonstrated how the fates of people, waterways and ecosystems are clearly intertwined. Gulls swooped over the open water and plentiful marsh grasses, while local fishermen pulled a boat up the loading dock.

Visible across the water was a landfill, a field of solar panels, and a weathered-looking power plant that not only supplies power to communities in New Jersey but also, through underground cables, provides 22 percent of Long Island’s power.

“This was all tidal wetlands,” Gerhardt said looking over the landscape, the built and natural environments intertwined. “The water likes to reclaim territory where it was previously.”

Gerhardt displayed an 1866 map that indicated where the wetlands once were along the river. She noted that there is a remarkable similarity between historic maps of coastal marshes and where sea level rise is predicted to occur.

Loss of coastal habitats, as well as critical infrastructure such as power plants, wastewater treatment facilities, bridges, roads, airports and shipping terminals are all possible with unabated sea level rise, she said.

“Sayreville may seem like a sleepy, small working-class community, but we should think about its connections to other communities,” Gerhardt said, highlighting its five power facilities and a wastewater treatment plant that serves 800,000 residents in 30 towns.

Its wetlands are home to over 200 species of birds, including migratory birds. Wetlands, in general, also serve the function of acting as carbon sinks, absorbing atmospheric emissions. Their loss only exacerbates climate change and its impacts, she said. 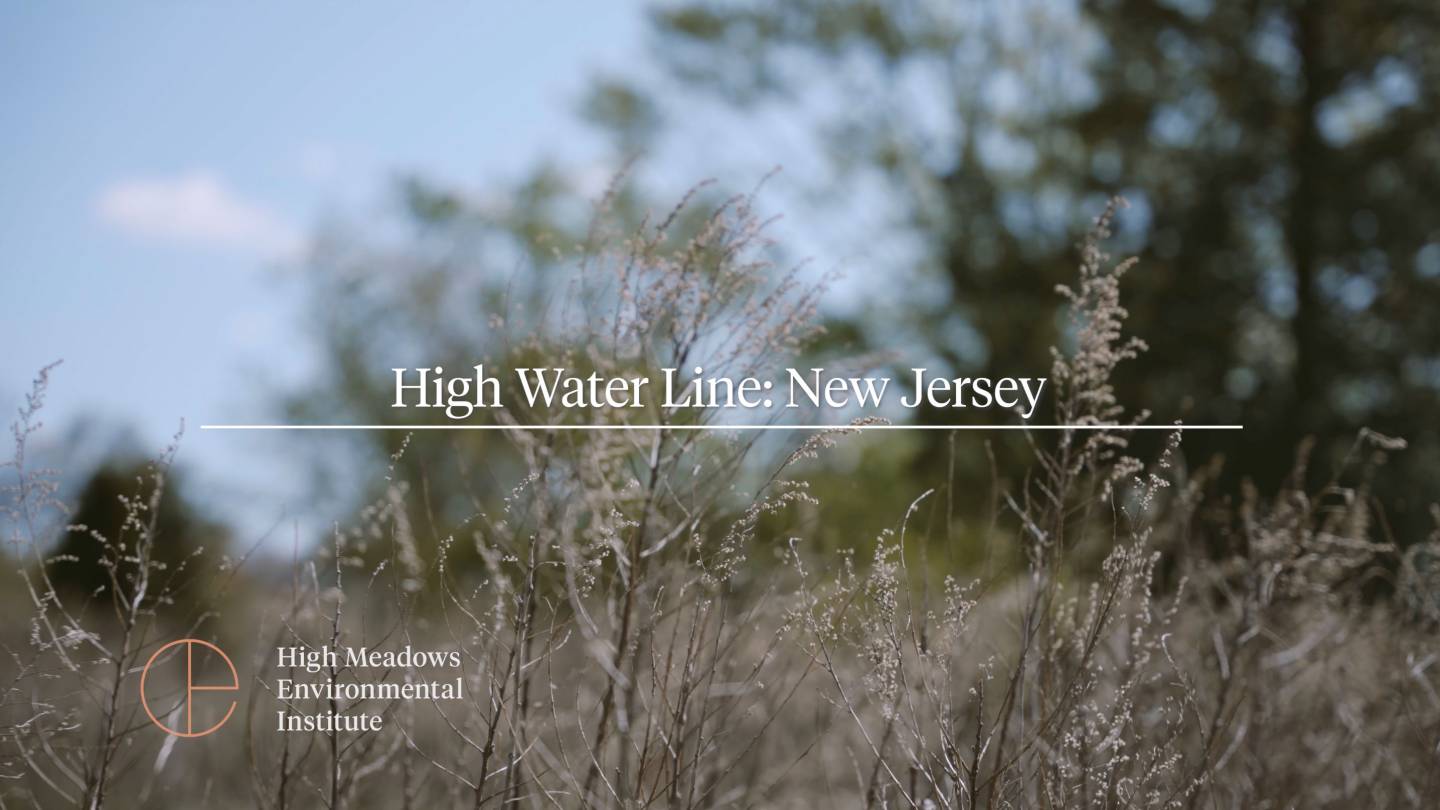 A short documentary captures the motivation and impact of the High Water Line: New Jersey project through interviews with Gerhardt and participants in the walk-and-chalk tours of the future coastline of Sayreville, New Jersey.

At the future water's edge

The walk continued to the Sayreville Municipal Building and War Memorial Park, which will likely sit overlooking the water’s edge in the coming century, before progressing to Weber Avenue and MacArthur Avenue.

Sayreville already has experienced a preview of unmitigated climate change with intensifying storms and rising seas. When Hurricane Sandy hit, it was the third year in a row the families along Weber Avenue had cleaned up from flooding. Some had barely recovered from Hurricane Irene in 2011.

The state allocated 361 buyouts at pre-flood values for homeowners in Sayreville as part of its Blue Acres program. One-hundred-and-forty-eight homeowners accepted those buyouts. The land will become permanent open space, once again providing a buffer from the river for the community.

Kirk Miick, Sayreville’s director of code enforcement and flood plain manager, said the borough was the first in the state to use the Blue Acres program to move such a large block of families. “People were ready to move,” he said. “They wanted out. Sandy was the coup de grâce.”

The borough already had been working with state officials to fulfill the residents’ desire to relocate prior to Hurricane Sandy. The neighbors, he said, even formed a group to advocate for themselves. “They wanted to be first. They wanted to be the model.”

Weber Avenue still has the identifying marks of any other suburban New Jersey street: sidewalks, blossoming trees, power lines and fire hydrants. But it is notable for what is missing — the houses. The only indication of where the homes once stood are their driveway aprons, ghostly mats of cracked cement split by grasses that are reclaiming the vacated lots.

“I don’t think people in this neighborhood need a wake-up call,” Gerhardt said. “This shows a successful example of managed retreat.”

Gerhardt encouraged her walking groups to imagine impacts on the remaining residents and to discuss solutions.

Historical connections to place can make it a big challenge to get people to leave, especially if a family has a history tied to the land that goes back generations. “Getting people to relocate as a group is complicated,” she said. “It can pull apart the fabric of a community.” 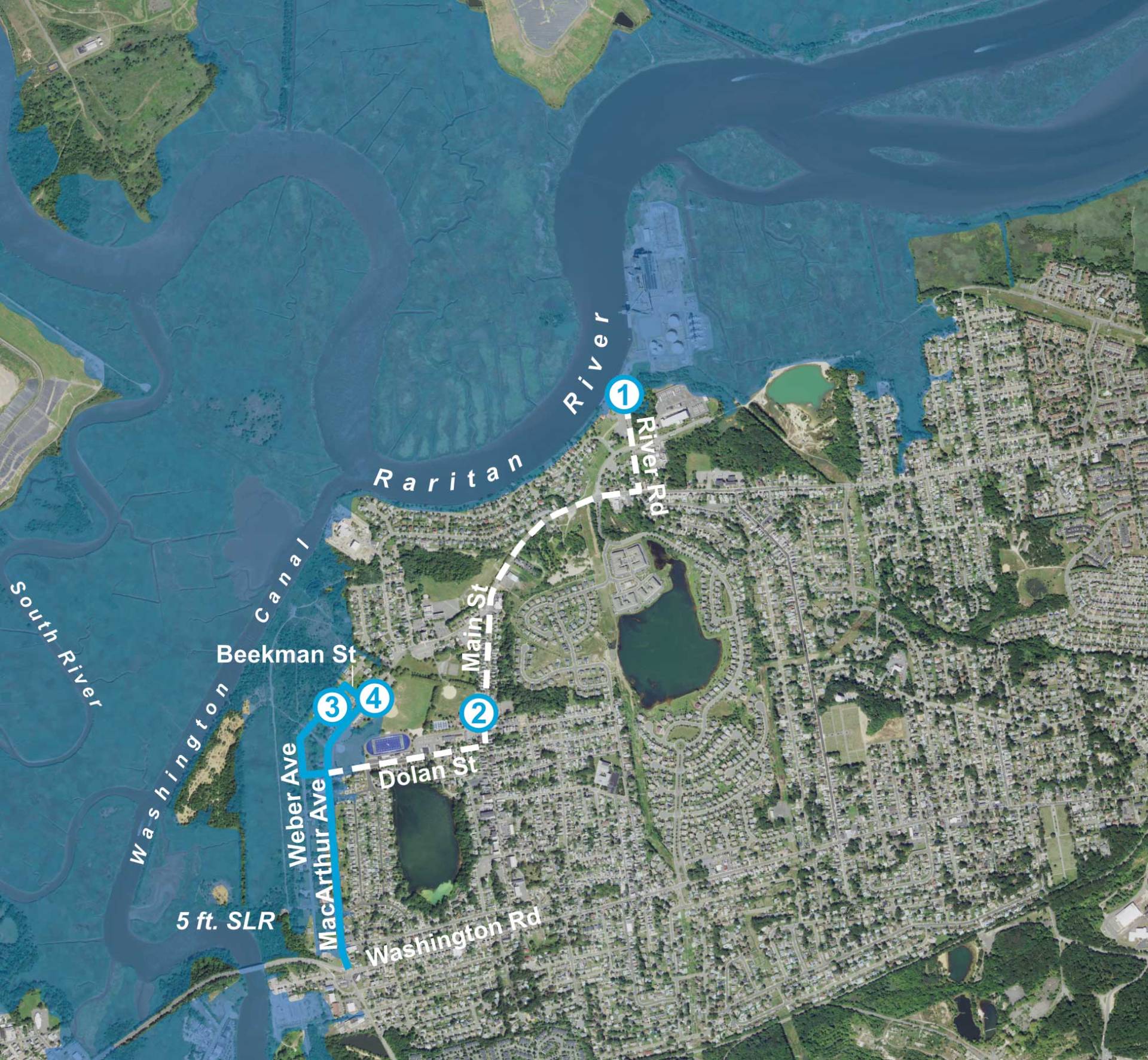 Gerhardt’s tour for the High Water Line: New Jersey began at 1) Ken Buchanan Riverfront Park overlooking the Raritan River. The group continued to 2) Sayreville’s Municipal Building and War Memorial Park, before walking to 3) the Weber Avenue open space created by New Jersey’s Blue Acres program, where they began chalking the outline of the expected coast within the next century. The line continued to 4) MacArthur Avenue, where homes and businesses remain.

Alison Isenberg, professor of history at Princeton and co-director of the Princeton-Mellon Initiative, said such questions as relocation are inherently historical, and that research such as Gerhardt’s is needed to inform engagement on these issues.

“I have taught and lived in central New Jersey for 21 years with an interest in environmental history and cultural landscapes, but Professor Gerhardt’s project has made visible to me the connected and historical vulnerabilities along the Raritan River,” Isenberg said. “When a scholar such as Professor Gerhardt has done the tremendous labor of identifying the sites, and doing the historical, scientific and policy research that applies, the experience of walking a landscape such as Sayreville’s can be an extraordinary experience for many people.”

Anlon Zhu, a first-year student in computer science who took Gerhardt’s course “Islands, Sea Level Rise and Environmental Humanities” this spring, said his classroom experience and the walk opened his perspective on climate change and the need for solutions.

“Being able to do a walk like this makes it tangible,” he said. “The physical engagement and seeing the people who will be affected by sea level rise cements that.”

Katharine Hackett, executive director of HMEI, said in some ways, the walk was daunting. “I’m trying to relate to the people who live here,” she said. “It must be overwhelming. The circumstances are distressing emotionally and the issues involved are incredibly complex.”

While researchers at HMEI are providing the modeling and science to make predictions that will help communities like Sayreville to plan ahead, it is the environmental humanities and projects such as High Water Line: New Jersey that are providing the opportunity to think about the human impact, Hackett said.

“It creates a narrative of what’s happening, and it’s an opportunity for our students to think about the complexity of how you solve world problems,” Hackett said. “This takes it out of a textbook in a compelling way. You can imagine, ‘if that was happening to me.’”