As greenhouse gas emissions continue to warm the world’s oceans, marine biodiversity could be on track to plummet within the next few centuries to levels not seen since the extinction of the dinosaurs, according to a recent study in the journal Science by Princeton University researchers. 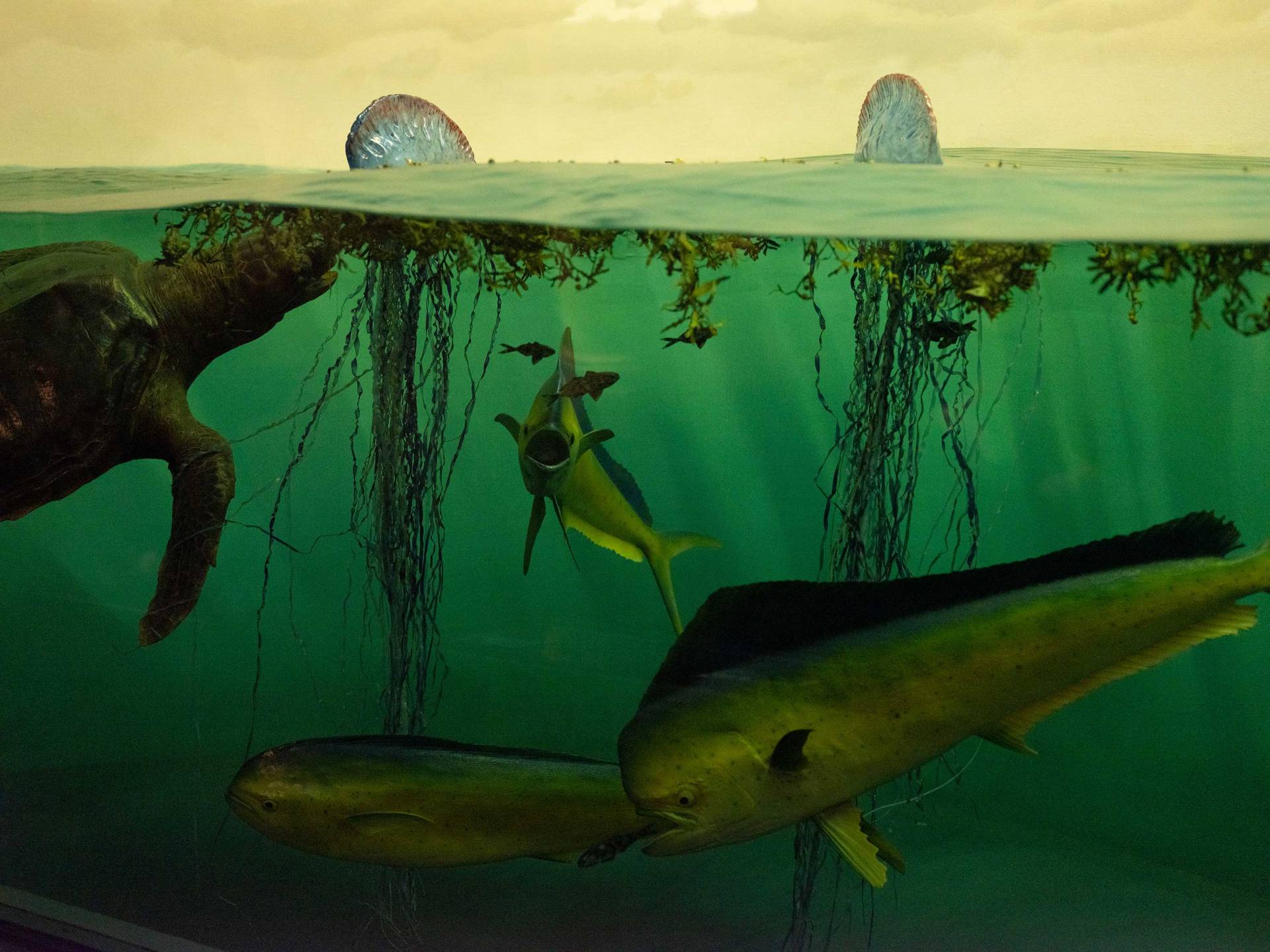 Princeton University researchers report that unless greenhouse gas emissions are curbed, marine biodiversity could be on track to plummet to levels not seen since the extinction of the dinosaurs. The study authors modeled future marine biodiversity under projected climate scenarios and found that species such as dolphinfish (shown) would be imperiled as warming oceans decrease the ocean’s oxygen supply while increasing marine life’s metabolic demand for it.

The paper’s authors modeled future marine biodiversity under different projected climate scenarios. They found that if emissions are not curbed, species losses from warming and oxygen depletion alone could come to mirror the substantial impact humans already have on marine biodiversity by around 2100. Tropical waters would experience the greatest loss of biodiversity, while polar species are at the highest risk of extinction, the authors reported.

“Aggressive and rapid reductions in greenhouse gas emissions are critical for avoiding a major mass extinction of ocean species,” said senior author Curtis Deutsch, a professor of geosciences and the High Meadows Environmental Institute at Princeton.

The study found, however, that reversing greenhouse gas emissions could reduce the risk of extinction by more than 70%.

“The silver lining is that the future isn’t written in stone,” said first author Justin Penn, a postdoctoral research associate in geosciences. “The extinction magnitude that we found depends strongly on how much carbon dioxide [CO2] we emit moving forward. There’s still enough time to change the trajectory of CO2 emissions and prevent the magnitude of warming that would cause this mass extinction.”

Deutsch and Penn, who initiated the study when both were at the University of Washington, combined existing physiological data on marine species with models of climate change to predict how changes in habitat conditions will affect the survival of sea animals around the globe over the next few centuries.

The researchers compared their model to past mass extinctions captured in the fossil record. They built on their earlier work that linked the geographic pattern of Earth’s deadliest extinction event — the end-Permian extinction about 250 million years ago — to its underlying drivers: climate warming and oxygen loss from the oceans.

The researchers found that their model projecting future marine biodiversity, the fossil record of the end-Permian extinction, and the distribution of species that we see now follow a similar pattern — as ocean temperature increases and oxygen availability drops, marine life abundance plummets.

Water temperature and oxygen availability are two key factors that will change as the climate warms due to human activity. Warmer water is itself a risk factor for species that are adapted for cooler climates. Warm water also holds less oxygen than cooler water, which leads to more sluggish ocean circulation that reduces the oxygen supply at depth. Paradoxically, species’ metabolic rates increase with water temperature, so the demand for oxygen rises as the supply decreases. “Once oxygen supply falls short of what species need, we expect to see substantial species losses,” Penn said.

Marine animals have physiological mechanisms that allow them to cope with environmental changes, but only up to a point. The researchers found that polar species are more likely to go globally extinct if climate warming occurs, because they will have no suitable habitats to move to. Tropical marine species will likely fare better because they have traits that allow them to cope with the warm, low-oxygen waters of the tropics. As waters north and south of the tropics warm, these species may be able to migrate to newly suitable habitats. The equatorial ocean, however, is already so warm and low in oxygen that further increases in temperature — and an accompanying decrease in oxygen — might make it locally uninhabitable for many species.

The researchers report that the pattern of extinction their model projected — with a greater global extinction of species at the poles compared to the tropics — mirrors the pattern of past mass extinctions. A study Deutsch and Penn published in Science in 2018 showed that temperature-dependent increases in metabolic oxygen demand — paired with decreases in oxygen availability caused by volcanic eruptions — can explain the geographic patterns of species loss during the end-Permian extinction, which killed off 81% of marine species.

The new paper used a similar model to show that anthropogenic warming could drive extinctions from the same physiological mechanism at a comparable scale if warming becomes great enough, Penn said. “The latitude pattern in the fossil record reveals the fingerprints of the predicted extinction driven by changes in temperature and oxygen,” he said.

The model also helps resolve an ongoing puzzle in the geographic pattern of marine biodiversity. Marine biodiversity increases steadily from the poles towards the tropics, but drops off at the equator. This equatorial dip has long been a mystery; researchers have been unsure about what causes it and some have even wondered whether it is real. Deutsch and Penn’s model provides a plausible explanation for the drop in equatorial marine biodiversity: the oxygen supply is too low in these warm waters for some species to tolerate.

The big concern is that climate change will make large swaths of the ocean similarly uninhabitable, Penn said. To quantify the relative importance of climate in driving extinctions, he and Deutsch compared future extinction risks from climate warming to data from the International Union for Conservation of Nature (IUCN) on current threats to various marine animals. They found that climate change currently affects 45% of the marine species at risk of extinction, but is only the fifth-most important stressor after overfishing, transportation, urban development and pollution.

However, Penn said, climate change could soon eclipse all of these stressors in importance: “Extreme warming would lead to climate-driven extinctions that, near the end of the century, will rival all current human stressors combined.”

“Avoiding ocean mass extinction from climate warming,” by Justin L. Penn and Curtis Deutsch, appears in the April 29 issue of Science (DOI: 10.1126/science.abe9039). The work was supported by grants from the National Science Foundation (OCE-1737282), the National Oceanic and Atmospheric Administration (NA18NOS4780167), California SeaGrant and Ocean Protection Council, and the UW Program on Climate Change.