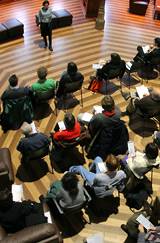 Above: Graduate student Sonia Velazquez, who helped coordinate the event, spoke to the crowd gathered in the Chancellor Green rotunda for the reading on March 8.

Left: Seniors Julia Ressler (left) and Indu Datta-Barua donned "armor" for their parts of the reading.

Several events celebrating the 400th anniversary of the great literary work "Don Quixote" have been taking place this week on campus.

A public reading, a film screening and an academic colloquium -- all under the title "Book Errant: 400 Years Reading 'Don Quixote'" -- were organized by the Department of Spanish and Portuguese Languages and Cultures and the Humanities Council.

At the reading Tuesday, March 8, in the Chancellor Green rotunda, University faculty and students presented a multilingual "galaxy of quixotic texts." Also part of the celebration was a showing on Wednesday, March 9, of the 1957 film, "Don Kikhot," directed by Grigori Kozintsev.

The academic colloquium will run from 4:30 to 6 p.m. Thursday, March 10, and from 9 a.m. to 5 p.m. Friday, March 11, in 101 East Pyne. Participants will include Princeton faculty members Marina Brownlee, Paul Firbas, Francisco Prado Vilar, Nigel Smith and Michael Wood, as well as scholars from other institutions.

The first part of Miguel de Cervantes' "Don Quixote" was published in 1604 and has been a bestseller since day one. The most published and translated book after the Bible, it has been described as the first great European novel, the first work of modern literature and the foundation of Latin American fiction. In 2002, the novel was voted the best book of all time by a group of 100 distinguished writers.

"'Don Quixote' is synonymous with the invention of the novel," said Marina Brownlee, the Robert Schirmer Professor of Spanish and Portuguese Languages and Cultures and comparative literature. "This beguiling book, which Faulkner read once a year and which Malraux saw as the most meaningful book for survivors of concentration camps, explores the meaning of history, the arts and technology -- of human nature itself -- in ways that speak to the 21st century as powerfully as they do to the 17th."

The book describes the journeys and adventures of Don Quixote, a knight errant, and his sidekick, Sancho Panza. "'Book Errant'" considers 'Don Quixote' and its intriguing legacy in verbal, visual and filmic expressions from the first 400 years," Brownlee said.

For more information, contact the Department of Spanish and Portuguese Languages and Cultures at (609) 258-7180 or visit spo.princeton.edu.