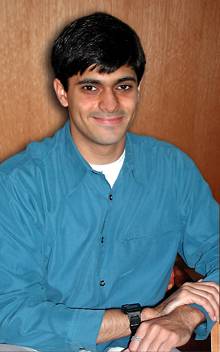 James R. Williams, a Princeton junior majoring in the Woodrow Wilson School of Public and International Affairs, has been named a 2005 Truman Scholar by the Harry S. Truman Scholarship Foundation. The award, which provides $30,000 for graduate study, recognizes leadership potential, intellectual ability and commitment to public service.

Williams, who is from Portland, Ore., is the chair of the Student Volunteers Council, Princeton's largest student organization, and is an officer of the Religious Life Council, an interfaith group sponsored by the University’s Office of Religious Life. This past fall, he received the Wilson School's R.W. van de Velde Award for outstanding work in a public policy task force on U.S. election reform.

He also works with Campus Compact, a national nonprofit organization dedicated to promoting civic engagement in higher education, and was co-editor of a book published by Campus Compact titled " Students as Colleagues: Expanding the Circle of Service-Learning Leadership."

Williams, whose interests include education and environmental issues, intends to go to law school and then return to Portland to work with nonprofit organizations and elected officials. He eventually plans to run for elected office.

While attending Princeton, Williams has returned to Portland each summer to run a program that helps high school students develop knowledge and skills to deal with education funding and curriculum issues. His work has been funded through scholarships from the Student Volunteers Council.

As a high school student, Williams represented 55,000 students on Portland's school board and founded Students for Oregon's Schools, a statewide activist organization dedicated to adequate and stable school funding. His interest in public service began early -- he served as an intern at Portland's City Hall at 13 years old.

"I learned a lot about politics and saw a range of possibilities, especially the need for vision and leadership in the public sector," Williams said. "I felt that the public interest was my calling and I could be effective directly engaging with the political process."

The 2005 Truman Scholars will assemble May 16 for a week-long leadership development program at William Jewell College in Liberty, Mo., and receive their awards in a special ceremony at the Truman Library in Independence, Mo., on May 22.