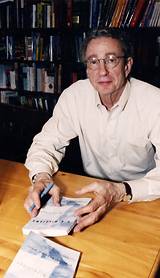 Princeton faculty member and prolific poet C.K. Williams has been awarded the 2005 Ruth Lilly Poetry Prize, one of the highest honors given to American poets.

Williams, a lecturer with the rank of professor in the Council of the Humanities and the Program in Creative Writing, will be presented with the $100,000 award at a ceremony May 24 in Chicago . The prize, established in 1986, is one of the largest literary honors for work in the English language.

"C.K. Williams is a master at dramatizing complicated psychological states, but he is also always equally concerned with the self's relation to the larger world. He has created a signature style, which more and more seems a permanent part of our literature," Christian Wiman, editor of Poetry magazine and chair of the selection committee, said in announcing the award.

Williams is the author of nine collections of poetry and the recipient of multiple awards, including the 2000 Pulitzer Prize for poetry for "Repair"; the 2003 National Book Award for "The Singing"; the 1987 National Book Critics Circle Award for "Flesh and Blood"; the 1998 PEN/Voelker Career Achievement in Poetry Award; and the 1999 American Academy of Arts and Letters Award in Literature.

"A C.K. Williams poem works like a joint venture between place, often a place as distinctly unromantic as an auto graveyard, and the state of mind observing the place. Invariably, the collaboration brings us to a more nuanced understanding of what it is to be human," said John Barr, president of The Poetry Foundation.

The Ruth Lilly Poetry Prize honors a living U.S. poet whose lifetime accomplishments warrant extraordinary recognition. The annual prize is sponsored and administered by The Poetry Foundation, publisher of Poetry magazine. Yusef Komunyakaa, a professor in the Council of the Humanities and creative writing at Princeton, was awarded the prize in 2001.