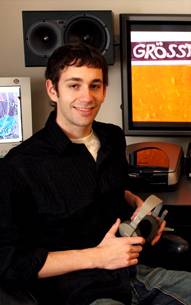 Benjamin Good, shown in the Language Resource Center, has immersed himself in German.

Benjamin Good did not know German when he started at Princeton, but he now has read hundreds of pages in the language as research for his senior thesis. And that’s not the end of it — he plans to move to Berlin after he graduates to delve even further into his thesis topic.

As a freshman, Good thought he would likely concentrate in politics or economics, but on a whim he decided to “try something new” and enrolled in the accelerated language track in German. It was a choice that would shape his entire undergraduate experience and open up unforeseen opportunities.

At the end of his freshman year, Good went to Munich with the German department’s month-long summer program for intensive language study at the Goethe Institute. The Princeton professor on the trip was Michael Jennings, the chair of the German department, who quickly became an important mentor to Good, including serving as his senior thesis adviser.

Good said that his experience in Munich — from reading Kafka’s “Metamorphosis” in German to making new friends and being in Europe for the first time — prompted him to spend his entire sophomore year in Germany, this time in Berlin.

Through the Berlin Consortium for German Studies, Good took classes with a group of about 12 students from other American universities at the Freie Universität Berlin. His politics and literature courses often included opportunities to make public presentations in German, which he said “were a lot of pressure but offered experiences you need when learning a language.”

A particular boost to Good’s proficiency with German came from spending his first month in Berlin living with a host family, before moving into an apartment of his own. He said he found it easy to meet Germans his age in a city that has several large universities.

From his peers, Good learned about German literature and culture, all the while becoming increasingly fascinated by how language works. “Living in the German language foregrounded the linguistic aspect of my existence,” he said. This awareness led to other discoveries, most significantly the work of the Austrian modernist writer Robert Musil, whose unfinished three-volume novel “The Man Without Qualities” is a focus of Good’s thesis.

On his return to Princeton for junior year, Good became one of nine majors in the German department. “I felt really welcomed by the department,” he said, finding its emphasis on critical theory to be an ideal match for his own intellectual pursuits.

Good has a wide-ranging and cross-disciplinary approach to his work. For his junior paper, he wrote about pornography and violence in German conceptual art, literature and philosophy. He was advised by German professor Brigid Doherty, who also teaches in the Department of Art and Archaeology.

Good’s senior thesis is written in English with numerous translations of his own from German sources. He said that it “traces the implications of the modernists’ attempted break with traditions of the past — from Nietzsche to Musil — concluding that this perceived rupture in time became a figure of obsession in the modern literary tradition, which ultimately wreaked havoc on the literary conceptions of the body, the environment and history.”

He became occupied by such ideas when reading “The Man Without Qualities,” which he described as a “mystery to many critics because it is written in the style of hundreds of short essays that combine philosophic and literary discourse.” Reading Musil led Good to Nietzsche, one of Musil’s main influences, and then on to the work of Musil’s contemporaries such as Rainer Maria Rilke and Wallace Stevens. Courses that introduced Good to some of these writers were “Nietzsche and Modern European Literature” taught by Jennings and “Modern American Poetry” taught by Daniel Blanton, an assistant professor of English.

“Ben is, quite simply, the best and most original close reader I’ve encountered in 25 years of teaching Princeton undergraduates,” said Jennings. “I fully expect his senior thesis to be one of the finest produced in the German department in the last 20 years.”

Good had the opportunity to return to Germany and start to formulate his senior thesis topic during the summer before his senior year, when he spent two months in Mainz working as an intern with ZDF, one of Germany’s main television networks. He arranged the internship through the German department’s Summer Work Abroad Program.

Based in the department of a lively and colorful midday news program, Good said he “got to do a bunch of things because they weren’t entirely serious.” This included writing material for an interview with an ice skater who was trying to become an actress, and learning how to use digital splicing equipment. He also wrote one-page articles for the program’s Web site on topics such as preparing your house before taking a vacation, and burnout syndrome. A major plus was working with two other interns Good’s age who helped correct his German and build his vocabulary. “ZDF was perfect,” said Good. “People say if you want to learn a foreign language, watch TV. Here, I was helping make TV.”

After he graduates, Good anticipates returning to Berlin to do more research on Musil and expanding his project to include questions about changes in human perception — with an emphasis on photography — between 1900 and 1940. This spring, he will hear if he has received a Fulbright or a DAAD (German Academic Exchange Service) fellowship that will fund his research there. After the year in Germany he expects to attend graduate school, but only after working on his French or starting a new language — maybe Arabic.

Mixing it up: Rankin uses range of methods to pique interest in German