Anderson receives Luce Scholarship to live and work in Beijing 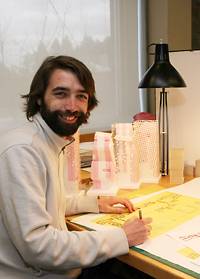 Anderson, who earned his master's degree in architecture May 31, will be employed by the Institute of Urban Planning and Design at Tsinghua University.

The Luce Scholars Program, administered by the Henry Luce Foundation, annually provides stipends and internships for 15 young Americans to live and work in Asia. Dating from 1974, the program aims to increase awareness of Asia among future American leaders.

Anderson, formerly of Seattle, Wash., and now a resident of New York City, earned a bachelor’s degree in architecture from Columbia University in 1998. He has a longstanding interest in urban planning and development, and hopes the scholarship will provide him with an apprenticeship of sorts in an urban context that is culturally and historically different from that of the United States.

"Recent economic developments have contributed to huge growth in many Asian urban centers," he said. "Urban planning and development in these cities must address a host of problems of a scale and scope that cities in the United States have not yet encountered."

In 1995, Anderson co-founded the Center for Urban Pedagogy, a nonprofit research-and-design office that seeks to educate citizens about community and urban planning, urban studies, political uses of architecture and related issues. From 1996 to 2002, he was a project manager at the Brooklyn-based organization. He helped create and organize many of the nonprofit's exhibitions and installations, which were showcased at museums and other venues throughout New York City. Since 2001, he has served as secretary, treasurer and board member for the center.

After earning his bachelor's degree, Anderson spent three years at the Alliance Builders Corp. in New York City, where he held the posts of chief estimator, project manager and network manager. He also has been an instructor at the Brooklyn Center for the Urban Environment and a volunteer instructor for Art Start's Art in the Shelters program.

At Princeton, Anderson served as an assistant-in-instruction in the School of Architecture and as a summer research assistant for two architecture professors.

After he returns from Asia, Anderson expects to continue his work with the Center for Urban Pedagogy and to pursue a career in architecture with a New York firm.

Liu is director of new Princeton Center in Beijing