Juan González, shown talking with Sarah-Jane Mathieu, an assistant professor of history and African-American studies, said it is important for prospective Princeton students "to not only be open to people of diverse cultures and backgrounds, but to be open to a diversity of experiences from people of similar cultural and ethnic backgrounds."

Below left: Alan Liu is studying molecular biology and finance, but still finds time to engage in many activities, such as rock climbing, sprint football and tutoring other students in economics and calculus.

Bottom left: Chemical engineering major Stephanie Malone has enjoyed challenging subjects in the classroom and the lab at Princeton, while also finding new extracurricular passions such as rugby and karate. 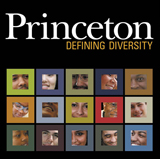 A new book highlights people and programs that help Princeton maintain a distinctive educational environment for students from a broad range of cultural, ethnic and economic backgrounds.

The book, "Defining Diversity," includes profiles of 15 Princeton students and recent alumni representing an array of backgrounds and academic and extracurricular interests. It also focuses on Princeton's academic and cultural resources, residential and social life and opportunities for civic engagement.

Students profiled in the book described their decisions to enroll at Princeton and their experiences in exploring differences among their peers while discovering much in common with fellow students from other backgrounds.

"Being from a neighborhood in California exposed to mostly people of African-American, Asian-American and Mexican-American descent, my decision to come to Princeton was based on gaining access to an entirely different group or groups of people," said Juan González, a Los Angeles native in the class of 2006 who is majoring in politics.

"I wanted to challenge myself and be in an environment far from home and far from what I was used to on a socioeconomic and cultural level," Gonzales said. "All the Ivy League schools presented this opportunity, but Princeton offered something more, such as the senior thesis. (If I could write a thesis, I thought, I could do anything!) It also offered a smaller campus environment (but not too small), a strong campus feel and the chance to make lasting and powerful friendships." 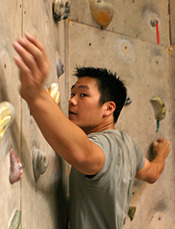 Alan Liu, a rising senior from Cupertino, Calif., who is majoring in molecular biology, noted that the diversity of Princeton's student body extends beyond racial and geographic differences.

"From adamant libertarians to die-hard environmentalists, from aspiring politicians to aspiring tap dancers, from harp-playing anthropologists to varsity wrestling aerospace engineers, this school has an eye-opening, mind-blowing, jaw-dropping mix of incredible individuals," he said.

"Defining Diversity" was produced for the University's admission office by the Office of Communications and is intended primarily for prospective students. The book is available online.

Stephanie Malone, a chemical engineering major, emphasized in her profile that attending Princeton has enabled her to tackle challenging academic subjects as well as unexpected extracurricular pursuits. Malone, a member of the class of 2006 from Fairview Heights, Ill., said her advice for prospective students is to "think about trying new things. It's good to get out of your comfort zone."

"I never would have thought I'd end up playing rugby! I never thought I'd do karate either, but both have been amazing," she said. "You never know what you're going to do until you come!"

Gonzalez appointed associate dean of the college, will focus on access and inclusion