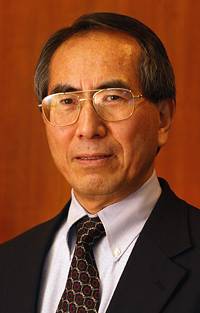 Photo courtesy of the Department of Electrical Engineering

Princeton professor of electrical engineering Hisashi Kobayashi has been selected to receive the 2005 Technology Award of the Eduard Rhein Foundation for his role in inventing techniques that allowed dramatic increases in the storage capacity of computer hard disks.

Kobayashi, who is Princeton's Sherman Fairchild University Professor of Electrical Engineering and Computer Science, will share the award with François Dolivo and Evangelos Eleftheriou of the IBM Zurich Research Laboratory.

The Rhein Foundation will present the award, which is one of the highest honors in the field of information technology, at a ceremony to be held at the Deutsch Museum in Munich, Germany, on Oct. 15.

The award honors Kobayashi for the conception and analysis of a data storage technique now known as PRML, which he published in 1970 and 1971. The PRML method allows more data to be stored on computer hard disks than the conventional recording method and retrieves stored data with fewer errors. During the following 20 years, Dolivo and colleagues perfected Kobayashi's ideas, allowing IBM to introduce a hard disk drive using PRML in 1990 and leading to a number of years in which storage capacity increased by about 50 percent each year. This technology is now widely adopted as the industry standard in personal computers and MP3 players such as the iPod. Eleftheriou is recognized for the invention of further improvements that have been applied to IBM disk-drive products since 2000.

Kobayashi received his Ph.D. from Princeton in 1967 and went to work as a research staff member at IBM's Thomas Watson Research Center, where he conducted this seminal research on data storage techniques. After a distinguished career at IBM, Kobayashi returned to Princeton in 1986 as dean of the School of Engineering and Applied Science. He served as dean through 1991, when he assumed full-time teaching and research duties in the Department of Electrical Engineering.

The Eduard Rhein Foundation has honored outstanding achievements in technology since 1979. Recipients of its Basic Research or Technology Award have included the leading figures in fields of computers and communications, such as Claude Shannon, the father of modern information technology, and Tim Berners-Lee, who created the World Wide Web. Another Princeton professor, Ingrid Daubechies of mathematics, received the 2000 Basic Research Award.