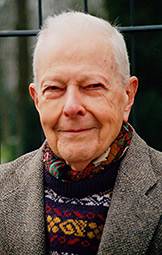 Forman Sinnickson Acton, a Princeton University professor of computer science, emeritus, who witnessed and helped pioneer the evolution of his field from its early days as a branch of mathematics to a stand-alone discipline that has revolutionized society, died Feb. 18, at age 93.

Acton, whose early career included work on the Manhattan Project, combined training in engineering and applied math to develop an expertise in computational mathematics — the science of automating complex calculations in accurate and efficient ways. Acton honed these skills in the 1950s working on military weapons systems by finding practical ways to make the world's first digital computing machines solve mathematical problems that were far too arduous to do by hand.

"A lot of computation was done, a lot of calculations, simulating air flow over a wing or simulating a bomb," said Andrew Appel, the Eugene Higgins Professor of Computer Science and chair of the computer science department at Princeton. "In the 1950s that kind of work was at the heart of computer science, and Forman was a real pioneer."

"He was at the right time and right place to do astounding things," said Adam Rosenberg, a former student of Acton's at Princeton.

Acton was born in 1920 in Salem, N.J., where ancestors in the Sinnickson and Acton families had lived since the 1600s. He attended Philips Exeter Academy and then Princeton, where he earned a bachelor's degree in engineering in 1943 and a master's in chemical engineering in 1944. After serving briefly as an instructor of mathematics at Princeton, Acton was drafted in the U.S. Army as a private and assigned to the Manhattan District Engineers at Oak Ridge, Tenn. He became part of a small team running a plant that separated uranium into isotopes needed for the first atomic bomb.

After World War II, Acton earned a doctorate in mathematics at the Carnegie Institute of Technology. He went to work for the Institute for Numerical Analysis of the National Bureau of Standards, located on the campus of the University of California-Los Angeles. There he worked on a machine called SWAC (Standards Western Automatic Computer), one of the first digital computers. Luminaries including physicist Richard Feynman (whom Acton called "one of the smartest pupils I ever had") attended summer sessions at the institute to learn about emerging computing techniques.

In 1952, Acton returned to Princeton to direct the Analytical Research Group, a part of the mathematics department located on the University's Forrestal Campus, where the group worked on military weapons. While contributing to systems such as the U-2 spy plane and the Nike missile (the first anti-aircraft missile), Acton became an expert in using and teaching others to use another of the very first computers, the IAS Machine, located at the Institute for Advanced Study. The room-sized computer was often called the von Neumann machine for mathematician John von Neumann.

During this time, Acton worked with other important figures in early computing including Princeton Professor John Tukey, who coined the terms "software" and "bit," and Thomas Kurtz, who earned a Ph.D. in mathematics in 1956 and went on to co-invent the computer language BASIC.

In an oral history transcript at the Archive Center of the Smithsonian's National Museum of American History, Acton told of going with Tukey, who was known as a formidable calculator, to visit von Neumann. "I sat quietly in the corner of the office for about three-quarters of an hour while Tukey sat there, his back to the wall, sweating and trying to keep up with von Neumann," Acton said. "It was great fun. I didn't understand what they were talking about, but that didn't make any difference."

Acton moved from mathematics to the Department of Electrical Engineering in 1955 and was appointed an associate professor in 1956. In 1963, Acton made the first of two extended visits to the Indian Institute of Technology at Kanpur, India, where he helped establish the school's early computing facilities and courses.

As computing grew in importance, the electrical engineering department added "computer science" to its name and then split, making the Department of Computer Science a stand-alone department in 1985. Acton retired as professor of computer science in 1989.

For much of the latter part of his career, Acton was known as a masterful teacher who avoided deeply theoretical approaches to problems in favor of practical methods. In 1970, he published a book titled "Numerical Methods that Work."

"He had a sense of humor about it," Appel said, noting that the original book cover had the title embossed in gold letters but also the word "Usually" embossed in uncolored letters before the word "Work."

"He was really interested in what worked and what didn't work," said Kenneth Steiglitz, the Eugene Higgins Professor of Computer Science, Emeritus. "He wasn't so much a theoretician as someone who accumulated wisdom about computing for a very long time. If I had something that didn't work, Forman was the guy I went to."

After retiring, in 1990, Acton edited a second edition of his 1970 book, and in 1997, published "Real Computing Made Real: Preventing Errors in Scientific and Engineering Calculations."

Acton attributed his start as a teacher to a day when he undiplomatically complained to Luther Eisenhart, former math department chair and then-dean of the faculty. "I asked him when he was going to start teaching math so engineers could understand it," Acton said in the Smithsonian transcript. Eisenhart instantly appointed him an instructor of math with a course assignment starting in two weeks.

Rosenberg, who graduated from Princeton in 1978 and became a lifelong friend of Acton, recalled him as a teacher who translated experience working on very hard problems into "being an exquisite teacher of the things that he learned."

Rosenberg recalled Acton drawing on a napkin at a restaurant to explain the nuances of a method of sorting random data into an ordered list. "He drew pictures of binary trees with branches and roots and showed me how the method worked, why it worked, and why it was often better than some methods and sometimes worse than others," Rosenberg wrote in a memorial blog post.

"Fifteen minutes with Forman and I got it," Rosenberg said.

Acton also was known as a world traveler and lover of food, fine wine and classical music.

"He had a lot of style," Steiglitz said.

Acton is survived by several cousins. Donations in his honor can be made to the Forman S. Acton Memorial Education Fund, care of J. Herbert Fithian, trustee, 83 Hospital Road, Bridgeton, NJ 08302.