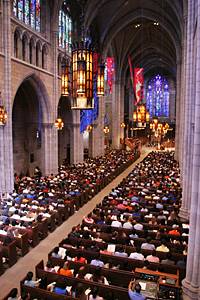 Undergraduate and graduate students and their families, faculty and staff filled the University Chapel for Opening Exercises, the interfaith service that traditionally marks the beginning of the academic year. 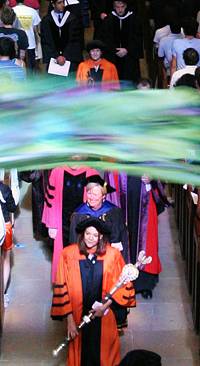 Princeton President Shirley M. Tilghman exited the chapel following the ceremony under the banner of a colorful kite and led by mace bearer Sandra Bermann, professor and chair of comparative literature. During her address, Tilghman encouraged new students to take a bold approach to their education and to make the most of opportunities.

At left: Honored for their academic achievements by Dean of the College Nancy Malkiel (back row, left) were (from left) Joshua Brodie, Catherine Kunkel, Amirali Shanechi, Jessica Gasiorek and Tamara Broderick.

Bottom left: After Opening Exercises, members of the class of 2009 participated in a "pre-rade" from the chapel through FitzRandolph Gate, giving them the opportunity to officially enter the campus to start their undergraduate experience and to be greeted by fellow students. The event is intended to foreshadow the P-rade of Princeton's annual alumni Reunions.

"This is traditionally a festive occasion, in which we anticipate the year ahead, filled as it is likely to be with the discovery of new friendships, the understanding of new problems and new insights into old ones," she said in greeting the audience at Princeton's Opening Exercises on Sunday, Sept. 11. "However it is impossible to wholeheartedly celebrate in light of the tragic events that have been unfolding in Louisiana, Alabama and Mississippi in the wake of Hurricane Katrina. The degree of devastation and the magnitude of the human suffering is staggering and beyond my comprehension.

"As we gather on this beautiful and secure campus, we are mindful of the thousands of students, teachers and faculty who are displaced from their own beloved schools, colleges and universities, and our own students from the Gulf Coast whose families have lost everything in the hurricane," she said.

She welcomed the displaced students from universities and colleges in New Orleans who are enrolling at Princeton. The University expects to admit and provide housing for a number of these students by the time classes start on Thursday, Sept. 15. "I hope that you will find at Princeton a safe haven in which to regroup and move forward, as well as to continue your education," she said.

Tilghman also noted that the Opening Exercises coincided with the fourth anniversary of the Sept. 11 terrorist attacks. She encouraged the audience to use the occasion as "an opportunity to recommit ourselves to the principles of free inquiry and mutual respect that represent our strongest answer to the forces of intolerance, to those who would assert that differences -- be they racial, ethnic, religious or philosophical -- are something to be feared."

The University Chapel was filled with undergraduate and graduate students and their families, faculty and staff for the interfaith service, which began with a procession of faculty and administrators in their academic regalia. Leading the group were people flying colorful kites on poles and playing African drum music. As part of the event, undergraduate students were recognized for their academic achievements during the previous year. 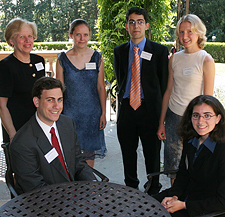 In her address, titled "Becoming a Princetonian," Tilghman focused on members of the freshman class.

She explained to the class of 2009 that the goal of a Princeton education is to prepare them to be leaders in the 21st century -- but that does not necessarily mean becoming presidents and chief executive officers.

"A leader is someone who has that powerful combination of determination, intellect and strength of character to make a positive difference in the world," Tilghman said. "A leader can be a teacher who inspires students in a first-grade classroom to love learning, or a doctor who cares for the indigent, or an engineer who devises a new technology that connects remote African villages to the Web. What sets leaders apart from others is their ability to get things done, to put the needs of others before their own, and to accomplish both with a finely calibrated ethical compass."

She reminded the freshmen of the University's informal motto, "Princeton in the nation's service and in the service of all nations," warning them that "the Princeton ideal of leadership is not for the weak of heart."

Tilghman encouraged the students to take a bold approach to their education and to make the most of opportunities. "Princeton can be a four-year way station between adolescence and adulthood or it can be the defining years of your life, upon which you will look back and say, as so many have before you, 'Princeton changed my life,'" she said.

She went on to describe the hallmark of a Princeton education: A greater emphasis on developing lifelong habits of critical thinking than on acquiring a large body of knowledge. While both are important, she explained that having a "disciplined and curious mind" enables people to acquire the information they need and to explore all sides of an issue.

She told the students that they will be led on their Princeton journey by faculty members who are leaders in their fields. "They will pose questions that matter and teach you how to dig deep for the answers, beyond the material in your textbooks and the wonderful world of Google," she said.

Tilghman also encouraged the freshmen to take advantage of opportunities outside the classroom, including with the more than 200 student organizations at Princeton. And she suggested that the students look beyond those who "act and think like you" for friendships.

"Never again will you live with a group of peers that was expressly assembled to expand your horizons and open your eyes to the fascinating richness of the human condition," she said. "After all Dean of Admission Janet Rapelye could have saved herself and her colleagues a great deal of time and effort by admitting the first 1,223 applicants who were class valedictorians, or the first 1,223 with double 800 SAT scores, or 1,223 from the state of New York.

"The reason she took such care in selecting all of you -- weighing your many talents, your academic and extracurricular interests, your diverse histories -- was to increase the likelihood that your entire educational experience, inside and outside the classroom, is as mind-expanding as possible," Tilghman continued. "When you graduate you will enter a world that is now truly global in perspective, and in which success will require that you have a cosmopolitan attitude. You must be equipped to live and work in not one culture, but in many cultures."

"I hope you will acquire the spirit of Princeton and all that this place aspires to teach you -- a determination to follow your passions in service to the common good, a respect for tradition and for progress, an openness to new ideas, the courage to stand up for your beliefs and the rights of others, a global sensibility, and a lifelong devotion to justice and freedom, all informed by the highest standards of integrity and mutual respect. To do so, you will need to aim high and to be bold."

The text of President Tilghman's full address is available online.