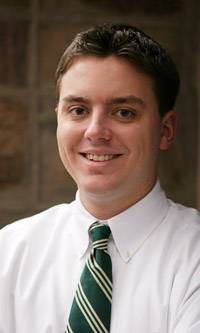 Jeffrey Miller, a Princeton senior who aspires to become a novelist and English professor, has been awarded a Rhodes Scholarship for graduate study at the University of Oxford in England.

An English major from Plano, Texas, Miller was one of 32 American students chosen for the prestigious award, which provides funding for two or three years of study at Oxford. He will spend his first year pursuing a master's degree in English literature from 1550 to 1780 -- focusing on the work of John Milton and other writers of the Restoration period -- and then hopes to begin working toward a doctorate in English.

Noting that Milton's work was shaped by England's history, Miller believes that the opportunity to study in that country will be "an incredible experience, one that could not be matched or replicated anywhere else."

Miller's passion for writing has been inspired by Milton, who was a bitter opponent of the English monarchy. Milton completed "Paradise Lost" and other major works after Charles II was restored to the English throne in 1660 -- a period in which the author questioned his own usefulness to his country.

"I find it wonderfully inspiring that Milton, to the end of his days, believed that the answer to this question lay in writing. His entire life, in fact, can be seen as a sustained testament of faith in the salvific power of the written word," Miller wrote in his Rhodes application essay.

Miller wants to dedicate himself to writing and teaching "because I am willing to suspend my disbelief and believe, like Milton, that literature may be the one thing that saves this world from itself, and failing that, which it well may, because I am certain it is one of the things that makes this world worth trying to save in the first place."

"I think he's going to have a very exciting career. If he wants to be an academic, I see him as a future leader," said Smith, who taught Miller and two other undergraduates in a graduate seminar on Milton last year and served as adviser for his junior paper on Milton.

Miller, who also is pursuing a certificate in creative writing, has studied with novelists Edmund White, Chang-rae Lee and Joyce Carol Oates at Princeton. "He is definitely in the top 2 percent of students I have taught over the years," said White, who directs the creative writing program and taught Miller in a workshop last year.

"He is a soft-spoken, thoughtful man of fine character. In class he was always responsive to other students' work and mostly supportive (except when criticism was more appropriate). Sometimes I felt he was co-teaching the class with me," White said.

Lee added, "Jeff is an impressive, multi-talented young man with a persistent and probing intellect, and possesses as well a deep artistic curiosity and wonderfully mature sense of enduring humanistic concerns like family, honor and love."

Miller is an officer of Ivy Club and a member of the Human Values Forum, and has served as co-editor-in-chief of Green Light Magazine, a campus literary publication. He also played junior varsity basketball. In addition, Miller has been a volunteer basketball coach and volunteer English teacher for disadvantaged youths in the Dallas area.

"Jeff Miller is the kind of student who doesn't come along very often. He has a precocious literary sensibility, a starry-eyed love of writing and writers, and a mind open to and interested in all points of view," said Deborah Nord, a professor of English who taught Miller as a freshman in a course on the 19th-century British novel.

"I was immediately struck by the extent of his knowledge -- he appeared to be better read than some of my graduate students -- and by his talent," she said. "His record over the years and his continuing engagement with literature, as critic, fiction writer and journal editor, have delighted but not surprised me. Jeff will take every advantage of study at Oxford and continue to amaze us in the years to come."

Miller was chosen for the Rhodes Scholarship from among 903 applicants from 333 colleges and universities nationwide. Winners are selected on the basis of high academic achievement, integrity of character, a spirit of unselfishness, respect for others, potential for leadership and physical vigor. The awards were created in 1902 by British philanthropist Cecil Rhodes.