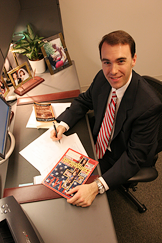 D. Michael Lindsay, a doctoral student in sociology, has conducted a comprehensive study on the role of evangelicalism in the realms of American politics, business and culture.

From the March 27, 2006, Princeton Weekly Bulletin

Is there a “hidden hand” behind the rise to power of the evangelical movement in America over the last three decades? A Princeton graduate student has gained international attention by answering this question in the largest and most comprehensive study on the significance of faith in the lives of America’s societal leaders.

D. Michael Lindsay, a doctoral student in the sociology department, interviewed more than 350 people, including two U.S. presidents, many high-ranking Cabinet officials, numerous CEOs, and a cadre of Hollywood producers and other cultural leaders for his work, titled, “A Vision for the Center: Elite Refashioning of American Evangelicalism.”

“This dissertation is giving us an entirely different look at evangelical Protestantism,” said Lindsay’s adviser, Robert Wuthnow, the Gerhard R. Andlinger ’52 Professor of Social Sciences. “Academics often think of conservative Christians as rubes and dupes. The reality is that the real movers and shakers behind the evangelical movement are highly educated, thoughtful people with entrepreneurial skills, wealth and extraordinary management savvy.”

“This elite cohort,” Lindsay said, “represents the ‘hidden hand’ of evangelicalism and has exerted significant, often understated influence in changing the movement’s direction, scope and strategies over the last 30 years.”

The project is the largest empirical study ever conducted on religion in the lives of societal leaders in the United States, according to Princeton Professor Emerita of Sociology Suzanne Keller, one of the world’s leading authorities on elites. “This study is unique in its scope and focus, and it addresses an extremely timely subject,” Keller said.

Lindsay targeted evangelicalism because it is a group that has made astonishing gains in power and influence. “Since 1976, every person who has won the White House has been identified with the evangelical movement,” he observed. Today, evangelical Christians account for about a quarter of the U.S. population, according to most pollsters.

Lindsay said his study was likely to be an eye-opener once it is officially completed this summer. “I think my project will be a real ‘aha!’ moment for a lot of people. I think people will say, ‘This makes sense. Now I understand why this segment of society has risen in prominence and why they receive so much public attention.’”

Already Lindsay’s work has begun to garner global acclaim. A paper based on his dissertation research recently bested work by 167 other sociologists — many of them tenured faculty — to win the fourth Worldwide Competition for Junior Sociologists, sponsored by the International Sociological Association.

It is quite a distinction for a graduate student to win this award, which will be officially presented to Lindsay this July in Durban, South Africa, at the World Congress of Sociology, said the competition coordinator, Kenneth Thompson, a visiting professor at Yale and emeritus professor of the Open University in the United Kingdom.

“This prestigious competition has previously been won by rising young faculty from a variety of countries, who have subsequently gone on to become famous names in sociology,” explained Thompson. “Lindsay’s research was praised by the jury for its theoretical and methodological sophistication, as well as its topicality and relevance.”

The paper that won the international sociology competition is titled, “Liminal Organization in Elite Ranks: Linking Societal Power to Religious Faith.” It studies the role of an organization called The Fellowship, which has ties to the evangelical movement and has been important to the nation’s elite. Every president since Dwight D. Eisenhower — Democrat and Republican — for example, has attended the group’s National Prayer Breakfast, held every February. Yet the group remains largely unknown to most Americans.

Lindsay argued that The Fellowship’s mysteriousness is precisely what gives it the power it has, and in his paper called this quality “organizational liminality,” drawing on the work of Victor Turner, an acclaimed anthropologist who studied rituals among African tribes.

“Turner applied this notion of liminality to temporal stages in various rituals,” explained Lindsay. “And just as he found liminal stages in life and rituals to be extremely powerful, I also argue that liminal organizations — like The Fellowship, which is neither a church, nor a social club, but something in between — are endowed with ambiguity and a mystique that is both enchanting and powerful.”

In his paper, Lindsay described The Fellowship’s “anti-institutional ethos”: all full-time employees are called “associates”; there is no hierarchical structure; meetings are held in private residences; and even the name of the group is regularly changed, so that today The Fellowship is called the International Foundation.

Interestingly, it is the group’s “organizational liminality” that allows it to “slip under the radar screen of media scrutiny,” a quality that is very attractive to the elite, Lindsay said.

At the group’s prayer breakfasts and other meetings, political, cultural and business leaders mingle and talk about the spiritual issues that unite them. “We would share our personal concerns and trials and tribulations with children and family. But we never did any business,” former Secretary of State James Baker was quoted as saying in Lindsay’s paper.

Nonetheless, the organization has wielded surprising power, with some Fellowship insiders confiding to Lindsay that the group has had an impact on “international diplomacy borne of religious conviction,” serving as a kind of “underground State Department.”

Jimmy Carter, for example, told Lindsay that The Fellowship’s leader, Doug Coe, played an important role in the Camp David Peace Accords: “When I got to Camp David with Begin and Sadat, Doug Coe suggested that the three of us should issue a worldwide call for prayer ... (and) that was the first thing that we did.”

Lindsay first became intrigued about the study of societal leaders after he assisted Keller in teaching a popular class on “Elites, Leadership and Society.” In preparing for the course in the spring of 2002, Lindsay got his big idea. “I realized that nobody has focused on religion in the lives of the elite,” he said.

Lindsay, who holds a master’s degree from Princeton Theological Seminary, chose modern American evangelicalism, a relatively new religious movement that most scholars agree only dates back to 1942, because of the group’s rapid ascendancy on the public stage in recent decades.

Lindsay said he first became interested in studying evangelicals while working as a consultant for religion and culture at the Gallup Organization. Later, in 1999, Lindsay co-wrote a book for Gallup on religious trends in the United States and subsequently caught the attention of Princeton’s Wuthnow when he attended one of the professor’s seminars. “He displayed a strong interest in the social factors influencing religion, so I suggested he think about applying to our Ph.D. program in sociology,” Wuthnow said.

Lindsay’s dissertation research starts with the 1976 election of Jimmy Carter, the first president to call himself a “born-again” Christian, and traces the movement’s development until 2006. Three different elite realms were examined: politics; business; and what Lindsay broadly terms culture — media bigwigs, Hollywood professionals, sports celebrities, entertainers and even a college professor. Nearly 100 of those interviewed were presidents, CEOs or senior executives at large firms, which Lindsay said was no surprise.

“It’s a very entrepreneurial religion,” he explained. “Evangelicals don’t have a pope, they don’t have any centralized authority. But they are an ambitious lot. Almost all of the mega churches in this country are evangelical, and somebody has to pay for those churches to thrive.”

To conduct his research, Lindsay spent three years, from 2003 to 2006, crisscrossing the country, visiting 75 different sites and conducting all 352 interviews himself. He raised $120,000 to pay for the study, much of which came from grants provided by Princeton University, as well as other organizations including the Earhart Foundation and the National Science Foundation.

Gaining access to such a distinguished group is what can make such studies notoriously difficult to undertake, but Lindsay said he got lucky: He had a friend whose family knew President Jimmy Carter. “He was my big break,” Lindsay recalled. “When someone of President Carter’s stature agrees to be in your study, it gives you instant access. It just opened up a lot of doors, and I owe a great deal to him.”

People were included in Lindsay’s project in one of two ways. Either they defined themselves as an evangelical, or born-again Christian, or they passed three criteria: Each participant had to believe in the primary authority of the Bible (as opposed to, for example, the teachings of the Vatican); they had to have a “personal relationship with God through Jesus Christ” — the born-again experience; and they had to have an “activist approach to faith.”

Lindsay argued that faith-based activism has helped the evangelical movement grow from a largely grassroots organization associated with the poor and disenfranchised into the powerful force that it is today. “Religion has this binding power over people’s lives,” said Lindsay. “It’s even more powerful a factor in unity than race or education or socioeconomic status. What I’ve found in my research on the evangelical movement is that shared religious conviction unites members across many social boundaries, from Hollywood to Silicon Valley to Washington.”

Lindsay, who next fall will join the faculty at Rice University, said he hopes to “re-invigorate the scientific study of elites” in further research. “Sociology needs to be dealing with important topics, and I’m passionate about making that one of the things I try to do. I want to be one of those people who contributes to big ideas.”