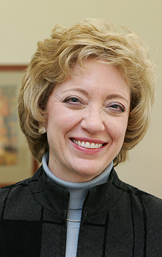 She will succeed Joseph Greenberg, a 1977 Princeton graduate alumnus who died in November 2005 after 27 years of service in the registrar's office at the University, the last six as its leader. Since Greenberg's death, Vice Provost for Institutional Research Jed Marsh has been overseeing the day-to-day operations of the office, working in close collaboration with the senior management team assembled by Greenberg.

A 1973 cum laude graduate of Westhampton College at the University of Richmond with honors in psychology, Griffin earned a master's degree in counseling and rehabilitation from West Virginia University in 1975. After a year as a staff psychologist at a mental health center in Martinsville, Va., she began her career in university administration in 1976 at Wingate College in Wingate, N.C., serving first as assistant to the president and subsequently as registrar and director of international programs. In 1987 she moved to Davidson College in Davidson, N.C., where she served for five years as assistant to the vice president for academic affairs, followed by seven years as registrar. She took up her current position at Dartmouth in October 1999.

Griffin's responsibilities at Dartmouth match closely the portfolio she will hold at Princeton. As the academic officer responsible for planning, organization and record-keeping of instructional activities, she coordinates student records management, course and class scheduling, grading, transfer credit approval, degree certification, faculty elections, and academic calendar and catalog preparation. She also manages the interface between the registrar's office and information technology support; advises deans, department chairs and faculty committees on academic policy issues; and interprets and implements federal laws and guidelines with respect to student records maintenance and release.

Griffin has participated in the development and implementation of Web-based academic services for students and faculty, including course selection, add/drop, check-in, enrollment planning, grade viewing, graduation planning, advising, address maintenance and class rosters. She initiated and directed a classroom planning project that reviewed classroom utilization, specified technological and instructional standards, and resulted in a master plan to guide continuing investment in classroom facilities at Dartmouth.

A member of the American, New England and Southern Associations of Collegiate Registrars and Admission Officers (AACRAO, NEACRAO and SACRAO, respectively), Griffin currently serves on the Public Policy Task Force of AACRAO and the Records and Registration and the Nominations and Elections committees of NEACRAO.

Dean of the College Nancy Malkiel, who led the national search for the new registrar, said, "Polly Griffin brings to Princeton extraordinary breadth and depth of experience as a collegiate registrar. She is fully familiar with the challenges and opportunities facing our registrar's office, and she is deeply versed in the best practices of the profession. A proven leader with exceptional management skills, the highest standards and an outstanding record of service to students and faculty, she is just the right person to build on Joe Greenberg's legacy and take the registrar's office to new levels of effectiveness in the years ahead."

In her letter of application for the position, Griffin wrote, "Joe Greenberg was my friend and steadfast colleague," and she noted that her "respect for Joe and for the staff that he assembled and so admired" made the prospect of leading the registrar's office at Princeton "particularly special."

She said of her new appointment, "Princeton is focusing on issues fundamental to higher education in this country and hence the world. Doing my part to participate in and support these important institutional conversations is professionally and personally compelling, and I anticipate with pleasure taking up the exciting work of the registrar at this time in the life of the University."