Clinton urges seniors to use 'personal power' for global good

Former U.S. President Bill Clinton gave the keynote address at the 2006 Class Day ceremony. He urged the seniors to make a positive difference in an increasingly interdependent world.

Above left:  Seniors and their families gathered on Cannon Green behind Nassau Hall for the event. 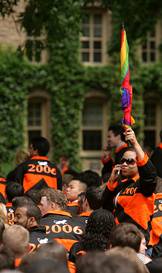 A colorful umbrella and a cell phone helped this senior find her family in the crowd. 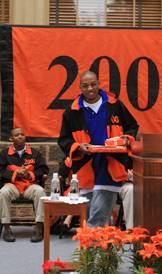 Below left: President Clinton was made an honorary member of the class of 2006 and presented with a class jacket following his address. He is pictured with, from left, Class Day Chairs Lauren Bush, Harrison Frist and Shaun Callaghan and Senior Class President Chris Lloyd.

Bottom left: Senior Ben Fast emerged at the end of his comic address as "Princeton Man."

Former President Bill Clinton, addressing Princeton's graduating seniors at Class Day on Monday, June 5, challenged them to apply the "unprecedented personal power" they have gained through education to serve an increasingly interdependent world.

Clinton described global opportunities and vulnerabilities in the 21st century -- from economic, technological and cultural advances to the dangers of terrorism, poverty, disease and climate change -- in urging members of the class of 2006 to make a positive difference.

"You have an education that has given you unprecedented personal power, and you live in a time which has given you unprecedented personal power," Clinton said. "That means you've got a lot of responsibility. It also means if you do it right you'll live in the most exciting, interesting time in all of human history. It's yours to make, and I hope you will."

Class Day is held on Cannon Green the day before Commencement as a celebration of Princeton seniors' achievements. In addition to Clinton's address, the event included student speeches and the presentation of awards for leadership, athletics and community service.

"Class Day is a time for you to recall your four years together, the friendships you have formed and the impressive things you have accomplished," Princeton President Shirley M. Tilghman said. "… You have become a class forever branded with the new last name: '06." 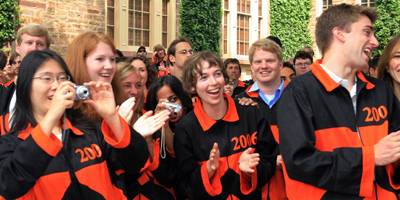 Leaders of the senior class selected Clinton to deliver the keynote address from among numerous nominees suggested by classmates. "Since being out of office, President Clinton continues to change the world through the Clinton Global Initiative and the Clinton Foundation, which seek solutions to some of the world's most pressing issues," said senior Lauren Bush, a Class Day co-chair. "Because of President Clinton's charismatic personality, political legacy and humanitarian spirit, we are so honored to have him here today."

Clinton recalled delivering Princeton's Commencement address in 1996, when the University celebrated its 250th anniversary and expanded its informal motto, "Princeton in the nation's service," to include "and in the service of all nations."

That change was "made in recognition of the interdependent world in which all future graduates would live," Clinton said. "Today I want you think about that all over again."

Clinton told the seniors that three trends over the past decade -- the expansion of democracies around the world, the development of the Internet as a communication tool and the increase in nongovernmental organizations -- "have conspired to give you and your classmates and your contemporaries more power as private citizens to do public good than any group of people in all of history."

While laying out his own vision for the future, Clinton encouraged the students to think about the nature of the world in the 21st century, how it could be improved and the role they could play in "making a world with more partners and fewer adversaries."

"I can't tell you what you should do," he said. "I can only tell you that if you have power you have a responsibility to use it, and you cannot walk away from it. And since you live in an interdependent world, you cannot get away from its adverse consequences -- you can only try to minimize them, ultimately erase them and maximize the potential before you.

"The governments of the world will have to do some of this," Clinton said, "but people can do a lot of it -- private citizens, not only of the United States but of any country in the world, doing public good."

As the world grows more economically and technologically interconnected but  disparities in health and wealth are widening, Clinton said, "I would like us to move from unstable, unequal interdependence to more integrated communities -- locally, nationally and globally."

"Every person deserves a chance. Every person has a responsible role to play. Competition is good, but cooperation often works better. Our differences are important -- they make life more interesting, they aid the search for truth -- but our common humanity matters more."

Clinton cited his work with the first President Bush in raising relief aid after the Indian Ocean tsunami and Hurricanes Katrina and Rita as an example of how the need to work for improved living conditions among all global citizens should supercede political, religious or other barriers.

"We still have the differences we had before we started, but we also know where the common ground is," Clinton said of his partnership with Bush. "And as you build bonds of personal affection and mutual respect across lines that divide you, then it becomes harder for people to become so estranged that they can't even hear each other anymore."

Following Clinton's speech, students offered remarks about their Princeton experiences.  Senior Ben Fast delivered a comic address, musing on the similarities between Batman and the former president ("One lives in a bat cave, the other used to have a cavelike structure he could hide in, in case of nuclear annihilation"). Fast remarked that Commencement will mark the culmination of his own lifelong dream to become a superhero: Revealing a large "P" on his T-shirt under his class jacket, he declared himself "Princeton Man."

"Why do you think you wear the gown?" Fast asked his classmates. "It's the closest thing we have in the real world to a cape."

In addition to delivering the keynote address, Clinton was named an honorary member of the class of 2006, along with humorist David Sedaris, who spoke at Baccalaureate; retiring faculty members John Fleming and John Gager; Charles Krank, assistant director of grounds and building maintenance, who has worked with student sponsored programs; and Bob Rodgers, a member of Princeton's class of 1956.

The Baccalaureate service was Webcast live and is available for viewing on the Webmedia site. Princeton's graduation activities culminate June 6 with Commencement ceremonies at 11 a.m. on the lawn in front of Nassau Hall.